Worgan family who all have dwarfism are Instagram hit

A family-of-three who all have dwarfism have become an internet sensation thanks to the heart-warming photos they share online.

Charli Worgan, 27 – who is just 4ft 2in – decided to set up an Instagram account to document their adventures in 2013 which has now attracted thousands of followers across the world.

After marrying her husband, Cullen Adams – who slightly taller at 4ft 6in – and welcoming their first child, Tilba, they’ve been inundated with comments online – most of them positive.

Despite being subjected to online bullies, the couple have continued to post daily pictures of them enjoying themselves to show that they refuse to allow their dwarfism to hold them back.

From days out to the beach, to lunches in the sun, or work outs and walks, as well as updates on two-year-old Tilba’s milestones, the images demonstrate that they are just like any other family.

Ms Worgan is currently pregnant with her second child and will have a planned caesarean on Thursday. The couple admit there are risks to them having children – including fatality – and their new addition could develop respiratory problems. 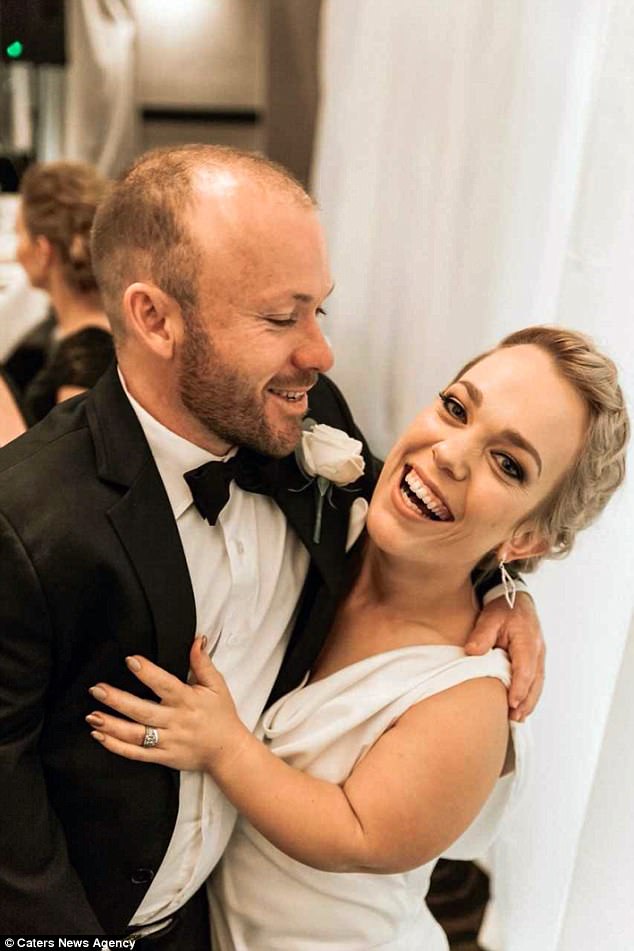 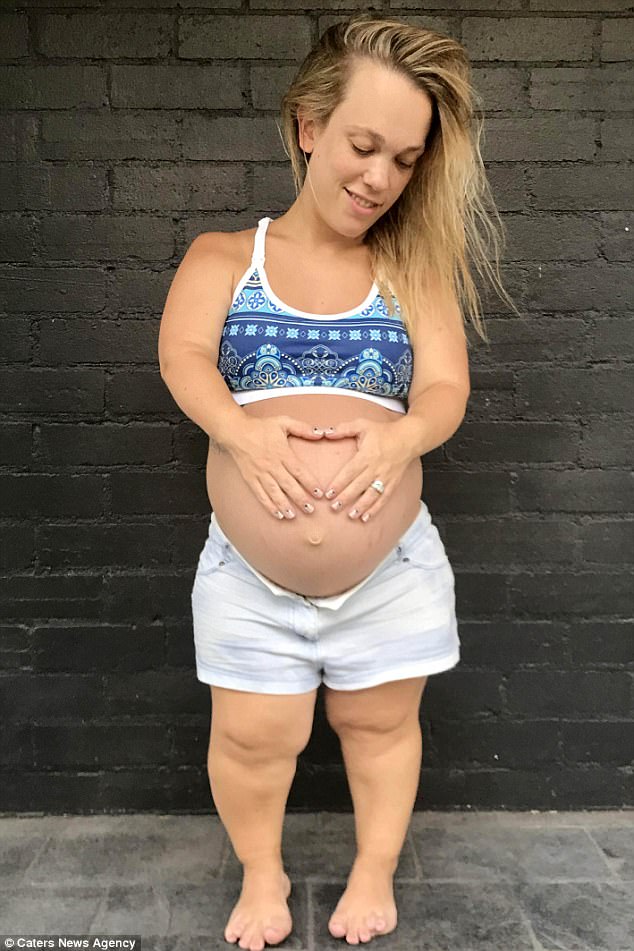 Ms Worgan, from Sydney, Australia, said: ‘We might all have dwarfism but our lives are full of fun and happiness.

‘I like to post photos of us enjoying ourselves as much as possible and before falling pregnant, I was also into my fitness.

‘There’s no limit to what we can do together and we love nothing more than enjoying lunch and days out in the sunshine.’ 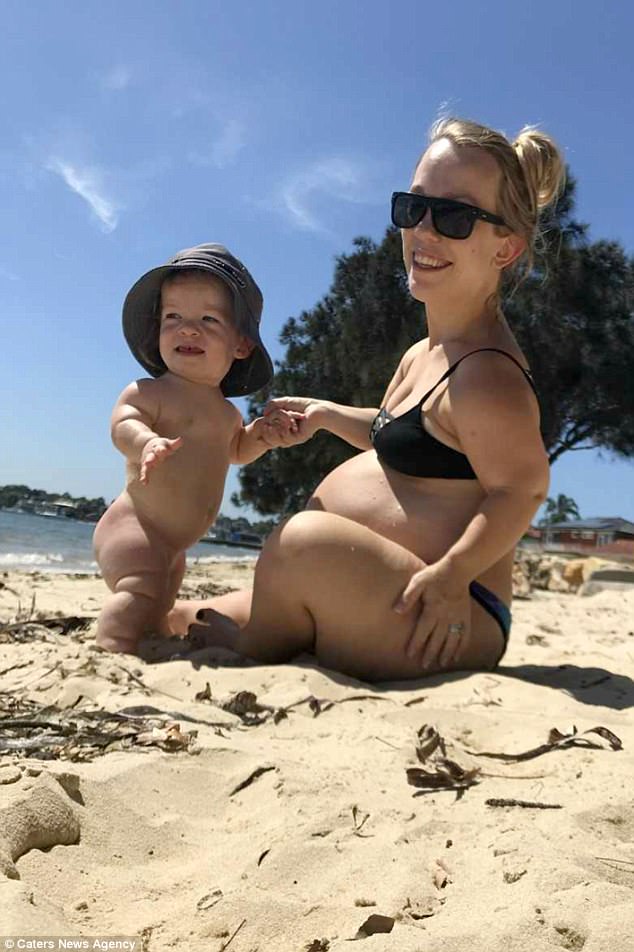 ‘I don’t take my height too seriously’

The business development manager said she also posts photos that show a the sometimes comical side of things when it comes to their height, such as oversized clothes, or general day to day activities that are made a bit more tricky.

‘I don’t take my height too seriously but am always respectful of the short statued community when doing so,’ she explained. 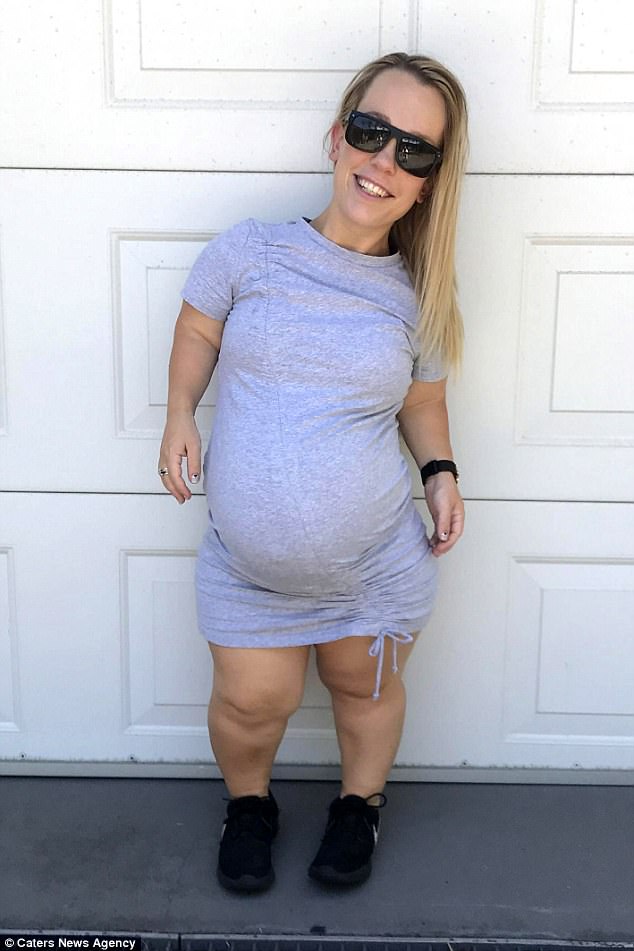 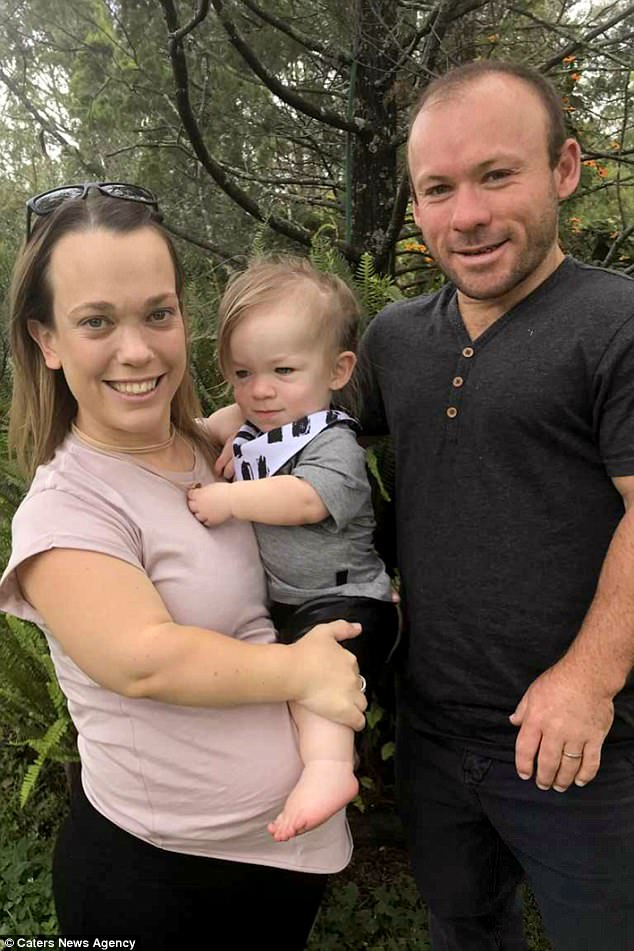 She says their posts do receive nasty comments but she has learnt to rise above them.

‘Everyone loves seeing family photos of us and we always receive such lovely comments from most people,’ she said.

‘We do get some negative people but when you put yourself out there you do half expect it.

‘I have learnt not to retaliate and just ignore and block anyone that insults us.

‘Our following has grown massively since last year and it’s nice that so many people are interested in us.

‘We use our iPhone cameras to take all the photos and try our best to make them as varied as possible.’

The couple tied the knot last May after meeting at a World Dwarf Games team Australia training camp in 2012.

Ms Worgan fell pregnant with Tilba without even trying – but then they faced an  anxious wait for genetic test results to see if their baby would be.

She has achondroplasia, the most common type of dwarfism. Her husband, 38, has geleophysic dysplasia, a rarer form which can cause more health complications. 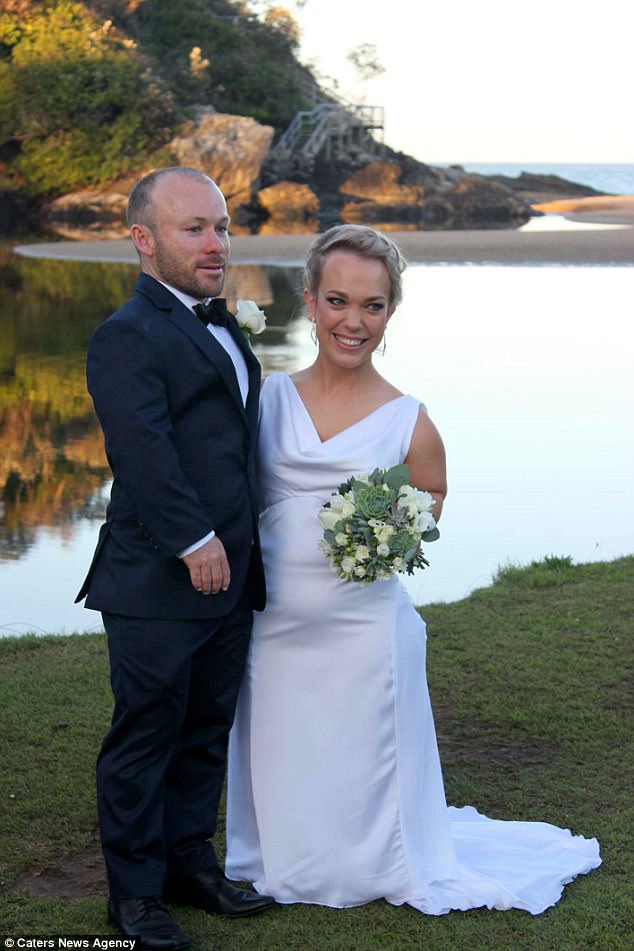 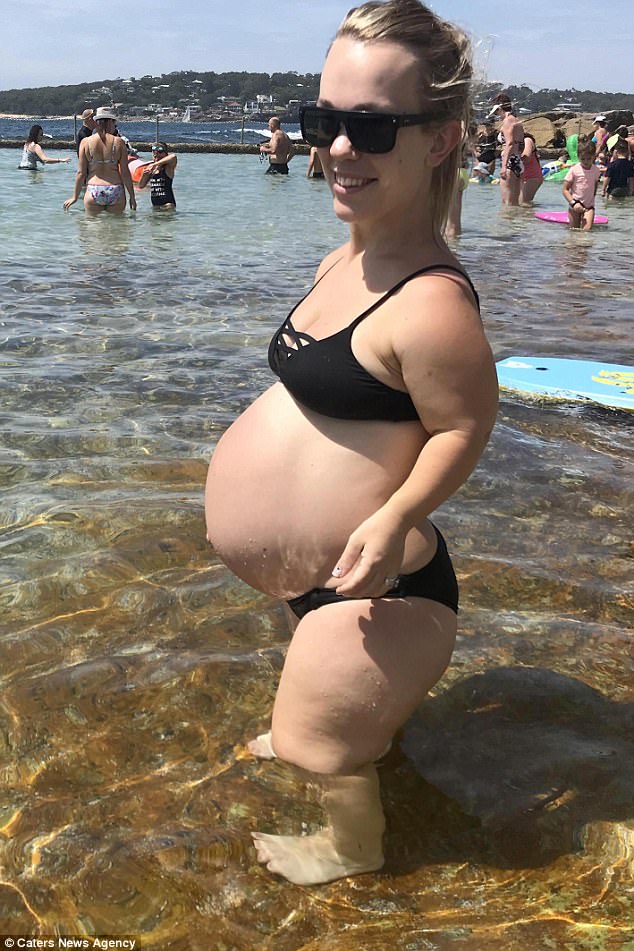 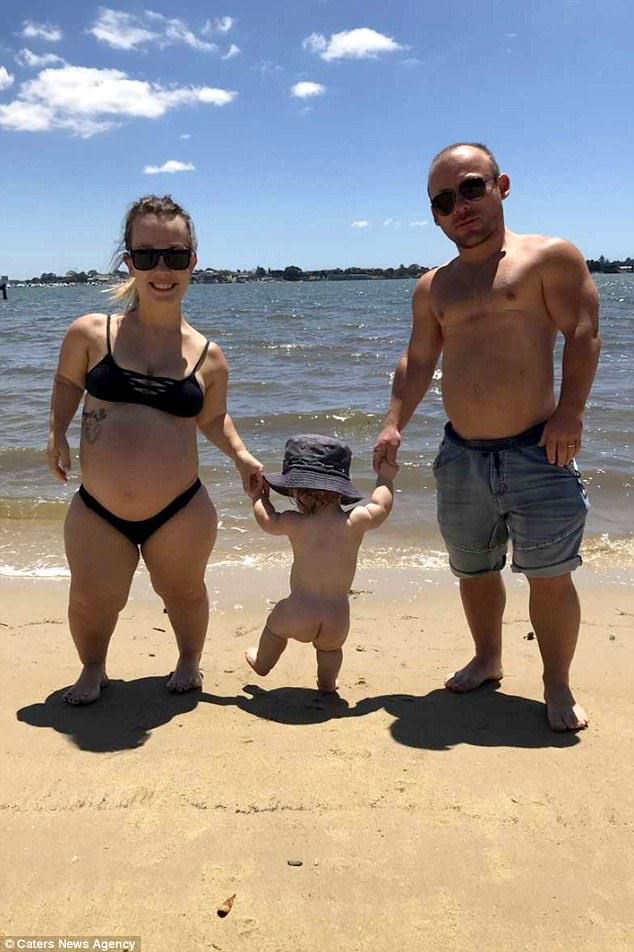 Tilba has achondroplasia form of dwarfism which means she could have spinal issues, but will likely live a healthy life

Restricted growth, sometimes known as dwarfism, is a condition characterised by short stature.

There are two main types of restricted growth:

As well as having short stature, some people with restricted growth also have other physical problems, such as bowed legs or an unusually curved spine.

However, most people don’t have any other serious problems. They can often live a relatively normal life and have a normal life expectancy.

Doctors have told them their children have four potential outcomes: a baby could have her type of dwarfism, his form, it could have been average-sized or if it had both forms of dwarfism this could prove fatal.

It was good news – Tilba has achondroplasia, like Ms Worgan’s mother and brother (her father is average-sized).

Medics warned she could have spinal issues, but otherwise should live a healthy life.

Ms Worgan explained: ‘Our children could have inherited both forms which generally results in a fatal outcome. We had genetic testing done in early pregnancy so we could find this out.

‘We also had a one in four chance of having an average height baby or it having mine or Cullen’s type of dwarfism.

‘Our next baby, which we don’t yet know the sex of, will have Cullen’s type, which can carry more respiratory problems whereas mine is more skeletal.’

Living life to the full

Ms Worgan says she and her husband live life to the max and praised their strong willed parents for their success.

‘We haven’t yet experienced many problems related to our conditions and always ensure we keep ourselves fit and strong by working out in the gym or at home. 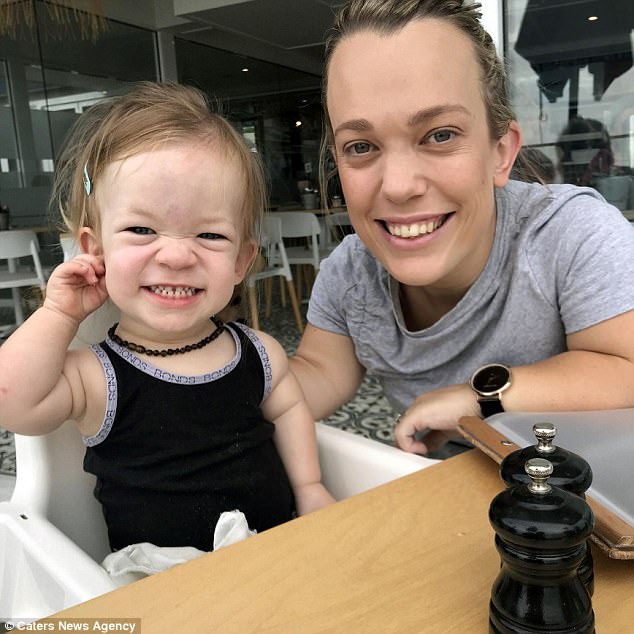 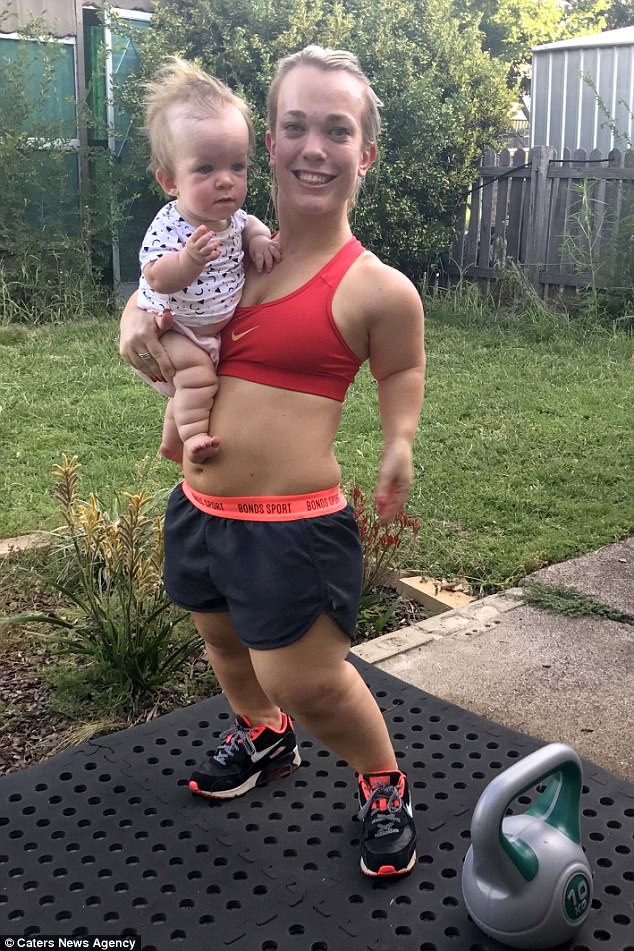 ‘We both have parents who have a no excuse policy, yet have always been supportive and we’ve never allowed our dwarfism to be an excuse for not doing well.

‘My dad is of average height but my mum is short, I wasn’t formally diagnosed with dwarfism until 2015 when I was pregnant with Tilba.

‘Before this we knew I had dwarfism but not exactly what type.

‘Cullen owns his own business, I work for a major telco and we’re about to celebrate the birth of our second baby, life couldn’t be better.

‘I have just started my maternity leave and our baby will be born via caesarean.

‘Our aim with our Instagram page is to reach out to other people and show them that having dwarfism doesn’t need to hold you back.’