World Health Organization is ‘underestimating’ how many people will die each year from global warming as experts dismiss their 250,000 annual death toll

The World Health Organization is underestimating how many people will die because of climate change, experts claim.

Researchers have picked apart the WHO’s warning that global warming will lead to the deaths of an extra quarter-of-a-million people per year between 2030 and 2050.

This translates to approximately one in every 200 deaths – around 55million people die each year – but the true toll is now expected to be significantly higher.

As well as heat stress and malaria, people will also die because of extreme weather events, migration and reduced farm productivity, they said.

And rising temperatures and intense weather around the world will endanger the lives of ‘many millions of people’.

The average surface temperature on Earth has risen by 0.9°C (1.62°F) since the late 1800s, mostly because of carbon dioxide and man-made pollution, according to NASA

Research led by the London School of Hygiene and Tropical Medicine called the WHO’s prediction ‘conservative’ but did not give an estimate of its own.

‘There is also population displacement and a range of additional factors like food production and crop yield, and the increase in heat that will limit labor productivity from farmers in tropical regions that wasn’t taken into account among other factors.’

They said food shortages alone could lead to more than half a million (529,000) adults dying every year by 2050.

And the World Bank estimates 100million more people will be thrust into ‘extreme poverty’ – which the UN defines as deprivation of food, water, sanitation and healthcare – in the next 11 years, putting their lives at risk.

Sir Andrew said governments around the round must take ‘decisive action’ to limit greenhouse gas emissions and tackle the health effects of climate change.

The average surface temperature of the earth has risen by approximately 0.9°C (1.62°F) since the late 1800s, according to NASA.

The space agency says most of this increase is due to carbon dioxide emissions and other man-made pollution – and the rate of warming is increasing. 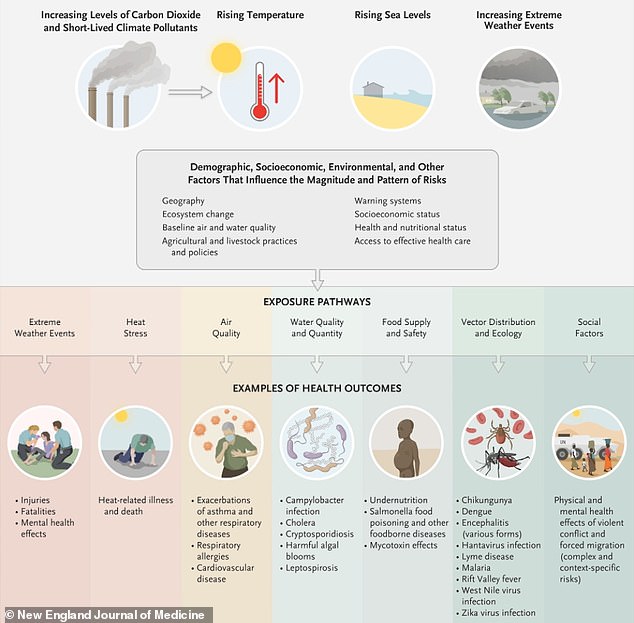 An article written by climate change experts Sir Andrew Haines and Professor Kristie Ebi has predicted ‘many millions’ of people’s lives will be endangered by soaring global temperatures – people are expected to die because of heat-related illness, poor air quality, infected water supplies, malnutrition, and violence triggered by mass migration away from hard-hit areas

Global warming, according to the study, will lead to deaths from injuries in extreme weather events such as hurricanes, and heat-related illnesses.

People are also expected to succumb to lung conditions triggered by poor air quality – pollution tends to be worse in warm air – and less sanitary water spreading illnesses like cholera.

Violence sparked by forced migrations as people try to flee the hottest regions could also take the lives of those in hostile areas.

Deadly insect-borne viruses could also increase, and malnutrition and food poisoning may become more common, according to the report.

Sir Andrew claims the World Health Organization did not take all these factors into account when making its 250,000-deaths-per-year estimate.

The article authors wrote: ‘This is a conservative estimate, because it does not include deaths from other climate-sensitive health outcomes and does not include morbidity or the effects associated with the disruption of health services from extreme weather and climate events.’

And they added: ‘Climate change is causing injuries, illnesses and deaths, with the risks projected to increase substantially with additional climate change, threatening the health of many millions of people.

‘The pervasive threats to health posed by climate change demand decisive actions from health professionals and governments to protect the health of current and future generations.’

Sir Andrew and Professor Ebi’s piece was published in the New England Journal of Medicine.