A van driver who was captured on camera purposely driving into puddles to drench pedestrians has proven that not all Canadians are nice or polite.

The unnamed van driver was caught in the act by a rear-facing dashboard camera while driving through the rainy streets of the Canadian capital city Ottawa on July 27 at 3.25pm.

In the 45-second video, the driver of a white van can be seen purposely drifting right, towards the sidewalk, driving straight through enormous puddles and splashing four out of the five pedestrians seen walking on the sidewalk. 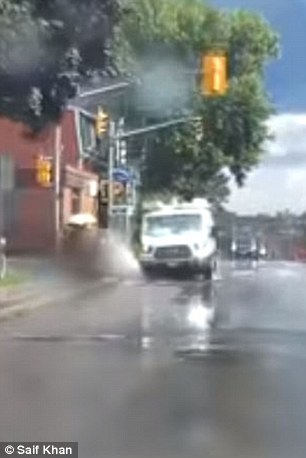 A van driver was captured on camera purposely driving through deep puddles to drench pedestrians. The driver veered right upon spotting targets to soak them

First, the driver drenches two unsuspecting, umbrella-carrying pedestrians as they cross the street.

The driver then straightens his course, driving in the center of the lane, until spotting another umbrella-toting pedestrian, at which point the driver veers right againt to soak the walker, who barely manages to protect himself from the sheet of water heading his way.

After centering the van in the lane again, the driver spots one more target to splash. This time, the puddle isn’t very deep and the pedestrian gets away with just a light spray.

The dashcam video was posted on YouTube and quickly turned into a viral sensation as people — thanks to both the clearly-visible license plate and van logo — rushed to complain about the driver’s antics to the van owners, which turned out to be Canadian contractor company, Black & McDonald. 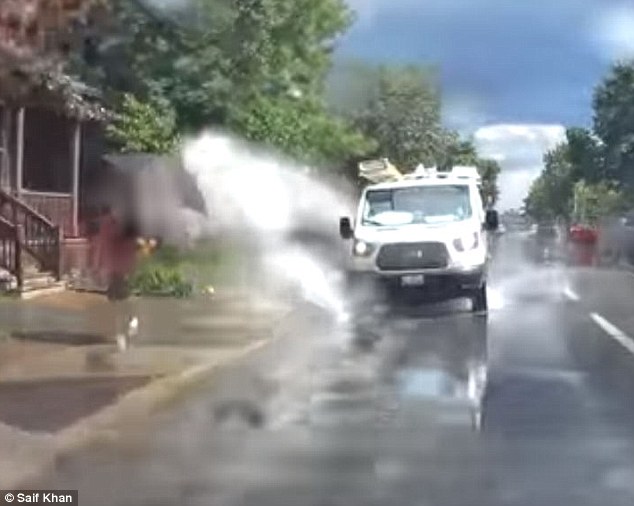 Authorities said the weight of the water soaking the pedestrians could have injured them, opening up the driver to criminal charges of both mischief and assault

Two days after the video surfaced, the owners of the van, contractor company Black & McDonald, revealed the van driver no longer worked for them

On Sunday afternoon, Black & McDonald posted on its official Facebook page that the van driver, who was not named, no longer works for the company.

‘We apologize to everyone impacted by the recent incident in Ottawa of unacceptable driving by one of our van drivers,’ the Facebook post read. ‘We want to reassure the public that safety is our #1 priority. This is an isolated incident and the individual is no longer employed with Black & McDonald.’

Ottawa police Sgt. Mark Gatien told the Ottawa Citizen that the van driver could face criminal charges including mischief or assault because, ‘There’s no doubt it was deliberate’ action.

Gatien said that the weight of the water flying at the pedestrians could have led to injuries, which could warrant an assault charge.

The video has been viewed more than 687,000 times since it was posted Friday.