You CAN die of loneliness: Social isolation could raise chance of premature death by 50%, study says

Loneliness may raise the risk of a heart attack by more than 40 per cent.

A major study published today also suggests that social isolation can increase the chance of a stroke by 39 per cent and premature death by up to 50 per cent.

The analysis is based on the health records of 480,000 Britons – making it the largest study of its kind. Those who already had cardiovascular problems were far more likely to die early if they were isolated, suggesting the importance of family and friends in aiding recovery.

Christian Hakulinen, the University of Helsinki expert who led the study, concluded that having few social contacts was a risk factor for early death, particularly among those with pre-existing cardiovascular disease.

‘The message is that if we target the conventional risk factors then we could perhaps reduce the cardiovascular disease among those who are isolated or lonely,’ said Dr Hakulinen. ‘It is also important we show that those who are socially isolated might have a worse prognosis after a heart attack or stroke.’

Scientists from University College London and Finland tracked the 480,000 Britons, aged 40 to 69, for seven years.

Social isolation was associated with a 43 per cent higher risk of first-time heart attack when age, gender and ethnicity were factored in.

Once lifestyle and socio-economic factors were taken into account, this explained 84 per cent of the increased risk, suggesting the lonely and isolated were most vulnerable to well-known risks.

Similarly, social isolation was associated with a 39 per cent heightened chance of a first-time stroke, but the other conventional risk factors accounted for 83 percent of it. 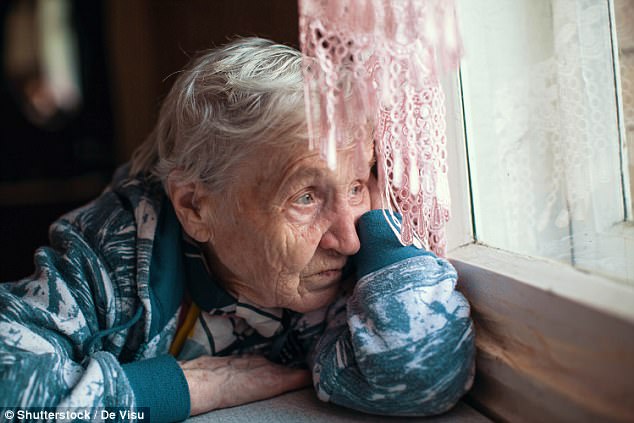 The results were similar for loneliness and risk of first-time heart attack or stroke, according to the study in the medical journal Heart. Those who already had cardiovascular problems were 50 per cent more likely to die if socially isolated and still a quarter more likely to die once known risks had been accounted for.

More than half of all people aged 75 in Britain live alone and more than a million are believed to be suffering from chronic loneliness. Helen Stokes-Lampard, who chairs the Royal College of GPs, said loneliness could have a devastating impact on long-term health.

The professor said: ‘The reality is that loneliness and social isolation, particularly for older people, can be on a par in terms of its impact on health with suffering from a chronic long-term condition and, as this study shows, increase the likelihood of developing serious conditions, such as heart attacks and strokes.

‘On the front line, GPs and our teams report seeing patients on a daily basis whose underlying problems are not primarily medical, but who are feeling socially isolated or lonely.

‘As well as being distressing for patients, loneliness can also have a real impact on general practice and the wider NHS, at a time when the whole system is facing intense resource and workload pressures.’

The college said it was working with charities, community and voluntary groups to draw up a manifesto to present to Government to tackle loneliness.