‘You feel like a naughty child’: School shames bad parkers in newsletter, sends photos to police

Staff at a primary school in New Zealand’s north island have had to take drastic measures to ensure the safety and well-being of all their students.

Shelley Park Primary School, in Auckland, has resorted to naming, shaming and blaming guilty parents who park illegally or dangerously out the front of the school or in neighbouring streets.

According to the Eastern Courier, the East Auckland school is at it’s wits end, and has begun photographing offenders and plastering the incriminating images in the school’s weekly newsletter.

A parent has parked their car, not only facing the wrong way, but in a bus zone (pictured)

School principal, Brian Rolfe, said staff have been tasked with taking the images, with the help of disgruntled neighbours and parents, rather than directly confronting offenders.

They ‘simply take the photos which we send directly to the police.’

One parent divulged on the limited parking spots available close to the school, and other parent’s openness to judge the lucky people who nab the spots. Most of these parents, she said, are at the school up to an hour before the bell signals the end of the day.

‘What makes it their business to tell you off? They make you feel like a naughty child.’

Howick police Sergeant Brett Meale has been involved in attempting to diffuse the situation and has worked closely with the school.

The school’s issues regarding poor parent parking are generally a year-round complaint.

‘However, on rainy days it obviously becomes worse as parents try and drop their kids as close to the school as possible.’

The Howick police and Auckland transport officials are fining people who are doing the wrong thing. 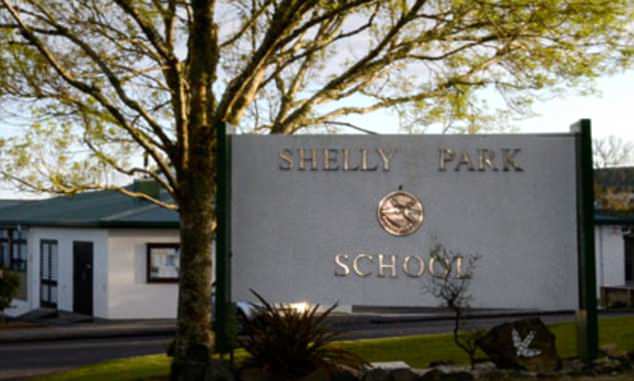 Shelley Park School (pictured), in Auckland, have had to get the police involved

Complaints of bad parking aren’t limited to Shelly Park Primary school, with a list of complaints in Brisbane suburbs continuing to grow in relation to parents double parking, crossing driveways and illegally parking in no stopping or bus zones.

‘We find that by the time we get to this end it’s the P & Cs and the principals saying: ‘please can you send out the CARS (Compliance and Regulatory Services) officers because the parents aren’t listening to us’.’