‘You’ll be a national hero,’ I told Danny Dyer. And so he was

‘I would love to see Piers Morgan do a turn on this year’s show,’ she declared. ‘I’ve told bosses he would be a great signing. I mean, who doesn’t love a good roasting of a weekend?’

The problem is, I can’t dance.

Or rather, I can – but only after I’ve consumed an inhibition-loosening bottle of Jack Daniel’s, which I fear would fall foul of the BBC’s draconian ‘elf and safety’ regulations.

(Ms Ballas’s colleague Bruno Tonioli witnessed me throwing some pretty nifty JD-fuelled shapes at my 50th birthday party, and was very complimentary, although he himself was so inebriated that he was stripped to the waist in a sailor hat, so his judgment may have been impaired.)

I’m absolutely ready to humiliate myself on national television.

But my non-negotiable fee is £100 million. Cash.

But it was EastEnders star Danny Dyer who grabbed all the headlines for his brutal takedown of former Prime Minister David Cameron.

I knew Danny was in a lively mood when he pitched up at our West London studios, marched straight over to me and growled: ‘Oi Morgan, you muppet, what ’ave you been saying about my daughter?’

The truth is, I’ve been repeatedly calling her and her villa mates a bunch of brain-dead zombies, but this didn’t seem a good time to remind Danny of this fact.

‘Just having some fun,’ I stuttered.

‘Well I suggest you don’t ’ave fun at my girl’s expense,’ he snarled.

Danny, who once hosted a series entitled Deadliest Men, leaned in towards me, eyes bulging, neck twitching, fists clenched.

Then he burst out laughing. ‘Had you going there, son…’ he cackled. ‘To be honest,’ he added, ‘you’ve got a point – I didn’t want Dani going in there at first. What father would? But I have to say, she’s done me proud.’

Just before we went on air, I told Danny we’d have a couple of pints of beer put on the desk for us to drink.

‘A bit, but not really. I hate what it does to me, the way it makes me behave. Problem is that once I start, I can’t stop.’

Of course, it was his onslaught against Cameron that blew up the show.

‘I believe Danny was referring to our former Prime Minister,’ I stammered pathetically.

‘Let’s be fair,’ Dyer continued, ‘how comes he can scuttle off? Where is he? He’s in Europe, in Nice, with his trotters up, yeah? Where IS the geezer? He should be held to account for it.’

Then he paused for several seconds before unleashing a second devastating ‘T***’.

(For those not au fait with street lingo, it is either a vulgar term for female genitalia or ‘a stupid and obnoxious person’.)

It was one of those seminal unscripted moments in live television where nobody was quite sure how to react.

Jeremy Corbyn, sitting at the desk with us, sat emotionless but his eyes gleamed with unadulterated joy. Pamela Anderson, next to him, giggled but afterwards admitted she didn’t know what a t*** was. (‘I just knew it must be rude,’ she said.)

The rest of the guests, perched at a separate table, either stared ahead wide-eyed in shock or in fits of laughter. 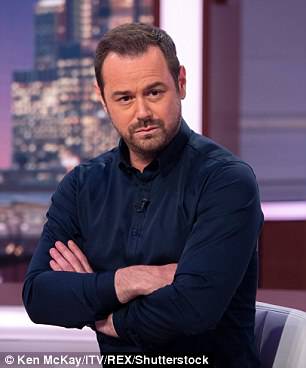 In the commercial break, Danny asked me: ‘Was I all right to say that?’ ‘Of course,’ I replied. ‘I suspect you spoke for a lot of people’

In the next commercial break, Danny asked me: ‘Was I all right to say that?’

‘Of course,’ I replied. ‘I suspect you spoke for a lot of people.’

And so, very quickly, he was.

Prime Minister Theresa May today defended Danny Dyer’s right to call David Cameron a ‘t***’, her No 10 spokesman saying he is ‘perfectly entitled to his opinion’.

Interestingly, it was not an opinion she chose to disagree with…

Eddie Mair, the best interviewer on British radio, has quit the BBC after they demanded he take a pay cut as part of their ‘gender-equality’ drive.

I don’t blame him.

Why should he be punished just because BBC chiefs have systematically waged a shocking and very sexist salary war against women for decades?

To me, true gender equality means women should be paid the same or MORE than men if they are as good as or better than them at the same job.

It doesn’t mean slashing male salaries to soften the self-inflicted shame on your corporate face. That just suggests you still don’t value women the same as men.

Mair, who’s defected to LBC, will now earn a lot more money and the BBC has lost one of the very few stars whose rare brilliance, on its own, made the licence fee worth paying.