You’re at the highest risk of lung disease, according to CDC analysis

The occupations that carry the highest risk of lung disease across the US have been revealed in an official analysis.

Researchers at the Centers for Disease Control and Prevention (CDC) looked at more than 300,000 chronic obstructive pulmonary disease (COPD) deaths nationwide in 2020.

It showed miners were at the highest risk, due to their exposure to toxic airborne dust. Perhaps more surprisingly, waiters, cooks and hotel workers ranked second, likely due to exposure from cooking oil fumes. Builders and construction workers were third.

At the other end, teachers were least likely to suffer the condition, followed by lawyers and financial workers — who typically work in offices, classrooms and after Covid struck from home.

The above graphic shows which jobs had the highest and lowest risk of lung disease, according to data from the Centers for Disease Control and Prevention (CDC) 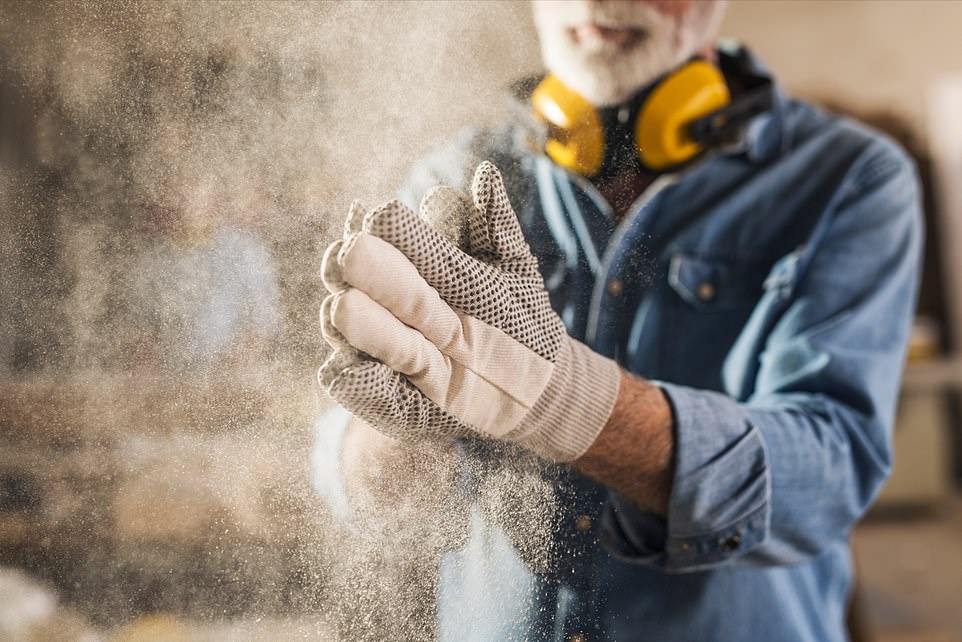 People who work in mining, construction and kitchens have the highest risk of suffering lung disease later in life, CDC experts said. This was because dust from the industries can cause scarring in the lungs and trigger inflammation, leading to problems with airways later in life

In the paper, researchers looked through the National Vital Statistics System for deaths from lung disease in 2020.

Some 3.08million fatalities were recorded in the US, of which 316,023 (10.3 percent) had COPD listed as either the underlying cause or a contributing factor.

COPD describes a group of lung conditions that cause the airways to become narrowed or inflamed, leaving the sufferer with breathing problems. Bronchitis is one of the most common forms.

Deaths were then analyzed and broken down by profession. A rate was found by comparing lung disease deaths to the total number of people employed in each field of work.

Most people in the study were over 75 years old when they died, and the majority were white.

Researchers did not investigate how many individuals also had Covid on their certificate, which can drastically raise the risk of death among people with COPD.

What is chronic obstructive pulmonary disease?

Chronic obstructive pulmonary disease (COPD) describes a group of lung conditions that cause the airways to narrow and become inflamed.

Examples include bronchitis, which affects the airways, and emphysema, which impacts the air sacs.

This makes it harder to move air in and out as you breathe.

Around 12.5million US adults have COPD, while in the UK 1.2million have the condition.

It usually develops due to long-term damage to the lungs from smoking or air pollution.

Jobs where people are exposed to fumes, dust and chemicals also raise the risk.

People in the military and transport and warehouse employees rounded out the top five for fatalities from lung disease.

At the other end of the scale were teachers, who faced the lowest risk of death due to lung problems.

Lawyers, accountants and other professionals, finance workers and those in media and communications were also bottom of the list.

Dr Girija Syamlal, a health scientist at the CDC, and others warned in the paper that exposure to dust, fumes, gasses, vapors and secondhand smoke at work put people at higher risk of lung disease.

A higher likelihood of smoking was also blamed, with the habit also linked to a higher risk of lung disease later in life.

They said: ‘National survey data indicates that workers in these industries have elevated prevalence of [lung disease], higher tobacco use and are frequently exposed to secondhand smoke, vapors, gas, dust and fumes in the workplace.

‘For example, approximately one third of the workers in mining, construction, accommodation and food services… are often exposed to secondhand smoke, diesel exhaust and byproducts of machinery combustion, as well as dusts (wood and silica dusts) vapors and fumes.’

Exposure to cleaners and disinfectants — such as those used in a hospital — also raises the risk of suffering from lung disease, they said.

To avoid the risks they recommended installing and maintaining ventilation systems and wearing face masks that can filter dangerous particles out of the air.

Deaths were not broken down by region, but data showed mining remains a major US industry in Nevada, Arizona and Texas.

The analysis covered 47 American states and Washington D.C., the researchers said, with data from the National Vital Statistics System.

About 12.5million US adults have COPD, estimates from the American Lung Association suggest.

It was published today in the CDC’s prestigious Morbidity and Mortality Weekly Report (MMWR).