YouTube fails to take down violent music videos despite requests

Dozens of violent music videos remain on YouTube despite requests by police to delete them.

Scotland Yard has blamed social media for the rising murder rate in London, singling out the ‘drill’ genre of rap music for glamorising violent crime.

YouTube users can easily watch drill videos that feature masked gangs threatening each other with aggressive lyrics and gestures, with some attracting millions of views. The Met has built up a database of more than 1,400 videos in a bid to identify those involved and monitor tensions among rival gangs.

In the past two years, police have asked YouTube to take down up to 60 videos but they are forced to prove the clips are harmful first. The Google-owned site has only removed just over 30 where they were found to be in violation of its policies.

Met Commissioner Cressida Dick has linked drill videos to at least one attack, which she said describe stabbings with ‘great joy and excitement’. She said web giants had a ‘social responsibility’ to remove content that incites violence.

Some is associated with gangs linked to the murder of Tanesha Melbourne, 17, who was shot dead in Tottenham last month. YouTube said most of the videos flagged up by the Met are no longer available and that it has developed policies to tackle clips related to knife crime.

Detective Superintendent Mike West said the force has been monitoring the increase in the number of videos that incite violence since September 2015.

‘The gangs try to outrival each other with the filming and content – what looks like a music video can actually contain explicit language with gangs threatening each other,’ he said.

‘There are gestures of violence, with hand signals suggesting they are firing weapons and graphic descriptions of what they would do to each other.

‘The Met has got a central database of more than 1,400 indexed videos that we assess and use to gather intelligence.’

He added: ‘Closer partnership work with Google has been developed in the past few months, in order to evolve and increase our capacity to remove social media videos that incite violence, as quickly as possible.’ 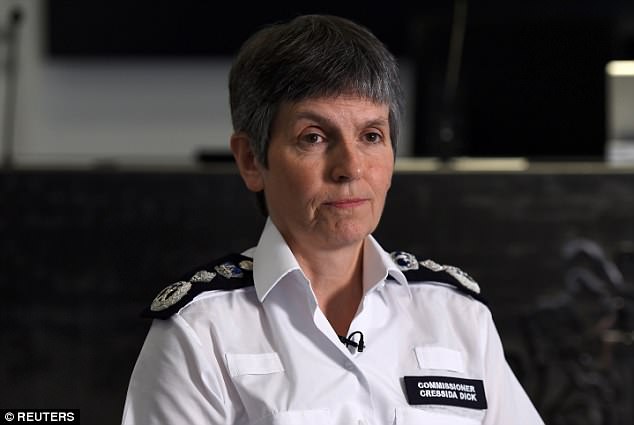 Met Commissioner Cressida Dick (pictured) has linked drill videos to at least one attack, which she said describe stabbings with ‘great joy and excitement’