Jake Paul sat down with Michael Strahan for an interview on Good Morning America on Tuesday, where he spoke about gun reform.

The polarizing YouTube star recently traveled to Parkland in the wake of the massacre that left 17 dead at Marjory Stoneman Douglas High School, and since then has called for changes in gun sale laws.

One of those changes is that all those who buy guns be at least 21, despite the fact that he can be seen posing with weapons and firing off a rifle in two videos from last year when he was just 20.

In one of those videos he also shows off his tattoo – of an assault rifle. 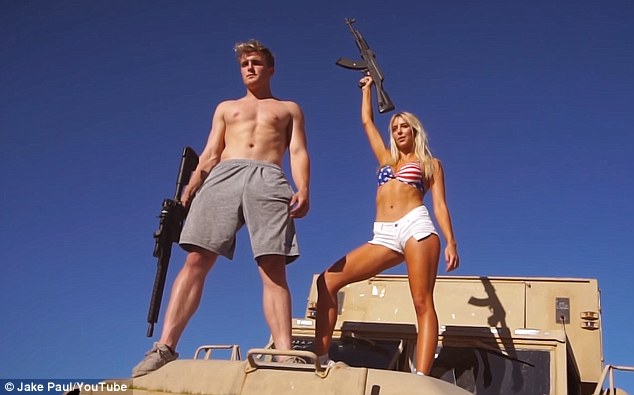 Change: He said that after travelling to Marjory Stoneman Douglas High School in Florida last month he believes laws in this country need to change

‘We have 20 pounds of explosives, and we have machine guns,’ declares Jake in a video released in May 2017, which opens with him and his other friends showing off those aforementioned tattoos.

The group then heads into the desert to blow up a car, but first poses shirtless or in bikinis with their guns, fetishisizing the weapons.

Jake later pretends to fire off rounds with the weapon while also playing with the assault rifle, which he loosely holds with one hand and tosses around.

At no point are there any warnings about the guns or tips on gun safety.

‘I think it is stronger if it is someone like me who has grown up around guns comes out and says we need to limit these things,’ said Jake on GMA.

‘I do think both parties need to come to the middle though and figure out, you know, what is fair for both sides.’

Jake, who is the younger brother of Logan Paul, not only grew up around guns, but has also featured  them in a number of his videos.

Jake explained on the program why he decided to go to Florida and film what would become a 20-minute documentary of himself speaking with students who survived the massacre.

‘You want to be entertaining and want to be funny and that’s what draws people in but sometimes you have to break it down and get real with them and show kids that there’s like problems and there’s other things outside in the world that are happening,’ Jake told Strahan.

‘Because a lot of these kids don’t watch the news on a day-to-day basis.’

He also explained to Strahan that he was able to fit in with the students, which in turn allowed them to open up more in his mind.

‘I’m the same age as them. I went there and spent a day like talking to them and playing video games,’ said Jake.

‘And I don’t think they can relate to someone like a counselor or a therapist as much.’

Jake later said that he wishes the parents of his fans realized just how much he was doing for his young audience with his videos.

‘I look at myself as a role model but imperfect and I’ll make mistakes. That’s more realistic than someone who seems perfect from the outside,’ stated Jake.

‘These kids in school are going through a lot and they’ll get bullied and maybe get a detention. They need to show how to deal with that and think positively and keep your head up. That’s what I try to put out there. ‘ 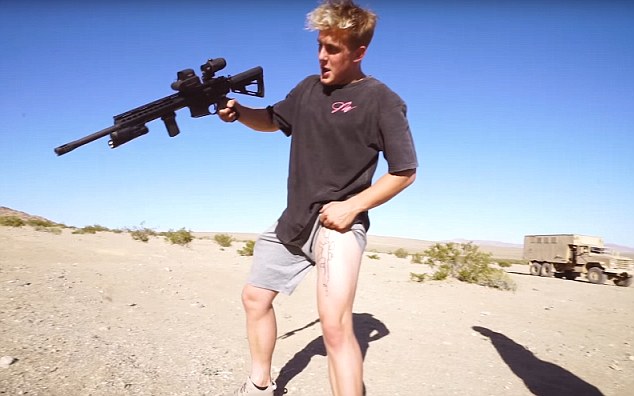 Welcome to the gun show: Jake also said that he was able to get some of the Parkland survivors to open to him better than a therapist or a counselor (Jake above with an assault rifle in May 2017) 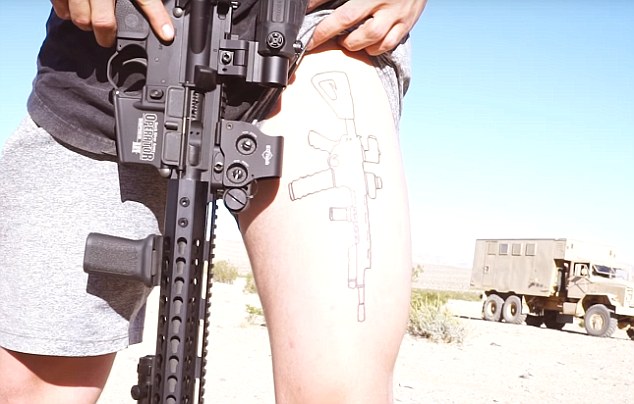 Inked: ‘I look at myself as a role model but imperfect and I’ll make mistakes. That’s more realistic than someone who seems perfect from the outside,’ stated Jake (above showing off his gun tattoo) 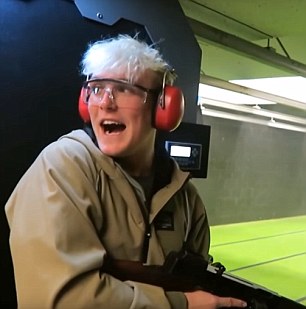 Brother/Brother: In 2017 he filmed a video in which he showed off his assault rifle tattoo and posed with a semi-automatic weapons (Logan Paul left, Jake right)

Logan appeared on Good Morning America last month to ask for a ‘second chance’ after he posting a video which showed the corpse of a dead man who had hanged himself in Japan’s notorious suicide forest.

Paul went on to talk about how hard it was to lose millions of dollars following the uproar over his video, the fact that he is ‘not a horrible person’ and eventually declared that he is a victim.

‘It’s been tough, cause ironically I’m being told to commit suicide myself,’ said Paul.

‘Millions of people literally telling me they hate me, to go die in a fire. Like, the most horrible, horrific things.’

Paul’s decision to film and then post the video led to an immediate uproar, with YouTube removing the footage from its platform and Google Preferred going one step further and dropping Paul.

In the video, Logan Paul is heard saying: ‘You guys got a dead guy in the forest.’

He then addd: ‘I’ve got to say, this is the top five craziest thing I’ve ever seen in my life.’

At another point he even yells in the direction of the body: ‘Yo, are you alive?’

And after asking his friend, ‘What, you’ve never stood next to a dead guy,’ Paul starts laughing.

Paul was quick to suggest that some of the blame in this controversy lies with parents who let their young children watch his videos.

‘I’m going to be honest with you, Michael, I think – I think parents should be monitoring what their children are watching more,’ said Paul.

Strahan had absolutely no comment or push back on that statement, and the interview just continued to move along, this time to the decision made by Google to drop Paul.

This after Forbes reported that he made $12.5 million last year.