YouTuber gets death threats for visiting Disney World while ill

A Disney-obsessed YouTuber and her friend are being slammed as ‘selfish,’ ‘dangerous,’ and entitled’ for staying at Disney World this weekend despite some coronavirus-like symptoms — and the women now say they’ve even received death threats from critics.

YouTuber Tonya Blakey, who is known as That Crazy Disney Lady on YouTube, returned to the Orlando theme park on Friday and Saturday for its grand re-opening with her friend Robin, and live-streamed over ten hours of footage from their day out.

But at one point during the livestream, Robin started to feel ill with what she says was an allergic reaction, with some symptoms that are similar to those of COVID-19. Still, she stuck around at the park, which some social media users are criticizing as a terrible move.

Back in action: YouTuber Tonya Blakey, who goes by The Crazy Disney Lady on YouTube, returned to Disney World for its grand reopening since the pandemic closed it (not pictured) 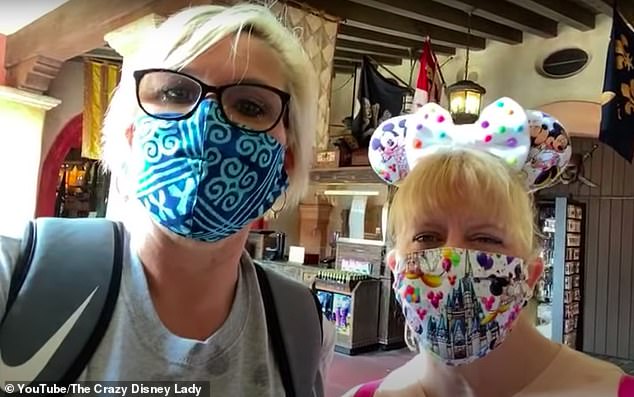 Grown-ups’ day out: The stay-at-home mom live-streamed hours of footage while there with a friend, Robin 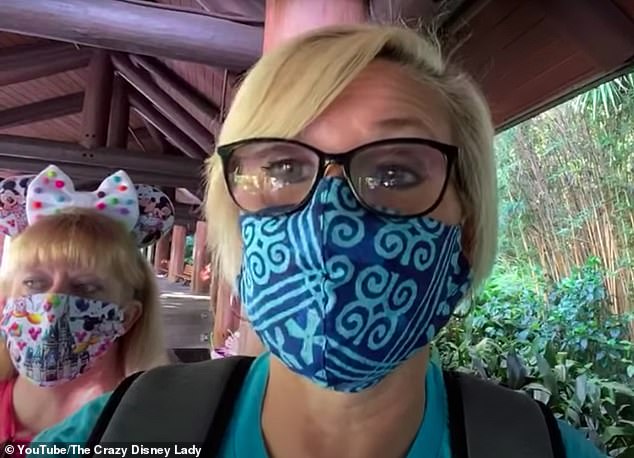 Covered: The pair wore masks for most of their outing in theme park this weekend 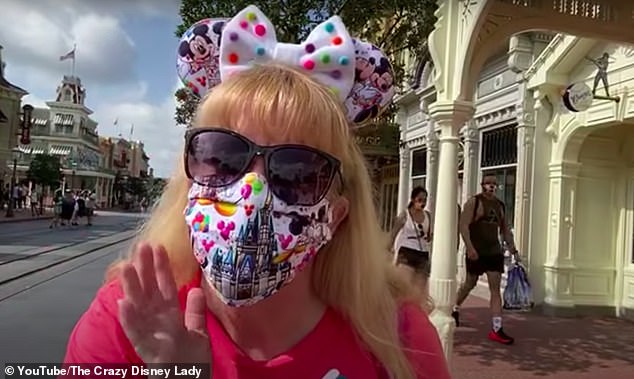 Yikes: At one point, Robin started feeling ill and visited a medic while experiencing shortness of breath and severe vomiting — but says it was an allergic reaction

Tonya, who has 9,500 subscribers, lives nearby the theme park in Florida but wrote that she was excited to be back ‘home’ when the park reopened.

Disney closed its doors in March due to the coronavirus pandemic.

She and Robin returned to the Magic Kingdom on Friday and Saturday, where Tonya filmed much of their visit for her YouTube channel.

Yahoo reports that at one point during the day, Robin suffered an allergic reaction and visited a medic station.

She complained of several symptoms, including a cough, shortness of breath, high blood pressure, and severe vomiting.

However, at the medic station, she opted for Benadryl instead of an EpiPen, and her condition worsened. 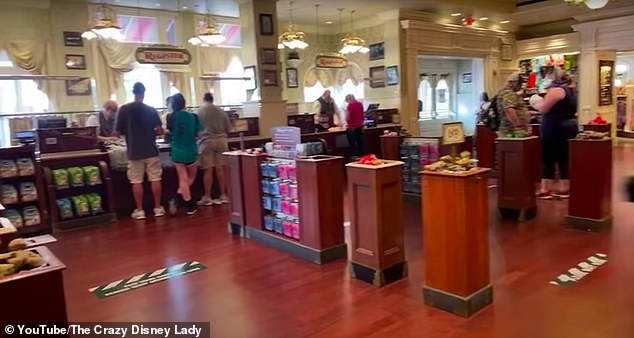 Room: Tonya shared over ten hours worth of footage, showing a much emptier park than visitors are used to 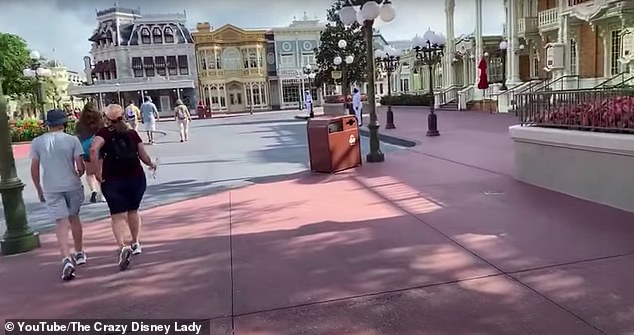 The two left the park for a break but returned later — and came back the next day, too 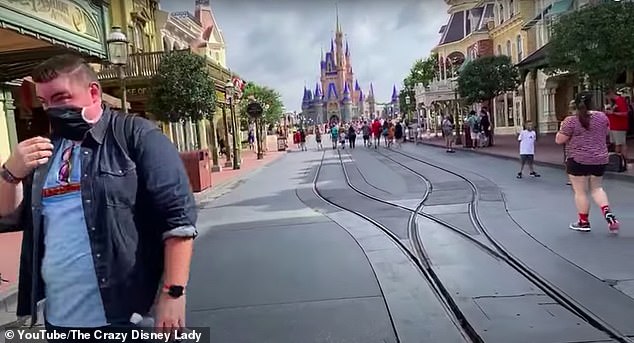 Ouch: When they got back, both complained of sore throats, though they blamed those on screaming on the rides

The two decided to take a break from the park — but not because of fears of the possibility that Robin’s symptoms might indicate another illness.

And soon the pair returned after a quick rest.

When they got back, both complained of sore throats, though they blamed those on screaming on the rides.

The live-stream has been watched by many YouTubers, but it got more attention  when gamer Jenny Nicholson shared concerns on Twitter.

‘She is attributing her symptoms to a tree nut allergic reaction but she took benadryl, saw no change after several hours, and never used her epi pen. The first aid nurses advised that she go to a hospital and she didn’t. They’ve announced they’re visiting Animal Kingdom tomorrow,’ she wrote.

They did, in fact, visit the Animal Kingdom the next day.

‘I’m not saying the channel name and I’m not inviting anyone to go harass these ladies if they find it; I’m sure they’re nice ladies who think they’re invincible and everything’s good. But this is why theme parks shouldn’t be open in a pandemic,’ she went on. 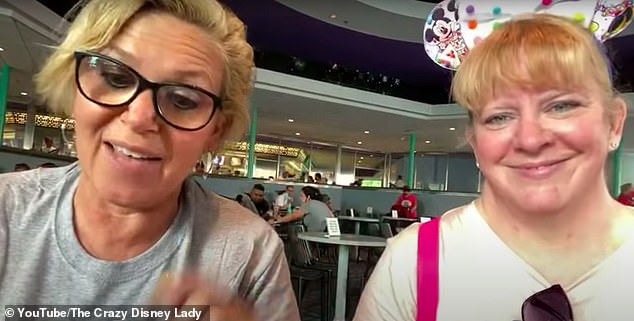 What pandemic? They took their mask off to eat inside in a Tomorrowland eatery 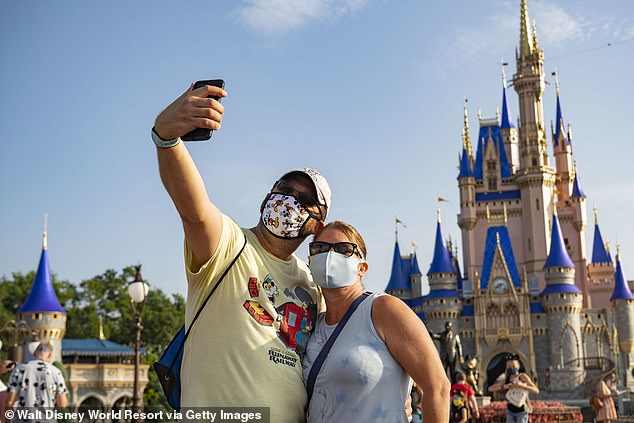 Re-opened: The park had closed in March as the pandemic hit the US (stock photo)

Speaking to Insider, she added: ‘I just wanted to point out: “Hey, when the park is open, it’s always going to be operating on the honor system. And this is part of why it’s not safe to be there right now.”‘

More criticism quickly flooded in, with commenters calling them ‘dangerous,’ ‘selfish,’ and ‘entitled.’

‘You know how in Zombie movies there’s always that one guy who gets bit but doesn’t tell anyone until it’s too late and they end up biting one of their allies instead? That’s this lady,’ wrote one.

‘How they aren’t escorted out and their magic bands flagged is beyond me,’ said another, blaming Disney for non-action.

‘This kind of minimizing and confirmation bias happens ALL THE TIME. Its why people die at home of sudden cardiac arrest when they’ve had chest pain for 2 days “that was just heartburn,”‘ said yet another.

For their part, Tonya and Robin are denying any wrongdoing.

Not impressed: Gamer Jenny Nicholson shared concerns on Twitter about the women’s behavior

Entitled: Others called the women ‘selfish’ and ‘dangerous’, though they deny any wrongdoing

‘If anybody else asks about Robin having COVID-19, you’re going to be not in the group anymore,’ Blakey said.

‘I’ve already clearly stated what was wrong with Robin. Robin would not be in this park if she had COVID-19.’

Speaking to WESH, Tonya claims that they have received death threats from some critics.

‘They were making it out as if we had COVID-19 and we were both sick and we were walking around Disney World, and that is all a lie,’ she said.

‘My YouTube channel is all about positivity and my love for Disney and we never wanted all this negativity to come our way,’ she added. 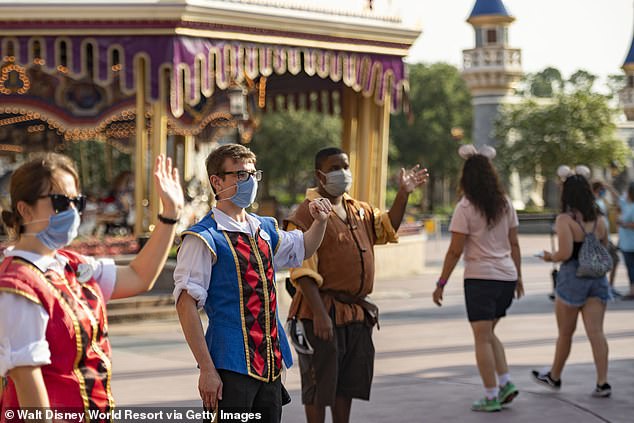 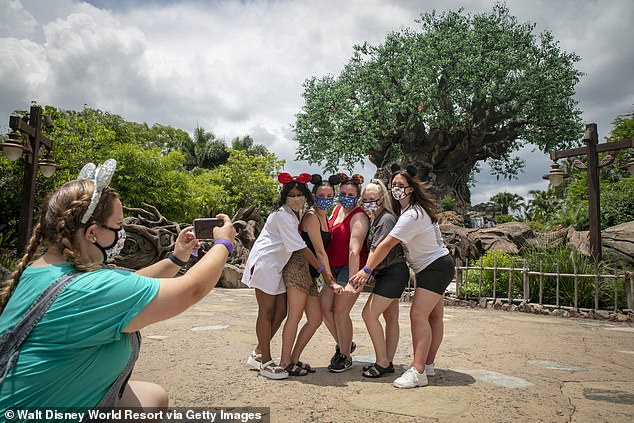 Safety first, sort of… Guests are required to wear masks, though there seems to be little social distancing among guests (stock photo) 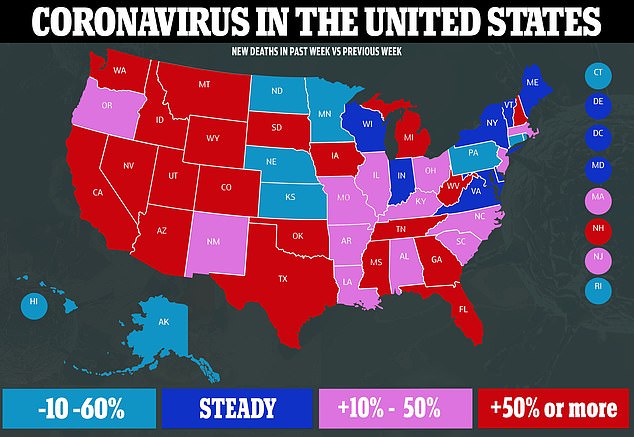 Shocking: Deaths related to COVID-19 have increased across the United States by 46 per cent in the past week with Texas, Arizona and Mississippi reporting the biggest weekly spikes 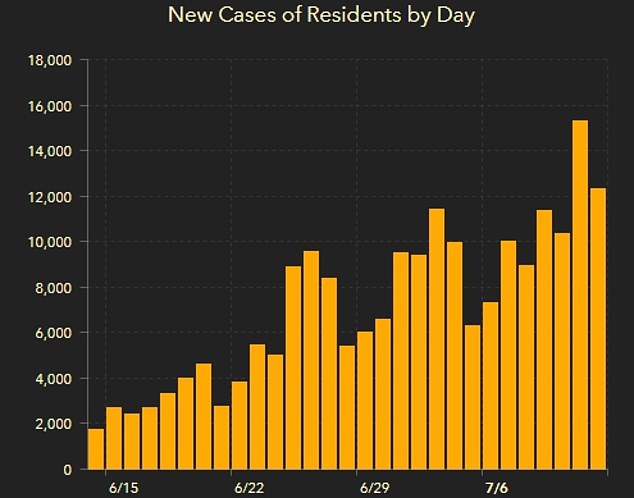 Uptick: Florida added a record 132 fatalities to its death toll on Monday, bringing the statewide total to 4,409. The number of cases increased by 9,194, bringing the total to 291,629

More than 5,000 people died from COVID-19 between July 6 and July 12, which is an increase of 46 per cent compared to the previous week.

A dozen states reported increases in deaths for at least two weeks, including Florida — where deaths surged by more than 60 per cent last week.

Florida recorded 514 deaths in the week ending July 12, bringing total to over 4,300, On Monday the state added a record 132 fatalities to its death toll.