Zinedine Zidane has admitted he is ‘f*****’ after revealing a major selection dilemma with his entire squad fit for the final two games of Real Madrid’s season.

Los Blancos face Villarreal in their last La Liga game on Sunday before taking on Liverpool in the Champions League final next Saturday in Ukrainian capital Kiev.

Zidane did have some fitness concerns over Cristiano Ronaldo and Dani Carvajal but, with both reporting fit for duty, the Frenchman now has his entire squad at his disposal but bemoaned having so many options.

‘Sorry, but I can’t find a better word, because there are players that will stay in Madrid and not come with us for the last two games. That’s the hardest part for me.’

Ronaldo looked to be in good form as he trained in the Spanish capital on Friday with the rest of the squad.

The 33-year-old forward missed Saturday’s 6-0 victory over Celta Vigo — and the 3-2 win over Sevilla in the previous match — with an ankle injury sustained in the 2-2 draw at Barcelona earlier this month.

Five-times Ballon d’Or winner Ronaldo sustained a ‘slight ankle sprain’ after 17 minutes against Barcelona – moments after he levelled the scores at 1-1 – following a collision with Barca defender Gerard Pique and was replaced at the break. 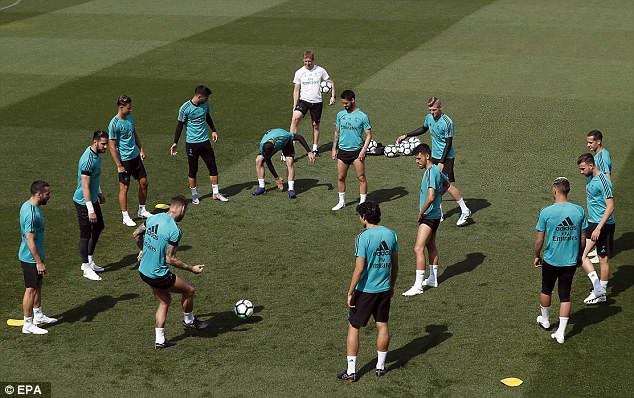 However the Portuguese star appears to be back to full fitness and will be aiming to fire Real to a third consecutive Champions League title.

Zidane refused to admit the clash against Villarreal was a practice for the highly-anticipated European showdown against Jurgen Klopp’s side.

‘Villarreal play out from the back, that’s not how Liverpool play.

‘It’s crucial for us to play a good game, the last one in preparation for the final. Then we’ve got a week to get ready for that game, working on all the details. They’re two very different teams.’