Zoo gorillas have developed their own call to get food and attention from their keepers, new research has found.

It has been dubbed by University of Georgia scientists as the ‘snough’ – because it sounds somewhere between a sneeze and a cough.

This is the first time ‘complex vocal learning’ has been identified in western gorillas, where they learn to make novel sounds when encountering new situations.

Outside humans it has only been found in songbirds, parrots, hummingbirds, whales, dolphins, porpoises, pinnipeds – and recently in elephants.

Lead author Professor Roberta Salmi said: ‘Evidence for the ability to produce novel calls through the imitation of sounds is rare in the animal kingdom.

‘Captive gorilla attention-getting calls resemble a sound between a sneeze and a cough that we named “snough” or AG for “attention getter”.’

Zoo gorillas have developed their own call to get food and attention from their keepers, new research has found. Pictured: Sukari the gorilla at Zoo Atlanta, who took part in the experiment

The findings, published today in PLoS ONE, were the result of a series of experiments at Zoo Atlanta.

Their reactions were then recorded on video over the following 120-second period, and it was found that they vocalised most often when the food and keeper were present together.

They also frequently vocalised using species atypical sounds that were similar to a sneeze and a cough.

These AGs were mostly single noises, but in a few cases were part of a longer series of two to four spaced about a second apart.

Each one lasted about a fifth of a second, and were often accompanied by an exaggerated mouth opening and a gentle but fast repeated slapping or covering of the head or face.

An analysis confirmed they differed acoustically from common gorilla calls such as grunts, that they use as contact calls, and hums, that demand food in the wild.

Frequencies of attention grabbing calls from three gorillas; Kudzoo (A), Macy (B) and Sukari (C). They differ acoustically from common calls like grunts and demands for food in the wild

Analysis of wild male mountain gorillas in Rwanda reveals a male’s drumming noise conveys how big they are.

German researchers also found larger gorillas make a deeper noise when smacking their chest than their smaller peers, and each individual’s thwacking pattern is unique.

It is thought that when silverbacks hit their muscular torsos they are broadcasting their dominance and size to rival males while simultaneously trying to impress females who may be potential mates.

A survey of recordings from other zoos revealed the phenomenon is not unique to Zoo Atlanta.

Video footage of 15 of the individuals showed the call was produced by at least five females and a male housed at four different facilities.

Professor Salmi said: ‘Respondents attributed its use to as many as 33 gorillas housed at eleven different zoos across the US and Canada.

‘These results demonstrate gorillas can modify their calls to produce a novel sound and furthermore confirm they can produce their calls and gestures intentionally to modify the attention status of their caregivers.’

These include soft vocalisations of low frequency, banging or hand clapping, and shaking or waving a body part being some of the most common signals.

The ‘snough’ has not previously been described in the repertoire of wild gorillas, said Professor Salmi.

She added: ‘Our study results indicate it is used specifically to attract the attention of humans, suggesting that gorillas, as other apes, are able to produce novel sounds when encountering novel contexts.’

Eight gorillas were taken to an enclosure separately, and either a familiar keeper, a bucket of grapes or a keeper with a bucket of grapes was stationed a metre away from the pen – in sight but out of reach. Pictured: Chart showing mean number of vocalisations attention grabbing sounds and gestures in the three conditions

The researchers say future work should try to better determine the extent and patterns of ‘snough’ transmission across captive populations.

It could also assess if it is an existing call type, or modulated version, used in a novel context by comparing it to the zoo gorillas’ entire vocal repertoire.

The researchers could not conclude how the AG sound emerged in the gorillas, whether randomly or learned by observing humans.

However they speculate the cough-like sound attracted the attention of the keepers because they are monitoring their health, and the primates could have noted this trend.

Professor Salmi said: ‘These findings represent one of the few pieces of evidence of spontaneous novel vocal production in non-enculturated individuals of this species, supporting the inclusion of great apes as moderate vocal learners and perhaps demonstrating an evolutionary function to a flexible vocal repertoire.’

Apes can recognise a friendly face, according to a new study, but they can’t help but stare at strangers

Primates living in zoos are able to recognise a friendly face, particularly their keepers, but can’t stop themselves staring at strangers, according to a new study.

They tested a dozen zoo-housed great apes living in social groups at Lincoln Park Zoo in Chicago that could use a touchscreen and had them look at pictures of faces.

Those they were unfamiliar with received more focus than the keepers, they discovered, suggesting apes spontaneously categorise humans based on familiarity. 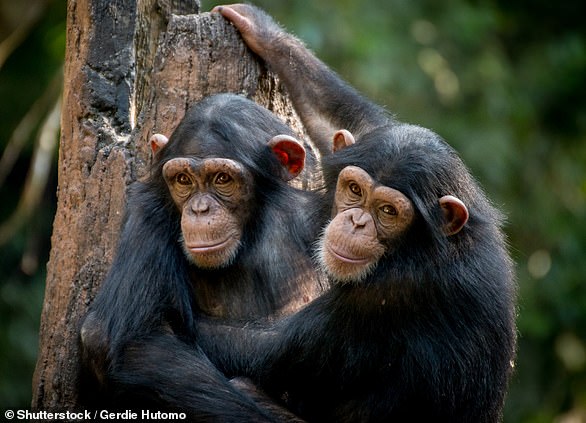 Primates living in zoos are able to recognize a friendly face, particularly their keepers, but can’t stop themselves staring at strangers, according to a new study. Stock image