A polka-dot dress that looks strikingly similar to a high-end designer style worn by the likes of Kate Middleton and Ivanka Trump has become a huge online fashion hit, sparking a frenzy among online shoppers.

The Alessandra Rich design, which is no longer available, has been worn by a host of A-listers over the years, including the Duchess of Cambridge, former First Daughter Ivanka, supermodel Christie Brinkley, and Suits star Abigail Spencer, who rocked the frock at her best friend Meghan Markle’s wedding to Prince Harry in May 2018.

Unsurprisingly, the A-list-approved design flew off the shelves – however now, a near-identical version has been released to fill the fashion gap left by the sold-out dress.

Inspiration: A $580 dress that looks near-identical to a celebrity-loved $2,400 Alessandra Rich design worn by stars like Kate Middleton and Ivanka Trump has become a fast fashion hit

The Alessandra Rich design, seen being worn by former First Daughter Ivanka in July 2018, sold out not long after being released – but a British brand has now released a lookalike version 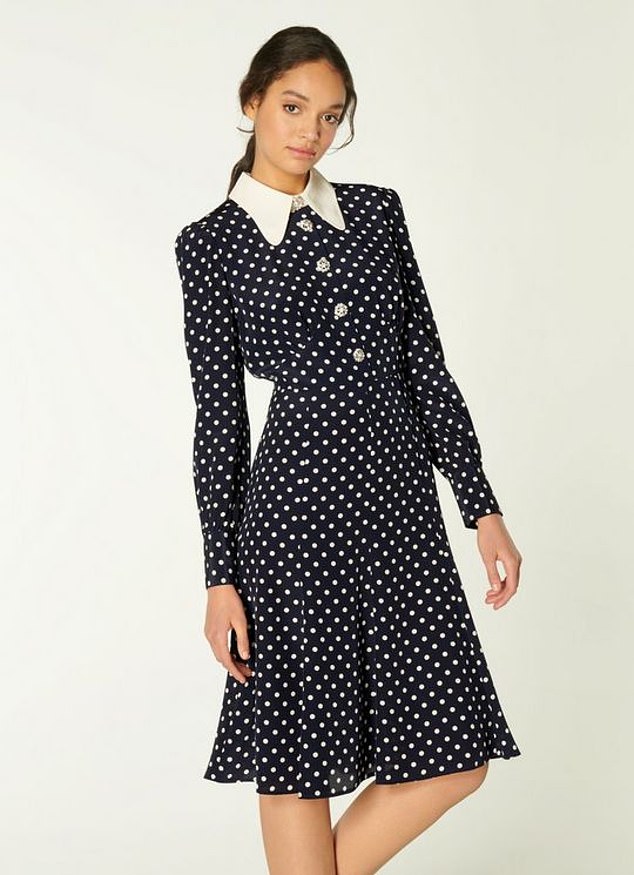 The L.K. Bennett style comes in a shorter, midi length, making it a more wearable option than the longer Alessandra Rich design.

Its popularity in the UK, where it has been worn by a host of British A-listers, has already prompted the dress to begin flying off the shelves.

TV presenter Holly Willoughby wore the dotty design on This Morning in January, pairing it with classic black pumps, while her fellow on-air star Amanda Holden has also been snapped in the L.K. Bennett design.

Shoppers have been going wild for the 1930s-inspired dress, with several stellar reviews insisting the ‘striking’ gown was ‘beautifully made’ from material which feels ‘lovely to wear’.

‘Got so many compliments wearing this dress’, wrote one shopper. ‘I’m a big fan of L.K. Bennett’s dresses, so far the best buy.’

Another said: ‘Love the material, love the style & love the fit. It feels so lovely to wear and it is very striking. It is makes me feel me feel very feminine.’

‘Beautifully made silk dress, with striking buttons and a lovely collar. Perfect for work and after work drinks. Good fit’, penned a third.

The dress closely resembles the one made by London-based designer Alessandra  Rich who has become one of the royal’s favorite designers in recent years. 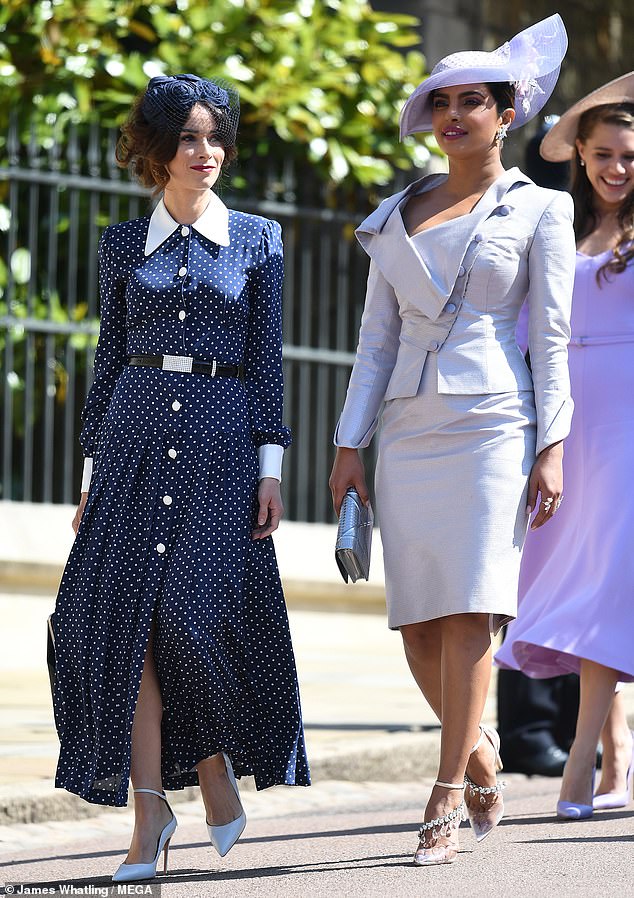 The Alessandra Rich style was famously worn by Meghan Markle’s friend and former Suits co-star Abigail Spencer, left, to the Duke and Duchess of Sussex’s wedding in May 2018

Christie Brinkley, left, was first to be seen in the dress, in April 2018. Right, Sarah Jessica Parker put her own spin on the style in May 2019, cinching the waist with a crystal-encrusted belt, layering it with a floral print navy edge-to-edge coat and white stiletto heels

Kate has worn the $2,400 navy and white polka dot midi on a number of previous occasions, including for Prince Charles’s official 70th birthday portraits in November 2018.

The style was famously worn by Meghan Markle’s close friend and former Suits co-star Abigail Spencer to the Duke and Duchess of Sussex’s wedding in May 2018 and became an A-list favorite the following summer.

One of the first to be seen in the dress, model Christie Brinkley, 64, stepped out in it in April 2018, wearing the shirt-style collar open-necked and teaming it with a trench coat.

Sarah Jessica Parker put her own spin on the style, cinching the waist with a crystal-encrusted belt, layering it with a floral print navy edge-to-edge coat and white stiletto heels.

Ivanka Trump accompanied her father on a visit to Iowa  in July 2018, choosing to woo Mid-West voters with the modest number, accessorizing it with a knotted white patent belt.