A New Jersey man couldn’t help but wonder if he was hallucinating when a mysterious blue light turned the New York City sky blue on Thursday night.

The Jersey City man called cops alarmed when he witnessed the illumination from his home across the river but law enforcement in his area couldn’t do much to reassure him.

They did manage to confirm he wasn’t imagining things after almost two minutes on the line describing what he saw, ending his chat with the question: ‘I ain’t hallucinating then?’ 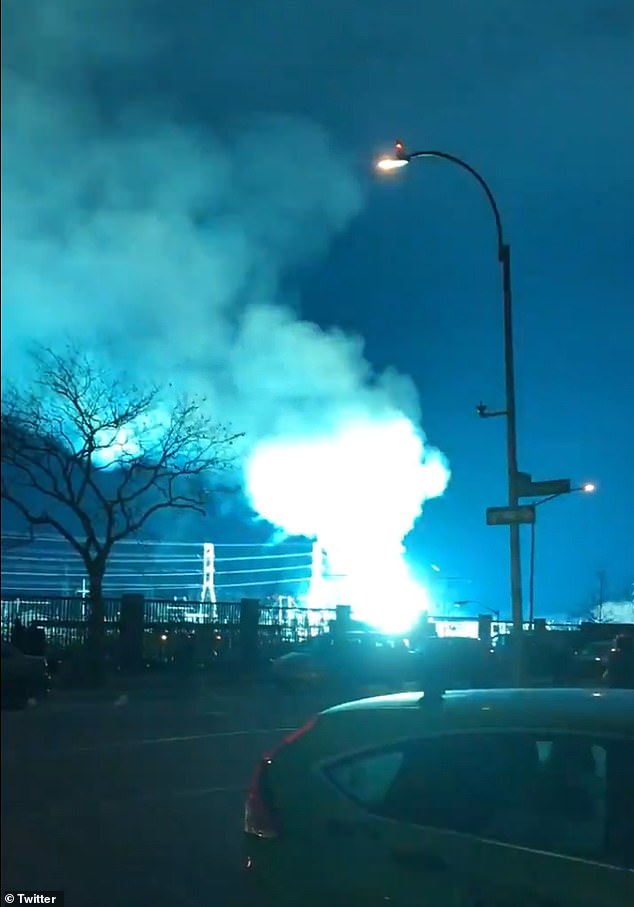 The operator politely replied ‘no sir’ in the clip that perhaps many can resonate with after what the concern Jersey man described as ‘sudden lights’ appeared in the sky.

At the start of the call, the coughing gentleman indicated he may have been sick with his repeated spluttering which he apologized for.

In an apparent effort to check illness wasn’t taking its toll he asks the operator: ‘You’ve gotten a few calls? So, I’m not out of my tree?’

But another response letting him know he’s not imagining things seemed not to be enough in the clip obtained by NBC New York.

As he continued the chat he made sure to leave his number to be contacted should the department – which couldn’t help him because they are not part of New York – change their mind and later be able to provide details of the spooky event.

Instructing the person on the other end of emergency line to ‘call back’, the two men wished each other a safe evening before hanging up. 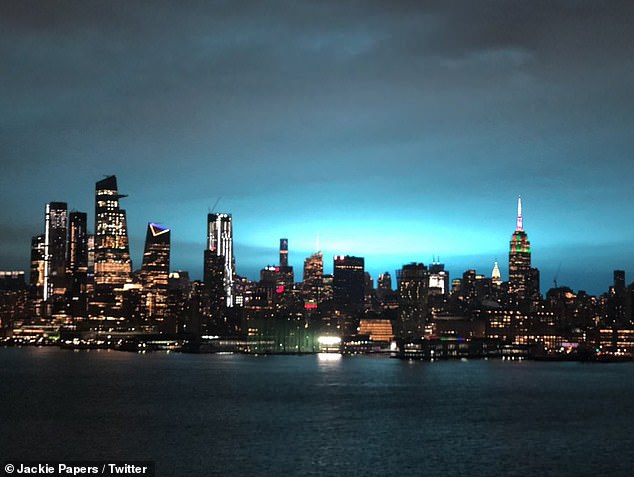 The explosion occurred around 9.20pm and no injuries were reported from the incident 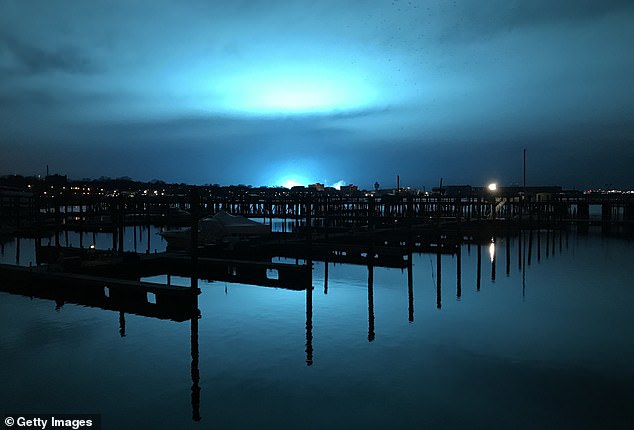 Even the NYPD couldn’t hide their shock after an explosion at a Con Edison plant.

As panic and confusion ensued for millions across the city just after 9pm, one cop mentioned the sighting didn’t seem to bode well.

In another audio obtained by the New York Post one said: ‘Look at the sky.’

The radio conversation featured another replying: ‘Yeah, it doesn’t look good’ before a female dispatcher added: ‘Um, what’s going on, what do you see?’

An aquamarine hue was blast across the sky after 138,000 volts of electricity went in the transformer malfunction blast in the borough of Queens that could be seen from Brooklyn and Manhattan.

The audio ended with an officer stating: ‘Please be advised, the sky is lighting up bright blue. I think something happened on the other side of Randall’s Island. I’m not sure what it is. Just let’s get aviation and harbor over there. It looks like a possible explosion.’ 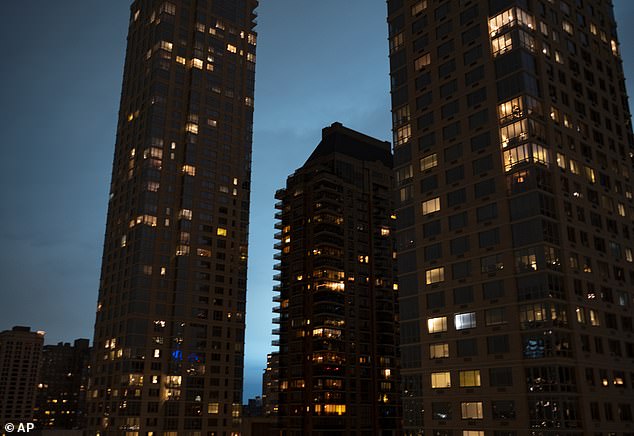 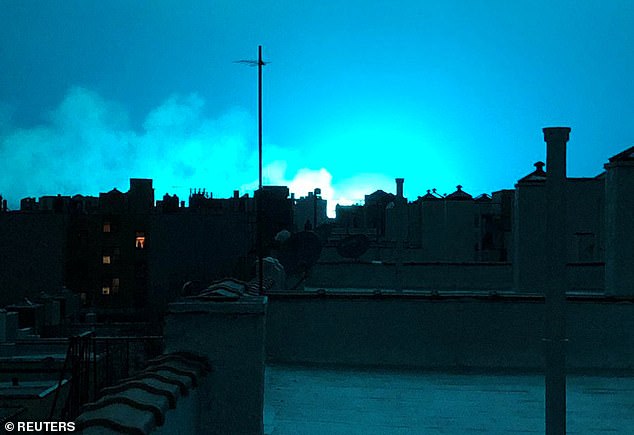 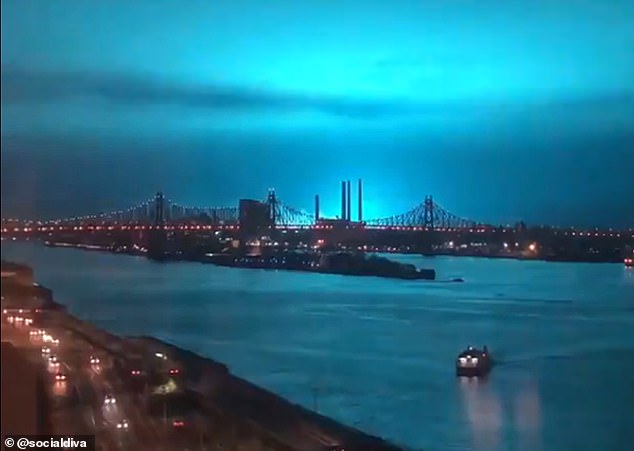 Power was cut at many addresses near the Astoria neighborhood area including the nearby La Guardia airport, which was forced to ground all flights for more than an hour during one of the busiest travel weeks of the year.

Officials at the notorious Rikers Island jail were also forced to use backup generators when their electricity shut off for 25 minutes and there were delays on the subway.

It is thought the blue aura was caused by a shorted-out power line, which can occur when live wires touch each other, grounded objects or the earth itself.

A ‘power flash’, as it is known, can be a combination of blue, green, turquoise and orange, originating from damaged electrical equipment causing arcing electrical discharges to light up the sky.

There were no injuries in the blast, the fire was quickly contained, and many saw the lighter side of the mystifying incident.

The NYPD jokingly confirmed that aliens had not invaded, while others shared memes comparing scenes from science-fiction films. 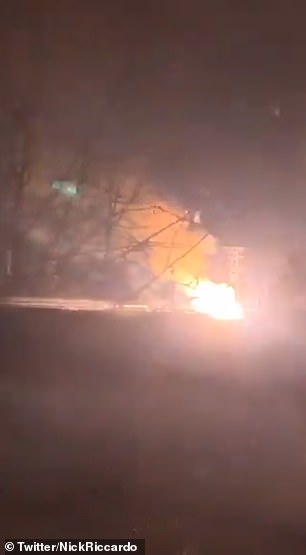 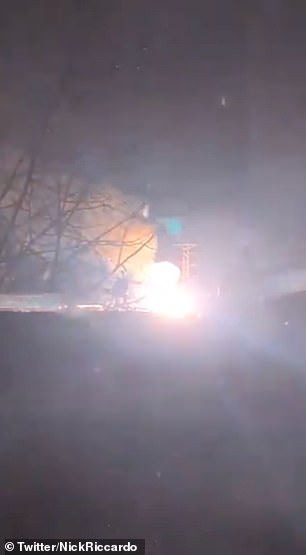 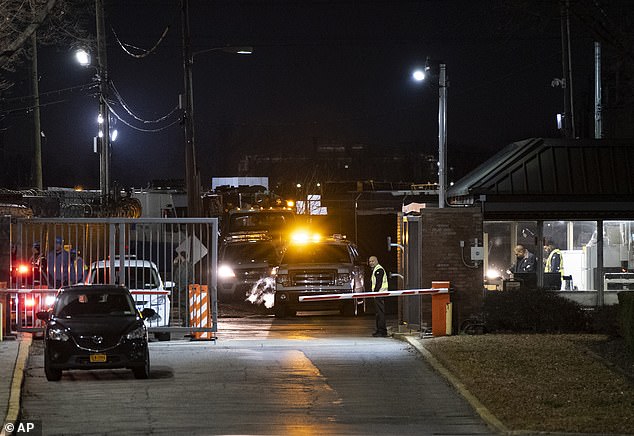 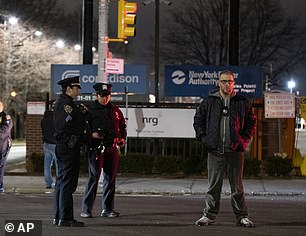 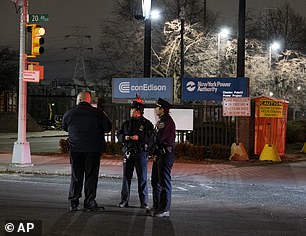 The incident unfolded when Big Apple residents streamed onto Twitter, Instagram and Facebook with their clips and pictures of the blue cloud hovering over the city.

Many people were initially confused at what was going on, and questioned whether the lights were coming from a concert venue.

The NYPD then put the conspiracy theories to bed and confirmed that the blast had been caused by a power surge at the substation. 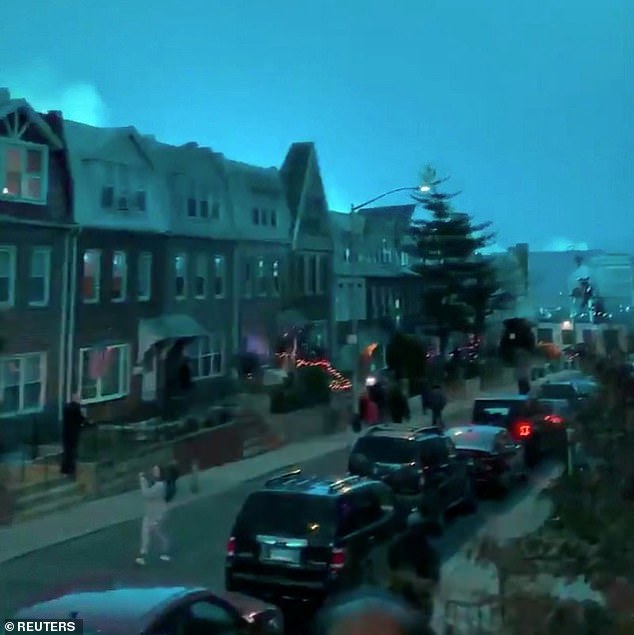 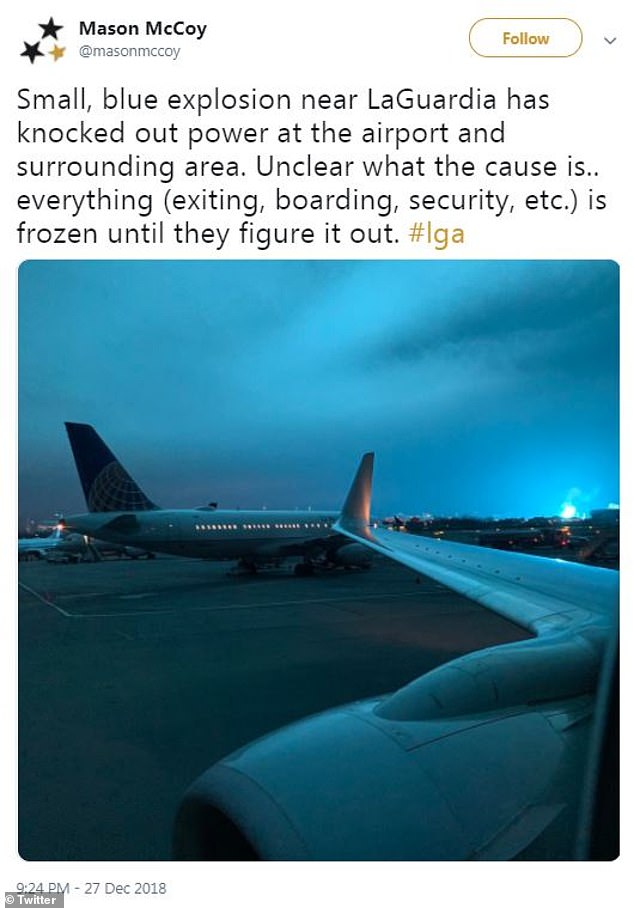 NYPD News posted: ‘ADVISORY: The lights you have seen throughout the city appear to have been from a transformer explosion at a Con Ed facility in Queens. The fire is under control, will update as more info becomes available. Follow @fdny, @NYPD114pct and @conedison.’

Con Ed added said on Thursday night that it was working with the NYPD on the matter and would provide updates over time.

Initial figures suggested that only 76 homes may have suffered a blackout as a result of the blast.

‘The NYPD and the FDNY are on scene at a Con Ed facility in Astoria where an apparent transformer explosion just lit up the sky over the city,’ said Mayor Bill de Blasio. ‘As soon as we have more information, we will share it.’ 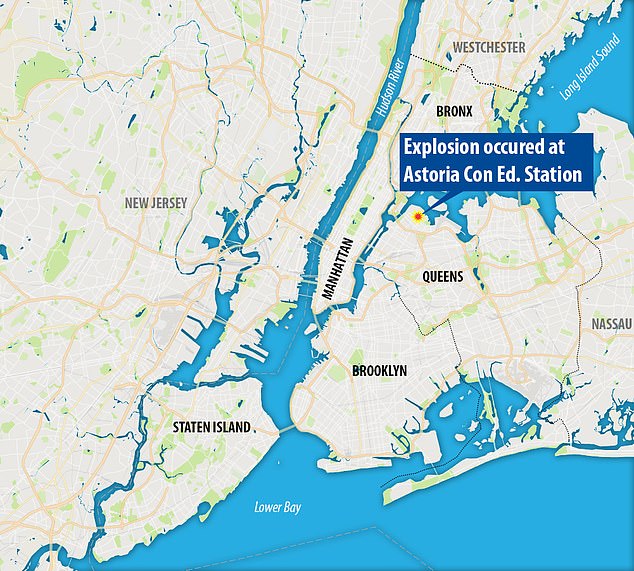 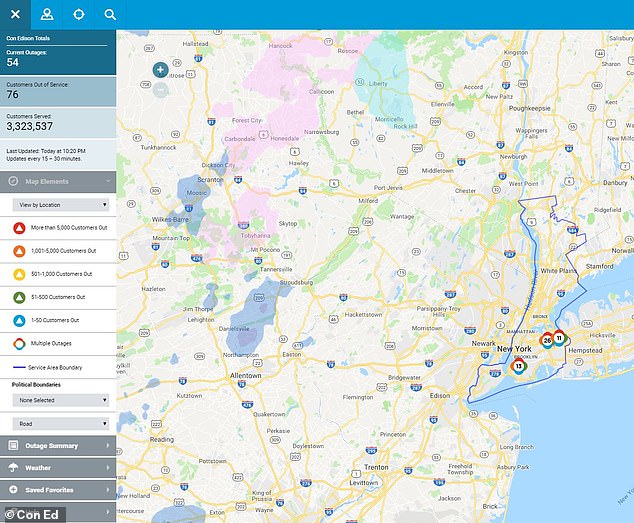 According to the utility outage map for Con Edison, there were only 76 who were said to have lost power

And even the 43rd Precinct of the NYPD couldn’t help but poke fun at the possible alien invasion.

A man named Nick Riccardo shared a video of the actual explosion as it took place outside his window.

‘The transformer explosion in Astoria was… right outside my window,’ he said. ‘So bright I couldn’t look directly at it.’

One user said: ‘Anyone else see this blue light in the sky just now in Brooklyn or NYC? #trippystuff #Skyline.’ 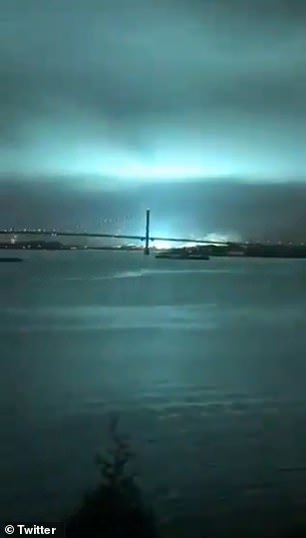 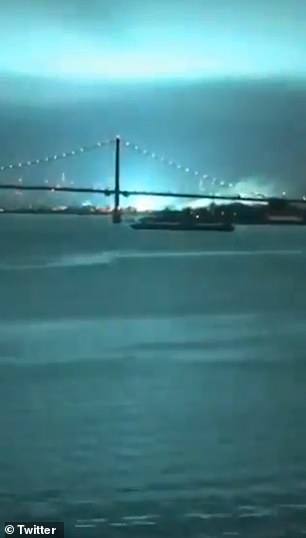 Spectators were mesmerized by the bright flashes of blue that illuminated the cloudy night sky. Folks all the way out in Jersey City reported seeing the flashy lights