Moment pensioner, 82, is dashed against a wall and gored by a bull leaving him seriously injured after he was unable to outpace the raging beast at Spanish festival

This is the moment an 82-year-old man was dashed against a wall and gored by an enraged bull he was trying to flee during a festival in Spain.

The pensioner was seriously injured but survived the attack by the beast at the Bou en Corda (Bull on a Rope) festivities in Ontinyent, in Spain’s Vall d’Albaida region on Sunday.

Footage shows revellers running from the lone bull through the streets.

But the elderly man is unable to outpace the rampaging beast, which charges into him horns-first, tossing him in the air and against a wall. 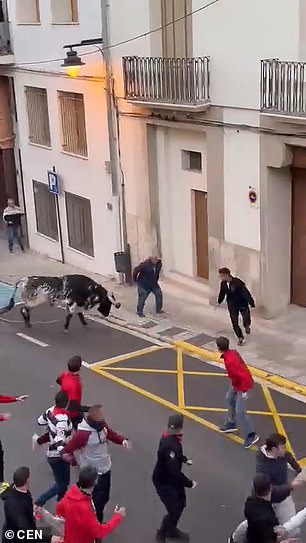 The crowd is shown as the bull nears (left). When residents scatter, an 82-year-old man is left in the bull’s path (right) 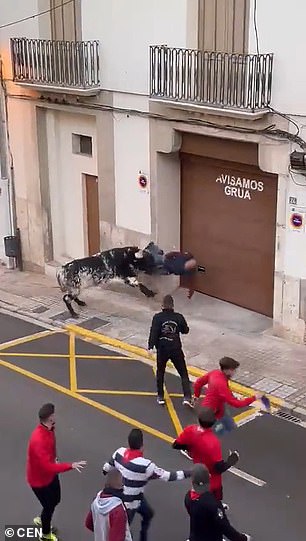 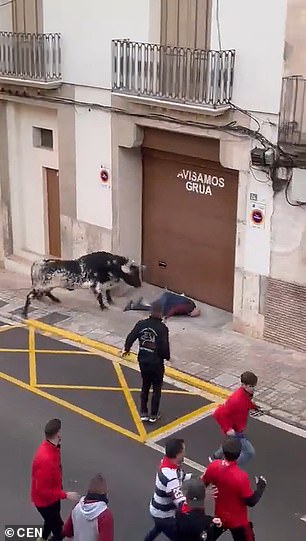 The bull charges into the elderly man horns-first, tossing him in the air and against a wall. The bull continues to gore him until it is pulled away by the rope tied around its neck (right). The man was taken to hospital with trauma to the front of his head and his left occipital lobe, as well as a cut to his left hand

People can be heard screaming as the man’s limp body hits the pavement with a thud.

The bull continues to gore him until it is pulled away by the rope tied around its neck.

The man was taken to hospital with trauma to the front of his head and his left occipital lobe, as well as a cut to his left hand.

At the time of reporting, he remained in hospital. Local media described his condition as ‘serious’.

The Aragonese Spanish tradition, practiced in several towns in the Torís region, involves people trying to take the bull inside several houses in the town, always tied with a rope.

Over the weekend, a 60-year-old woman also ended up in hospital after tripping and  smacking her knee during the festivities.

A 16-year-old woman was treated for a laceration to her right knee and a cut to her lower lip when the first bull was released, reported Levante.

Researcher Rosa Fernandez found last year 34.7 per cent of the Spanish population supported festivities involving bulls and wanted to keep them, 44.1 per cent wanted them banned and 21.2 per cent were against them but did not want them banned.

‘The question is not what that old man was doing there, but who put a bull on the public highway and granted permission to the mob to corner him, make him feel afraid and enrage him,’ said one social media user in Spanish.

‘This country is still determined not to enter the 21st century.’

Other users also decried the practice, which has seen six people killed during festivities involving bulls in Spain’s Valencia region alone in 2022.

‘Until these displays of primitive hustlers are banned, we will continue to feel embarrassed,’ said a third.