Viewers branded the CEO of a hotel chain ‘excruciating cringeworthy’ after he thought ‘give a s***’ was an appropriate brand value in A Very British Hotel Chain: Inside Best Western.

Last night’s episode of the Channel 4 show featured first-time CEO and Australian Rob Paterson, who spent 18 months rallying the troops with his ambition to double the number of member hotels.

But it wasn’t long before it was revealed he had also been busy inspiring the team with his new set of values at the Best Western HQ in York, which is situated on an industrial estate.

As Rob stood in front of his team pointing at his annotated whiteboard, he could be heard enthusiastically saying: ‘When we set that target of 500, why not a thousand? And why not?’ before moving on to discuss the company’s new brand values.

‘The first one is ‘give a s***,’ second one is ‘own it,’ ‘be courageous’, so take a risk and be bold, ‘beat yesterday’ and ‘smash it.’ ‘We want these signs on the building saying ‘beat yesterday.’ So we don’t just want to hit out numbers, we want to smash our numbers.’

Many who tuned in were quick to take to Twitter following the revelation – with many comparing it to scenes from hit comedy The Office, which starred Ricky Gervais as the famously awkward office manager, David Brent.

CEO Rob (pictured), from Australia, was branded ‘cringeworthy’ by A Very British Hotel Chain viewers after trying to instil a brand new set of values for the team

Taking to social media, one person wrote: ‘#InsideBestWestern on is excruciatingly cringeworthy. The MD is proud of his new values… ‘Give a s**t’ and ‘Smash it’ being two of them’ (pictured)

‘#InsideBestWestern on is excruciatingly cringeworthy. The MD is proud of his new values… ‘Give a s**t’ and ‘Smash it’ being two of them. It’s like watching the worst of The Office. #embarrassing,’ wrote one, while a second penned: ‘The CEO hasn’t got a bloody clue!’

A third added: ‘It really takes a 6 hour training course to yell ‘own it’ and ‘give a shit’ with irritating enthusiasm,’ while a fourth wrote: ‘Rob is David Brent. I swear Ricky Gervais wrote this.’

Shortly after the new brand values were unveiled, viewers were introduced to Rob’s right-hand man Mark – head of development – who showed the camera crew the old ones which were still mounted on the wall.

These included the likes of ‘put a smile on somebody’s face everyday,’ ‘think big and act now,’ and ‘make magic happen by stepping outside your comfort zone.’ 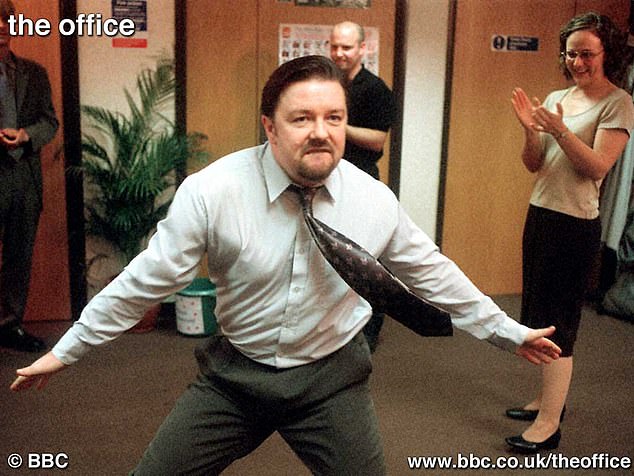 Those who tuned in compared CEO Rob to Ricky Gervais’ character David Brent, in it comedy The Office (pictured) 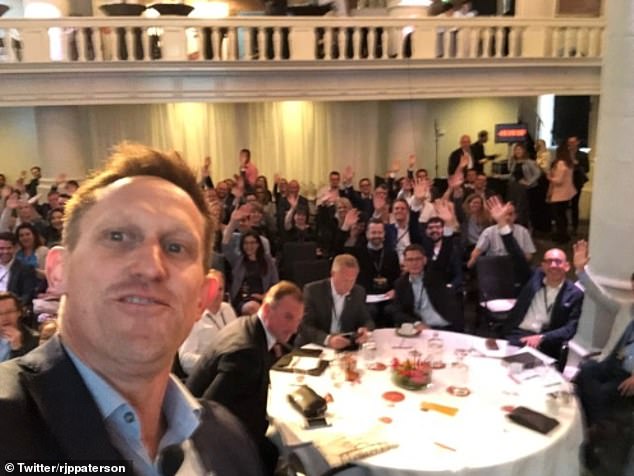 During the episode, Rob could be seen standing in front of his team pointing at his annotated whiteboard. Pictured, at a direct booking summit 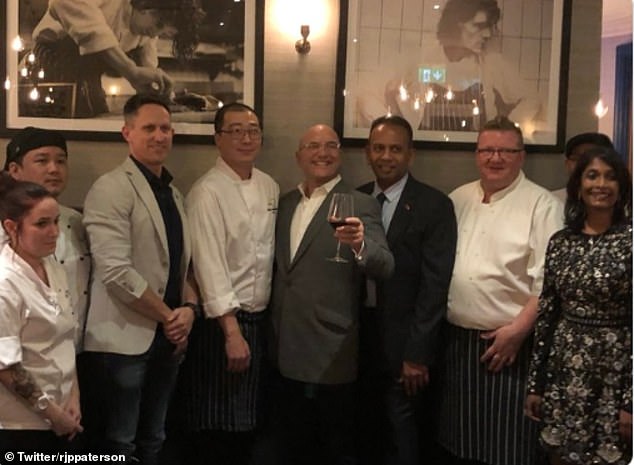 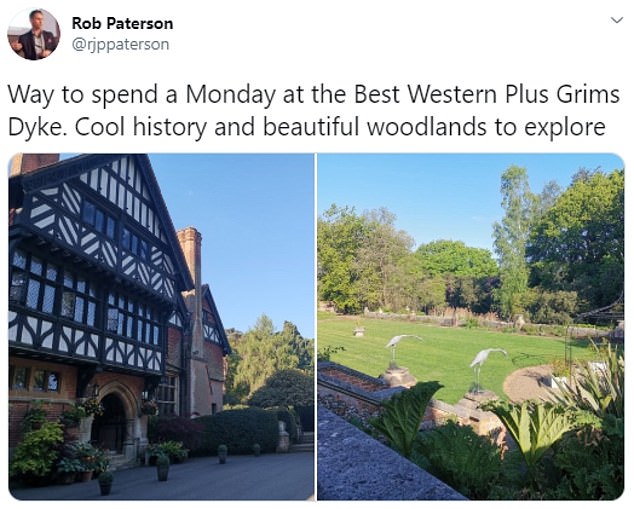 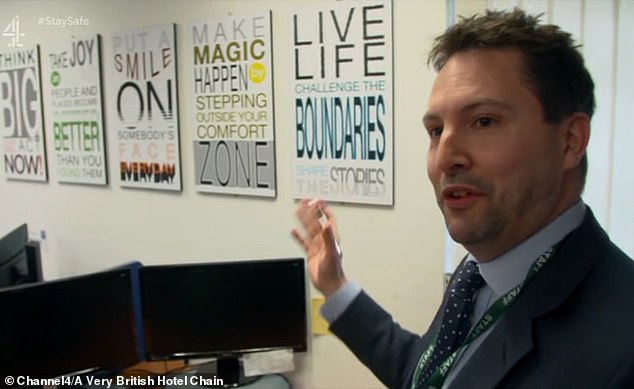 Rob’s right-hand man, Mark – head of development – showed the camera crew the old values which were still mounted on the wall (pictured) 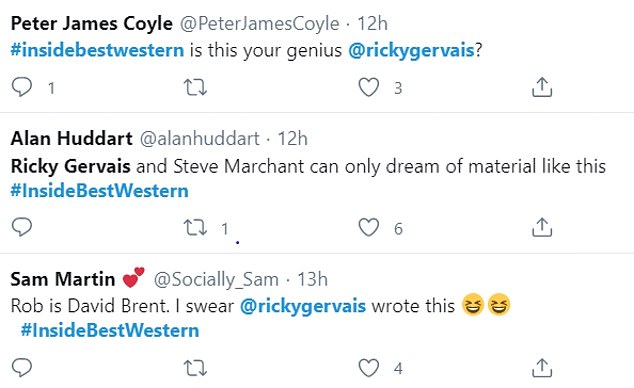 And after a cameraman questioned why the old values couldn’t still stand, he continued: ‘If you have too many values you confuse people. Five is what you need to have. If you have ten it just gets ridiculous, doesn’t it?’

Later in the episode, he could be seen greeting a team with one bottle of champagne to share between themselves, and a hamper full of gummy bears.

Paterson joined the largest collection of independent hotels in Great Britain in mid-February after a 16-year career with brands such as Accor, De Vere, Malmaison and Hotel du Vin.

At the time, Tim Rumney, chairman of Best Western Great Britain, said: ‘We are very positive about Rob’s appointment at this stage in the evolution of our business.

‘Best Western is changing, in the last three years we have improved the standards of our member and associate member hotels, going from one to 10 brands and appealing to more guests than ever before.

‘Rob’s strong track record in hospitality, his future facing approach to technology, digital and commercial performance impressed us and we look forward to welcoming him to the business. He joins at an exciting time in Best Western’s 70-year journey.’

Rob Paterson commented: ‘Best Western is an iconic, global brand and I cannot wait to meet the independent hoteliers that make up the membership and get started.

‘The potential of the brands and the organisation excites me and I look forward to building on the great work of the last three years and continuing to grow the appeal of Best Western for hoteliers, investors and guests.’

Paterson is CEO of Interchange & Consort Hotels, the parent company of Best Western Great Britain and its purchasing company, Beacon.

So it’s no surprise that viewers struggled to see past the comedy element of the show – and were confused as to whether it was supposed to be a serious documentary.

‘I am still struggling to believe its not a mockumentary. Love it,’ wrote one, while a second commented: ‘Please can we have this on every week it’s so funny. I have so much material for management courses from this series. And it’s all in the dont run a business like this section. Pmsl.’

A third questioned: ‘Is this a comedy skit docu drama with real people and hotels? Or clever marketing that has gone above my head?’ while a fourth wrote: ‘Did Rob get Ricky Gervais’s permission to do a remake of the office?’

A further added: ‘Inside Best Western’ is the new ‘The Office’ spin off we didn’t know we all needed.’

One person who tuned in commented: ‘I am still struggling to believe it’s not a mockumentary. Love it’ (pictured)