An AFL match in Geelong has been thrown into chaos after spectators and commentators were booted from the stadium due to coronavirus fears.

Victoria’s Department of Health and Human Services (DHHS) have ordered all travellers who flew into the state from Queensland since March 12 to isolate after a local case of coronavirus was reported in Brisbane.

The announcement came less than one hour before Friday night’s clash between Geelong and Brisbane Lions at GMHBA Stadium.

‘Anyone who has entered Victoria from the City of Brisbane and Moreton Bay Region since 12 March must immediately self-isolate, get a coronavirus test within 72 hours, and stay isolated until they receive a negative result,’ DHHS said on Friday night.

An AFL match in Geelong has been thrown into chaos after spectators and commentators were booted from the stadium due to coronavirus fears. Pictured: Fans arrive at GMHBA Stadium on Friday

The Lions touched down in Victoria on Thursday but the game was able to go ahead as the team were granted an exemption by the government.

The Victorian government’s health advice was shared with the stadium through the loudspeakers.

‘As we speak, fans are being told that they must leave the ground if they have come in from Queensland. The loudspeakers are pushing that message.’

Channel 7 commentators Luke Hodge and Wayne Carey were among attendees required to leave the stadium. 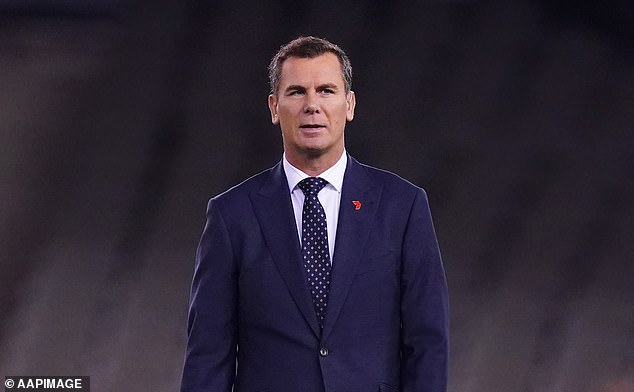