It sounded far-fetched from the very beginning.

An Alaskan miner, cornered in the brutal wilderness to stand-off against a hungry brown bear for four days before being rescued by a Coast Guard’s helicopter that happened to be passing by, without a scratch on him.

But that’s what Richard Jessee, a gold hunter who was rescued last week in Nome, Alaska, said happened to him.

The unlikely story gathered attention from the national press and Jessee told proudly about hiding from the animal after it crushed his ATV and tossed his phone in a river.

Now, however, locals are questioning his version of events after going to the cabin where he was rescued but finding no evidence of the days-long battle he described.

Other local miners who were interviewed by The Nome Nugget went to the cabin where Jessee was rescued but found no bear tracks.

They did however find the ATV and attached trailer that Jessee said the bear pushed into the water.

On top of it was a packet of bacon in a cooler that was untouched.

‘There’s just no way it was a bear!’ one anonymous source said.

They think he simply crashed the ATV into the water, waterlogged it, but was too embarrassed to admit it, so made up the story after being rescued.

Richard Jessee says he was riding his ATV with a trailer attached to it to it in Nome last week when he says the bear ‘came out of nowhere’, picked it up like ‘a toy’ and tossed it

‘We went out there to the cabin, but we couldn’t find a bear track within 500 feet of the place, but it should have been all torn up, according to his story.

‘There’s no hair, no tracks, no scat, nothing.

‘He made a fool of us. We found out that his story didn’t match what we found.’

The lack of prints were especially odd given that the region had gone through heavy rainfall when the incident supposedly took place, which would leave the ground muddy and perfect for leaving prints.

The owner of the cabin added that he has never had issues with bears near his property.

The group also found Jessee’s ATV without a single claw mark despite Jessee’s claim that the bear attacked the vehicle and pushed it into a waterhole. 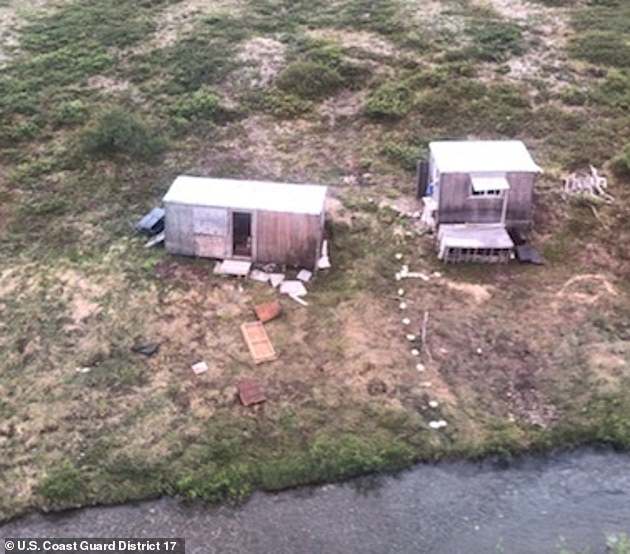 A Coast Guard crew spotted  Richard Jessee in a remote mining camp, pictured, 40 miles from Nome, Alaska, and waving both arms in a plea for help 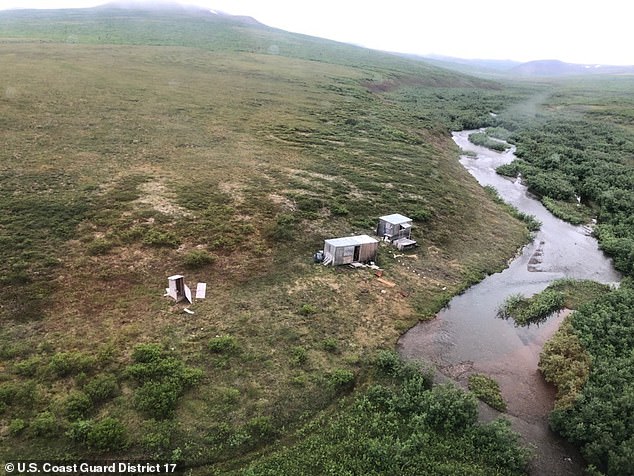 A Coast Guard chopper spotted Jessee standing near a shack with the words ‘SOS’ and ‘help me’ scrawled on its tin roof.

The only marks they did find on the vehicle were located around the front and back edge of the ATV, which they say could only have been caused by a bear if the animal had only one claw.

Some of the miners now believe that Jessee had actually crashed his ATV and was stuck without a way to get back.

They think he might have been too embarrassed by the incident and lied about the bear attack.

Jessee is standing by his story.

‘They can believe what they want. I was there. I know what happened.  I haven’t been that scared in a very, very long time.’

And as for the bacon, he says he didn’t get it out of the cooler because he didn’t want the smell of raw meat to escape from it.

‘I didn’t touch any of the food that was in the cooler- bacon, hamburger, all kinds of stuff.

‘I didn’t want the smell of it to come out and attract the bear. I grabbed the dry food, repacked the trailer and left it there.’

In his original interview, he told the Nugget that the bear tried ‘for days’ to get into the cabin but couldn’t, even though he didn’t have a door. 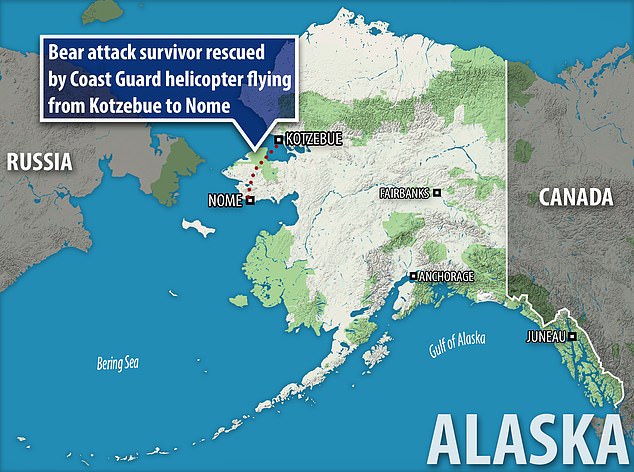 The Coast Guard crew was on its way to Nome, Alaska from Kotzebue when they spotted him

‘There was no doubt about it: the bear was trying to get into my cabin. I don’t know why it was so aggressive. Maybe it had cubs nearby,’ he said.

Lieutenant Commander Jared Carbajal was piloting a helicopter for a mission near Nome when he had to take a different route because of the weather.

He said: ‘We were flying near a lot of old mining sites, and my copilot noticed a guy waving at us. 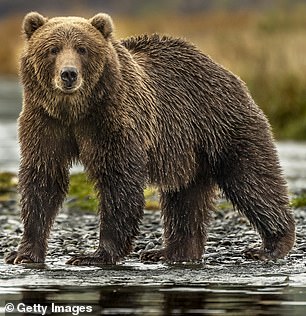 Jessee claimed he had been terrorized by a grizzly bear, like the one pictured, who dragged him down to a river and kept coming back to his shack every night for a week

‘He was waving two hands over his head, and that’s usually sign of distress, so we turned to fly over to check it out and make sure he was okay. As we came up, we noticed on top of his roof, he had painted “SOS HELP ME.”

They flew him to a hospital where James West Jr., chief of Nome Emergency Services, was waiting.

In an interview with DailyMail.com, he said: ‘He was carrying a revolver on his side, and I told him, “You’re going to have to remove your revolver.”

Jesse explained to him that he used that gun to shoot at the bear, after it knocked him off his bike then pounced on him.

‘He had some bruising on his knee, and he was complaining of possible broken ribs, but nothing major.

‘There were no bite marks or anything like that. He was mostly just shaken up.

‘I’ve seen a hell of a lot worse. I had one friend of mine get mauled and lose a major portion of his face a few years ago. Any time you have a bear mauling, it’s usually bad. I expect the worst.’

Jesse’s greatest concern was that he’d left his mining gear at the cabin, and was anxious to retrieve them after his hospital stay.

‘He was more worried about his stuff, which he left out in the open. That’s all he had to his name at that point.’