Alligator found in man’s home near after Hurricane Harvey

A man who fled his Texas home as Hurricane Harvey wreaked havoc on his neighborhood returned home to find an alligator in his dining room.

Brian Foster arrived at his Humble, Texas, home on Friday to survey the damage caused by the record-breaking rain brought on by the storm.

As he looked around the home with a rescue crew, he saw the 9ft alligator crawling along the floor.

He immediately called the police so the beast could be removed. Officers taped the gator’s mouth shut so it could be taken away.

It then required four officers to carry the alligator through the house, out the front door and into waiting vehicles.

Wildlife officials now plan to move the beast back into its natural habitat. 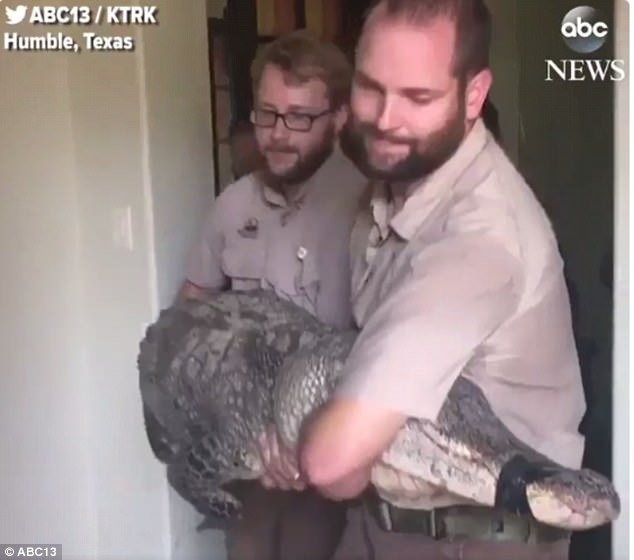 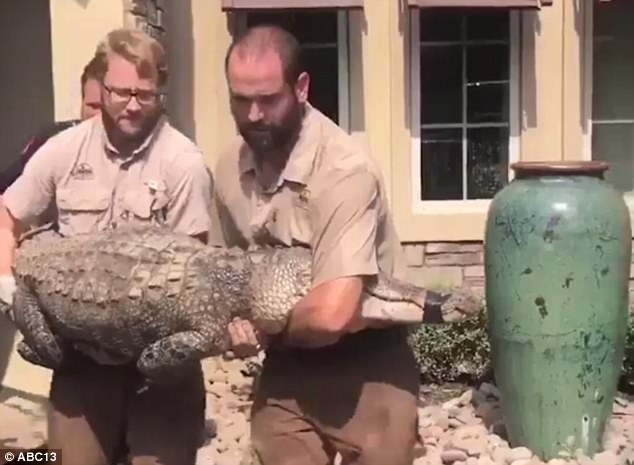 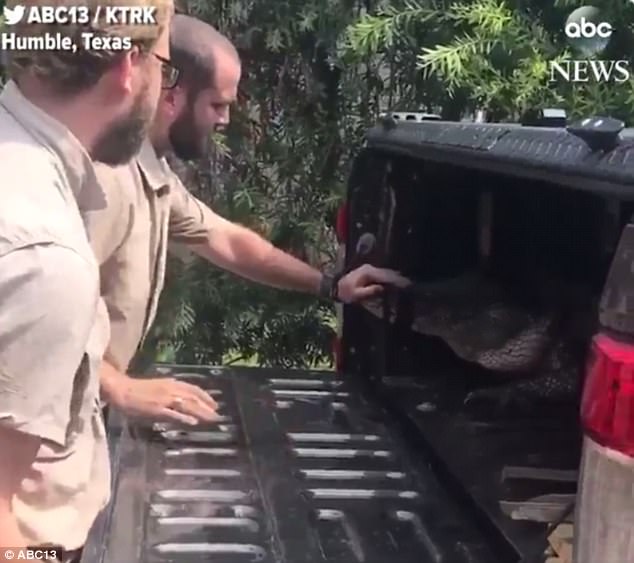 Flood waters generally seep into comes through doors, windows and other cracks. In this case it is unclear how a nine-foot creature was able to enter the home.

It’s possible that walls or windows sagged under the weight of the water and made a gap large enough for the animal.

Authorities warned those affected by floods to leave gators alone and call for help if they find one.

The vast majority of evacuees returning to their homes could only rifle through the damage for prized possessions and clothes to bring with them back to the shelters.

Figures from the American Red Cross show that the numbers of displaced people are only rising, from 33,000 in their shelters Wednesday to 42,000 on Thursday.

The flood damage was strangely inconsistent throughout the city.

A house on one street could be drowned with 4 feet of water while it’s neighbor was left completely dry.

For some people, it could take months before their homes are livable.

As of Friday morning: 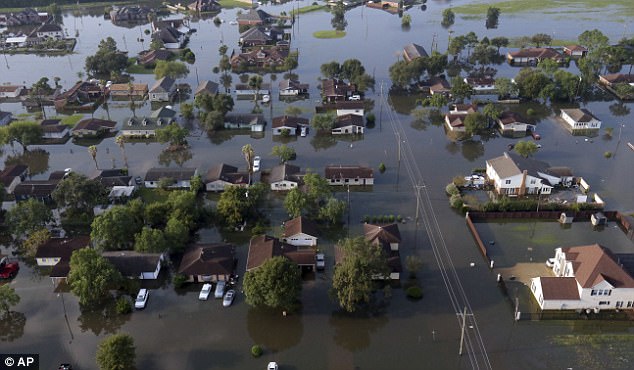 In this arial photo, homes sit in floodwaters caused by Hurricane Harvey in Port Arthur, Texas on Harvey 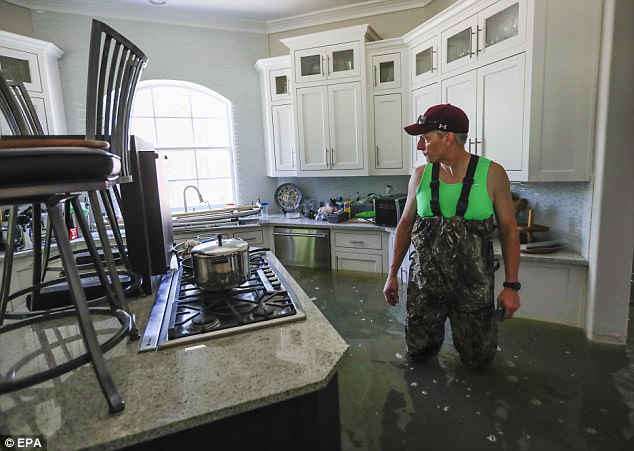 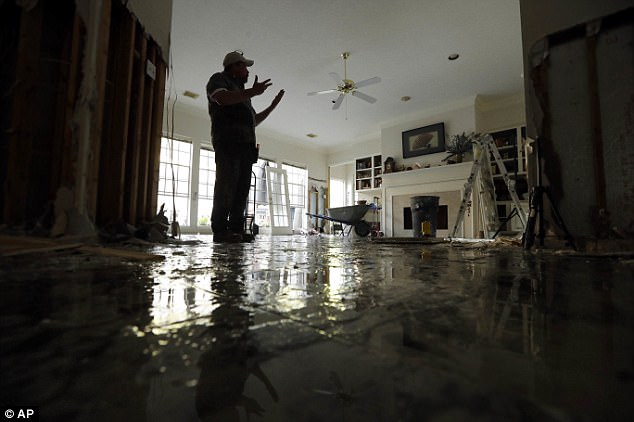 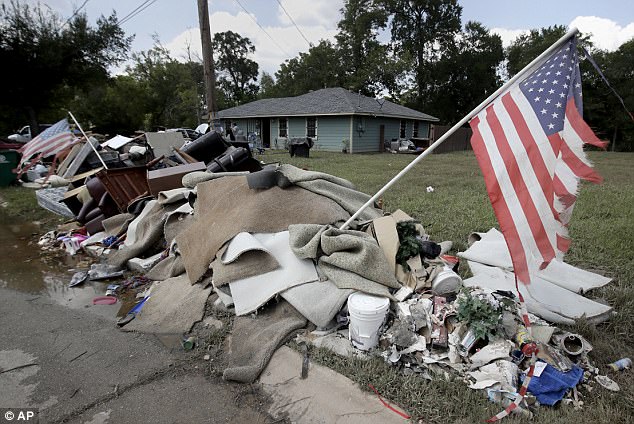 Earlier this week, a woman took a video of two huge alligators floating in her backyard in Missouri City, Texas.

On Tuesday an alligator sanctuary warned that up to 350 alligators could soon be on the loose in southeast Texas due to rising floodwaters.

Water is within a foot of rising over the fences of Gator Country in Beaumont, which houses hundreds of the dangerous reptiles.

The sanctuary’s most fearsome residents, which include two 13-foot alligators called Big Al and Big Tex, have been placed in trailers to prevent them from escaping.

But workers have warned there is little they can do to stop the escape of the rest of the alligators from their outdoor enclosures.

‘We’ve worked around the clock and I don’t know what else to do. We’re truly tired.

‘The good news is, we caught all of our crocodiles, all of our venomous snakes.’ 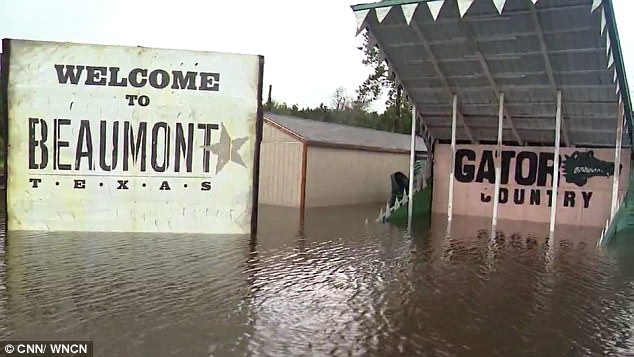 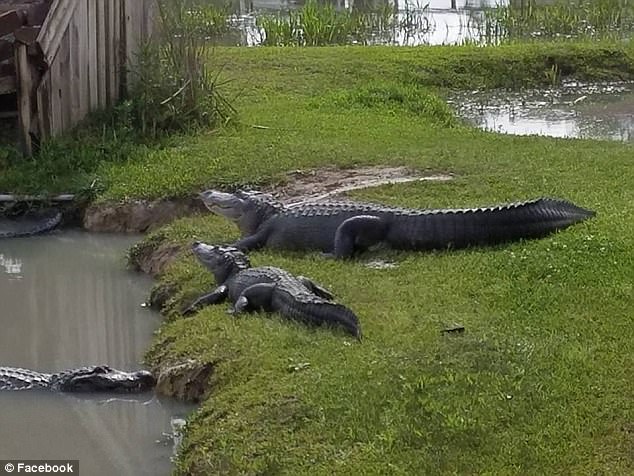 Water is within a foot of rising over the fences of Gator Country in Beaumont, which houses hundreds of the dangerous reptiles (pictured)

For those who are moving back into their homes, officials have issued warnings not to eat or drink anything that has come into contact with the contaminated floodwaters. Furniture that was exposed to the water should be cleaned with a solution made of one cup bleach to five gallons of water.

Unfortunately, many Houston residents will likely be paying to fix their flood damaged homes themselves because most were not insured.

Standard home insurance policies don’t come with flood protection which means homeowners will have to pay for a lot of the damage out of their own pocket.

It’s estimated that just 15 to 20 per cent of homes in the Houston area were covered by flood insurance when Harvey hit.