Amazon rainforest is on the brink of destruction and is close to ‘tipping point’ when it no longer benefits us by soaking up greenhouse gases, WWF says

The Amazon rainforest is now ‘alarmingly close’ to dying by 2030 due to climate change and forest loss, a report warns.

The world’s largest rainforest is close to a ‘tipping point’ that could mean it changes forever, no longer benefiting humanity by soaking up greenhouse gases, the WWF report says.

Speaking to a cheering crowd, he pledged to ‘undertake a big fight against deforestation’.

The former president beat the incumbent Jair Bolsonaro in last month’s elections and will assume power on January 1.

Deforestation in the Amazon reached a record high this year. Pictured: A Brazilian flag seen in a deforested and burnt area on the edge of the BR-230 Trans-Amazonian highway on September 22 this year 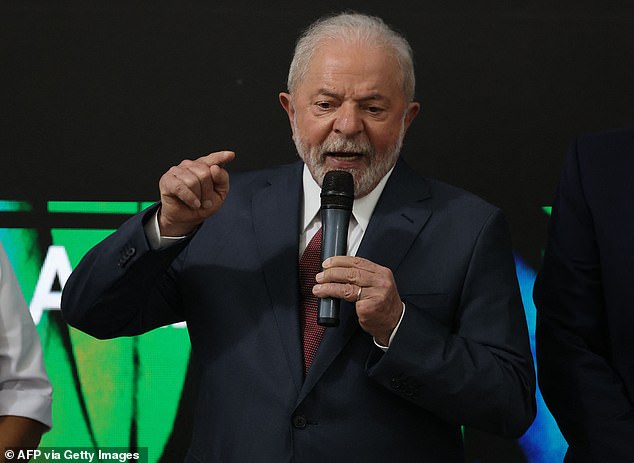 Deforestation in the Amazon reached a record high this year. Under Mr Bolsonaro, illegal logging increased to the highest levels in 15 years.

Speaking about the WWF Risking The Amazon paper, lead author Professor Mary Gagen said: ‘We could lose the Amazon to a state of permanent, irreversible degradation that would impact the entire planet… the evidence gives a stark warning.’

Between 13 to 17 per cent of the Amazon rainforest area has already been lost in the past 50 years.

The WWF report said an area of the Amazon one quarter of the size of Europe – 1.4 million sq miles – has experienced a lack of rain, a prolonged dry season and deforestation which could lead it to become permanently degraded, turning to scrubland.

The report said that the ‘tipping points’ which could lead to irreversible loss include receiving less than 1500mm annual rainfall, a dry season of more than 7 months and deforestation of the area to reduce to just 20 per cent of the original cover.

The report said that 34 per cent of the area has already experienced at least one of these critical tipping point thresholds.

The loss of the Amazon would reduce the chances of halting global warming as the areas’ trees soak up enormous amounts of carbon dioxide. 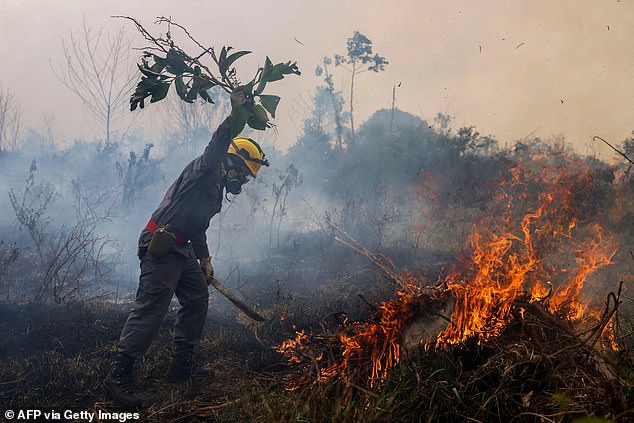 Between 13 to 17 per cent of the Amazon rainforest area has already been lost in the past 50 years. Pictured: A firefighter combating a fire in the Amazon in Apui on September 21

Professor Gagen added: ‘This paper sounds an alarm bell for humanity, revealing the twin threats of climate change and forest loss are pushing the world’s largest rainforest alarmingly close to a precipice…

‘The more the Amazon is destroyed, the more we limit our ability to stay within 1.5 degrees.

‘The evidence gives a stark warning that we need to take the tipping point risk seriously and act to immediately cut emissions and address the cavalier attitude to forest loss and degradation which are sending people and planet down a path to disaster.

‘Only by listening to the voices of Amazonia’s peoples and by protecting and restoring nature can we bring our world back to life.’