Self-confessed snack fanatic Katy Perry praised Gabby Barrett’s performance on American Idol on Monday night and wondered what foods might have fueled her.

Gabby, a 17-year-old Pennsylvania native, was one of six contestants that had been voted into the top 10 by viewers.

The remainders were at the mercy of the judges.

Snack fan: Katy Perry asked contestant Gabby Barrett what she had to eat after her electrifying performance on Monday’s episode of American Idol

Gabby celebrated her victory with a performance of Little Red Wagon by Miranda Lambert.

‘What did you eat for dinner? Because that was so wild,’ yelled Katy.

The rest of the Idol contestants were allocated either to the ‘victory zone’ or the ‘danger zone’ depending on the public vote. 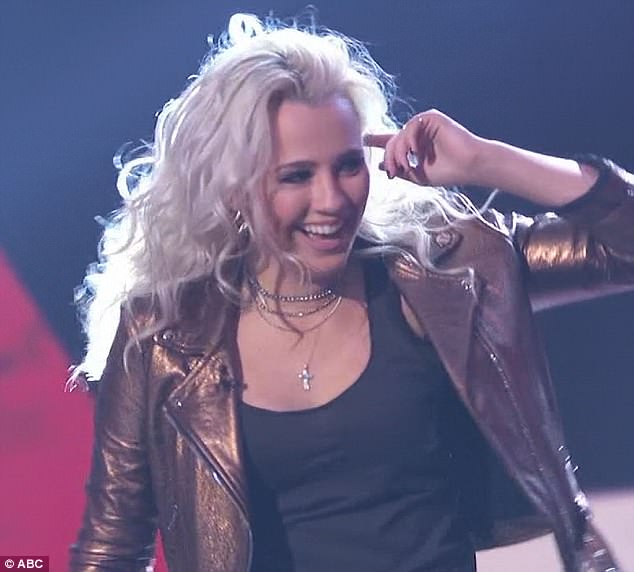 Top ten: Gabby was thrilled as viewers voted her into the top 10 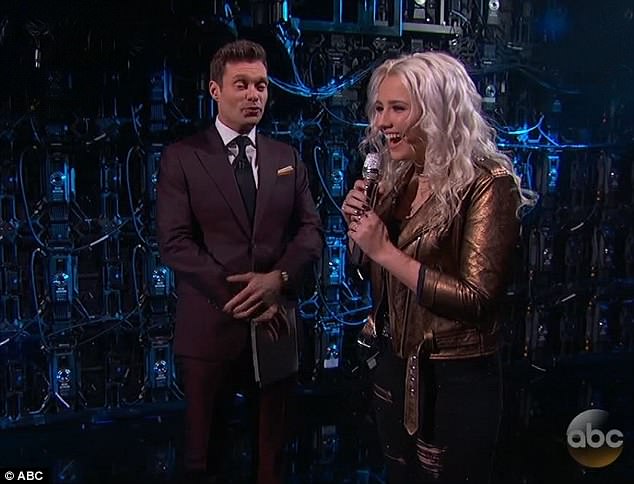 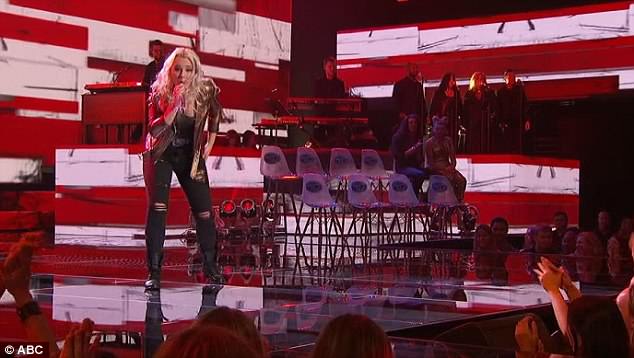 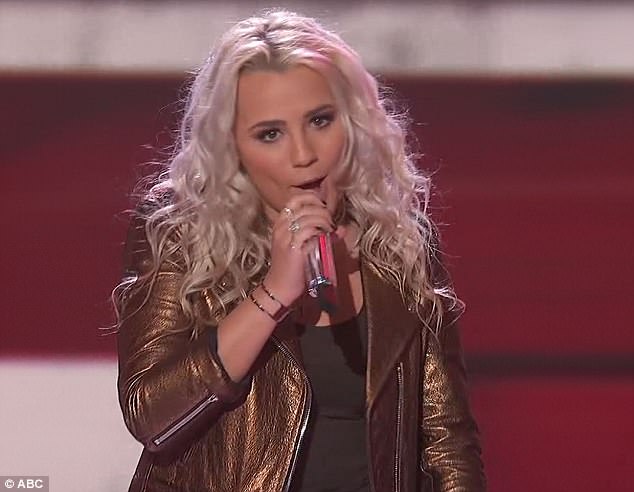 Moving forward: The 17-year-old Pennsylvania native was one of six contestants voted into the top 10 by viewers

The 20-year-old Iowa native sang The Bangles hit song Walk Like An Egyptian and then walked straight to the victory zone.

Next was Venezuelan 22-year-old Michelle Sussett, who sang for survival with an original song called I’m A Dreamer. 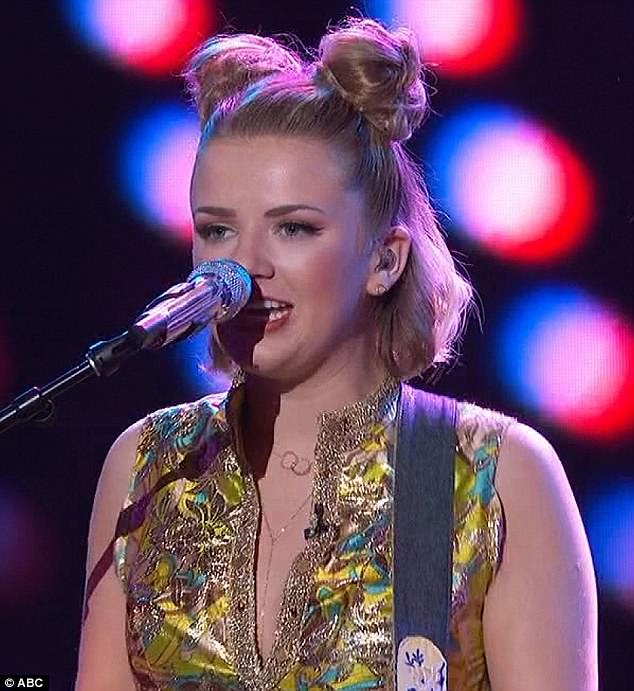 Up first: Maddie Poppe was the first to perform and then moved to the Victory Zone 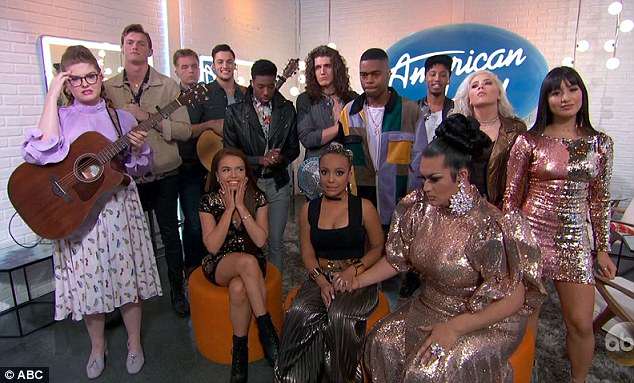 In limbo: The rest of the top 14 waited to learn if they made the top 10 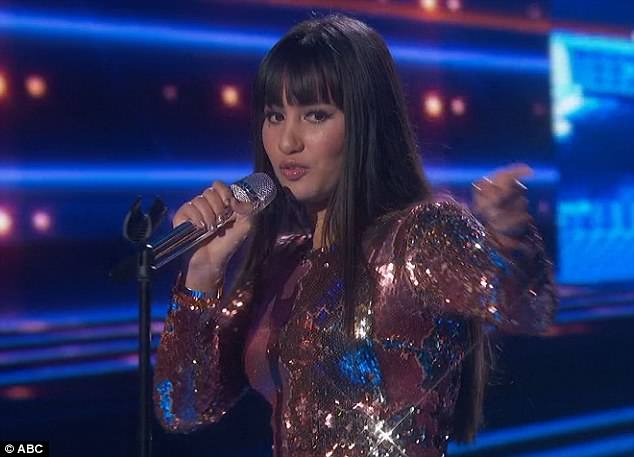 ‘I was so glad you pulled that ace from up your sleeve,’ said Katy.

‘I love this country and I’m grateful to be here,’ beamed Michelle.

Next was Compton resident Marcio Donaldson. 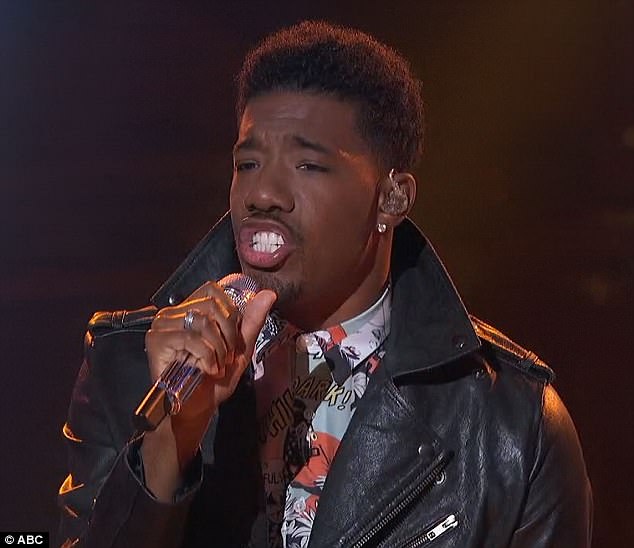 Song choice: Lionel Richie, Katy and Luke Bryan were left under impressed by Marcio and his shaky song choice 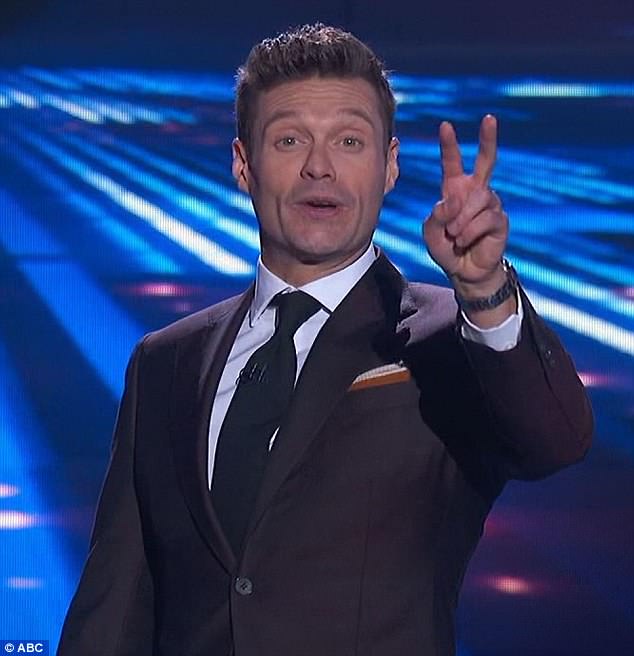 The 28-year-old hopeful was left in jeopardy, so he sang Nick Jonas’ Jealous.

‘I would say that’s not the strongest thing we’ve seen from you,’ said 41-year-old country star Luke Bryan.

Lionel Richie warned him that he’ll have to ‘take a lot of punches’ in the music biz. 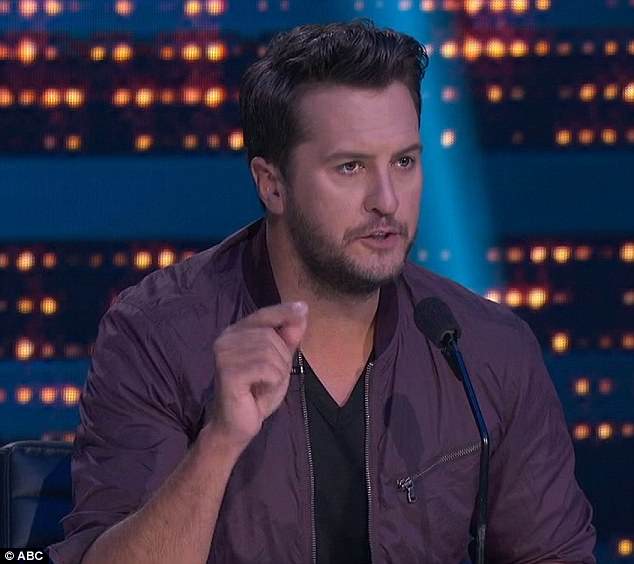 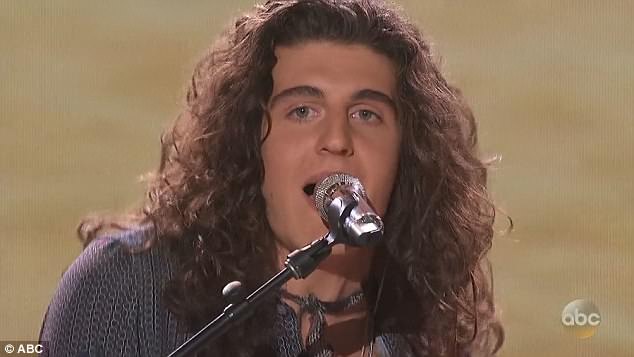 Rock star: Cade Foehner was voted by viewers straight into the top 10

Louisiana teen Garrett Jacobs was in the danger zone.

He attempted to stay in the running with Creedence Clearwater Revival’s 1968 track Have You Ever Seen The Rain.

‘Way to state your case,’ said Luke, who also pointed out some pitch issues. 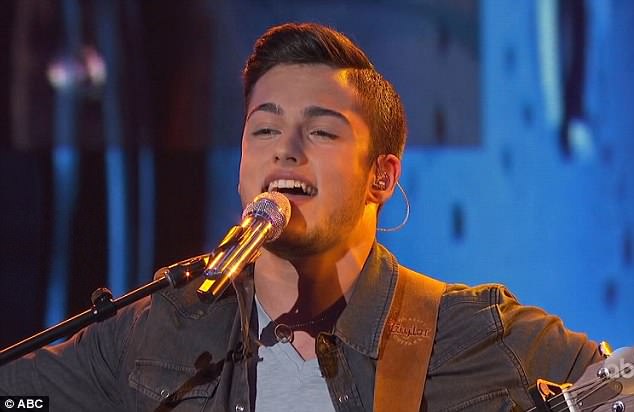 Danger zone: Garrett Jacobs was in the danger zone and sang some Creedence Clearwater Revival in a bid to advance

‘No matter what happens honey, I love you so much,’ consoled Katy.

‘I’m going to fight for you buddy,’ praised Luke. 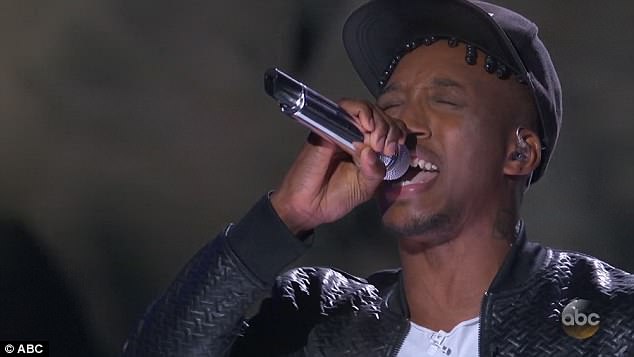 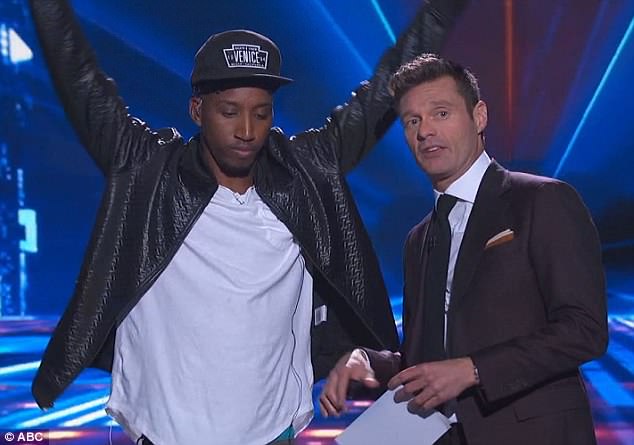 Arms up: The Philly singer raised his arms with Ryan after his performance

Jonny Brenns, an 18-year-old from Florida, sang for his life with Demons by Imagine Dragons.

‘That style of song really suits you the best,’ remarked Luke. 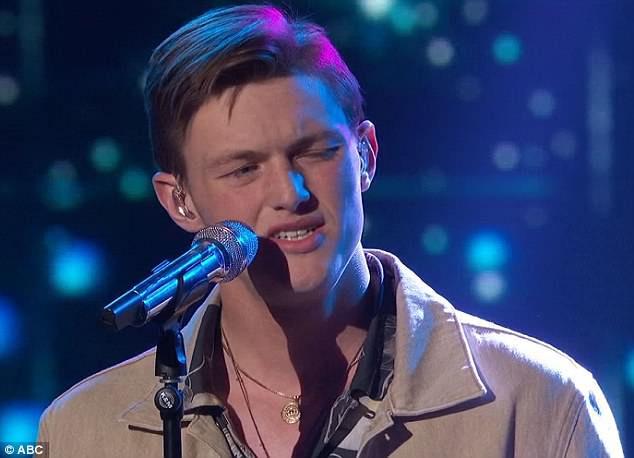 ‘Overnight it looks like you went to Coachella for the first time,’ added Katy.

Georgian 18-year-old Caleb Lee Hutchinson was in the top ten.

His glory song was Getting You Home by Chris Young. 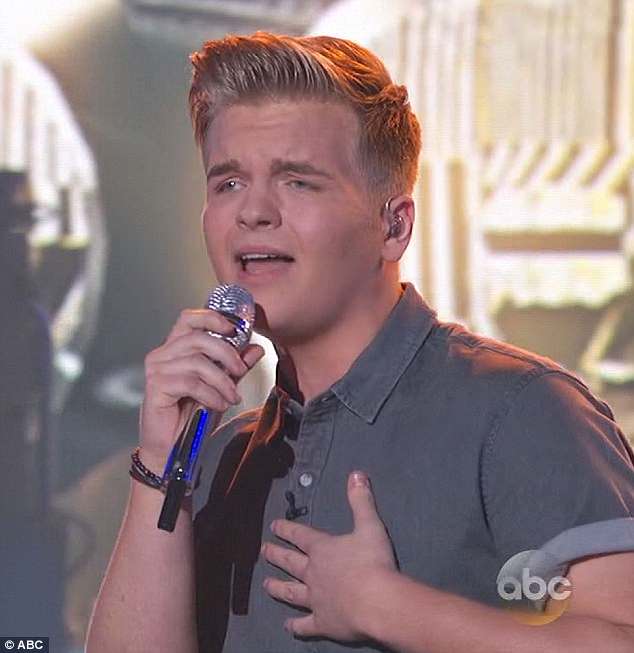 Country singer: Caleb Lee Hutchinson moved into the top 10 and sang Getting You Home by Chris Young

She performed Rihanna’s Love On The Brain.

‘I’m still in shock that America didn’t vote you through,’ sighed Luke. 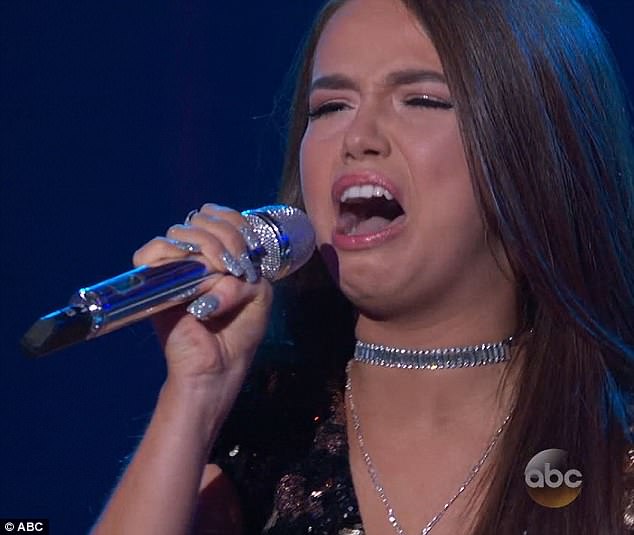 With hopes of making the top 10, Colorado teen Jurnee sang Never Enough from The Greatest Showman.

Philly bowling alley attendant Michael J. Woodard, 20, was voted into the next round. 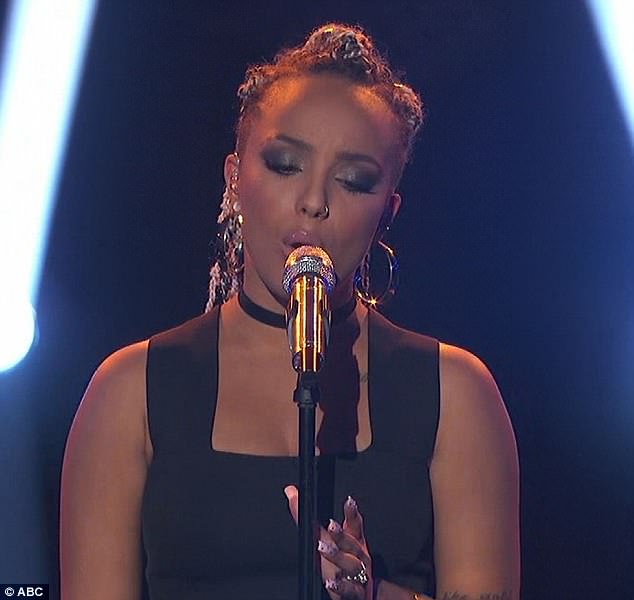 Nailed it: Jurnee sang for survival to Never Enough from The Greatest Showman

His celebratory performance was Believe In Yourself from The Wiz.

Catie Turner was America’s final pick for the top 10. 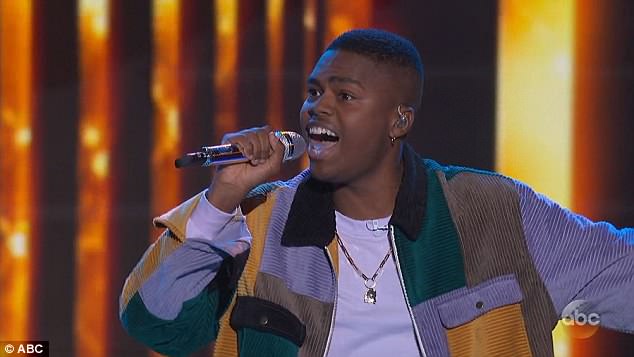 Celebratory performance: Michael J. Woodard performed Believe In Yourself from The Wiz 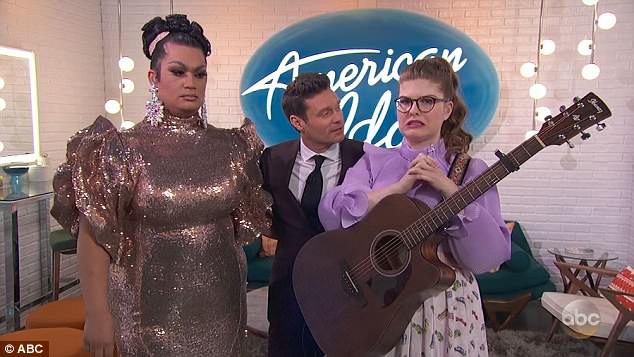 The bubbly 17-year-old Pennsylvanian did Havana by Camila Cabello.

That left 24-year-old Texan Adam Sanders [aka Ada Vox] in the judges hands.

He belted out Jennifer Hudson’s And I’m Telling You I’m Not Going and Katy pulled off her earrings in appreciation. 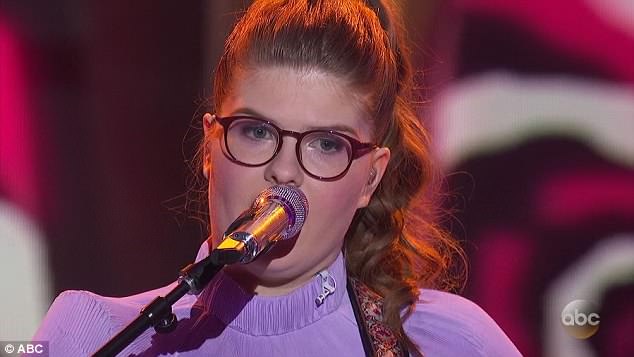 ‘I don’t know everything, I’ve got a lot to learn but I have worked my butt off for over 10 years in the spotlight, and these gentlemen here…I think we do know talent when we see it,’ said Katy.

She then decided to make ‘an executive decision’ to send Ada right to the top 10. 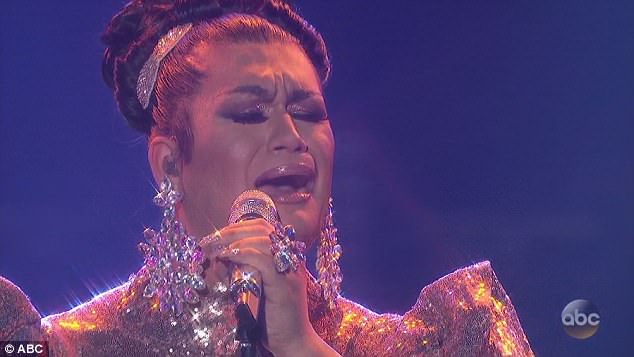 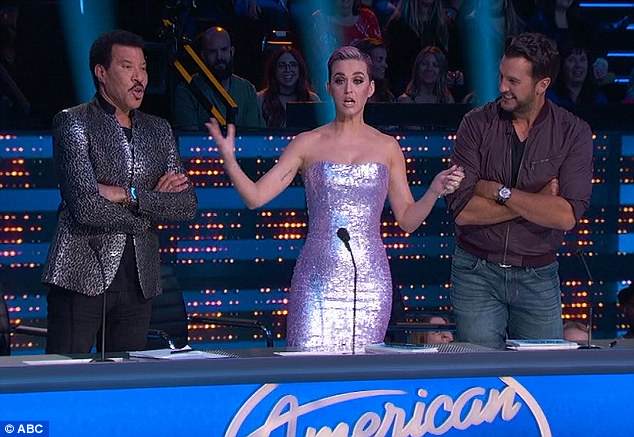 Executive decision: Katy spoke on behalf of the judges and made an executive performance to send Ada to the top 10