An Inspector Calls… A review of The Royal Oak in Yattendon

Yattendon, in Berkshire between junctions 12 and 13 of the M4, is a timely reminder that the death of the English village may have been exaggerated.

Not many people live here, but there’s a shop and Post Office, a hairdresser, a pretty church, a cricket ground and, at the heart of it all, The Royal Oak.

There are ten rooms in this handsome red-brick building, most of which seem to be named after guns.

The Royal Oak, pictured, has ten rooms, most of which seem to be named after guns

We’re in Remington, next to Browning — and there’s a framed print of an advertisement for a Remington model 24 auto-loading rifle in the bathroom and a gun safe in the cupboard.

The room itself is, in estate agent speak, ‘a little tired’, with scuffs here and there, a wonky loo seat and a bathroom floor that’s seen better days.

This might be because the big investment has been the new Orangery downstairs and revamped garden with plenty of alfresco eating opportunities.

Apparently, this has been three years in the planning — and it works, adding a fresh dimension, whereby the front bar and eating area is traditional English pub, while the back is a modern brasserie, with an open kitchen, complete with a rotisserie, Argentine parrilla grill and pizza oven. 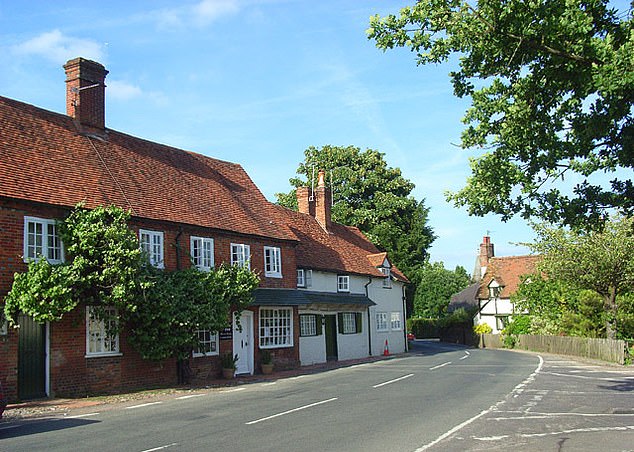 The Royal Oak is located in the Berkshire village of Yattendon, pictured, between junctions 12 and 13 on the M4

We eat outside — and well. A group of three men is at a nearby table, downing pints of local Ramsbury Gold, their dogs sitting contentedly next to them. They look as if they’re gun dogs. One of the men is wearing pink trousers, which seems normal in these parts.

My rotisserie chicken and chips is delicious and my wife is so impressed by her flat iron steak that she asks the waitress if it is indeed a flat iron steak or a superior cut. Flat iron it is.

When we come down for breakfast in the morning, a small army of cleaners is going about the place with mops and hoovers and they all seem so cheerful.

The Royal Oak has taken on a new lease of life since our last visit more than ten years ago — and deservedly so.

The Royal Oak, The Square, Yattendon, Berkshire RG18 0UF. Doubles are from £99. For more information contact 01635 201 325 or visit royaloakyattendon.co.uk