Anniversary trips: As Wills and Kate mark 10 years of marriage, where to go for romantic milestones

Wedding anniversaries are traditionally marked with a gift between couples that starts with paper after the first year then progresses to diamonds at the 60th.

But why not use the associated present as an excuse to go travelling?

SPLURGE: Snuggle up in a luxury log cabin at the Arctic Retreat eco-lodge in Swedish Lapland.

Four nights including flights to Lulea, transfers and full board costs from £2,471pp (discover-the-world.com).

ON A BUDGET: Have some fun in the forest staying in an off-grid designer treehouse in the Welsh mountains near Machynlleth. From £379 for two nights, self-catering (living-room.co).

SPLURGE: Mexico is famous for its tin art, known as hojalata, crafted in creative cities such as Oaxaca.

A 14-day ‘Cultural Heartlands to Caribbean Coast’ tour flying into Mexico City and back from Cancun costs from £2,710pp (journeylatinamerica.co.uk).

ON A BUDGET: Slip away to Tintagel on the north Cornish coast, a cliff-top English Heritage site with links to King Arthur. The Landmark Trust has cottages in nearby Coombe from £321 for four nights, self-catering (landmarktrust.org.uk). 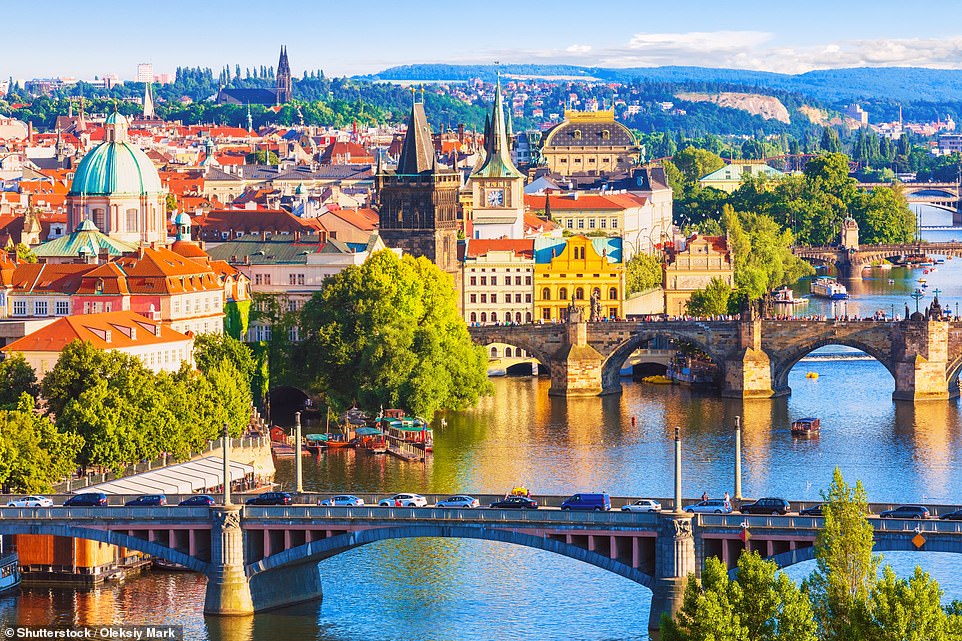 For a 15th wedding anniversary, when couples traditionally exchange crystal, head to Prague, pictured, which is renowned for its Bohemian crystal and glass

ON A BUDGET: The Czech Republic is renowned for its Bohemian crystal and glass, which you can pick up on a short break to Prague. Stay at the regal Hotel NH Collection Prague Carlo IV from £122 B&B (nh-hotels.com).

SPLURGE: This anniversary is the best reason to visit this fascinating country, with classic sights such as the Great Wall and Terracotta Army. An 11-night ‘Highlights of China’ tour costs from £2,795pp (bambootravel.co.uk).

ON A BUDGET: Potter through the Potteries on a narrowboat with a stop at Barlaston to visit the Wedgwood store and factory. Starting from Stone, near Stoke-on-Trent, a three-night self-catering break on a canal boat for two costs from £462 (canalcruising.co.uk).

SPLURGE: Celebrate with a trip-of-a-lifetime cruise to Antarctica with Silversea. A 16-day voyage aboard Silver Cloud, sailing from Punta Arenas in Chile with three days exploring the Antarctic Peninsula, costs from £12,870pp (silversea.com).

ON A BUDGET: Escape to Portugal’s less-visited Costa de Prata (Silver Coast), which lies between Lisbon and Oporto. Pick up a car and explore independently, staying in pousadas (hotels of historic interest) from £103 B&B (pousadas.pt).

SPLURGE: Head to the twin islands of Ra’iatea and Taha’a in French Polynesia. Here you can visit pearl farms and buy your jewel from the source. Seven nights at Le Taha’a by Pearl Resorts costs from £3,849pp B&B (turquoiseholidays.co.uk).

ON A BUDGET: Normandy’s Cote de Nacre (Mother-of-Pearl Coast) is easily reached by taking a ferry from Portsmouth to Caen then driving west. Hotel Tardif is a handsome property in Bayeux with B&B doubles from £130 (hoteltardifbayeux.com). 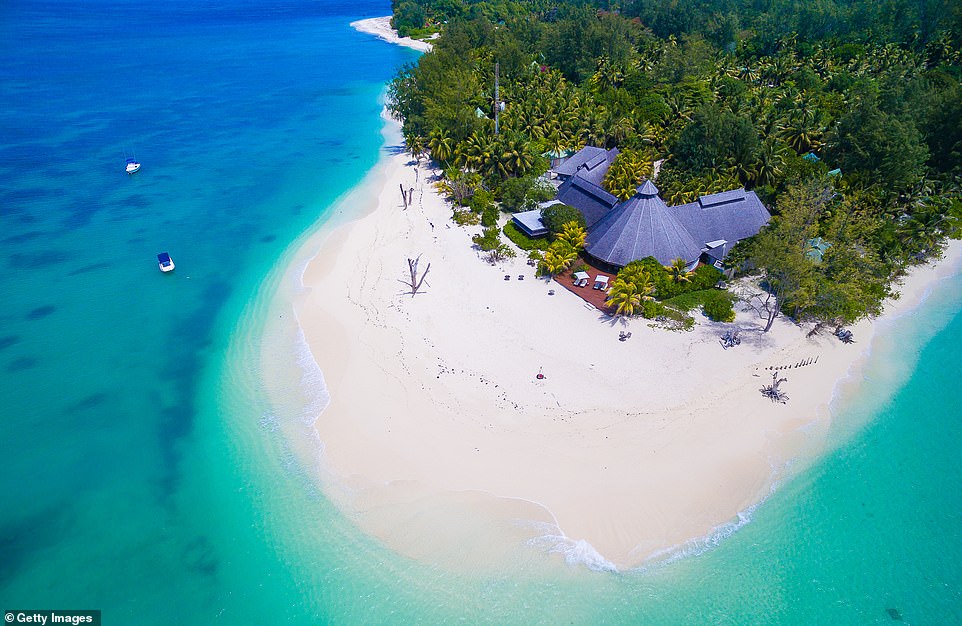 Coral is traditionally exchanged on 35 years of marriage. The Seychelles has more than 70 coral islands. Pictured is Denis Private Island

ON A BUDGET: Claigan Coral Beach is one of the best sweeps of sand on the Isle of Skye. Four-and-a-half miles away, the Dunvegan hotel is a friendly base with six bedrooms, all with ensuite shower rooms. Doubles from £140 B&B (thedunvegan.com).

SPLURGE: India is a treasury of precious stones including glossy red rubies. A 14-day tour of Rajasthan, including a private visit to the Gem Palace in Jaipur, costs from £3,880pp (greavesindia.co.uk).

ON A BUDGET: Take a spin around the Norfolk Broads aboard Ruby Light, a 29ft luxury cruiser. A four-night break costs from £475 (herbertwoods.co.uk). 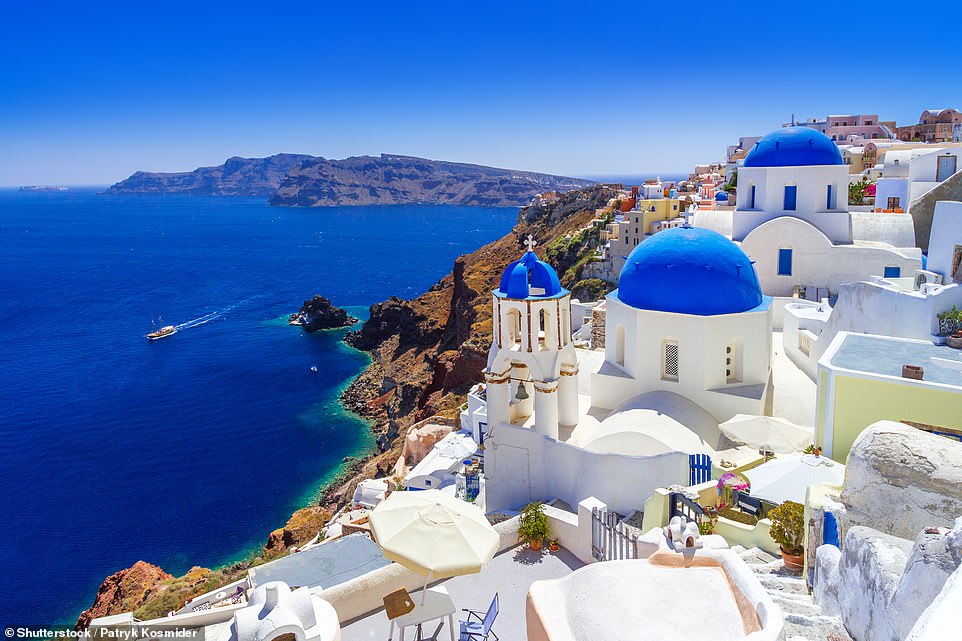 Check into the dazzling white Sapphire suite at Adamant Suites on the Greek island of Santorini, pictured, to mark 45 years of marriage

SPLURGE: Sri Lanka has produced some outstanding sapphires. An eight-night tour of the country, including a stop in its jewel capital Ratnapura to see how the stones are made into jewellery, costs from £4,150pp (srilanka-bespoke.com).

ON A BUDGET: Fly to the Greek island of Santorini and check into the dazzling white Sapphire suite at Adamant Suites in Fira, from £242 B&B (adamantsuites.com).

SPLURGE: It’s all about sunshine, sport and the beach on Australia’s Gold Coast, an hour’s drive south of Brisbane. Spend a few days here then drive north to Cairns in a motorhome exploring Queensland. Fourteen nights, including ten on the road, costs from £1,299pp (trailfinders.com).

ON A BUDGET: Kate Middleton’s wedding ring is made from Welsh gold — and you can visit the National Trust’s Dolaucothi mine in Carmarthenshire. An hour’s drive north, Nanteos is a Georgian country house hotel with suites from £139 B&B (nanteos.com). 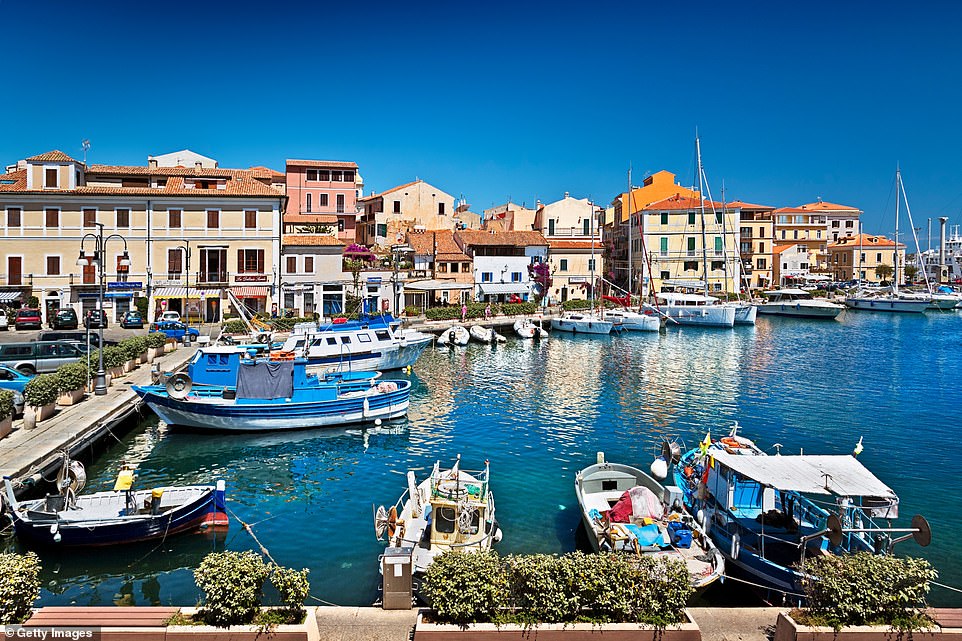 SPLURGE: Head to the Emerald Isle for some fine Irish hospitality. Forty miles south of Knock airport, Ashford Castle is a splendid country estate that was once the home of the Guinness family. From £594 B&B (ashfordcastle.com).

ON A BUDGET: Explore the coves and limpid waters of Sardinia’s Costa Smeralda (Emerald Coast). Petra Segreta is a secluded luxury resort in the hills above San Pantaleo, costing from £164 (petrasegretaresort.com).

SPLURGE: South Africa is a rich source of diamonds and a terrific place for a winter sun holiday with no jet lag. Seven nights combining a safari at Sabi Sands Private Game Reserve with time in Cape Town, including a tour of a diamond workshop, costs from £2,995pp (africatravel.com).

ON A BUDGET: Walk part of the Diamond Way a 60-mile trail in the Cotswolds. The route starts at Moreton-in-Marsh where the homely Manor House hotel has rooms from £145 B&B (cotswold-inns-hotels.co.uk).