ANZAC Day: Aussies pour into pubs and party the public holiday away with two-up and slabs of VB

Aussies have poured into pubs to play two-up and chug slabs of Victoria Bitter after hundreds of thousands flocked to ANZAC Day services to pay tribute to diggers past and present.

Monday marked the first full-scale ANZAC Day commemorations since 2019 after the Covid-19 pandemic stymied the size of public gatherings.

After curtailed ceremonies for the past two years, thousands packed into dawn services across the nation, including at Martin Place in Sydney, Currumbin on the Gold Coast and Melbourne’s Shrine of Remembrance, to pay respect to service men and women.

And afterwards, many packed into pubs to enjoy rounds of two-up and to have a drink with friends. 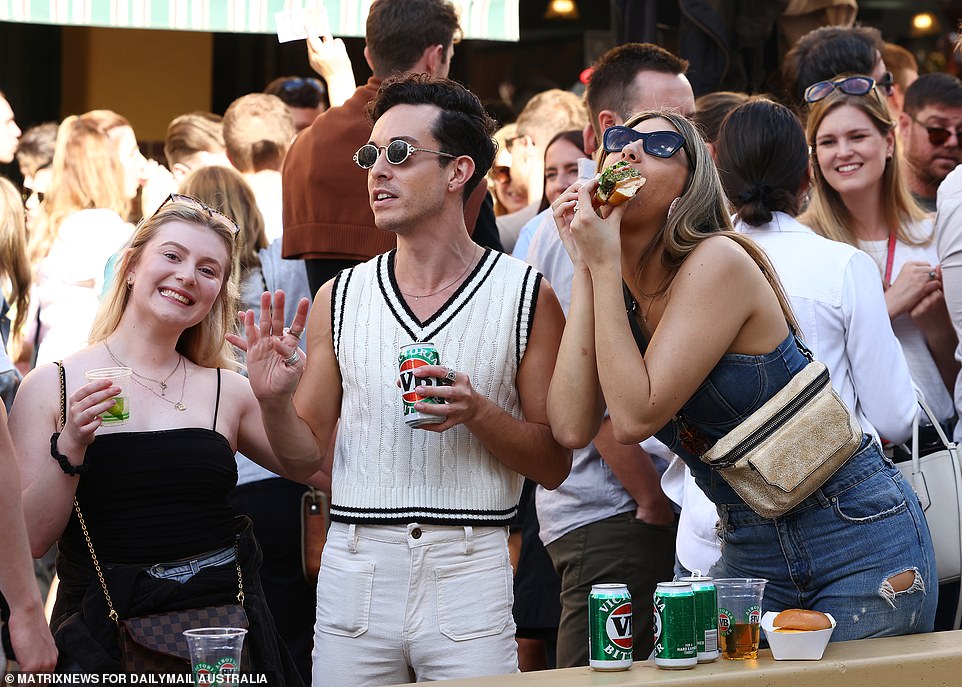 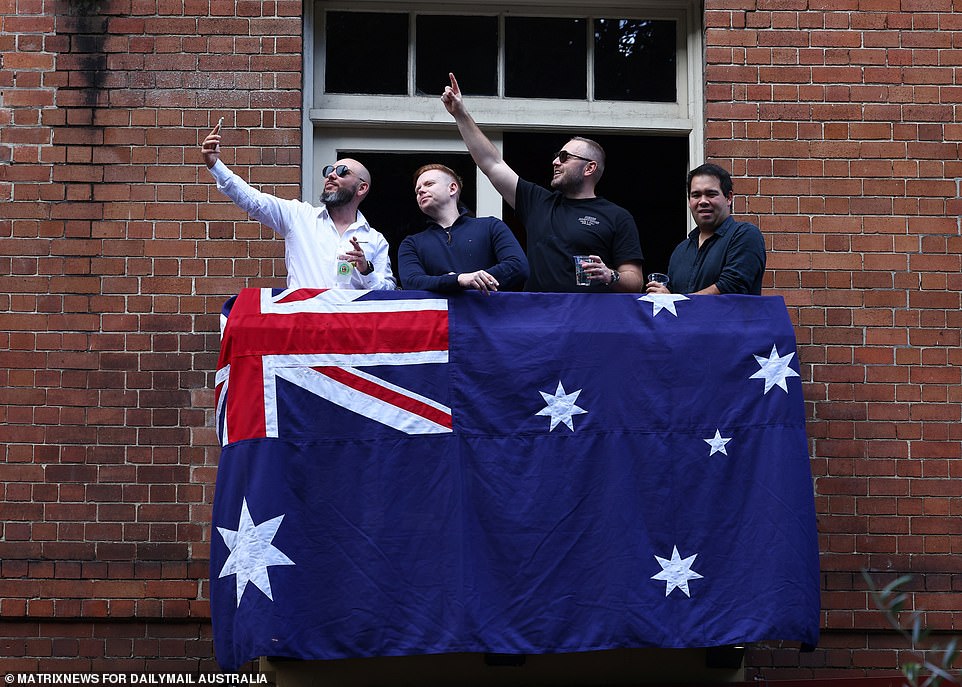 A group of men take selfies as they enjoy some drinks on a balcony, which was decorate with the Australian flag 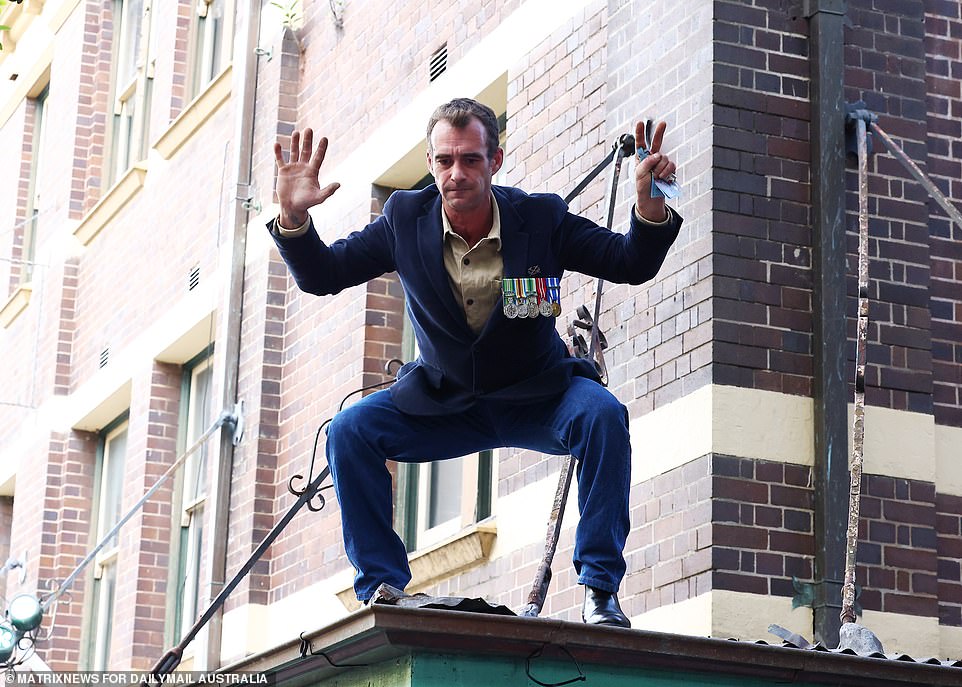 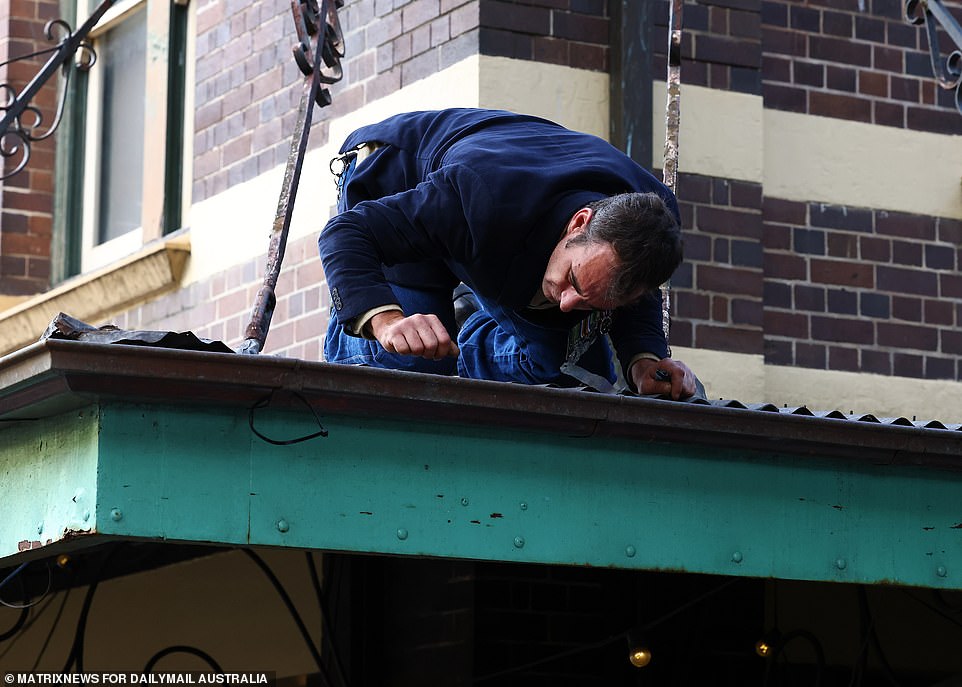 In Sydney, throngs of revellers wearing their Sunday’s best piled into pubs throughout the CBD to try their luck at the traditional Australian gambling game.

Rowdy punters could be seen gathering around spinners as they tossed the coins in the air, with the victors cheering as soon as their winning bid hit the ground.

One man wearing war medals scaled the roof of the Mercantile Hotel in the rocks, giving bystanders a peace sign as he clasped a handful of cash before buckling to his knees. 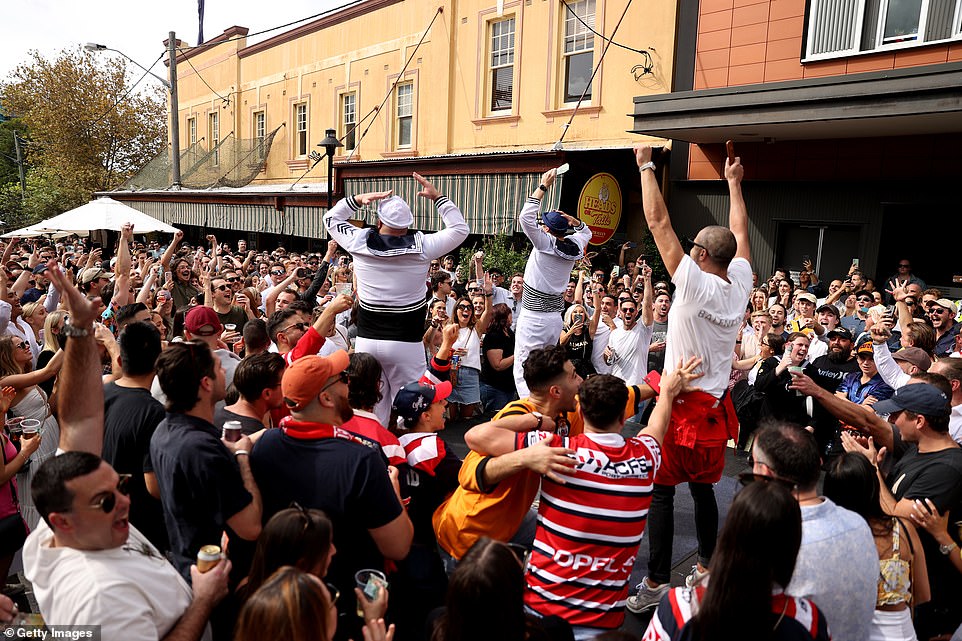 Prime Minister Scott Morrison led commemorations in Darwin, where he used his address to warn Australians of a ‘changing of the world’ amid the ongoing Russian invasion of Ukraine and China’s new security pact with Solomon Islands.

‘War does strike Europe again, coercion troubles our region once more, an arc of autocracy is challenging the rules-based order our grandparents secured and democratic free peoples are standing together again,’ the Prime Minister said. 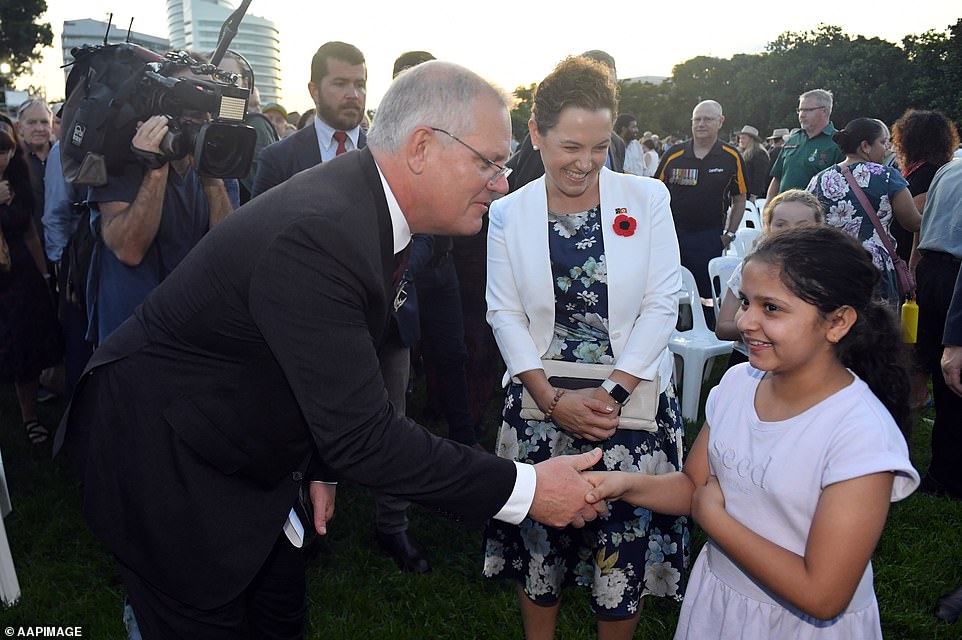 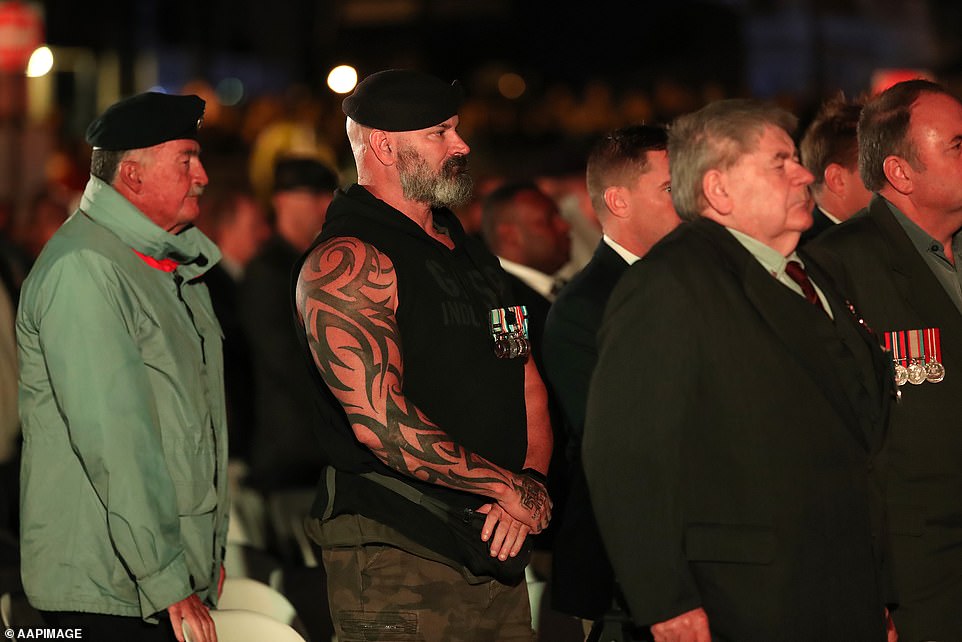 ‘In facing this world, we must remember again, it is only then we truly appreciate what these times require of us all.’

Mr Morrison reminded Australians they are one and free because of the sacrifices of servicemen and women who fought for their country as he reiterated the nation’s united stance with Ukraine.

‘To veterans and all serving Australians with us today, we owe a debt and sense of gratitude that we can never express fully enough,’ he said.

‘We gather at this dawn to remember, to reflect and rededicate ourselves.’

‘As General Jim Molan, our colleague in the Parliament, who said ‘it takes a nation to defend a nation’. 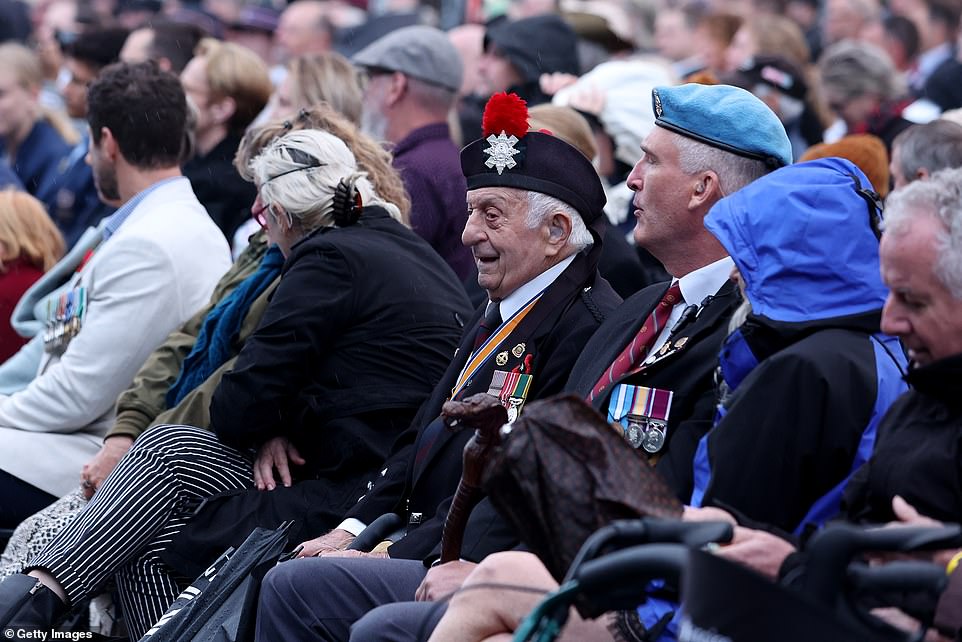 For many veterans in attendance, it was the first dawn service they’ve been to since 2019. Pictured are war veterans at the Currumbin dawn service 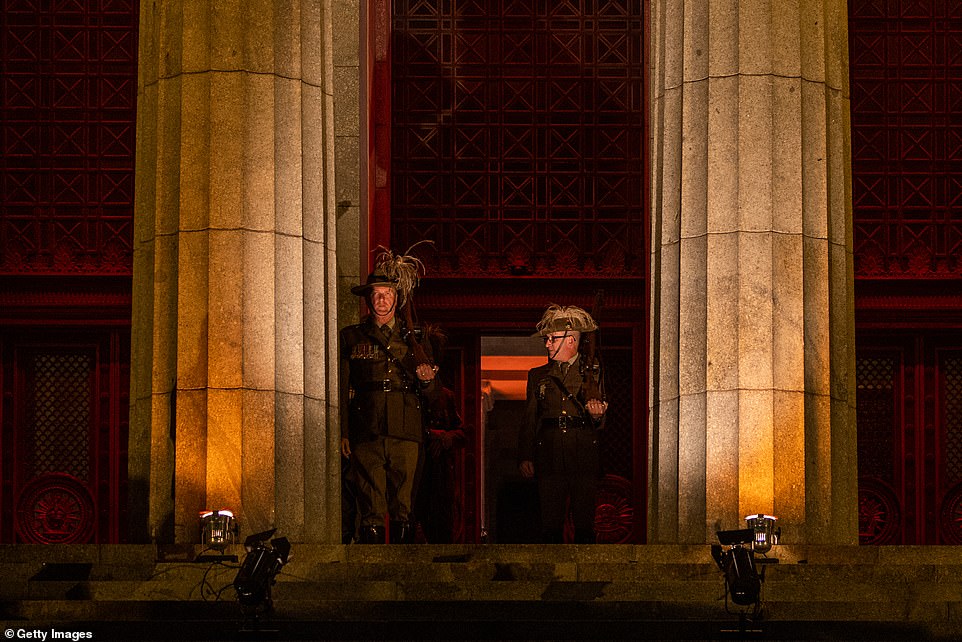 50,000 Melburnians braved chilly conditions at the Shrine of Remembrance on Monday

‘And what ultimately matters in that task is a people with a fierce and protective love of their nation and their liberty. A love of home, family, community and country.

‘A willingness to live for all of these things that are necessary to sacrifice for something far greater than themselves.

Mr Morrison happily mingled and posed for photos with Darwin locals after the dawn service as he entered the third week of the federal election campaign. 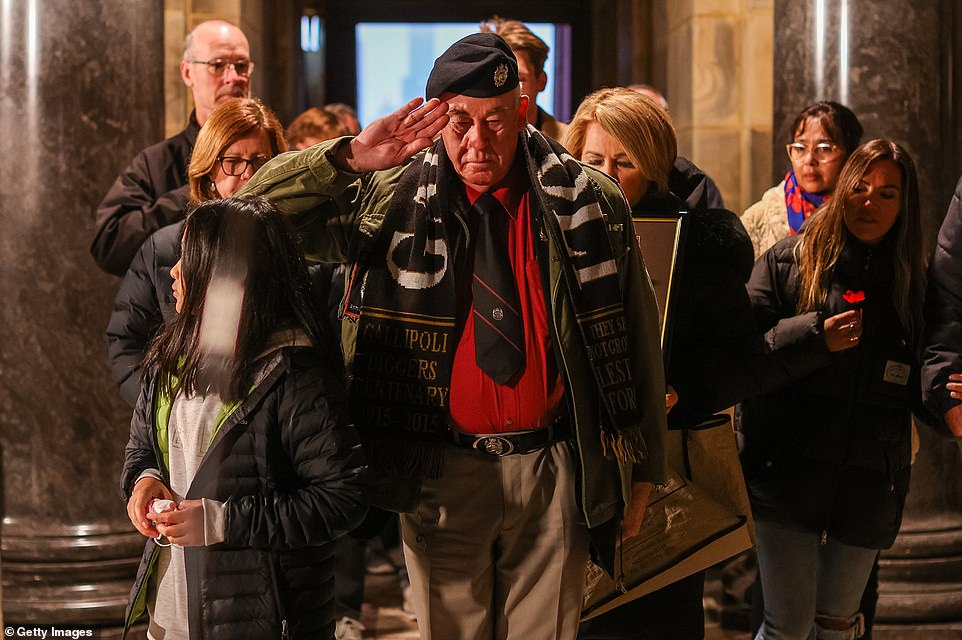 He said the Australian character was confirmed at Gallipoli and since then Australians had ‘stood steadfast as warriors and as builders and keepers of the peace’.

‘Yet as the war in Ukraine so tragically reminds us, darkness is not vanquished from the world,’ he said.

Across the Tasman, thousands of Kiwis joined New Zealand Prime Minister Jacinda Ardern for a service at the Auckland War Memorial Museum.

Gallipoli, the site of the Australia’s most disastrous wartime endeavour, has also welcomed back thousands of Australians and Kiwis for the first time since 2019. 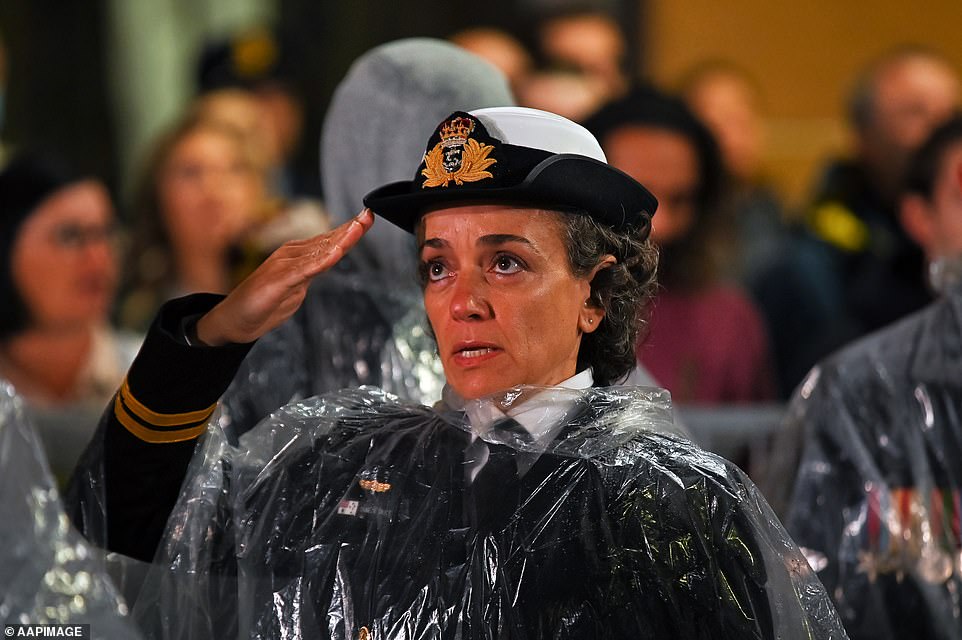 In Sydney, thousands braved the rain to fill Martin Place to capacity for the solemn service which marked the 95th anniversary of the first dawn service held there.

NSW Premier Dominic Perrottet attended with two of his seven children and led commemorations by reciting the poem Salute, penned by Sydney Elliott Napier, who served with the First Australian Imperial Force during World War I.

Major General Matthew Pearse reminded the crowd of a number of significant anniversaries in 2022.

They include the 80th anniversary of the Bombing of Darwin, the Fall of Singapore, the Battle of the Coral Sea and the Kokoda campaign. 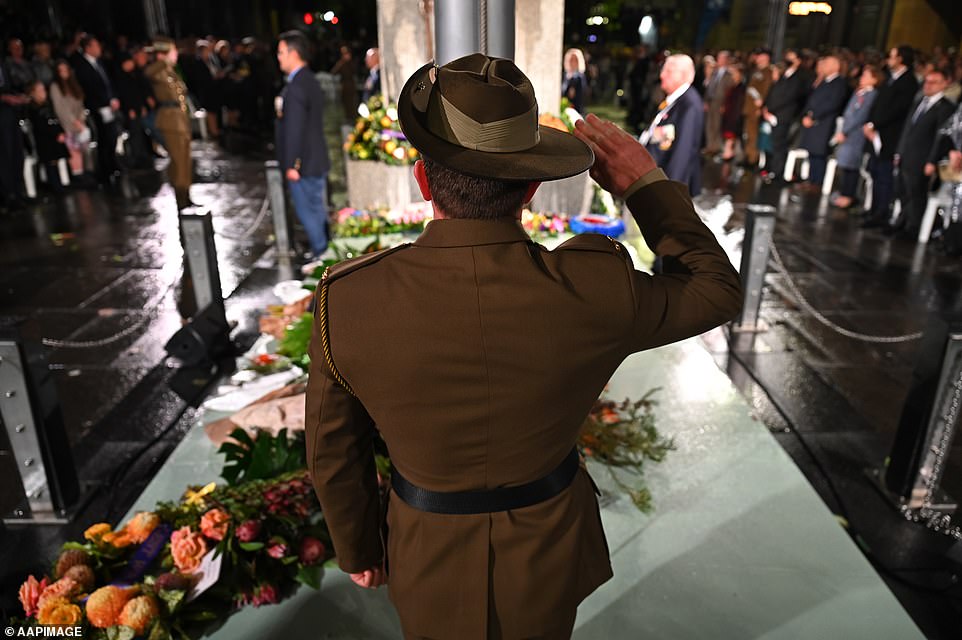 In Martin Place, Sydneysiders were reminded of a number of significant anniversaries in 2022 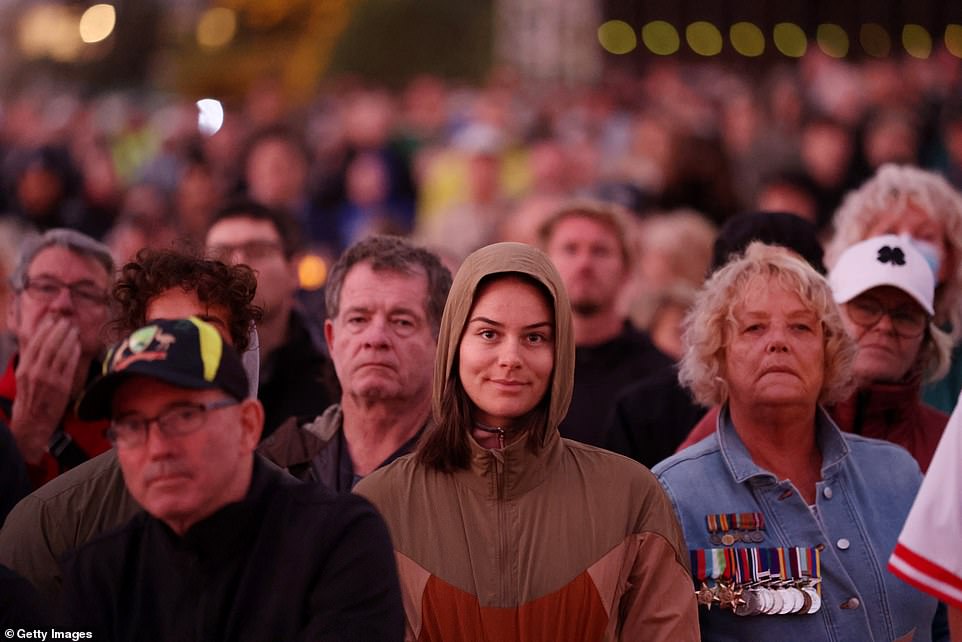 On the Gold Coast, Australians of all ages packed Currumbin’s foreshore to commemorate Anzac Day 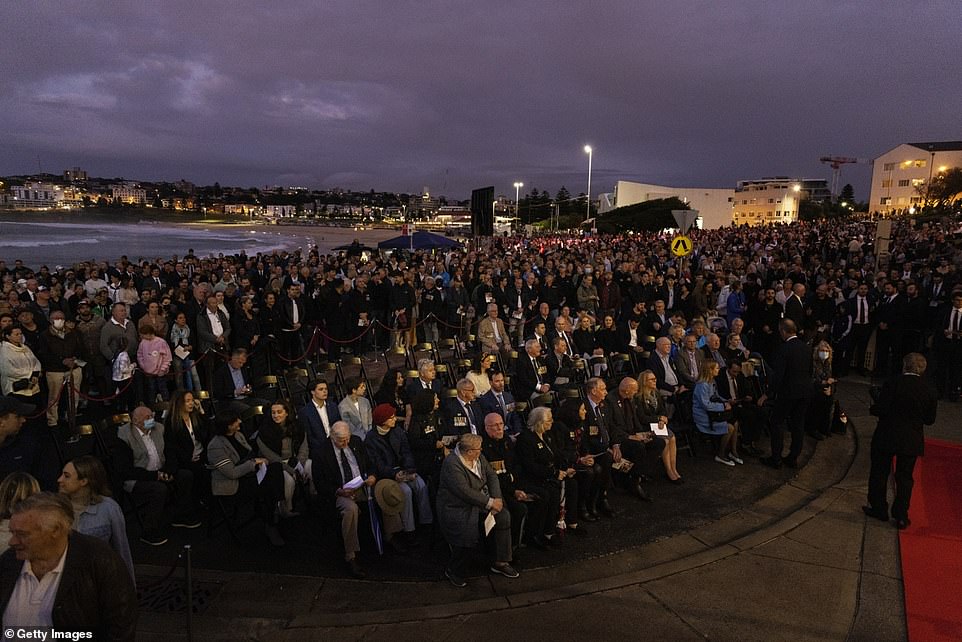 There were similar scenes at dawn services across Sydney, including North Bondi (pictured)

He added it was a day to give thanks for all veterans ‘for their service, their sacrifice and their resilience’.

‘They’re filled with stories of ordinary Australians who pulled together despite adversity to support their mates and put their lives on the line to defend our national interests and secure a brighter future,’ the commander of Forces Command said.

Thousands more gathered at local dawn services across the city, including massive crowds at North Bondi.

Thousands also braved the rain on the Gold Coast as they gathered on the Currumbin foreshore to pay their respects.

There were similar scenes in Melbourne, where 50,000 braved the chilly conditions to pay their respects to the fallen at the Shrine of Remembrance.

It was the biggest crowd there since the centenary of Gallipoli in 2015. 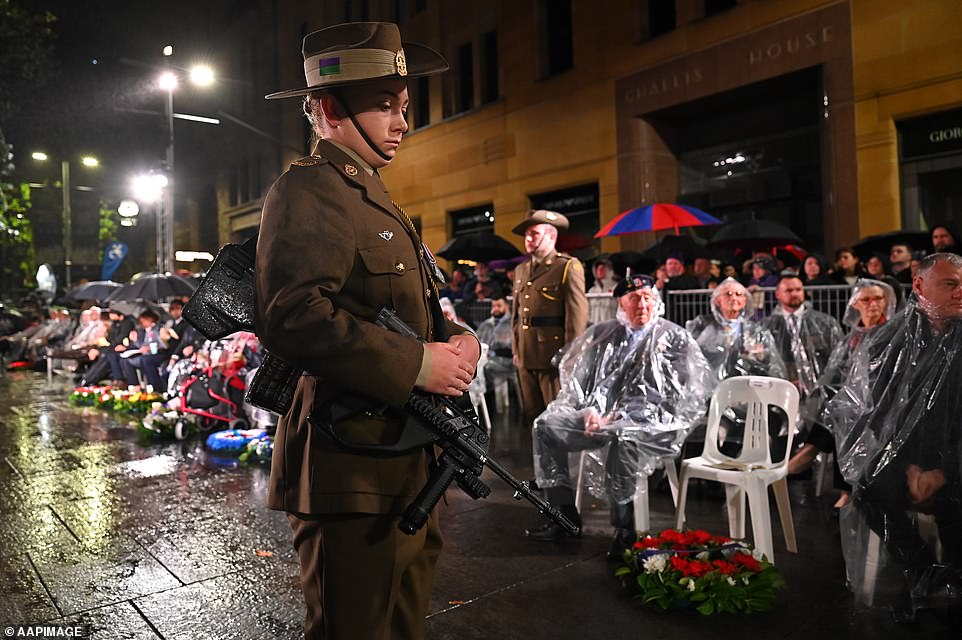 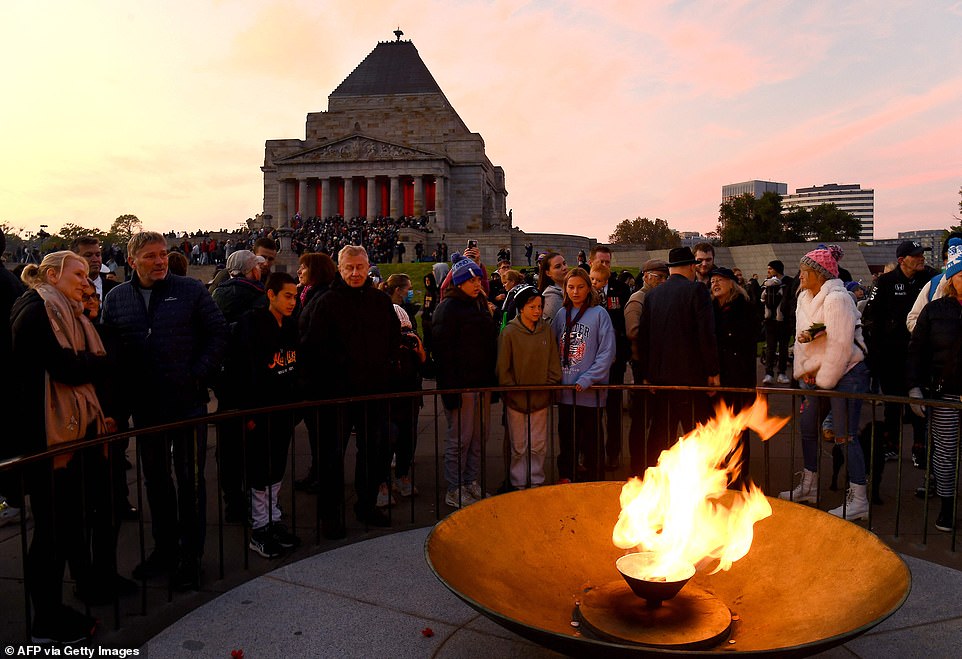 RSL Victoria state president Robert Webster expected numbers to be slightly down on pre-pandemic crowds due to the long weekend and school holidays.

‘But one of the messages that we’ve been giving to the broader community is that we’ve got 270-odd sub-branches across the state, most of whom will be running a dawn service or a local march,’ he told AAP.

Dr Webster said Covid restrictions in recent years was hard on veterans who see Anzac Day as a time to reflect and catch up with mates.

Governor-General David Hurley delivered an address to the nation from the Australian War Memorial in Canberra following the ANZAC Day march.

This year marks the 80th anniversary of Anzac Day commemorations at the memorial. 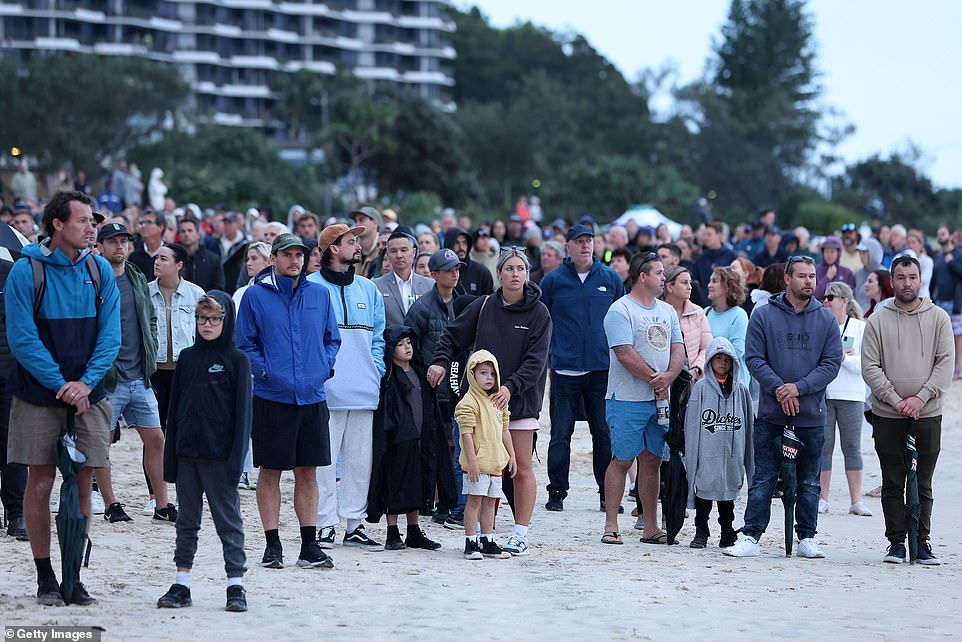 NSW has temporarily lifted the ban to allow two-up to be legally played in pubs, clubs, and elsewhere across the entire three-day Anzac Day long weekend.

The one-off aims to give back to veterans who missed out during the Covid-19 pandemic at the biggest Anzac Day commemoration since 2019.

Australian soldiers regularly played the coin toss betting game in trenches and on troopships during World War I, after it was originally played by immigrants and convicts in the 1850s goldfields.

The game involves a designated ‘spinner’ who throws two coins or pennies into the air as players bet on whether the coins will land on heads or tails. 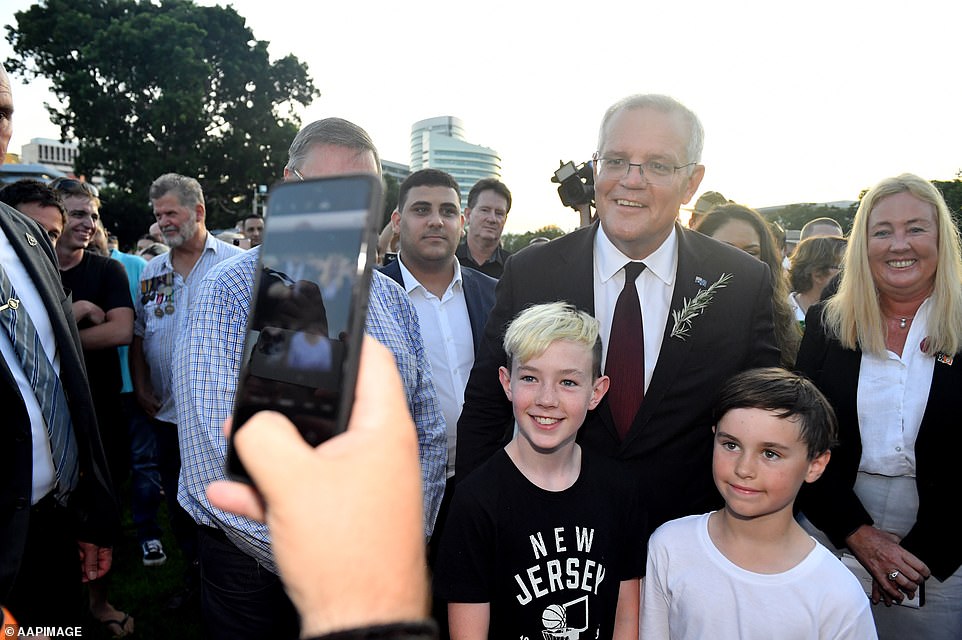