The loyal wife of footballer Apisai Koroisau has flown in to Queensland to join the NRL hub as officials investigate whether he breached biosecurity protocols by sneaking another woman into State of Origin camp.

Daily Mail Australia exclusively revealed on Thursday that Koroisau allegedly put the entire NRL competition at risk by smuggling a woman he met on Instagram into the Blues hotel on two occasions.

Korosiau’s wife Amy, who found out about her husband’s indiscretion when the woman contacted her on social media last week, travelled with the couple’s two young daughters to Coolangatta on the Gold Coast on Wednesday to join her husband and his team.

In addition to juggling three backpacks, Amy had her youngest daughter Kalesi strapped to her chest and kept a close eye on her eldest, Miliana, who walked alongside her off the tarmac and toward the shuttle bus.

Dressed casually in a black long-sleeved top, blue jeans and sneakers, Amy enlisted the help of a friend when she ran out of hands to carry her belongings.

Miliana, who proudly represented her dad’s football team by wearing a Penrith Panthers skirt, helped out by carrying her own Paw Patrol backpack off the plane.

The family will spend 14 days in hotel quarantine at a Gold Coast hotel before moving north to the Sunshine Coast, where Koroisau and his teammates are based. 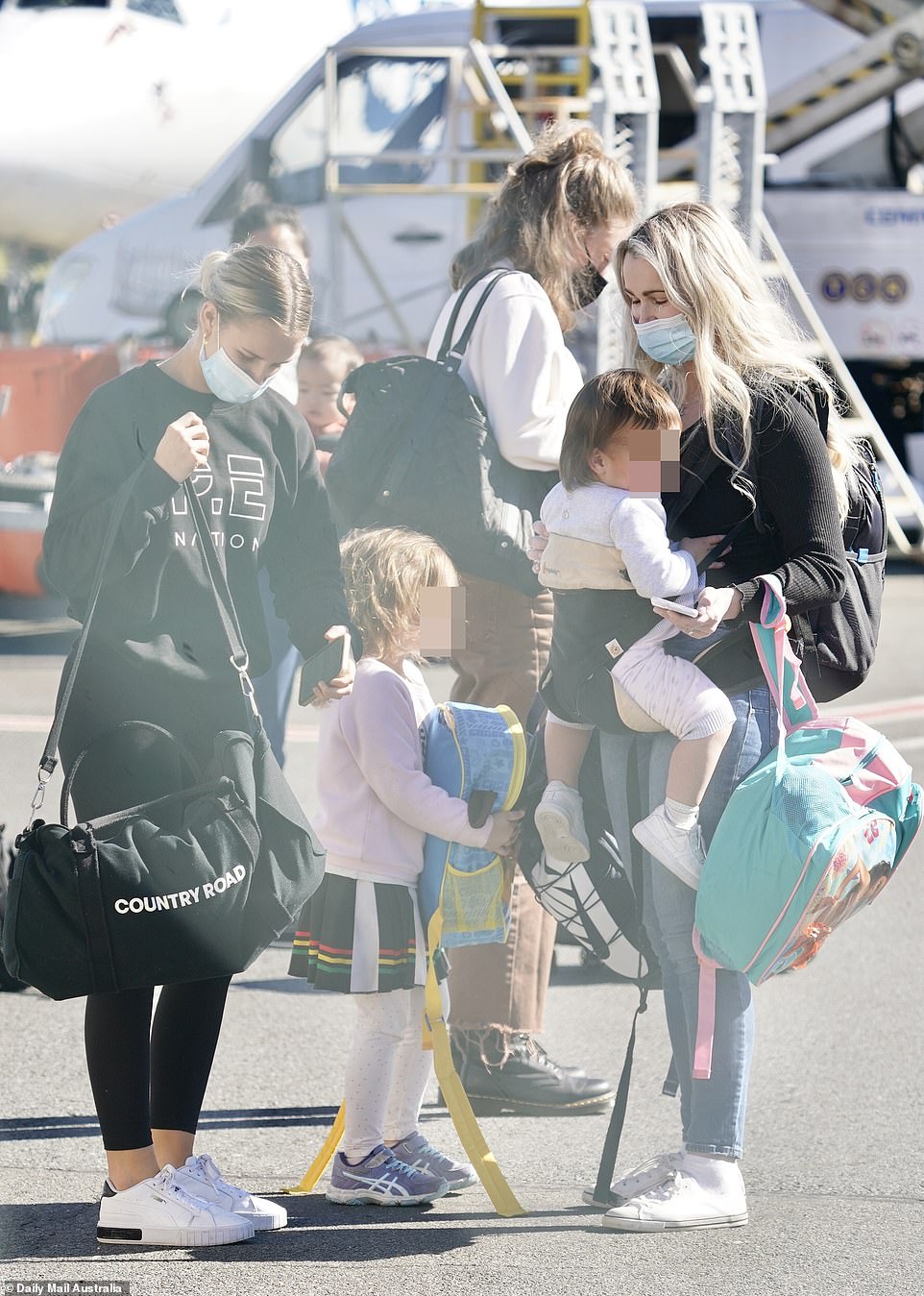 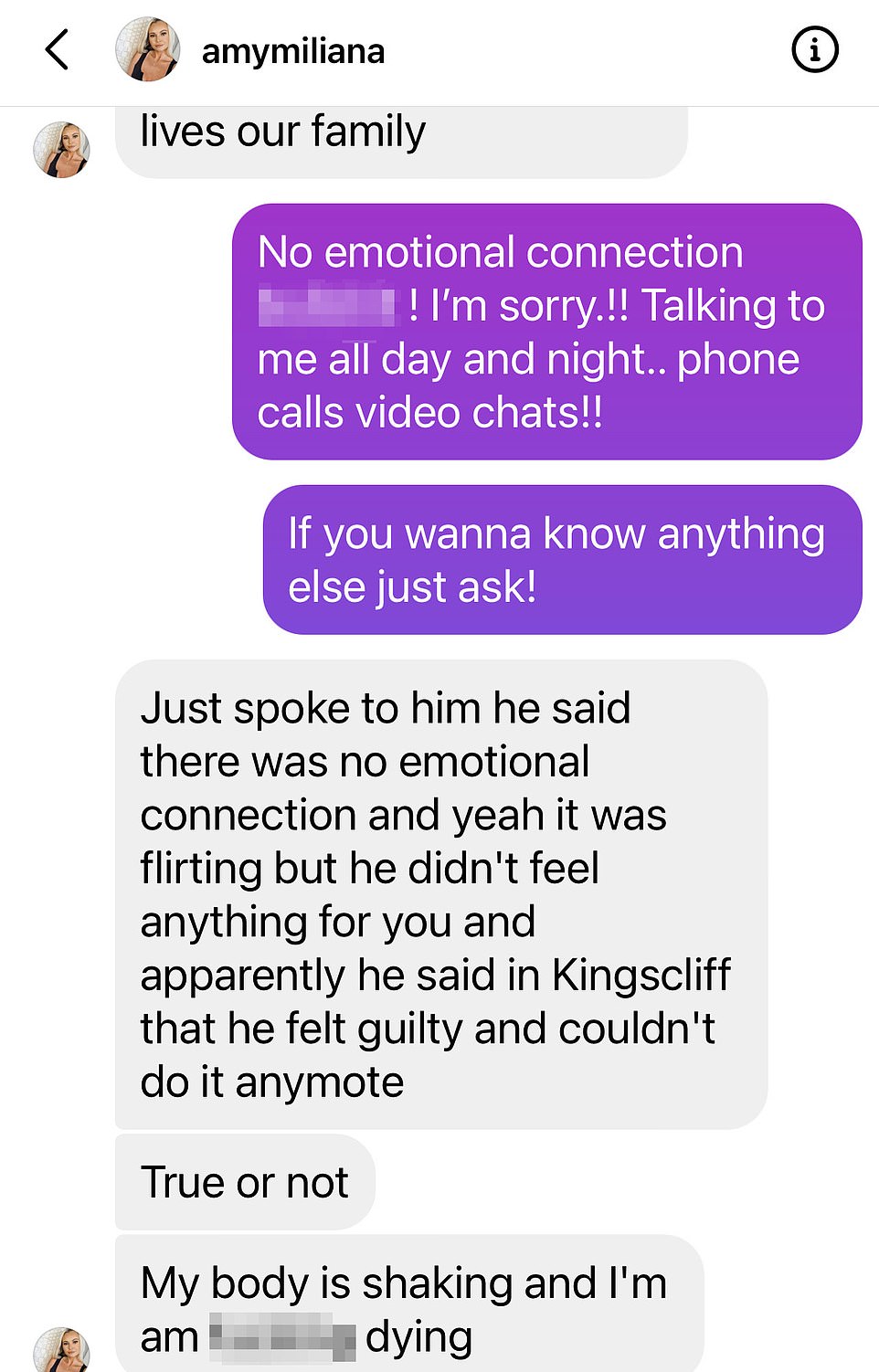 Broadcaster Ray Hadley told his 2GB audience the code had to come down hard on Koroisau if he was found to have breached the biosecurity bubble.

‘The NRL has a very big job to do here,’ Hadley said on Friday morning. ‘Whatever they do with the bloke probably won’t be enough.

‘He’s put the entire game at risk and they should deal with him appropriately. I don’t want to see a slap on the wrist.’

NRL boss Peter V’landys warned heavy penalties would be imposed if the allegations against the Penrith Panthers hooker were proven true.

‘Anyone who’s breached the bubble and put the game and the income of fellow players at risk will be heavily penalised, if the allegations are proven true,’ Mr V’landys said.

Koroisau is still in the Panthers line up for their game against Brisbane on Saturday, but coach Ivan Cleary said they’ve got ‘contingencies in place’ with back up hooker Mitch Kenny prepared to step into the starting side should the NRL impose immediate sanctions.

‘The one thing we do know on the moral side of things, which I don’t feel like that’s appropriate for me to talk about. I’m certainly not going to discuss anything there, but as a club we’ll come out with a statement once the NRL has finished their investigation,’ he said on Friday morning.

‘What I will say we are doing everything we possibly can to support Amy (Koroisau’s wife) at this time and we’ll continue to do so.’

Daily Mail Australia revealed Koroisau allegedly snuck the woman into the Blues camp on June 20 – one day before the team was moved to Kingscliff, in northern NSW, to escape Sydney’s rampant Covid outbreak.

The married father-of-two allegedly also met up with the woman on a second occasion, on the day of Game 2, when the team was in a ‘bubble’ to prevent any potential exposure to the virus.

The woman claims Koroisau gave her ‘strict’ instructions on how to sneak into camp without being noticed. 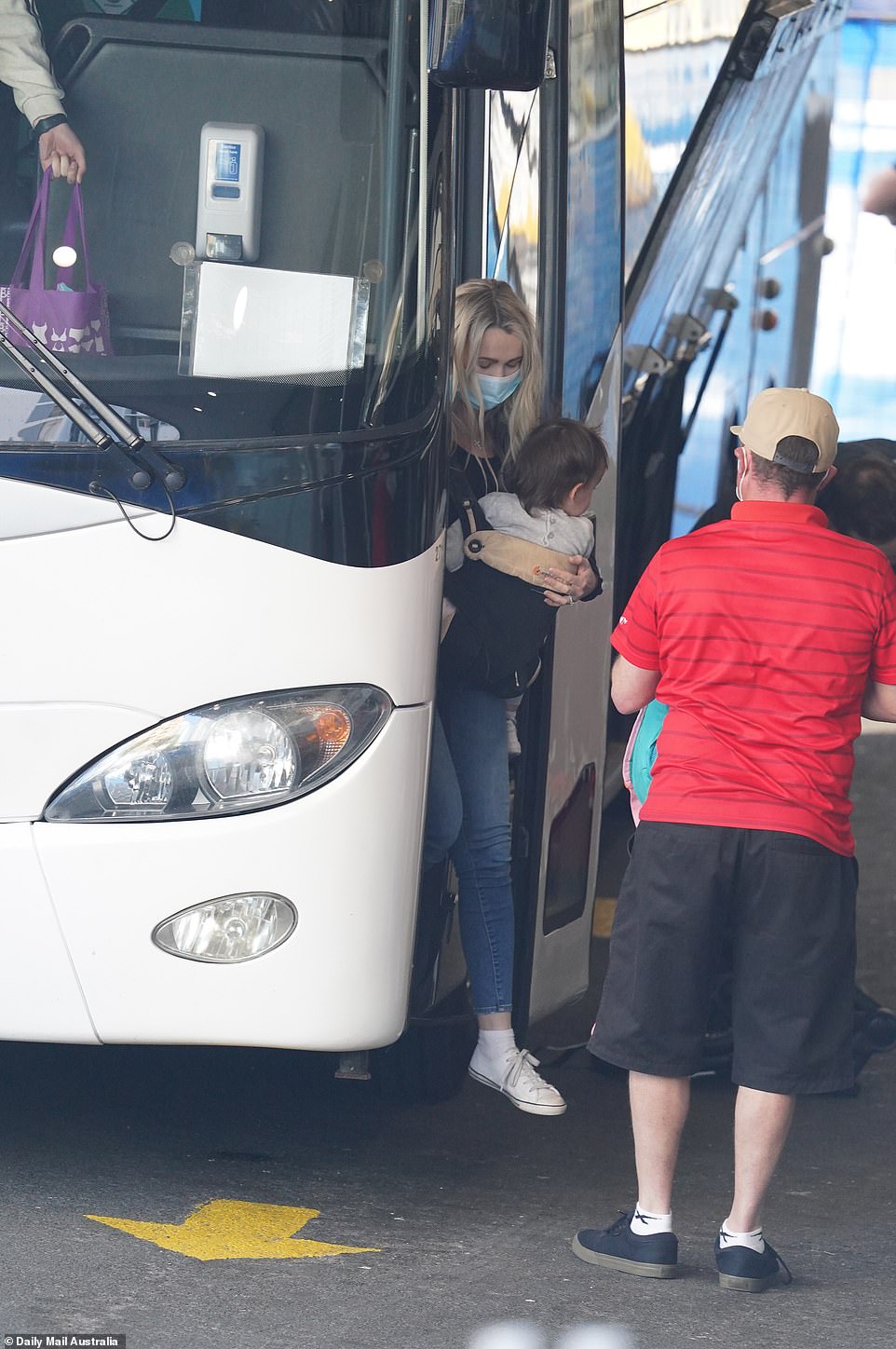 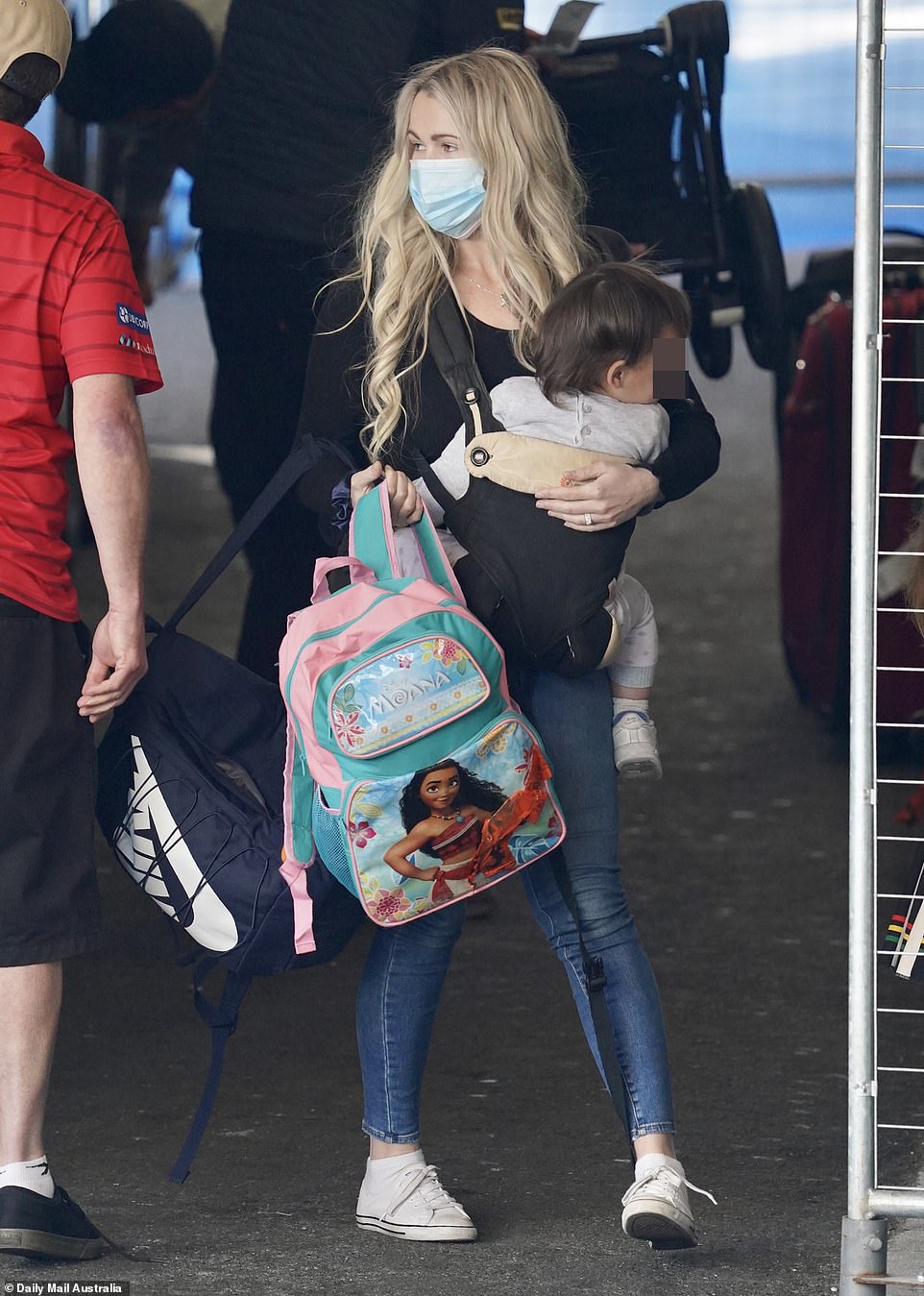 Ms Koroisau  is aware of the allegations against her husband, and has joined him in the Queensland Covid hub

They planned to meet a third time but the woman claimed Koroisau put an end to the dalliance hours before she was due to arrive after Jai Arrow was unceremoniously dumped from the Maroons camp over a similar incident involving a female dancer being invited back to his hotel.

Koroisau’s agent said Amy would not be commenting on the alleged affair, and both she and her husband have since shut down their social media accounts.

The woman, who asked not to be named, said she met Koroisau on Instagram in June, and he quickly prompted her to message him on Snapchat instead.

Over the course of a few days and their two meetings, she ‘developed feelings’ for him, claiming she fell for his ‘sweet, nice, caring’ personality.

‘I actually started to have little feels for him,’ she said. ‘He came across like such a sweet nice caring guy who gave me a lot of attention and sweet words.. I definitely got sucked in!’ 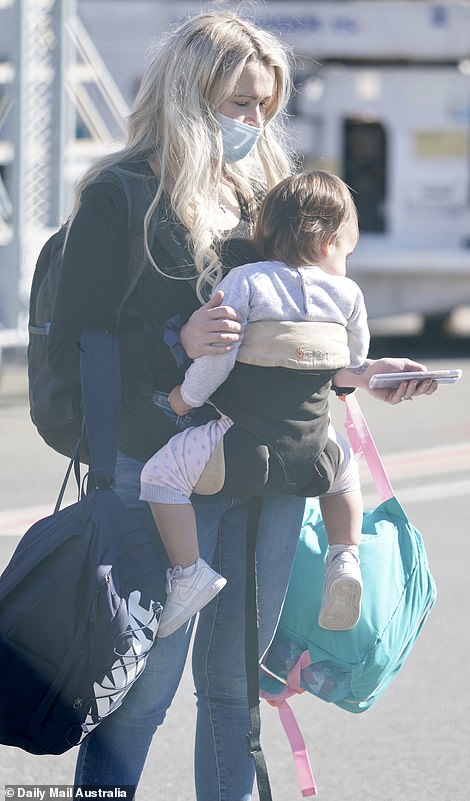 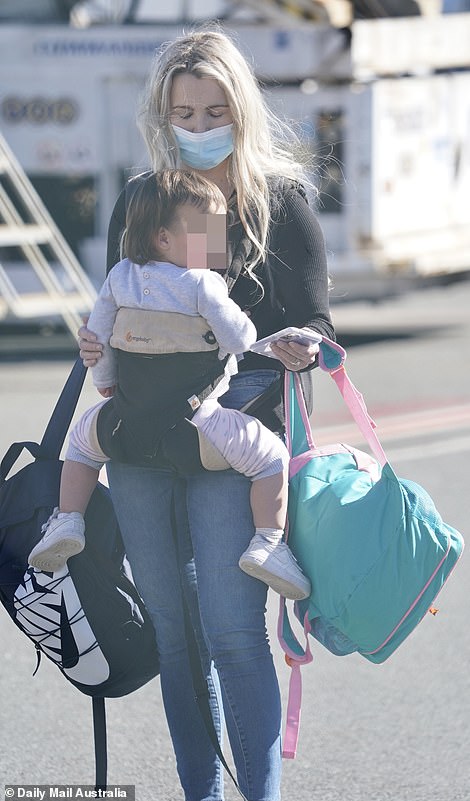 Amy was contacted in a series of messages by the woman, who apologised for her role in the alleged fling 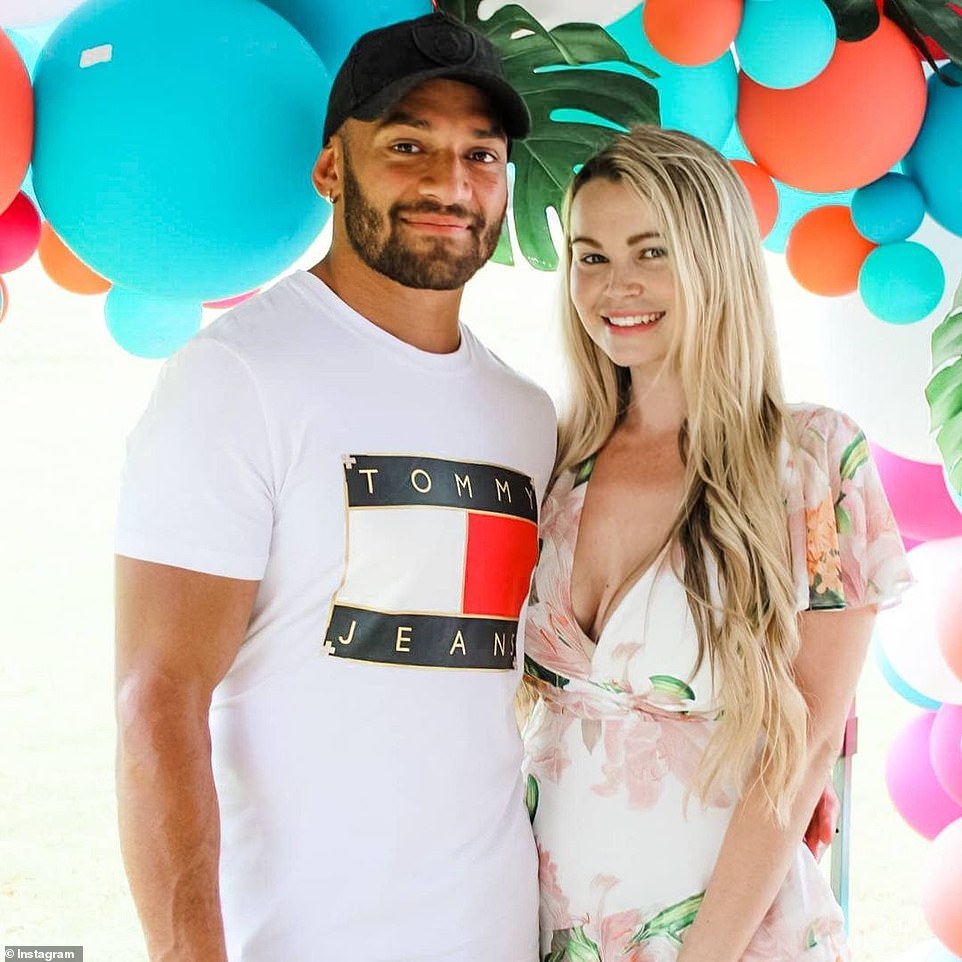 The mother-of-two said she sensed something was amiss after her husband returned from camp, and had no doubt the truth would have come out eventually

Koroisau was 18th man for games one and two, and allegedly invited the woman to join him at the Novotel in Homebush on June 20.

The NRL has gone to extreme lengths to keep the game alive since the pandemic began 18 months ago, including demanding all players enter a ‘bubble’ to avoid potential outbreaks.

V’landys warned upon moving the competition to Queensland that there would be a ‘zero tolerence’ policy moving forward.

‘The Queensland Premier (Annastacia Palaszczuk) has made it clear to us if anyone does the wrong thing or plays up, they will be removed from Queensland and I will support her on that.

‘I can’t stress enough the great courtesy we have been afforded by the Queensland government. We will not abuse that courtesy.’ 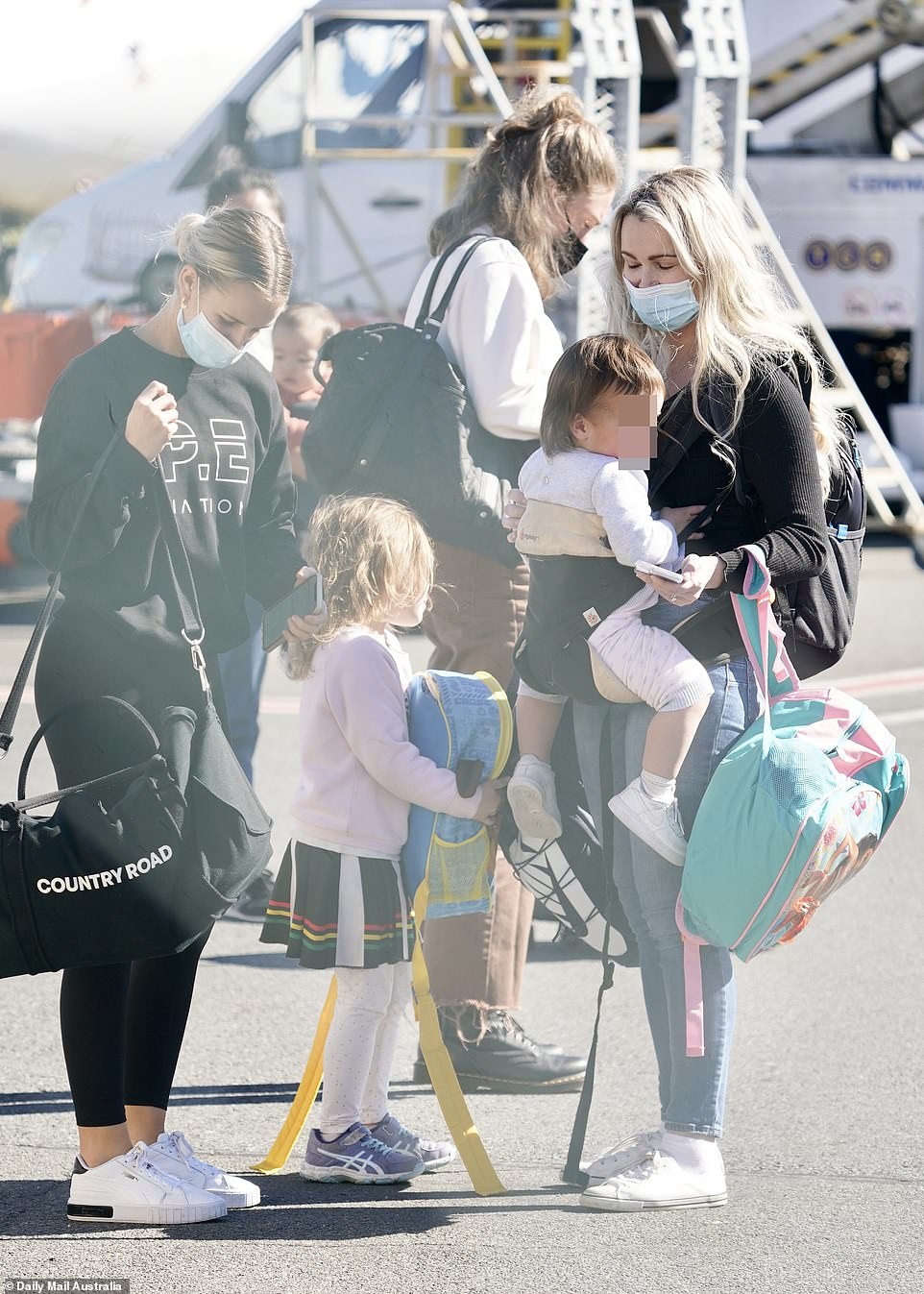 Miliana, who proudly represented her dad’s football team by wearing a Penrith Panthers skirt, helped out by carrying her own Paw Patrol backpack off the plane 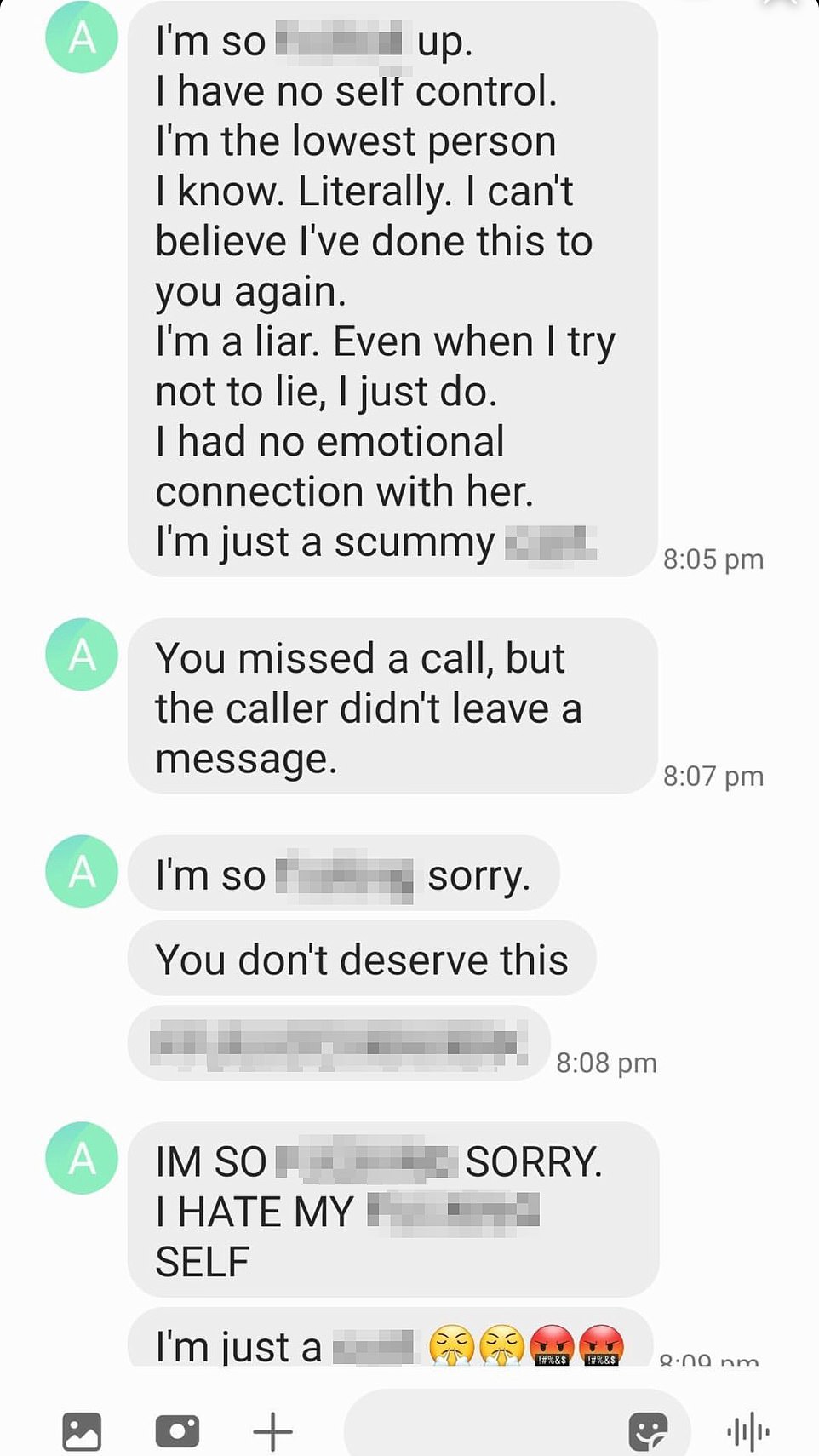 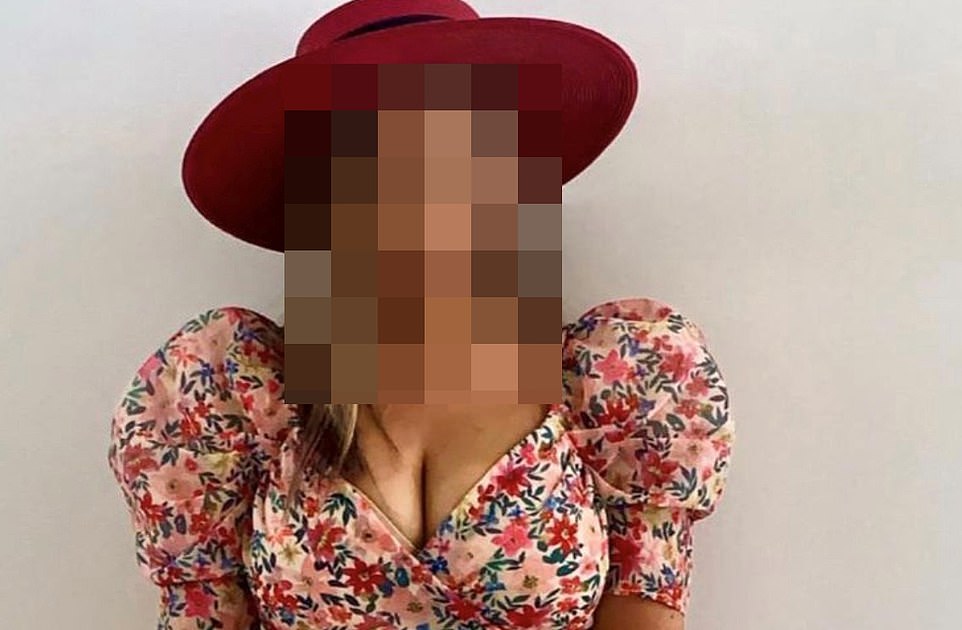 The woman, who asked not to be named, said she met Korosiau on Instagram in early June, and their communication quickly moved to Snapchat.

But Koroisau allegedly breached the rules by inviting the woman, who was holidaying in Sydney, into the Blues camp despite the Covid outbreak in the city.

‘I was told to message him when my Uber was about to drop me off and walk straight into the lifts, where he would be waiting for me,’ she said.

Koroisau was in the elevator when the woman arrived, and ushered her directly up to his room.

They allegedly spent about two hours together before Koroisau told her to leave because he had to return to his teammates – who were all together downstairs.

Less than 12 hours later, Koroisau and his Blues teammates flew to Kingscliff, where Queensland Premier Annastacia Palaszczuk granted them an exemption to ensure the State of Origin could go ahead despite increasing Covid cases across Sydney.

On June 27, the day of the second match, the woman said Koroisau invited her to join him at the Sofitel resort in Brisbane – but he warned her it would be ‘difficult’ given he now had a roommate.

She said he suggested she book her own room in the hotel – and even allegedly offered to pay for it. 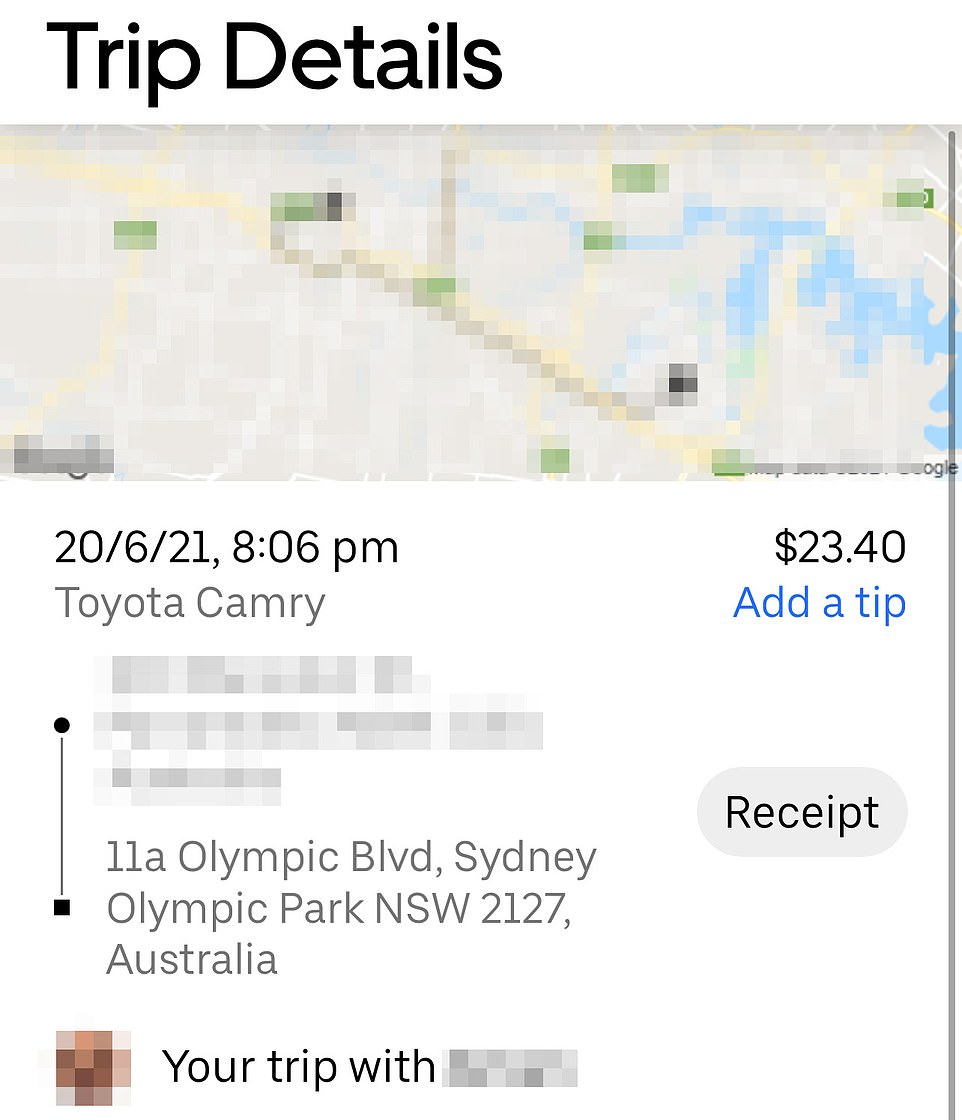 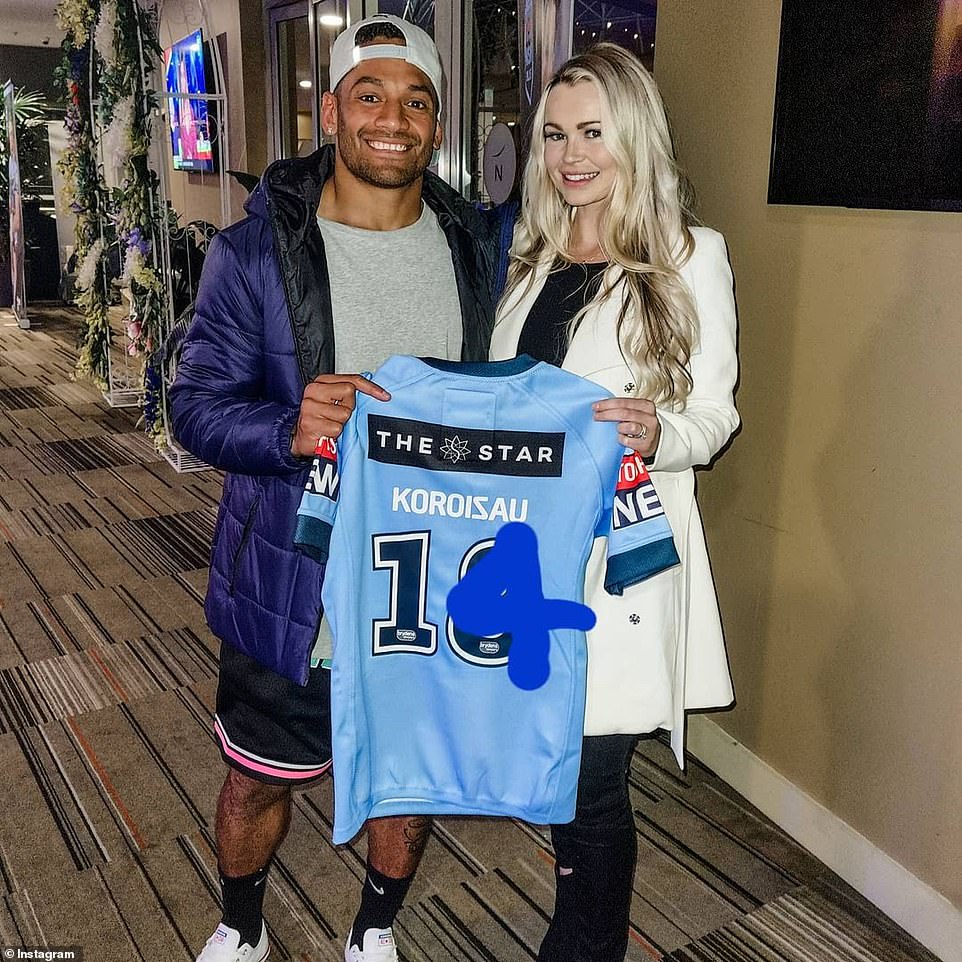 The woman said she booked a room in her own name and met Koroisau when she arrived. He then took a key to her room on his way out and returned to see her about midnight after his team sealed the State of Origin cup in a 26-0 thrashing of Queensland.

She claims Koroisau didn’t want his roommate to know he was breaching strict isolation rules implemented by camp officials, and that he left her room about 6am the next morning.

Receipts seen by Daily Mail Australia showed the woman checked into the room that she booked about midday on June 27.

‘My understanding is that nobody actually knew and that he kept it all hush hush because it was not allowed,’ she said.

The pair planned to meet again before game three, but the woman said Korosiau pulled the pin after word spread that Arrow had been booted out of camp.

‘We didn’t want to ruin his debut… so we decided it would be best that I didn’t come,’ she said. 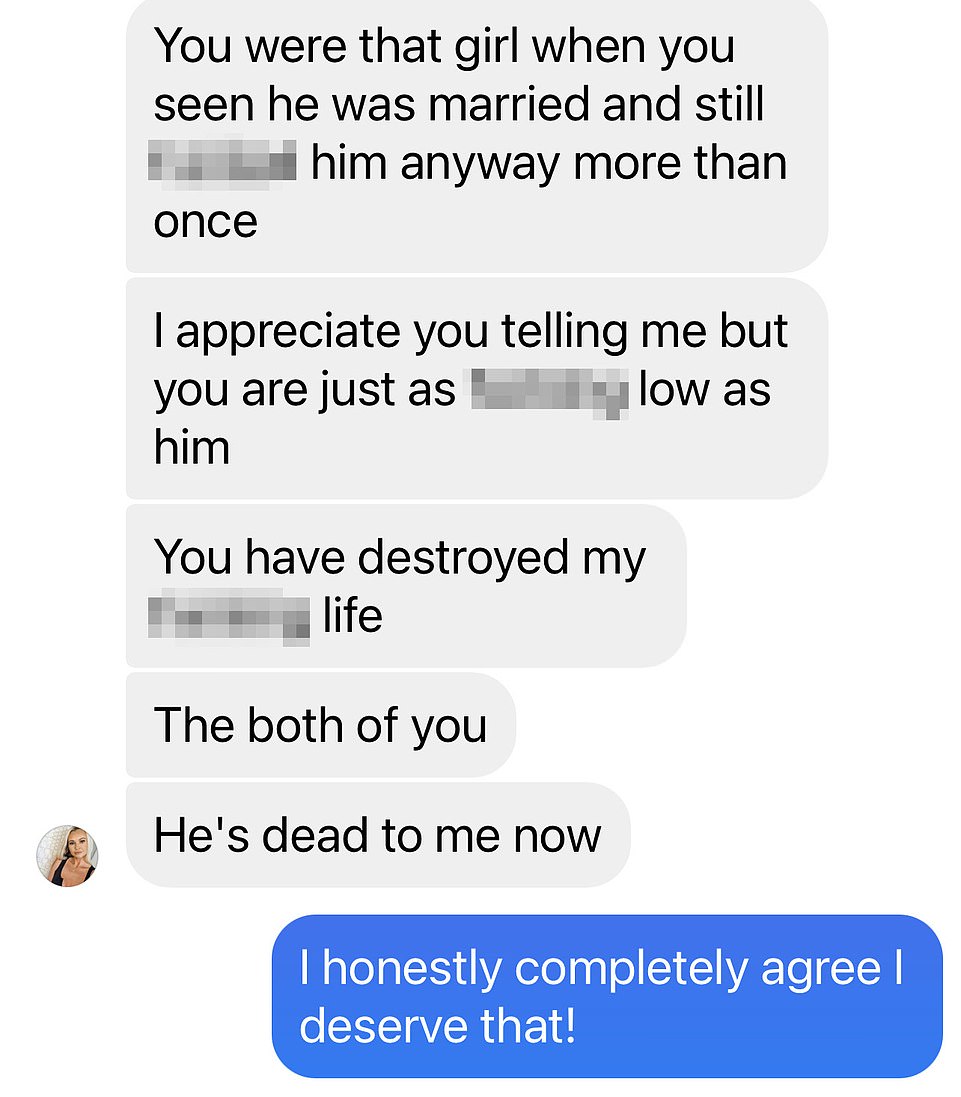 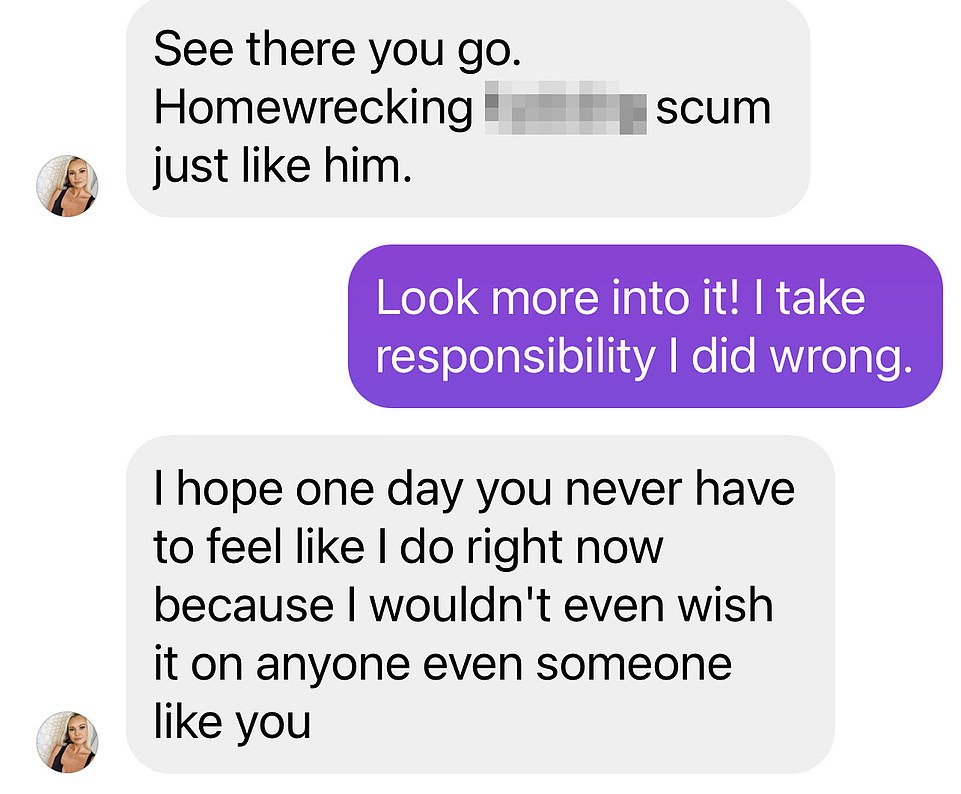 The woman claims the next morning, Koroisau told her he’d be ‘deleting his Snapchat’ because he was heading home to his wife, and urged her not to contact him on Instagram in case his wife read the message. Pictured: An exchange between Koroisau’s wife’s Instagram account and the other woman

The woman claims the next morning, Koroisau told her he’d be ‘deleting his Snapchat’ because he was heading home to his wife, and urged her not to contact him on Instagram in case his wife read the messages.

‘He didn’t want his wife to know he had Snapchat, so he said he’d contact me again in the next camp like 10 days away, he said not to send Instagram messages because his wife regularly checks it,’ she said.

Following the short-lived alleged affair, the other woman contacted Koroisau’s wife, Amy, to apologise for her part in what happened.

In a series of messages shown to Daily Mail Australia, Amy Koroisau told the other woman she was ‘devastated’ and considered leaving the marriage. 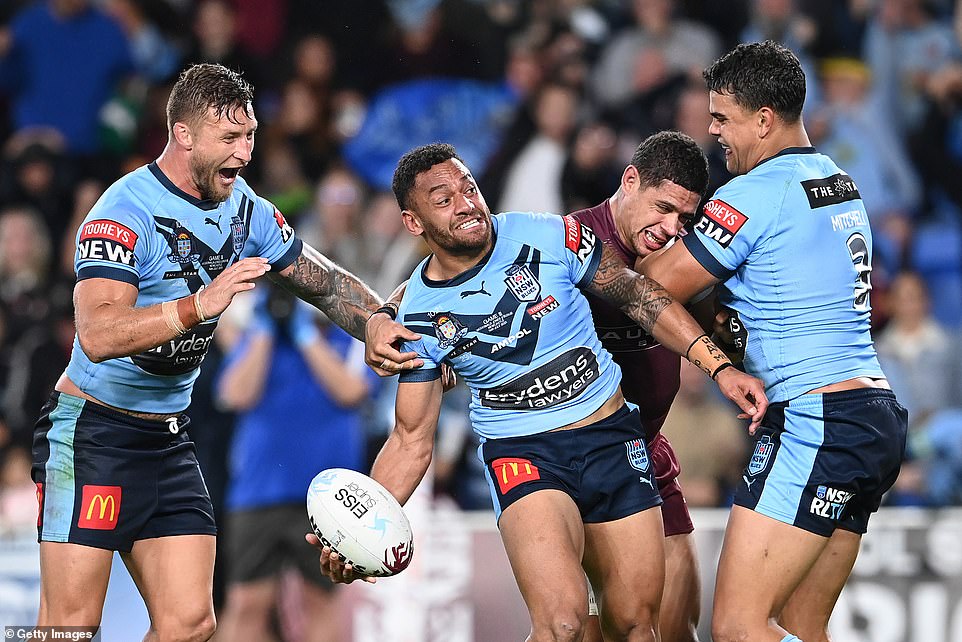 Koroisau had a stellar debut in game three, scoring a try, after being listed as 18th man for games one and two

‘I appreciate you telling me but you’re just as low as him… I hope you never have to feel how I feel right now. I wouldn’t wish this on anybody.’

Amy told the woman she felt like she was ‘dying’ after learning of the alleged affair, accusing her of being a homewrecker and ‘destroying our lives’.

The mother-of-two said she sensed something was amiss after her husband returned from camp, and had no doubt the truth would have come out eventually.

In the text exchange, Amy claims Koroisau admitted to the rendezvous’ but promised there was ‘no emotional connection,’ despite flirting with the woman over several days.

‘[He said] yeah there was flirting but he didn’t feel anything for you and apparently he said in Kingscliff that he felt guilty and couldn’t do it anymore,’ Amy wrote to the woman. 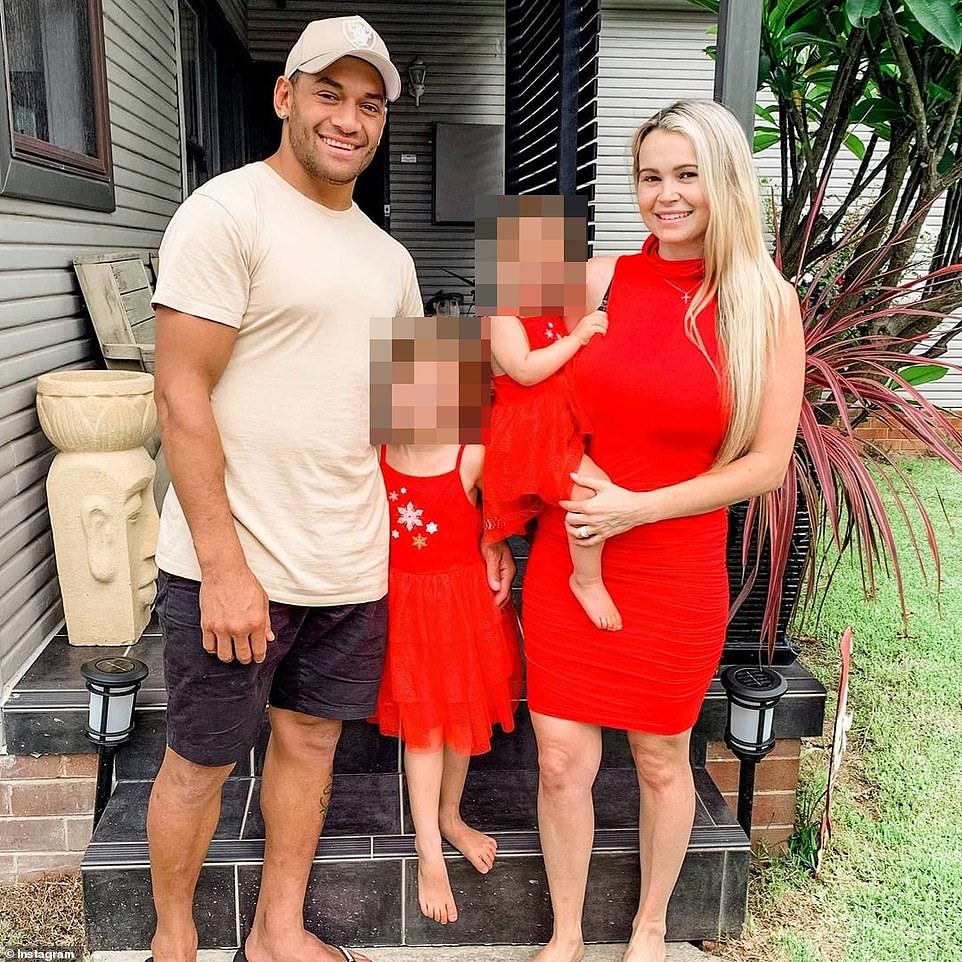 Koroisau’s wife of four years allegedly told the other woman that she would leave him after learning of the affair, but it appears she has since flown to the Sunshine Coast to join the Penrith Panthers’ Covid bubble with their two young daughters

June 20: Api Koroisau and the woman begin private messaging on Instagram, but Koroisau quickly directs the conversation to Snapchat

He allegedly tells the woman he is in Blues State of Origin camp in Homebush, and asks her if she’d be interested in ‘sneaking in’ to see him

June 21: Koroisau and his team fly to Kingscliff to escape Covid in Sydney

June 26: Koroisau allegedly contacts the woman again to ask if she’d like to see him again, this time in Brisbane

June 27: The woman checks in to her own hotel room in the Sofitel Brisbane, where the team is playing, after Koroisau allegedly tells her he has been assigned a roommate

That afternoon, Koroisau allegedly arrives at the woman’s room to ‘sleep together’ prior to the match

June 27 evening: Koroisau leaves the room, taking a key with him, to join his teammates and head to the game for an 8.10pm kickoff

June 27 midnight: He allegedly returns to the woman’s apartment about midnight, after his team won the match

June 28: Allegedly slips out of the hotel room about 6am to join his teammates

Koroisau reportedly says he will ‘be in touch’ again ahead of match three, when he is back in camp

July 8: Koroisau allegedly messages the woman again to organise to catch up back in camp ahead of game three

He allegedly tells her to ‘come over about 9pm, after dinner with the team’ but backtracks just hours before she’s due to arrive after Queensland Maroons star Jai Arrow is dismissed from his squad for breaching the Covid bubble

July 17: The woman informs Koroisau’s wife of the alleged affair