Police swooped on two men acting suspiciously in Westminster and took them into custody on suspicion of terror offences last night.

Armed cops arrested the men in Pall Mall at around 12.10am as they sat in a car.

The road in central London is not far from Buckingham Palace.

The suspects, both aged 34 and from East London, were arrested on suspicion of preparation of terrorist acts contrary to the Terrorism Act.

They are currently in custody with counter-terror cops investigating the incident, Scotland Yard confirmed.

Armed police arrested the pair who were seen to be acting suspiciously in a car in the Westminster area (Pictured: File image of armed police)

Commander Richard Smith, head of the Met Police Counter Terrorism Command, said: ‘Every day, police officers are on patrol across the Capital, watching for suspicious behaviour and stopping people they suspect may be involved in criminality.

‘The public can help us continue to keep London safe by being vigilant and reporting any suspicious behaviour to police.’

No firearms were discharged while arresting the two men, but police urged the public to remain vigilant.

It comes after a gunman in Vienna killed four people in a rampage overnight and a Tunisian-born knifeman stabbed two women and a man to death at the Notre-Dame de Nice cathedral in France.

Commander Smith added: ‘Following the increase to the UK threat level from terrorism last week – as a precautionary measure in response to recent events in France and Austria – I would like to emphasise that the public should be alert but not alarmed.’

A statement from the Met Police said: ‘At approximately 00.10hrs on Thursday, 12 November, two men seen by police officers to be acting suspiciously in a car in the Westminster area were stopped and arrested on Pall Mall by armed officers.

‘The police officers searched the men and the vehicle. 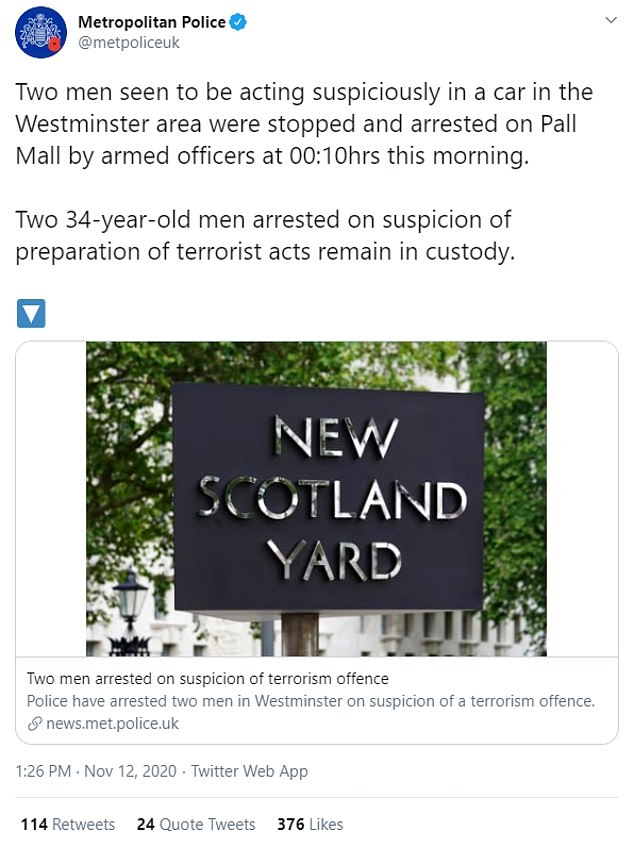 ‘They subsequently arrested the men – two 34-year-olds from east London – on suspicion of preparation of terrorist acts, contrary to section 5 of the Terrorism Act 2006.

‘Both were arrested under the Police and Criminal Evidence Act and taken into custody at central London police station, where they remain.’

In Austria’s deadly terror attack gunman Sebastian Kurz opened fire in six different locations across Vienna, killing four people and wounding as many as 22. He was armed with rifles.

The shootings took place near the capital’s central synagogue but it is not yet clear if that was the target as he opened fire on drinkers sitting outside in a busy area of the city.

And in the French capital a terrorist reportedly shouted ‘Allahu akbar’ (God is greatest in Arabic) before his stabbing rampage and was shot by police but did not die, so was arrested by officers.