Astronomers have captured the sharpest image yet of a ‘monster galaxy’ that gives birth to new stars 1,000 times faster than the Milky Way.

The team’s observations reveal this runaway star formation is the result of unstable clouds of molecules scattered through the galaxy, which is around 12.4 billion light years from Earth.

Monster galaxies are thought to be the ancestors of the huge elliptical galaxies like the Milky Way, and scientists hope that studying them will shed light on the formation and evolution of the small section of space we call home.

Pictured is an artist’s impression of the galaxy, known as COSMOS-AzTEC-1. Around its central black hole are two clouds of cosmic gas from which new stars form. Astronomers have captured the sharpest image yet of a ‘monster galaxy’ that gives birth to new stars 1,000 times faster than the Milky Way

Scientists at the University of Massachusetts Amherst and National Astronomical Observatory of Japan in Tokyo took observations using the £1.1 billion ($1.4 billion) ALMA Observatory in Chile.

The galaxy, known as COSMOS-AzTEC-1, had long been known to scientists, but the instruments at ALMA took readings with a resolution 10 times higher than any previous observations.

This revealed structural details within the galaxy that had never been seen before, answering a long-standing questions surrounding how monster galaxies form stars at such a rapid rate.

Also known as starburst galaxies, the ancient cosmic phenomena appeared shortly after the big bang, and give birth to new stars at a rate 1,000 times higher than our galaxy.

It is estimated the Milky Way forms enough star matter to make up three times the mass of the sun every year.

The stars formed can either be more or less massive than our sun, though less massive stars are more numerous.

For the new study, scientists studied the clouds of molecules within AzTEC-1 known as stellar nurseries – dense regions of gas that collapse to create new stars. 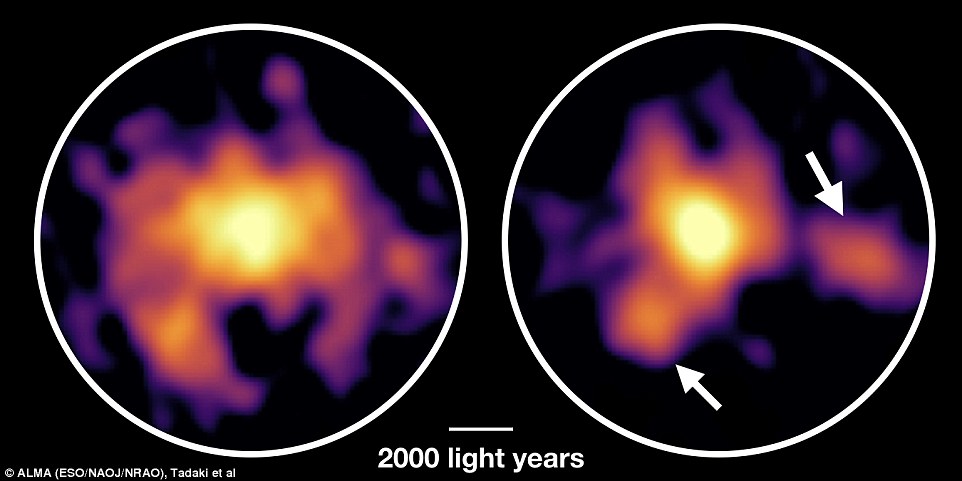 Pictured are the new observations, with star-forming clouds of gas highlighted by the white arrows in the right image. COSMOS-AzTEC-1, had long been known to scientists, but researchers have now taken readings with a resolution 10 times higher than any previous observations

WHAT IS A MONSTER GALAXY?

Monster galaxies, also known as starburst galaxies, are thought to be ancestors of massive galaxies like the Milky Way in today’s universe.

The ancient objects appeared shortly after the big bang and are characterised by rapid star formation and mass growth, birthing new stars at rates thousands of times above that of our own galaxy.

This leads to small but incredibly dense galaxies that quickly burn through all of their cosmic gas – the ‘fuel’ used to create new stars.

Once they use up this gas, some within around 100 million years of birth, they become quiescent or ‘red and dead’ galaxies – common in our universe today.

Scientists hope that studying the mysterious objects will provide answers to key questions about the formation and evolution of modern galaxies, such as the Milky Way.

Monster galaxies, also known as starburst galaxies, are thought to be ancestors of massive galaxies like the Milky Way in today’s universe. This image is an artist’s impression of ZF-COSMOS-20115, a monster galaxy discovered in 2017

The team utilised the high resolution and high sensitivity of ALMA to obtain a detailed map of the distribution and the motion of the gas.

‘We found that there are two distinct large clouds several thousand light-years away from the centre,’ said study co-author Ken-ichi Tadaki, of the National Astronomical Observatory.

‘In most distant starburst galaxies, stars are actively formed in the centre. So it is surprising to find off-centre clouds.’

The astronomers discovered clouds throughout the galaxy are very unstable, which is unusual. 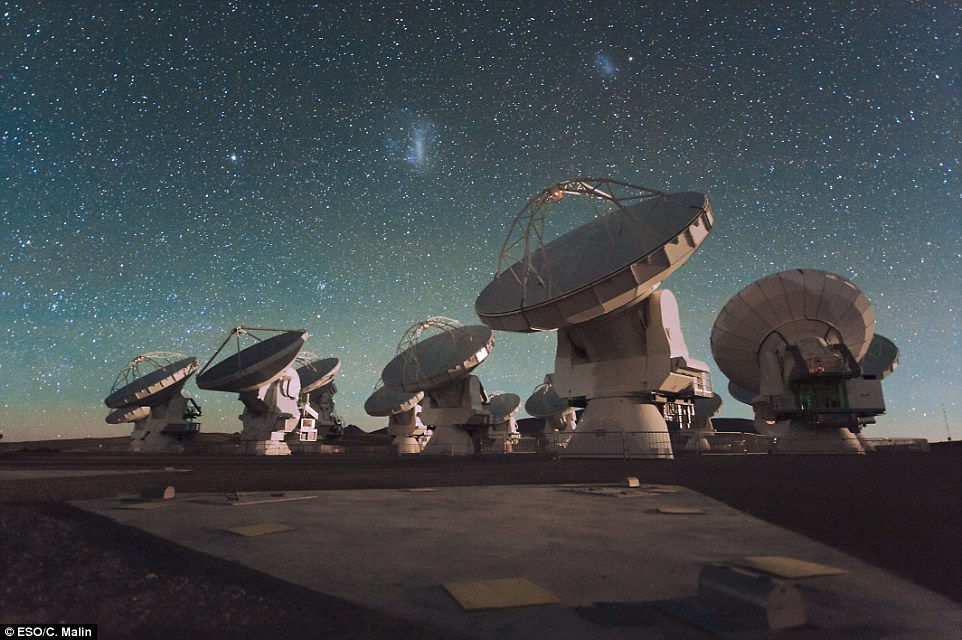 In a normal galaxy, the gravity pushing inwards and pressure pushing outwards are balanced in the gas clouds – when gravity overcomes this pressure, the cloud collapses and forms stars at a rapid pace.

Stars and supernova explosions at the end of the stellar life cycle then blast out gases, which increase the outward pressure – redressing the balance and ensuring stars form at a moderate pace.

In AzTEC-1, the pressure is far weaker than the gravity and hard to balance, leading to runaway star formation and an unstoppable monster galaxy.

The team estimated that AzTEC-1 will consume all of its own gas in around 100 million years, which is 10 times faster than in other star forming galaxies.

HOW OLD IS THE OLDEST STAR IN THE MILKY WAY? 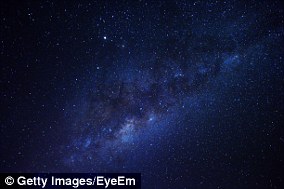 They added they were still unsure what is destabilising the galaxy’s gas, but believe it may be the result of a collision with another galaxy, known as a merger.

This could have transported the gas into a small area and ignited the process of intense star formation.

‘At this moment, we have no evidence of merger in this galaxy,’ Mr Tadaki said.

‘By observing other similar galaxies with ALMA, we want to unveil the relation between galaxy mergers and monster galaxies.’