A state politician has been accused of using this toddler for political point-scoring on social media.

Matt Bach, Victoria’s Shadow Minister for Early Childhood, posted a photo to social media that his wife Amy took of his three-year-old daughter, Phoebe, apparently staring forlornly at a closed playground on Wednesday.

Victoria is again locked down until September 2, with some of the toughest Covid restrictions in the world – which include the controversial and unpopular closure of playgrounds.

Playgrounds, basketball courts, skate parks and exercise equipment will be closed, residents will no longer be able to remove their masks in order to drink outside, schools will be shut, constructions sites will be forced to cut down on workers and all in-person gatherings will be banned.

Matt Bach, Victoria’s Shadow Minister for Early Childhood, was slammed on social media after posted a photo of his three-year-old daughter, Phoebe, apparently staring forlornly at a closed playground

Mr Bach posted another photo, of he and wife Amy, while their daughter Phoebe played on a wing just over his wife’s shoulder. The post said all three were about to receive another ‘unwarranted hit’ to their wellbeing with the closure of the park

‘Amy took Phoebe to central gardens today – after she’d spent the whole day inside – for a run around on the grass,’ Mr Bach wrote on Facebook.

‘She sent me this photo about how she’d reacted to the closure of the Rocket Park.’

But on Twitter he was slammed by hundreds of users, many who doubted the authenticity of the photo.

‘What a cheap way to try to score some political points,’ one man wrote.

‘Did you take your child to rocket park in full knowledge that playgrounds are currently shut, for a photo opportunity?’ another user tweeted. 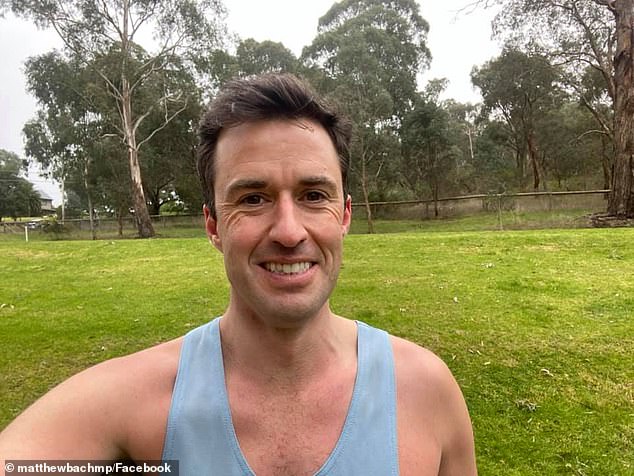 One woman suggested Mr Bach try to ‘get creative’ with entertaining his child.

‘Imagine exploiting the emotions of a small child so you can create a politicised photo op rather than taking a ball or a frisbee to play with together.

The timing of the photo appeared to support his campaign against a controversial aspect of the latest draconian Melbourne lockdown.

On Wednesday he published an emotional news column, in which he claimed the Andrews government had ‘broken’ his toddler.

‘Then they took away baby-chinos at the cafe round the corner.’

He tweeted a photo of the column with a comment claiming the closure of playgrounds was ‘cruel’ and ‘based on no evidence whatsoever’.

But several people responded to Mr Bach on Twitter pointing out that children have gotten ill with the Delta variant – and that the point was to stop the parents mingling.

‘The parks were full of parents hanging out, masks down, drinking coffee, talking in close proximity. That’s how it spreads. Many parents messed this up for the kids, blame them. (And I’m a parent of young kids),’ one Twitter user replied.

On Monday, Mr Bach posted another photo, of he and Amy, while Phoebe played on a wing just over his wife’s shoulder.

‘One last play for Phoebe before playgrounds are closed – again,’ he wrote.

‘Amy and I are feeling for our girl, and all kids across Melbourne, as they are about to receive this further – utterly unwarranted – hit to their wellbeing.’

One man wrote: ‘Andrews is a vindictive narcissist. I don’t recall playgrounds being super spreaders . This labour government is playing with our children’s minds and well being.’

Daily Mail Australia approached Mr Bach for comment but was told he was unavailable.