Residents of a small British village were stunned when they spotted a kookaburra bird – 10,000 miles away from its native Australian home.

When he heard the description he thought the bird could be a kookaburra, but dismissed the idea as a prank.

But then he got a call from a neighbour in Membury, Devon, saying it was in their garden so he went to take a look – and it was one.

The kookaburra, usually native to Australia, seen in the village of Membury, Devon this week

Daniel, 61, said: ‘It was in a neighbour’s garden, I had an email first thing in the morning from someone saying they had seen it.

‘I thought it was a wind up then I had a call from someone just up the road saying they had seen a kookaburra – they had some experience with birds so knew what it was.

‘I recognised it from the description in the email, but the person who called me didn’t believe that they had got the breed right.’

Observing social distancing measures, Daniel went round to investigate and to try and identify the bird. 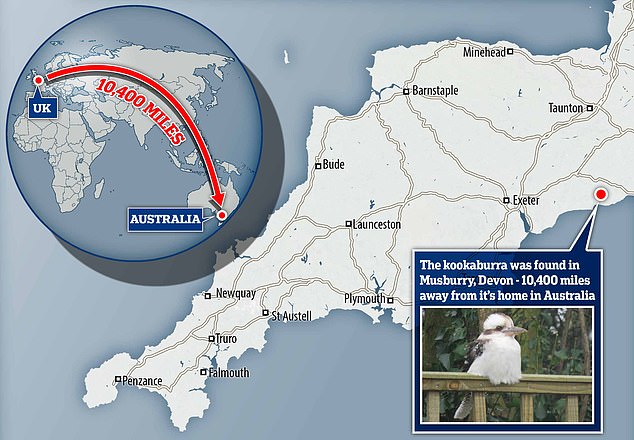 Kookaburras are tree kingfishers and are native to Australia and New Guinea. This map shows how far the bird was from home

He added: ‘I went to go look and it was a kookaburra, it was just sat on their fence quite comfortably and I was able to get a picture of it.

Merry, merry king of the bush is he

Gay your life must be

Eating all the gum drops he can see

Leave some there for me

Counting all the monkeys he can see

That’s not a monkey that’s me

Kookaburra sits on a rusty nail

Gets a boo-boo in his tail

Oh how life can be

‘I was certain it was a kookaburra, I don’t have experience seeing them in the wild but it couldn’t be anything else.

‘After a few minutes it flew off and landed in a tree, then it lifted its head back and out came the kookaburra song. That confirmed it for me.’

Daniel thinks the most likely explanation is that the bird escaped from the nearby Axe Valley Wildlife Park which is currently closed due to the coronavirus pandemic.

He added: ‘Lots of people had seen it in the area, it’s a very quiet little village and when something makes such a unique noise it’s picked up by lots of people.

‘This one is from a little wildlife park up the road I expect, they’re closed obviously but I gave them a ring yesterday – no one has called me back yet.

‘I imagine it escaped somehow.’

Kookaburras are tree kingfishers and are native to Australia and New Guinea.

They have a distinctive birdsong, and the loud distinctive call of the laughing kookaburra is widely used as a stock sound effect in Australian movies.