Australian mum turns $4.80 Woolworths mudcakes into an epic birthday cake for her daughter

A thrifty mum has transformed the humble supermarket mudcakes into a spectacular dessert for her daughter’s first birthday.

The woman, from Perth, turned three premade Woolworths mudcakes with white chocolate ganache, which cost $4.80 each, into an epic drip cake – complete with strawberry frosting, mini meringues and unicorn sprinkles.

Birthday cakes can cost anywhere between $80 to $300 in Australia – depending on the size and decorations you choose.

To make the cake, she used a $3 packet of CSR buttercream icing mix, a $4 tub of Betty Crocker strawberry frosting, $4 mini meringues and $4 unicorn sprinkles.

‘Delighted with how it turned out,’ she wrote in a Facebook group.

What you’ll need to make a drip cake

Before assembling the cake, she wrapped the premade mudcakes individually in foil before placing them in the freezer for 24 hours.

By doing the freezing method, the cakes won’t be as crumbly, making it easier to cut through the sponge.

‘I kept the icing on top [of the premade cake] when freezing. I cut them off when I was icing the cake. I find it easier to remove the icing when it’s semi frozen,’ she said.

To assemble the cakes, she piped the buttercream icing in between the layers and on the outside of the cake, spreading evenly around. 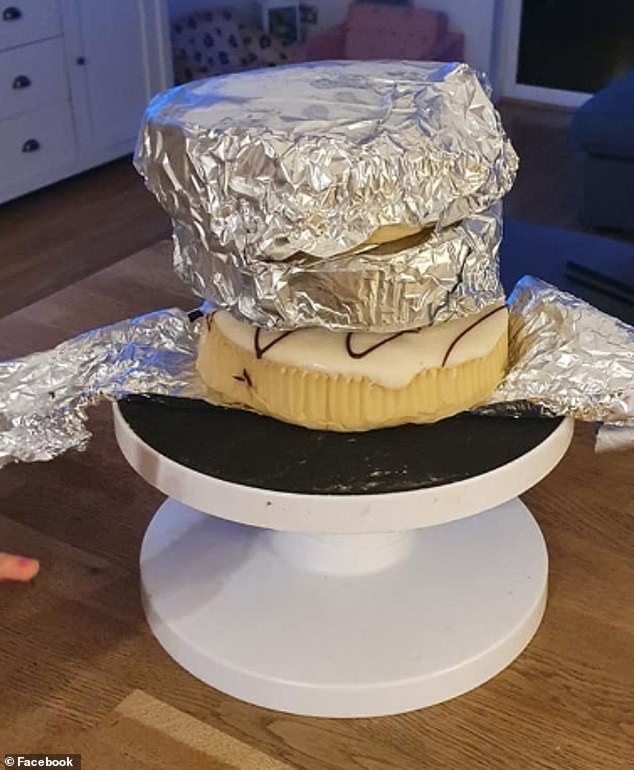 The woman, from Perth, turned three premade Woolworths mudcakes with white chocolate ganache, which cost $4.80 each, into an epic drip cake

Once the buttercream sets firm, she heat up the strawberry frosting in the microwave for 20 seconds to create a smooth glaze.

She then poured the pink frosting over the cake, allowing it to dribble over the side to create the ‘drip’ effect.

To decorate the cake, she placed mini meringues around the top of the cake, and added rainbow sprinkles along the bottom half of the dessert.

Hundreds were amazed with her ‘beautiful’ creation, with many saying they couldn’t wait to make their own cakes for their kids’ birthday parties.