A woman who suffers from ‘painful fat syndrome’ has spoken about what it’s like to live with a chronic health problem that can’t be controlled or prevented by diet or exercise.

Jen Matsas, an HR specialist from Sydney, is 31 years old and was diagnosed with lipoedema last year – a little known condition affecting around one in nine women.

Lipoedema is characterised by an abnormal and often extremely painful build-up of fatty tissue on the body – most typically seen on the hips, thighs, bottom and lower legs.

‘[As a teenager] I knew my legs were different; not the ‘normal’ shape,’ she told FEMAIL.

‘My waist was always so much smaller than my hips and the fat on my hips was so much more rounded and pronounced in comparison.’

Jen first began noticing the symptoms of lipoedema when she was 14 years old.

The condition often worsens for women during high hormonal events – the main three being puberty, pregnancy and menopause.

As a younger woman, she said getting to grips with how her body was changing, despite the fact she danced and watched what she ate, was a struggle and a times ‘so isolating’.

When she’d wear a leotard to rehearsal, she’d have what she described as ‘saddlebags’ hanging out the sides, and finding a school uniform meant buying a size 16 to 18 skirt and a 10 to 12 top.

Shopping for special events was also challenging, as it was virtually impossible for her to find anything that fitted. 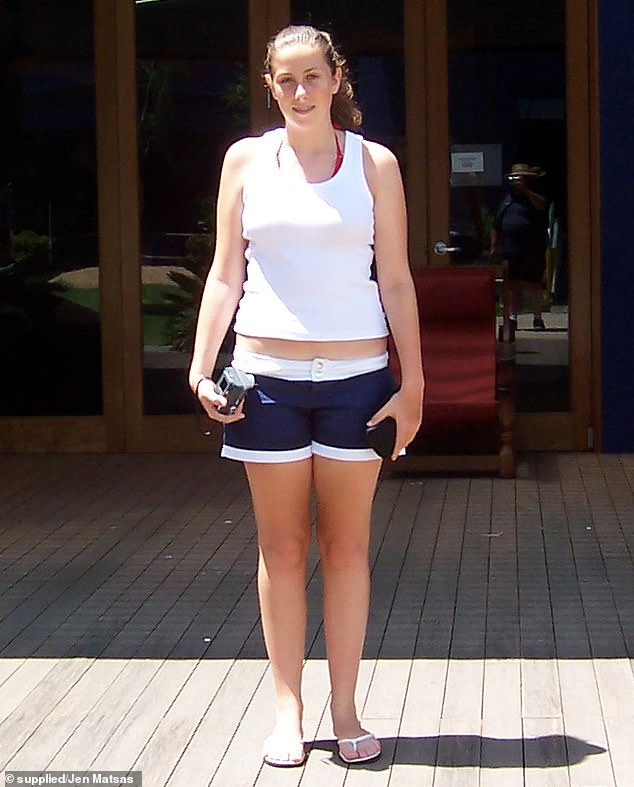 What is lipoedema and who does it affect?

* Lipoedema is a chronic and incurable condition involving an abnormal build-up of adipose tissue.

* It typically affects the thighs, buttocks and lower legs, and sometimes the arms, and may, although not always, cause considerable tissue enlargement, swelling and pain.

* It may significantly impair mobility, the ability to perform activities of daily living, and wellbeing.

* Lipoedema mostly affects women. Figures show 11 per cent of women in Australia are affected with the condition. It is rare in men.

On top of this, not having any kind of diagnosis meant she was left bewildered as to why she couldn’t shift the extra weight despite exercise and dieting.

While Jen began experiencing the symptoms of lipoedema during puberty, the condition became far worse after she started taking the pill in her twenties.

At 24, she started on the contraceptive pill and within two months had gained 15 kilograms.

‘I didn’t notice a real increase in the size of my legs until I went on the pill,’ she said.

‘I only stuck that one out for four months before switching until I found one that suited my body. Unfortunately, I didn’t lose the weight after changing pills.’ 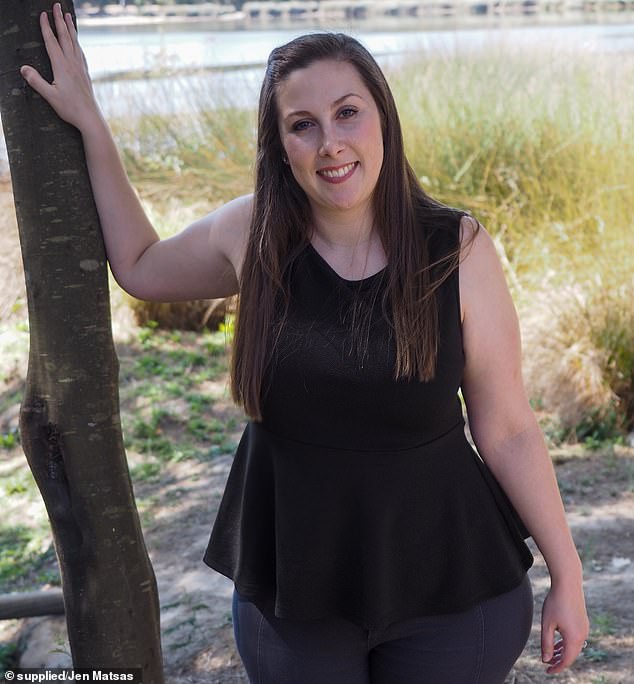 Lipoedema is characterised by an abnormal build-up of fatty tissue on the body – most typically seen on the hips, thighs, bottom and lower legs 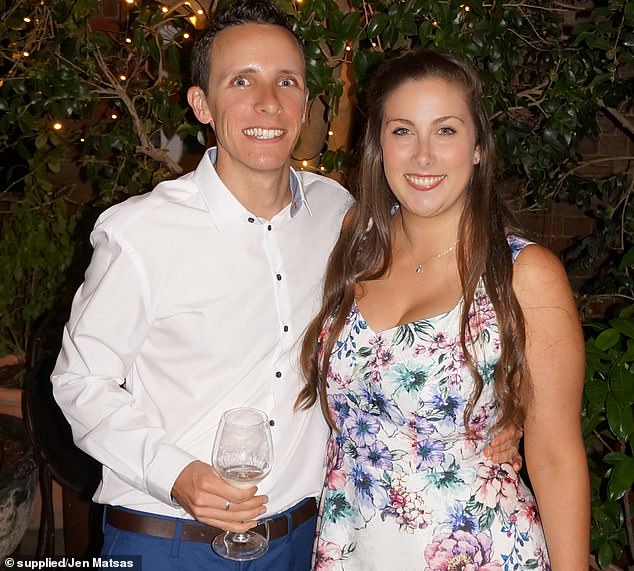 Jen (pictured with her fiance, left) said her condition became far worse after she started taking the contraceptive pill

Around this time she also started experiencing ‘flesh’ pain in her thigh – sensations she described as tender and uncomfortable.

‘The pain was difficult to describe but not something I’d noticed before. It did get worse over roughly six months,’ she said.

While thigh pain came and went over the intervening years, other painful symptoms started to emerge.

‘For example, my right ankle would swell for no reason at all, although it was worse in the heat,’ she said.

‘It would ache and [placing] ice on it didn’t do much to reduce the swelling.

On top of this Jen said her arms and legs were covered with bruises that were ‘totally unexplained’.

‘I’ve come to learn all of these are symptoms of lipoedema,’ she said.

As well as finding herself in pain, Jen also noticed the extra fat on her body was feeling ‘different’.

In its initial stages, the fat deposits felt more like cellulite, however, over time this had started feeling like ‘little peas under the skin’. 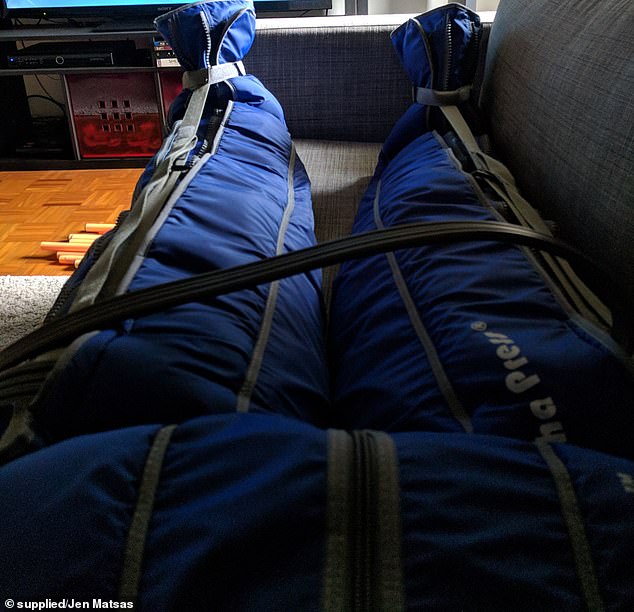 * Legs appear symmetrically swollen – swelling can occur from the hips down to the ankles and your legs appear column-like; the feet are not usually affected.

* Affected areas feel ‘spongy’ and cool and the skin is generally soft and subtle.

* Bruising easily in the affected areas.

* Small varicose or spider veins in the affected areas.

* Legs and other affected areas are sensitive to touch.

* Legs and other affected areas hurt and feel uncomfortable.

Although Jen had lived with the lipoedema for more than a decade, she hadn’t been formally diagnosed.

Extensive research gave her enough information to visit her GP early last year who confirmed she suffered from the condition.

Lipoedema isn’t medically recognised in Australia – despite the fact the World Health Organisation has classified it as a disease.

While a cure isn’t available, Jen believes focusing on her health is the most important thing she can do to manage her condition.

‘I do a mixture of things including maintaining an anti-inflammatory diet which means reducing all processed foods.’ 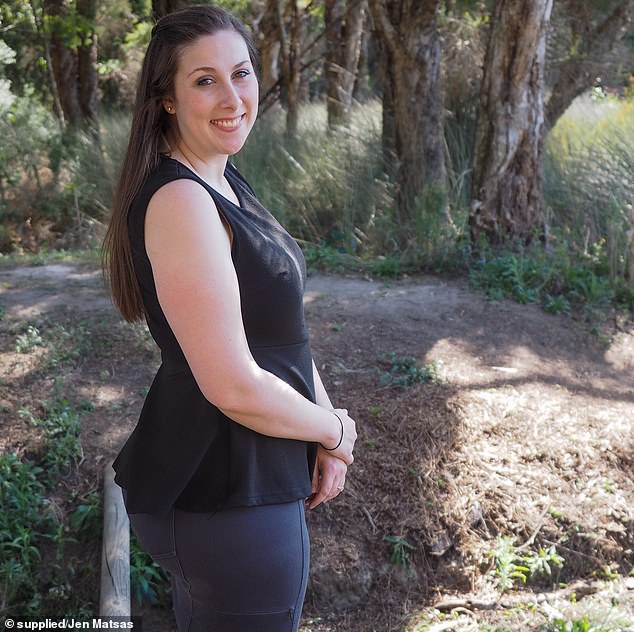 She also uses a sequential compression suit (a device which helps improve blood flow in the legs) and a vibrational platform.

Jen doesn’t take medication as she remains unconvinced there has been enough published research on the causes of the condition.

Therapy in the form of manual lymphatic drainage (MPD) is also part of her regime. The massage is thought to encourage the natural drainage of the lymph.

Liposuction is a longer-term treatment option, although not a cure. Surgery costs around $20,000 and is not supported by Medicare. 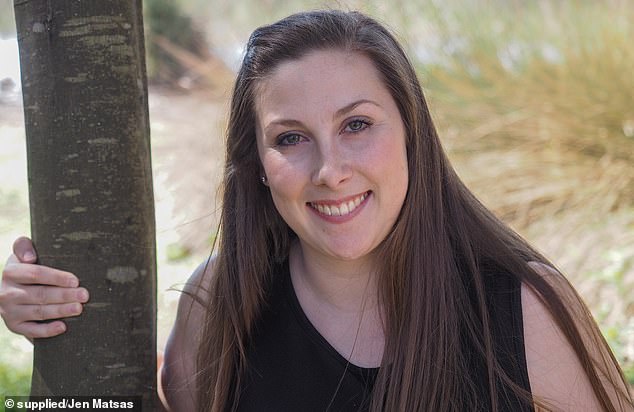 ‘Some days are rough and there are moments of “why me” but most of the time I just have to get on with things because there’s no much point in dwelling,’ Jen said

Jen, who is now a member of the Lipoedema Australia board, does all she can to remain positive about her situation – and support others through education.

‘It is difficult [because] your family and friends don’t understand completely what you go through on a daily basis,’ she said.

‘Some days are rough and there are moments of “why me” but most of the time I just have to get on with things because there’s no much point in dwelling.’

Her advice to anyone who suspects they may have this condition is to be prepared to seek out a diagnosis – at all costs.

‘Do what I did and take a brochure to your GP, and tell them you think you have this condition,’ she said.

‘If they aren’t receptive to the message, it is potentially time to move on.’