Barnaby Joyce has slammed Annastacia Palaszczuk’s hard border closure, saying she is on the ‘wrong side of history’.

The Queensland Premier on Wednesday blocked people from Victoria, NSW and the ACT relocating to the Sunshine State for two weeks because Brisbane’s quarantine hotels are full and she refuses to allow home quarantine.

Barnaby Joyce (pictured) has slammed Annastacia Palaszczuk’s hard border closure, saying she is on the ‘wrong side of history’

‘We had the idiot position at one stage… where a person’s front gate was in Queensland, the house was in NSW and they had to get a permit to drive out or drive in,’ he told Sky News Australia on Thursday.

‘This is the sort of lunacy that’s happening,’ he said.

The Deputy Prime Minster said the premier was ‘not reading the tea leaves’ in terms of how Australians feel about Covid-19 restrictions.

‘People have moved on… what people were highly supportive of and right behind maybe some months ago, now they just want their lives back,’ he said.

‘The only job you have now is to work to a process of giving Australia back the liberties and freedoms that all the people who voted for you were born with.’ 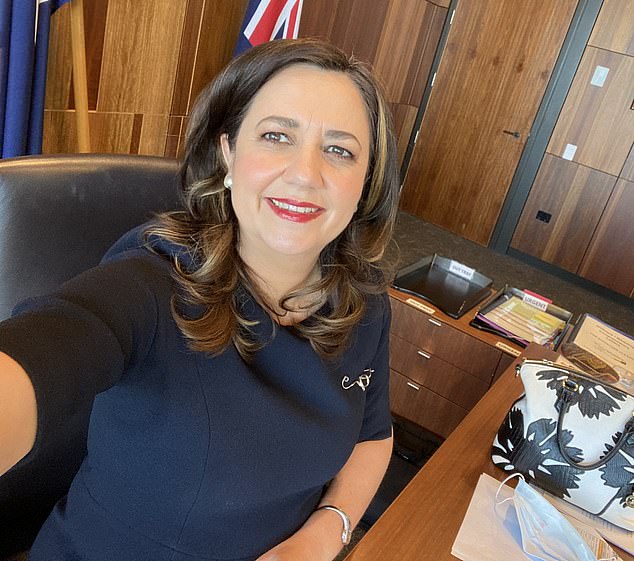 It comes after Ms Palaszczuk announced she would move ahead with her state’s own quarantine facility at Toowoomba, being built by the Wagner Group, without federal support.

Construction is already underway with 500 beds to be operating by the end of the year with another 500 to come online by the first quarter of 2022.

‘This is going to be a great boost for our defence against the Delta virus in this country and, in fact, I believe we need regional facilities right across the country,’ Ms Palaszczuk told reporters.

The facility will have single, double and family rooms in cabin-style accommodation without any adjoining hallways.

The state will lease it from the Wagners for one year, initially, with guests to be bussed there from Brisbane and the Gold Coast.

Any virus patients will be treated at the state’s five existing COVID-19 hospitals.

Mr Miles said the facility is the first step towards replacing hotel quarantine, which is inadequate against Delta.

‘We can ensure that it replaces current hotel quarantine usage,’ Mr Miles said.

‘Well I think he does now,’ Ms Palaszczuk said.

Mr Morrison said the federal government wouldn’t support the state’s project, but it would not stand it the way either.

‘To have people quarantine there rather than in hotels, that is entirely a matter for the Queensland government,’ he told reporters.

‘And they have made that decision, and they could have done that months ago, if that’s what they wished to do.’

Ms Palaszczuk on Wednesday said there were more than 5114 people in hotel quarantine, including 3257 domestic arrivals, which was putting too much strain on the system’s 22 hotels.

Hotel quarantine has been paused for NSW, Victorian and ACT travellers for two weeks until new system, which will allocate specific rooms for travellers, is set up.

Queensland police said people can still apply for an exemption to enter the state if they have a compelling reason, over the next fortnight.

At present, only certain essential workers who have had at least one vaccine dose are allowed to drive into Queensland.

The state recorded no new local cases of COVID-19 and two cases in hotel quarantine on Thursday.