BBC News at Six presenter George Alagiah, with his wife Frances, has revealed he has less than 10% chance of surviving the next five years after his bowel cancer returned

BBC News at Six presenter George Alagiah believes his chances of beating cancer would have been different, if routine screening in England had been made available at an earlier age.

The popular 62-year-old broadcaster, who has stage 4 bowel cancer, revealed he has less than a 10 per cent chance of surviving the next five years.

By contrast, patients diagnosed with stage 1 bowel cancer have an almost 100 per cent chance of surviving the same time frame.

Alagiah, who was diagnosed aged 58, believes had he lived in Scotland – where routine testing is offered every two years from the age of 50 – his prognosis would have been much better.

In England, bowel cancer screening is offered from the age of 60.

He has now thrown his support behind a campaign by Bowel Cancer UK and Beating Bowel Cancer to make the test more widely available to everyone aged over 50 in England.

Speaking to The Sunday Times, Alagiah said: ‘Had they had screening at 50, like they do in Scotland…I would have been screened at east three times and possibly four by the time I was 58 and this [cancer] would have been caught at the stage of a little polyp: snip, snip…’

The father-of-two, who has been the face of the BBC’s News At Six since 2007, was told his cancer had returned in January.

He continues to present the programme despite the recurrence.

The Sri Lanka-born presenter was previously diagnosed with the disease, which had spread to his liver and lymph nodes, in April 2014. 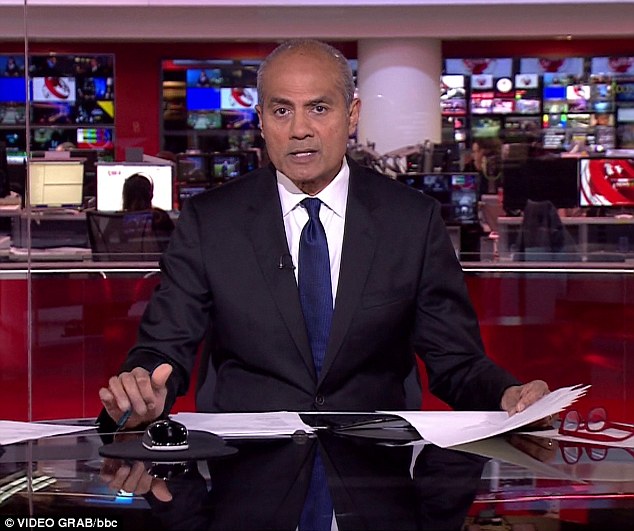 The 62-year-old broadcaster is calling for cancer screening in England to be made available to everyone from the age of 50, rather than 60, in line with the policy in Scotland

He had noticed blood in his stools and, after a colonoscopy, a tumour was discovered on his bowel.

Bowel cancer is also called colorectal cancer. It affects the large bowel, which is made up of the colon and rectum.

Most bowel cancers develop from pre-cancerous growths, called polyps. But not all polyps develop into cancer.

If your doctor finds any polyps, he or she can remove them to prevent them becoming cancerous.

Cancer cells may stay in the bowel or they might spread to other parts of the body, like the liver or lungs.

Bowel cancer is the fourth most common cancer in the UK, after breast, prostate and lung cancers.

Over 41,200 people are diagnosed with bowel cancer every year in the UK. Nine in ten cases are over the age of 50.

Bowel cancer is treatable and curable, especially if it’s diagnosed early. There is only a small chance that bowel cancer will come back after five years.

Almost 16,000 people die from bowel cancer in the UK every year. It is the second most common cause of cancer death in the UK, behind lung cancer.

In 2016, Alagiah said he was a ‘richer person’ for the experience, which saw him undergo 17 rounds of chemotherapy and five major operations, one of which included the removal of most of his liver.

Of his outlook for the future,  Alagiah said he was determined to remain positive, but admitted to having ‘wobbly moments’, when he imagined his family ‘unit’ without him.

‘I will not pretend it has been easy and we have had what we call our ‘wobbly moments’ and there have been a few of those and they hijack you at all sorts of times.

‘We love each other and I could break up that unit not through any fault of my own, and that is tough.’

At the time of his diagnosis in January, the newsreader said the return of his cancer had been ‘harder for his family.’

He said: ‘My brilliant doctors are determined to get me back to a disease-free state and I know they have the skill to do just that.

‘I learned last time around how important the support of family and friends is and I am blessed in that department.

‘I genuinely feel positive as I prepare for this new challenge.’

Taking to Twitter, he added: ‘Always knew cancer could come back but still tough dealing with disappointment.

Alagiah, who previously worked as a foreign correspondent, covering civil wars in Somalia and Liberia as well as the Rwandan genocide in 1994, was made an OBE in the 2008 New Year’s Honours. 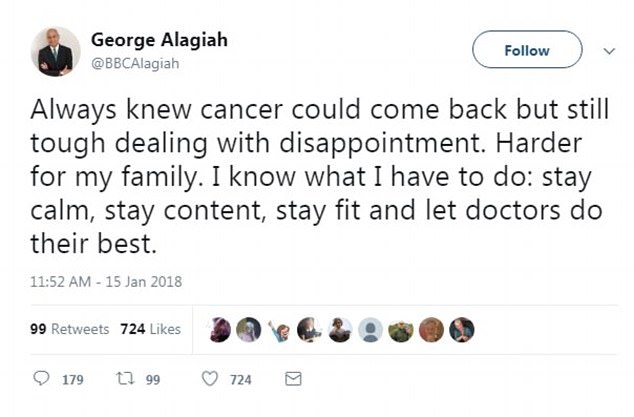 He has been married to Frances Robathan, who works for the Fairtrade Foundations, for 33 years.

They met while at Durham University and have two adult children Adam, 30, and Matt, 26. 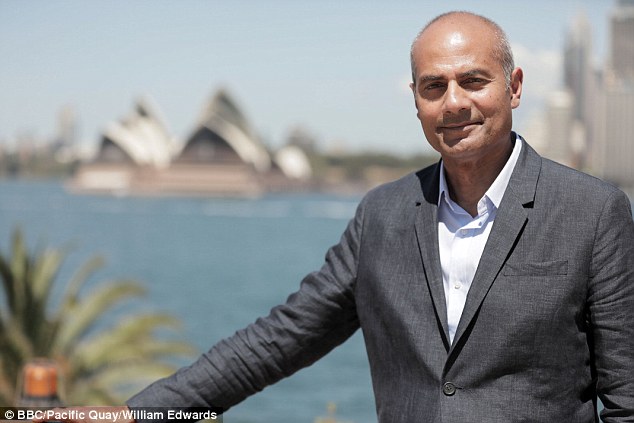 Alagiah, who was first diagnosed in 2014, has revealed that he has stage 4 bowel cancer