BBC rugby reporter Sonja McLaughlan has said that social media abuse won’t ‘change’ her ‘hardwired’ interview style – and added she believes she wouldn’t have been criticised as severely if she was a man.

McLaughlan interviewed Farrell in the aftermath of England’s shock 40-24 defeat against Wales in February during which she questioned him about some of the refereeing decisions that had angered the squad.

But she later took to Twitter to reveal she had been tagged in abusive messages on social media for reportedly grilling the captain.

‘I don’t know if people have got so used to bland post-match interviews that when somebody does suddenly do their job they’re a bit shocked,’ she said, speaking to The Guardian. ‘I don’t know. But I do believe that if a man had asked the same questions, the opprobrium probably wouldn’t have been quite as severe.

‘Will I change? No. Because I’m old enough and ugly enough to handle it.’ 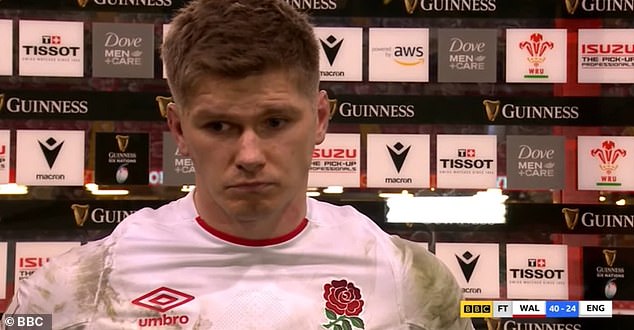 The BBC reporter went on to say that while ‘all of us’ in the industry receive abuse on social media, she said on this occasion, it was ‘off the scale.’

‘All I was doing was my job,’ she added. ‘And I just couldn’t get my head round what my alleged crime had been.

But just hours later she revealed she had been left in tears by online abuse.

Sonja tweeted: ‘Toxic, embarrassing, disgraceful, appalling. Just some of the feedback I’ve had. Thanks for using @ sign so it’s all hit home…’

McLaughlan: Owen, were England robbed by some poor officiating today?

Farrell: That’s not for us to talk about. We got our way back into it in that second half..there’s plenty that we can do better

McLaughlan: You were furious at Pascal Gauzere, you were having a long chat with him, when he’d clearly told you – talk to your team about the penalty counts..do you think England could have been more alert in that moment?

Farrell: I’d have to look back at it. I don’t know from where I was stood at that moment in time

McLaughlan: What were you trying to say to the referee? You clearly felt you had a case

Farrell: Look, there’s no point in us talking about it now. That’s for everyone else to talk about, we’ll focus on what we can control.

McLaughlan: Knock on or no knock on it was another controversial moment

McLaughlan: What you clearly couldn’t control was England’s penalty count how much do you feel that you shot yourself in the foot in the end there

Farrell: Yeah it was an issue for us and it’s something were going to have to look at, because I thought the effort was good today, the intent was good today. But we can’t let teams off that many times like we did today

McLaughlan: Can you explain why a side of England’s experience, a player like Maro Itoje in particular, the penalty count doesn’t look good for him..why they can’t just stay cool in that moment?

Farrell: It’s the whole teams’ job to make sure that they’re in the game, that we’re looking after each other, we’re all on the same page and we’ll look at how we can do that better

She tweeted: ‘Toxic, embarrassing, disgraceful, appalling. Just some of the feedback I’ve had. Thanks for using @ sign so it’s all hit home…

‘Now imagine getting inundated with abuse for doing your job. In my car crying. Hope you’re happy.’

McLaughlan went on to say she was concerned too many broadcasters were happy to play it safe – adding that she can’t ‘change’ because she’s been trained to be a ‘hardwired journalist.’

‘I’m curious about the sport. If you’re going to do pre- or post-match interviews, well, let’s do them properly,’ she added.

‘Let’s not stream out with platitudes. Because, what’s the point?’

‘Alex Sanderson [the Sale director of rugby] recently called me the smiling assassin.

‘But it’s who I am and I try to do it to the best of my ability because I think it’s the right thing to do.’

Much of the abuse McLaughlan received was in relation to lines of questioning over Wales’s first two tries which were seen as highly contentious decisions.

During the interview, she had asked Farrell whether England were ‘robbed by poor officiating’.

Farrell responded by saying: ‘That’s not for us to talk about.

‘We got back into it in the second half and didn’t quite finish it off. There’s plenty that we can do better.’

McLaughlan proceeded to ask Farrell if England should have been more switched on in the build-up to Josh Adams scoring a try.

Farrell replied by saying: ‘I’d have to look back at it. I don’t know from where I was stood at that moment in time.’

Subsequently, Farrell was asked what he had said to the referee Pascal Gauzere, but the England captain refused to be drawn on the incident.

McLaughlan also asked Farrell about the discipline of his team-mate Maro Itoje.