Rising interest rates should be good news for savers, but they are being badly let down by banking giants.

The Bank of England base rate has risen five times since December, from 0.1 per cent to 1.25 per cent.

But some major providers are yet to pass on a penny to savers. Others have edged up savings rates by a miserly 0.04 percentage points compared to the 1.15 base-rate rise.

The Bank of England base rate has risen five times since December, from 0.1% to 1.25%, but some major providers are yet to pass on a penny to savers

And while the average standard variable rate mortgage has risen by 0.51 percentage points since December, a typical easy-access account has edged up by only 0.26 points, according to data analysts Moneyfacts.

Financial results for the first three months of this year show banks’ interest margins — the difference between what they earn in interest payments from borrowers and what they pay out on savings accounts — have also increased.

With inflation expected to rocket to 11 per cent later this year, it means the value of savers’ cash is being severely eroded.

Households have around £986 billion in easy-access accounts. But, at best, big banks pay 0.25 per cent interest.

National Savings & Investments has done nothing at all for savers in its Investment Account, which still pays just 0.01 per cent.

The rate on its popular Direct Saver account has increased by 0.35 percentage points to 0.5 per cent — less than a third of the base-rate rise.

Even if it passes on the full increase announced last week, savers will still earn only 0.75 per cent.

Barclays, too, has not increased the rate on its Everyday Saver from the paltry 0.01 per cent it has paid for almost two years.

Lloyds’ Instant Gold and Halifax’s Liquid Gold accounts have risen by only 0.04 percentage points to 0.05 per cent. 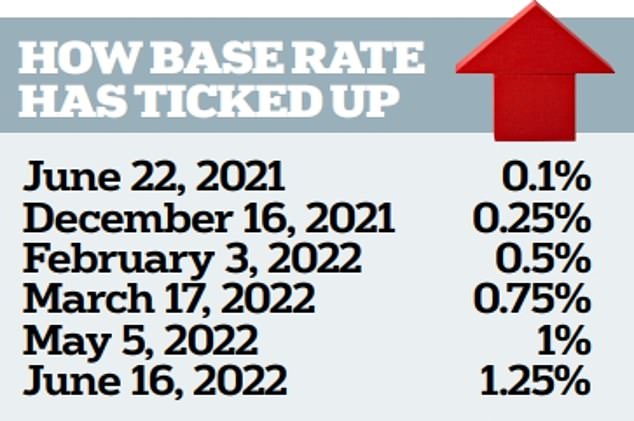 And there are a host of instant access accounts with major High Street banks, including NatWest and HSBC, where rates have edged up from just 0.01 per cent to 0.1 per cent.

James Blower, founder of website Savings Guru, says: ‘It’s extremely disappointing to see the big clearing banks moved quickly to pass on the base-rate rises to borrowers yet continue to pay rates as low as 0.01 per cent to savers.

‘Despite five base-rate increases, savers are not seeing the benefit as these banks are simply using the rises as a way of improving their net interest margin and ultimately their profits. It’s imperative for savers to move their money from these derisory accounts.’

Where to find better deals

But it’s not all bad news. No account comes close to matching spiralling inflation — now 9 per cent — but new banks have steadily been increasing their easy-access rates.

Yesterday, Zopa joined the battle for the top, lifting the rate on its Smart Saver app-based account to 1.4 per cent.

Last week both Aldermore and Atom banks raised their easy-access rates to 1.35 per cent. On a £10,000 deposit, you would earn an extra £139 with Zopa over a year than with Barclays on 0.01 per cent.

Skipton says no account will pay less than 0.85 per cent. This is good news for those who prefer postal or branch accounts to going online.

Rachel Springall, finance expert at Moneyfacts, says: ‘Savers stand to earn a much better return than if they store their savings with a big High Street bank.’

Fixed-rate savings deals are also climbing. The average one-year bond is 1.53 per cent — its highest level for nearly nine years. And yesterday the small Buckinghamshire Building Society launched a three-year bond at a top 3 per cent.

But James Blower says: ‘With rates expected to continue rising, I wouldn’t recommend fixing beyond one year.’

The top one-year bond is now 2.6 per cent with Atom bank through its smartphone app.

Cynergy Bank pays 2.57 per cent on its online account, while Coventry BS has 2.35 per cent fixed until August 2023 through branches or by post.

Coventry has also launched new bonds paying a very top 2.7 per cent for one year or 3 per cent for two. However, the offers are available only to those who have been customers since before January 2 this year.

Again, the big banks pay much less. Santander’s one-year bond pays around a quarter of the top rate at 0.6 per cent or 0.7 per cent for its 123 and Select customers.

HSBC is even worse at 0.45 per cent. Even Barclays pays only 1 per cent. Halifax and Lloyds don’t offer a one-year bond and pay 0.8 per cent for two years.

What about cash Isas

Tax-free cash Isas have fallen out of favour in recent years.

At the start of the new tax year in April, a month where money used to pour into these accounts, savers took out a huge £1.1 billion.

But if rates continue rising, Isas could soon stage a comeback.

In an era of low interest rates, the vast majority of savers did not have to pay tax because they earned less than the personal savings allowance. 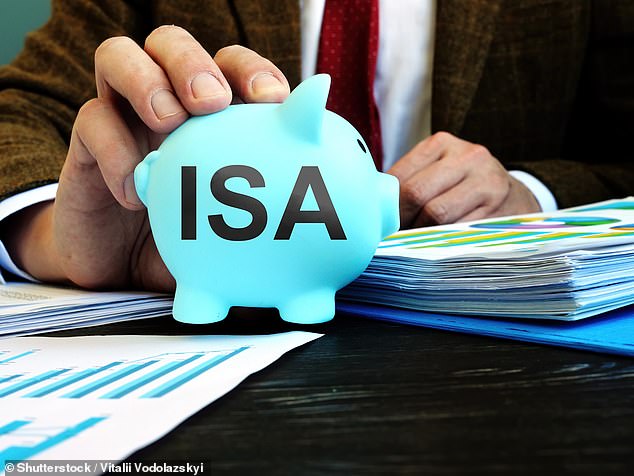 This allows basic-rate taxpayers to pocket £1,000 of savings interest tax-free, while higher-rate earners get £500.

But if savers begin earning more interest because of the new, higher rates, it could tip them over the tax threshold; a cash Isa would help to shield their interest from the taxman.

But fixed-rate cash Isas lag behind taxable accounts. The top one-year cash Isa from Virgin Money pays 2.06 per cent, well below the top rate fixed-rate bond from Atom at 2.6 per cent.