A foul-mouthed couple are standing by their decision to keep a Nazi flag flying high above their home – despite living across the road from a Holocaust survivor.

Bill and his partner Cheryl, who live in the small town of Beulah, four hours outside of Melbourne, have refused to take down the flag despite national outrage.

Making matters worse, the middle-aged couple live across the road from a frail Holocaust survivor, 83, whose parents were both killed in concentration camps.

The couple only moved into the home this year and claim they haven’t had a single complaint from their neighbours.

When confronted by A Current Affair, Bill refused to answer why the flag had been put up – instead telling reporters to get off his property while holding a pair of scissors.

‘Nobody has come here and even said anything about the f***king flag, not even a neighbour, not even nobody so just f**k off,’ he said.

But those living in the couple’s street have said otherwise, with several offering to take the flag down themselves.

‘This is absolutely disgraceful they fly this bloody thing. I swear to God I was going to jump his fence, pull the thing down and burn it in his driveway,’ one neighbour said.

‘Everyone is furious about it.

‘And they’re flaunting it in the face of people who were in the concentration camps, it’s just disgraceful.’

Another neighbour begged Cheryl to remove the flag after the news circulated around the country. 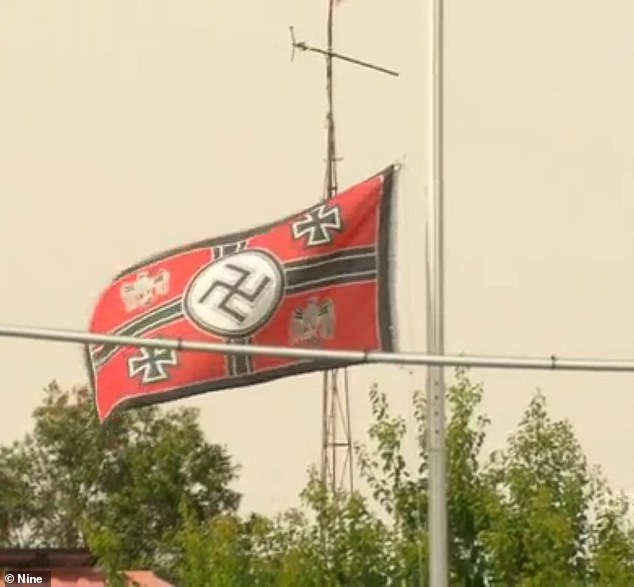 The flag has been flying over the street for a month, despite an 83-year-old Holocaust survivor living across the road

She refused, saying she was glad to have given the town recognition.

‘Good. I’ve put Beulah on the f***ing map then haven’t I?’ she was heard shouting.

The man said he offered to pull the flag down for her, to which she responded ‘F**k off’.

While Bill refuses to remove the Nazi paraphernalia, his 83-year-old neighbour is fearing for his life.

The man lost both his parents after they were gassed in a concentration camp and is now too scared to leave his home.

‘He’s still got the tattoo on his arm. Both his parents were gassed and he was next,’ one neighbour said.

‘He’s quite upset, he wants to be left alone, he doesn’t want any trouble with anybody,’ another Beulah resident said.

While the flag sparked outrage across the country, police said the couple weren’t breaking any laws.

But local police pleaded with them to take down the flag after complaints from the community of 400 residents. 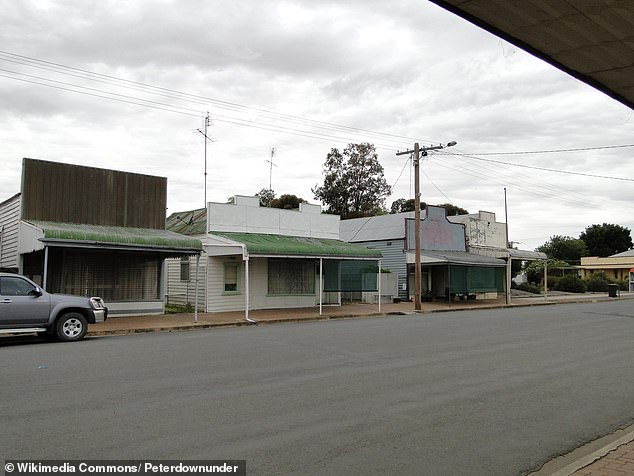 Residents of Beulah (pictured) which houses only 400 people have begged the couple to take the flag down, labelling it as ‘disgusting’

The flag eventually came down on Thursday morning but Bill refused to remove it himself – instead asking a police officer to do the job.

The swastika became a symbol for the German Nazi regime during the second world war which saw the deaths of six million Jews.

Victorian Premier Daniel Andrews labelled the actions of the couple as ‘disgusting’.

‘It’s absolutely disgusting behaviour, and if there’s any decency in that household they will take that flag down immediately,’ Mr Andrews told reporters.