Shopkeeper Kam Tanda had no time to think calmly. Heart racing, adrenaline pumping as he faced a robber armed with a gun, all he could think about was his infant son on the counter.

Three-year-old Ranveer — oblivious to any danger — was sitting facing his dad and watching a cartoon on a tablet.

Behind the boy stood a scruffy, white man in his 40s. He could have been an ordinary customer popping in for a loaf of bread or some milk, until he whipped out a pistol and shouted: ‘Put the money in the bag!’

Shopkeeper Kam Tanda from Birmingham, pictured here with his son Ranveer, who is now three, has twice chased armed robbers away from his store over the past two years

Instinctively, 42-year-old Kam went to hit the panic button under the counter to summon the police, just as he’d done two years earlier when his shop on the outskirts of Birmingham was first raided.

But Ranveer’s little legs, dangling over the counter, were in Kam’s way as he fumbled for the alarm.

So what does a dad do in such a terrifying situation? Hand over cash from the till in the hope a robber will leave without firing?

‘When you see a man pointing a gun behind your child, gut instinct just kicks in,’ says Kam today.

‘I picked up the baseball bat that I keep behind the counter and started swinging wildly to disarm him. I just had to protect my son.This guy looked high on drugs and could have done anything.

‘All sorts of things were going through my head. Was it a real gun? Would he use it? I reckoned if he was prepared to pull out a gun, even seeing a child sitting on the counter in front of him, he must be capable of pulling the trigger.’

Sixteen CCTV cameras covering Kam’s supermarket in the Kings Norton area of Birmingham relayed images of the drama to a monitoring screen in the back office.

Here, Kam’s wife of ten years, 37-year-old Harpreet, and their elder son Manoj, nine, watched with mounting horror the events of that Wednesday afternoon on August 9.

‘My wife opened the door as I launched the bat towards the gun and screamed: “What’s happening?” ’ recalls Kam, who bought the supermarket five years ago.

‘She was terrified but ran over and grabbed Ranveer, and I yelled: “Call the police.” While I was grappling with the gunman, my wife was pleading with the 999 call handler to stop asking questions and just send someone.’ 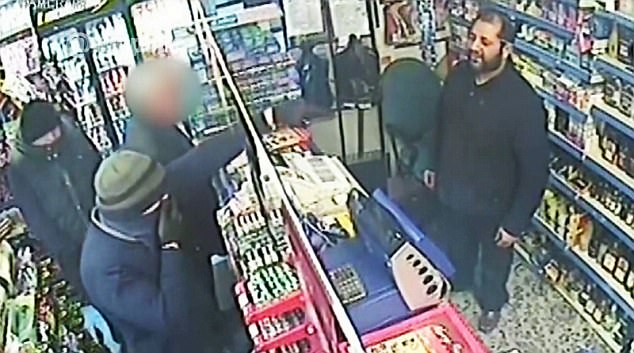 In January 2015, Mr Tanda fought off two armed attackers who wanted to rob his store

By the time police arrived some 15 minutes later, the gunman had fled empty-handed, leaving his cap, glasses, gun and bullets scattered on the supermarket floor.

He is still at large, but police later arrested a 51-year-old woman and 36-year-old man in a suspected getaway car, in connection with the attempted robbery.

Sitting before me in his office, rather fittingly under a portrait of Hollywood hard man Al Pacino, Kam says he’s been waking in a cold sweat at the thought of what could have happened.

But he would still do it all again. 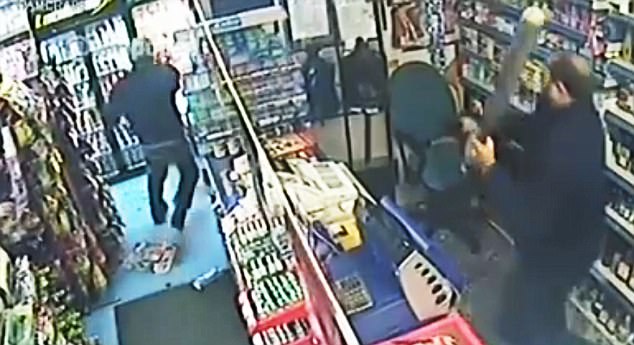 The raiders ran away after Mr Tanda, 42, raised a large bat prompting them to flee

When CCTV footage was released this week — two years after cameras captured Kam foiling an earlier armed raid with the same bat — headlines posed the question: ‘Is this the bravest man in Britain?’

Kam dismisses this notion, insisting that many people do braver things than him every day.

His wooden baseball bat was taken for forensic examination after the foiled robbery attempt, but today a new aluminium one is sitting behind the counter, ready for action should anyone be stupid enough to take him on again.

While some might regard his have-a-go heroics as reckless rather than brave, Kam insists he had no choice when faced with the sight of a gun barrel over his son’s head.

Today, he is clearly desperate for the gunman to be arrested and brought to justice quickly, and is frustrated at the time it will inevitably take for the police investigation to be completed. 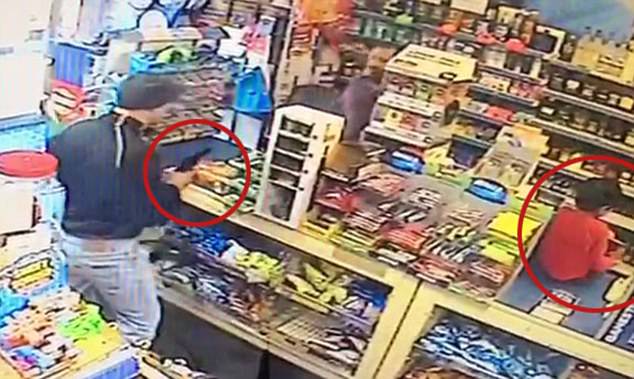 During the second armed raid earlier this month, Mr Tanda’s young son Ranveer is sitting on the counter, right while the raider is pointed a gun at his father, left

He also worries constantly about what might have happened if, in defending his family, he’d killed the perpetrator. Would he have been arrested and possibly charged with manslaughter, while the gunman still enjoyed his freedom?

Kam, who was born in Birmingham to shop-owning immigrants from India, says: ‘Twice my shop has been raided in attempted armed robberies. Someone has come into my shop with a gun. What do people expect me to do?

‘Wherever there is hard cash, there is always trouble. I can’t be seen as a soft touch.’

Kam’s well-stocked supermarket sits in a parade of shops on the edge of a council estate. A sign on the lamppost says it is an Alcohol Restricted area, but Kam claims he rarely, if ever, sees any police patrolling the streets there.

With a population of around 25,000 people, Kings Norton lies to the south-west of Birmingham and is predominantly white. Like most districts, it has its good and bad parts — the latter marred by poverty, unemployment, drug and alcohol misuse.

Big houses in leafy roads near the railway station give way to council estates which stretch behind the supermarket. Kam serves customers from both areas and says he knows 99 per cent of them.

It’s the 1 per cent he doesn’t know that worries him.

According to recent crime statistics, there were 47 robberies in Kings Norton between June 2016 and May 2017, accounting for 1.73 per cent of all crime in the district. Anti-social behaviour is by far the biggest problem facing police in the area (25.99 per cent), followed by violence and sexual offences (21.2 per cent).

Of all the 1,663 crimes under investigation during that period, no further action was taken with 82.74 per cent of cases. Of these, 65.07 per cent was because the investigation was incomplete or no suspect was identified.

Only 43 people were charged and appeared in court, of which 25 were sent to prison and four received a suspended sentence. The other cases resulted in fines, conditional discharge, community service or a finding of not guilty.

Kam Tanda is planning to write to the Commissioner of West Midlands Police demanding that more is done to catch and prosecute those responsible for attempting to rob shops, to deter others. 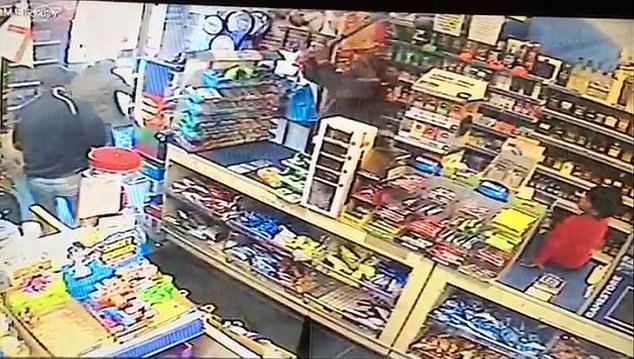 He cannot believe he has had to wield his bat twice to fend off gun-waving criminals, and is terrified for the safety of his two children. A spokesman for West Midlands Police said officers had attended Mr Tanda’s supermarket within minutes of his wife’s 999 call, and subsequently made two arrests.

She added: ‘One suspect is still outstanding. Due to the nature of the inquiry it will take a certain amount of time to thoroughly examine all the evidence and interview witnesses.’

Kam concedes the police did respond quickly — sending armed response units, a helicopter and forensic teams — but is clearly impatient with a justice system he feels fails people like him.

Working more than 12 hours a day, seven days a week, to support his family, he has no time for talk of police budget cuts and increased workloads, or the social ills that may drive someone to wave a gun in front of a child.

It greatly concerns him that no one has been prosecuted for the first raid on his store in 2015.He claims he passed on the names of alleged suspects to police, given to him by customers, and is baffled that this alone hasn’t been enough to see them in court.

‘When my parents first opened a shop in Birmingham more than 30 years ago, there were no guns,’ says Kam, whose father is now retired and whose mother died last December aged 65. ‘They’d never have dreamt someone would wave a firearm — I don’t know if it was real or a replica — in front of their grandchild.’

In 2015, Kam’s shop was busy with customers when two young white men wearing hats and scarves pulled up over their faces walked into his supermarket at around 7pm on January 4.

‘Then I saw the gun pointing at me and thought “Here we go”. So I opened the till and picked up my phone, which had a panic button on it — but he grabbed it. I was preparing to give him money when his accomplice ran past him to pick up a £15 case of lager.

‘As the gunman turned to see what he was doing, I saw my chance. I dived down, pressed the panic button and grabbed the bat. Again, it was just gut instinct.

‘The bat smashed into the Lottery terminal, the screen went flying and hit the guy with the gun on the shoulder and head.

‘He legged it. It all happened so quickly. It’s only afterwards that you think: “S***, he had a gun.”

‘Within minutes, armed police arrived and cordoned off the area. But nothing came of it. What is going to stop these people doing it again? If they’re high on drugs who knows what they’re capable of?’

A spokesman for West Midlands Police said of the 2015 investigation: ‘Although names were put forward and investigated, there was no corroborating evidence to link them to the incident, therefore no charges could be brought. Should further information come to light, we would investigate.’

The foiled raid earlier this month is still under investigation.

Today, it’s business as usual at the supermarket. Kam’s sons either bustle around the shop or study in the office or play with their toys. There are extra staff around.

‘My little boy is three and follows me around like a shadow,’ says Kam, who adds he has no intention of selling up or moving.

‘Ranveer is too young to know what was happening at the time, but he talks now about his dad fighting a man, the gun and the police coming. My elder son saw it happen on the screen in the office, but he keeps things bottled up.

‘My wife was scared to go back on the till but we’re never here alone; there’s always other staff.

‘I am constantly on alert. It never goes out of my head — but that just makes me more fearless.’