Bjorn again! At 15, Borg’s son is just like the five-time Wimbledon champion

Blink and you might believe they had turned back time.

This is not Bjorn Borg dashing across the tennis court in his heyday, however, but his son Leo in action in London yesterday.

And the 15-year-old is already hoping to follow in the footsteps of his father, a five-time Wimbledon singles winner, by playing at SW19 next month. Leo was competing yesterday in the Aspall Tennis Classic at the Hurlingham Club in Fulham. 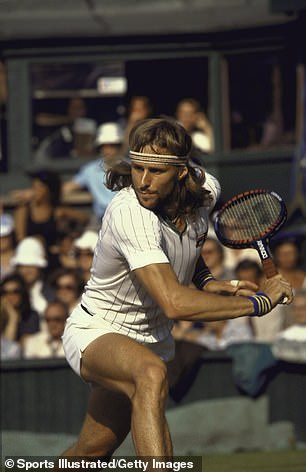 Bjorn again! Borg’s son, 15, (left) turned heads for his canny resemblance to his father as he competed  in the Aspall Tennis Classic at the Hurlingham Club in Fulham. Right: Bjorn Borg at Wimbledon in 1980

Watching fans would have spotted how the teenager’s close-set blue eyes and long blond hair give him more than a passing resemblance to his famous father, 63.

Leo, whose mother is Borg’s third wife Patricia, has a long way to go to match the Swede’s achievements though. He is currently 352nd in the boys’ world rankings, meaning he will need to be offered a wildcard if he is to make his debut in the Wimbledon junior event – 39 years after his father beat arch-rival John McEnroe in the epic 1980 final.