There was little men wouldn’t do for Robyn Lindholm.

They would scramble to light her cigarettes, line-up to buy her drinks and eagerly shove cash into her garter.

Some would kill for her.

The former stripper was found guilty of murdering her ex-fiance on Thursday.

She is already serving time for the remorseless killing of another man in 2013.

Robyn Lindholm was known as Colette when she was getting naked in bars across Melbourne. She had lived a charmed childhood, but there was a darkness inside her that was revealed in brutal fashion 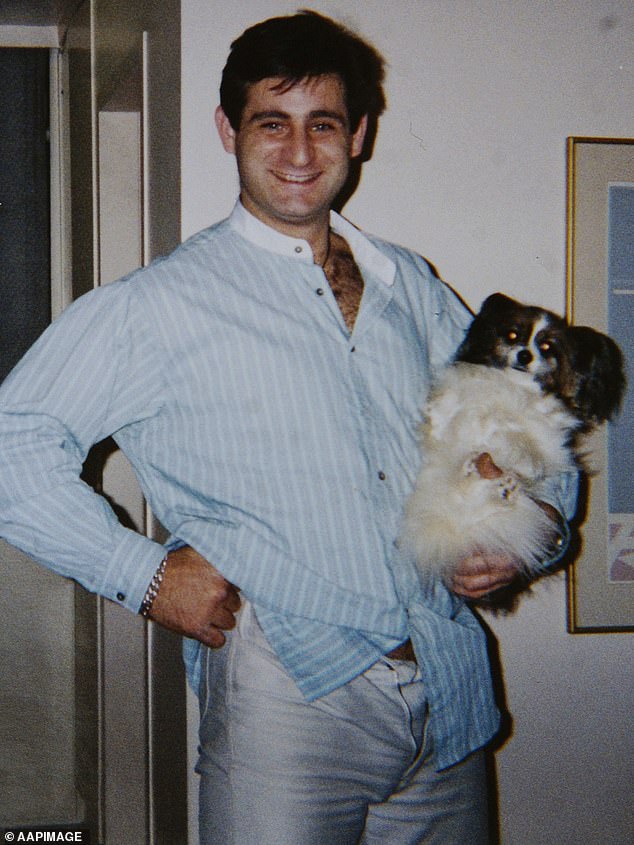 Police put out a photo of George Templeton in 2005 when he went ‘missing’. His partner Robyn Lindholm put on a display that was worthy of a Logie

Lindholm was the kind of woman who could have been anybody and done anything with her life had she remained on the straight and narrow.

Instead, she will go down in Australian history as arguably its most lethal ‘femme fatale’.

Some say she is much worse than a simple ‘black widow’. The term ‘serial killer’ fits her like a lace glove.

They were all terms a Supreme Court of Victoria jury were forbidden from hearing while Lindholm was on trial over the past month for the murder of her former fiance George Templeton.

She was found guilty of his murder on Thursday.

Lindholm was entitled to a fair trial after all, but few would care much about the fairness of her life from this point on.

Then again, Lindholm has always been a master manipulator.

Even as she was brought to and from the Supreme Court dock where she spent weeks at a time facing murder trials, Lindholm would chat with her captors like she was an old friend.

Prison sources would say she was likable, seductive, but deadly.

Sentenced to 25 years in jail in 2015 over the murder of another lover, Lindholm quickly moved on from the world of men and took up a lesbian lover at Dame Phyllis Frost women’s prison just outside of Melbourne.

If she couldn’t get her hands on a man, well, a woman would do just as nicely, a source said. 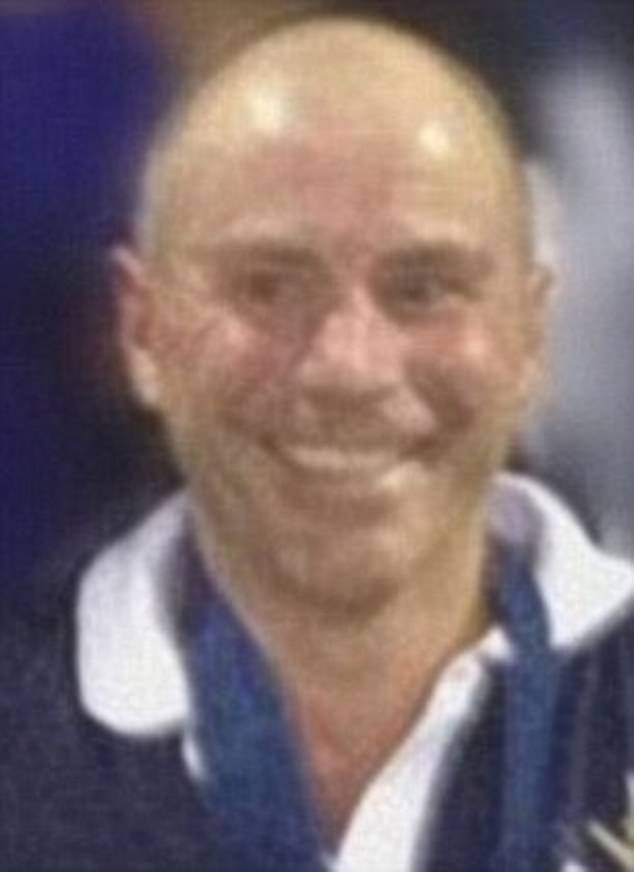 Hawthorn gym owner Wayne Amey had been involved in a property dispute with Robyn Lindholm over a farm they had owned in Bittern, south east of Melbourne, when she decided he had to die 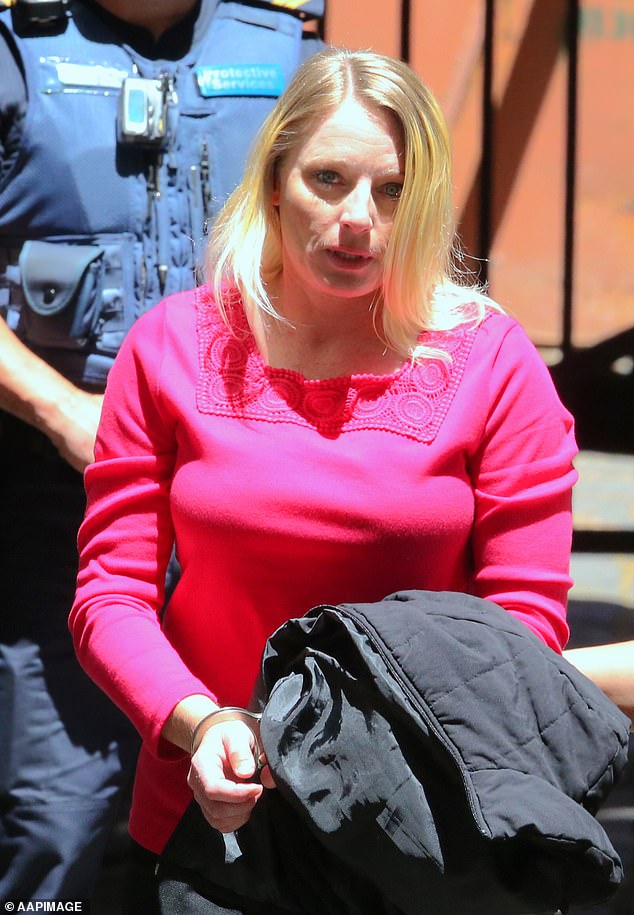 Robyn Jane Lindholm pleaded guilty to murdering Wayne Amey in 2015. She was later brought to trial over the murder of another former lover

But it was among the world of sleazy, sweaty men that Lindholm flushed her life down the toilet and became a remorseless killer.

Templeton was 38 on May 2, 2005 when he disappeared from the Reservoir home, in Melbourne’s north, that he shared with Lindholm and his teenage son.

Templeton was a standover man who went by the name George Teazis.

Lindholm had been in a volatile, six-year relationship with the former hired goon who had been working hard to go straight.

But she had also been getting it on with another bloke on the side by the name of Wayne Amey aka ‘Batman’.

Police claimed they chose a night they knew he would be honouring his father’s death, so that he would not suspect any impending foul play.

On the night he would vanish, witnesses claimed he had been happy and lovingly kissed Lindholm’s wound after she burnt her hand.

The jury heard Lindholm made sure he got plastered drunk and likely helped him along with some sleeping pills.

When she cooked up a reason to leave, Amey – assisted possibly by some mates – attacked Templeton on the couch.

Detectives believe he was disposed of at sea.

When Templeton vanished, Lindholm put on a display for the television cameras worthy of a Logie nomination.

Crown prosecutor Ray Gibson, QC, would claim Templeton had been controlling of Lindholm.

‘There were arguments, he was a significant brake on her freedom. George was suspicious of her. He was referred to in derogatory terms by the accused. She referred to him as the plastic gangster who was going nowhere,’ he said.

‘More importantly, he stood in the way of her being able to pursue her relationship with the fit, sexy, leather pants wearing Amey.’ 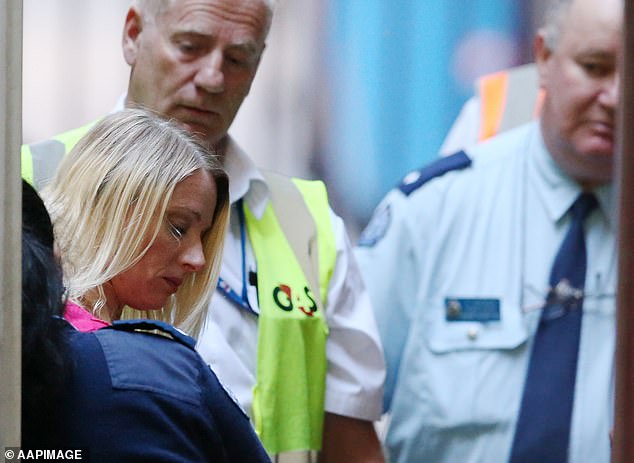 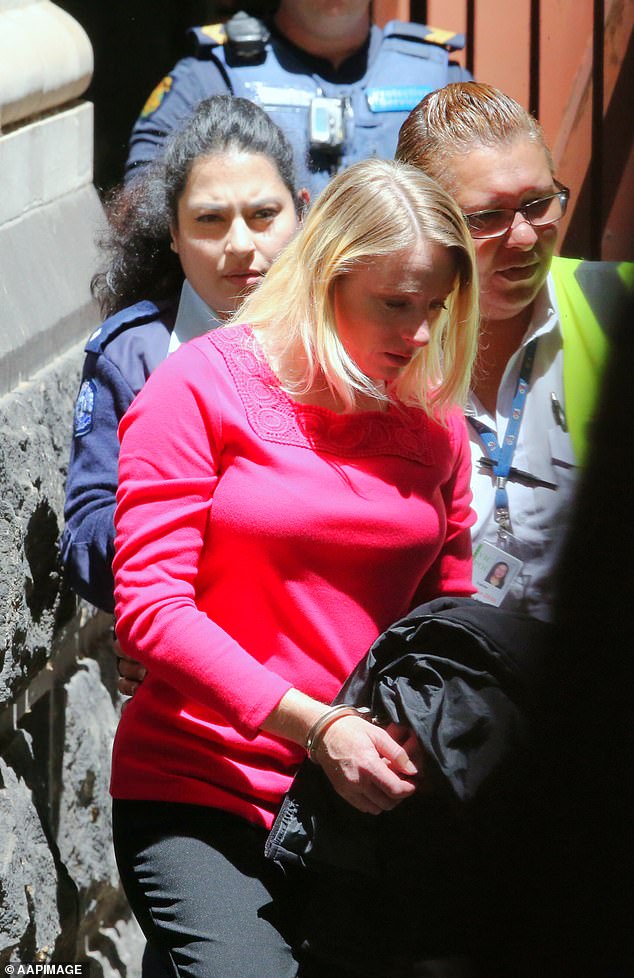 Robyn Lindholm is friendly with prison staff and known to chat with them happily and she is led to and from court. They know not to get too close to her because she is also deadly

Police conceded months after Templeton disappeared that he may not have wanted to be found but held grave concerns because he had not used his mobile phone or bank accounts and had been looking forward to a prepaid Queensland holiday with Lindholm.

Police long suspected he had been murdered by Amey at the instructions of Lindholm, but the case went cold when Victoria Police’s Missing Person’s Squad was disbanded.

And Amey wouldn’t live long enough to rat on her.

His body was found in central Victoria in December 2013 beaten and stabbed.

Torsten Trabert and John Anthony Ryan were later found guilty of his murder after Lindholm confessed to police she had ordered him dead.

Trabert had been in a relationship with Lindholm too.

A witness at that trial gave evidence that they heard someone call from the boot of a car being driven by the one of the men, ‘You don’t have to go this far. I’ll do anything.’

The trio went to a rural pub for a celebratory drink after the bloody murder.

Like Templeton, Amey had been Lindholm’s ‘white hot’ partner before things got ugly. 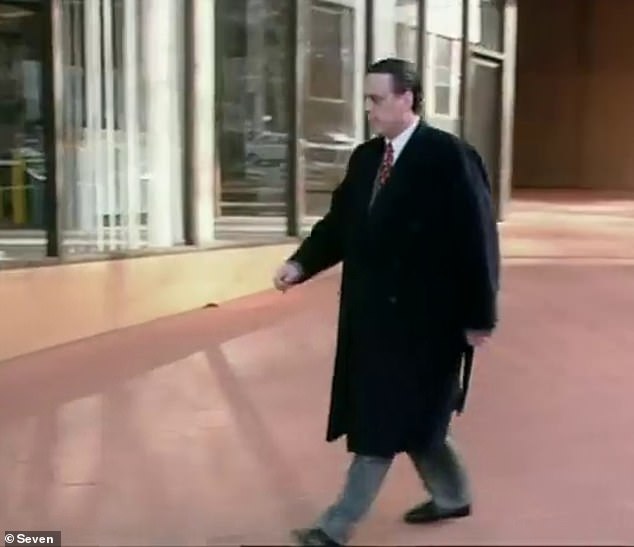 Robyn Lindholm bragged that she had been the girlfriend of Alphonse Gangitano, who was known as the ‘Black Prince of Lygon Street’ 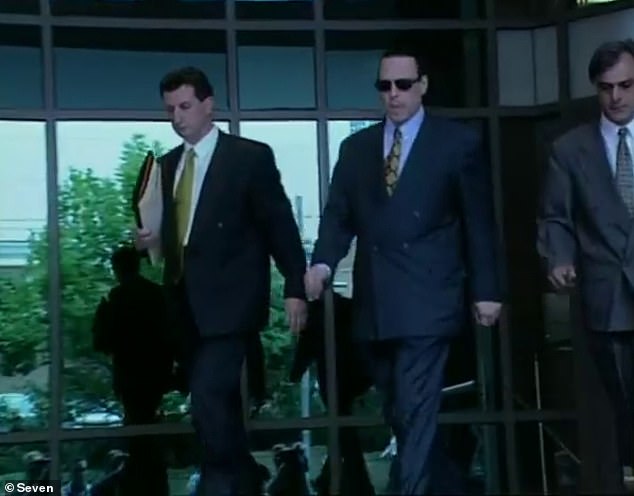 Alphonse Gangitano was murdered in 1998 in his own home by Jason Moran. Gangitano had  shot dead petty criminal Gregory John Workman, which sparked Melbourne’s gangland war

Prosecutor Gavin Silbert SC labelled Lindholm a ‘femme fatale’ who controlled men and had been involved in an intense sexual relationship with Trabert that involved large amounts of drug use.

‘Mr Trabert was infatuated with her. He left his wife and children,’ Mr Silbert said. ‘He was involved in an intense sexual relationship with her.’

Police also believe Lindholm may have been involved in the disappearance and murder of exotic dancer Shari Davison, 26, in 1995.

Lindholm was working under the professional name Collette at the same stripper agency, Simply Irresistible, as Davison before she went missing.

It’s said they were close friends.

It was reported in The Age in 2016 that Templeton had been named at the inquest into the 1995 disappearance and murder of Davison as having at one time put a gun to a woman’s head during a discussion about drugs.

Not long after she vanished, Lindholm became an item with another soon-to-be dead identity: Alphonse Gangitano.

Known as the ‘Black Prince of Lygon Street’, Gangitano is fingered as the man who started Melbourne’s infamous Underbelly War and was murdered in 1998.

Although Lindholm had nothing to do with Gangitano’s demise, a jury heard she had ordered Amey killed over a bitter property dispute involving a farm they owned in Bittern, south east of Melbourne.

Lindholm was angry, vengeful and bitter over the break-up of her relationship with him and the loss of the farm.

She had hoped to live the remainder of her life quietly raising her Arabian horses on the property.

During her pre-sentence hearing, it was revealed there was no sound reason for Lindholm to choose the wicked path she had.

She told doctors she had ‘the most wonderful upbringing and childhood she could hope to have’.

Lindholm had attended Kilvington Baptist Girls Grammar primary school and then Malvern Girls Secondary college where she completed her VCE in 1990.

She had been a talented student and enrolled in a Bachelor of Science degree at Monash University.

She dropped out after a year to pursue an animal husbandry course at Box Hill TAFE.

As a teenager, Lindholm had been a state and national ice skating champion and performed in the Torvill & Dean show when it was in Australia.

She took up horse riding at 11 and was given her first horse by her father a year later.

A hard worker, Lindholm was 23 when she bought a 74-acre farm in Glenhope, north of Melbourne.

But her life took a turn when she was hired as a barmaid and then as a hostess in the casino’s high rollers’ exclusive Mahogany Room.

It was there she met the owner of a strip club, who would change the course of her life with a simple job offer.