B&M storming ahead with profits up 122%

Budget retail chain B&M has lured in a new wave of customers during lockdown, helping it boost its first half profits by over 122 per cent.

Food and cleaning products proved the most popular products at B&M’s stores in the last six months, the group told This is Money.

Bucking the trend for dwindling profits and shop closures, B&M is opening nine new stores before Christmas this year, with over 30 further more planned before the group’s financial year comes to an end.

Storming ahead: Cheap retail chain B&M has lured in a new wave of customers during lockdown, helping it boost its first half profits by over 122%

Having remained open during lockdown, B&M said it was seeing a ‘broad’ range of customers use its its shops, particularly from ‘low to middle’ income households.

The retailer said: ‘It is these same households who form the largest demographic by both number and overall consumer spending in the UK. This combination of new customers, together with existing customers buying into new categories, creates an exciting opportunity for B&M to make further market share gains.’

The budget chain focuses on everyday essentials such as food, personal care and household care products, while it has a large network of out of town stores which have been preferred by consumers compared to city centre locations during lockdown.

B&M is all too aware that many shoppers are tightening their purse strings as lcokdowns rumble on and job cuts continue.

It said: ‘As a value retailer, the B&M appeal is strengthened when large sections of the population are concerned about their personal finances or are having to live within constrained household budgets.

‘This is important, as it means B&M can play a crucial role in helping people navigate through the crisis.’

B&M has told This is Money the locations of the stores it is opening before Christmas this year:

Amisha Chohan, an equity research analyst at Quilter Cheviot, said: ‘B&M is winning market share and has attracted a new customer base (23% of all shoppers in June 2020 had not visited a B&M in the preceding 5 months) who are beginning to shop with them regularly.

‘We believe B&M will continue to outperform peers especially in a recessionary environment, as consumers trade down.’

B&M UK revenue swelled by 29.5 per cent to £1.89billion, with like-for-like revenues up 23 percent. The retailer said like-for-like sales growth in Britain was expected to moderate over the second half, but so far in the third quarter had been at a similar level to the first half.

B&M has revealed the nine locations it plans to open new stores in before Christmas this year. Today, the group opened a new store at the Hull Prospect Centre and on 17 November will open in Quedgeley, near Gloucester.

On its store plans, B&M said it was ‘on track to open 40 to 45 gross new B&M UK stores this financial year, offset by 10 closures.’

The FTSE 100-listed company has also dished out good news for shareholders today, after announcing it will pay a special dividend on top of an interim distribution to return surplus cash to shareholders after a strong first half. 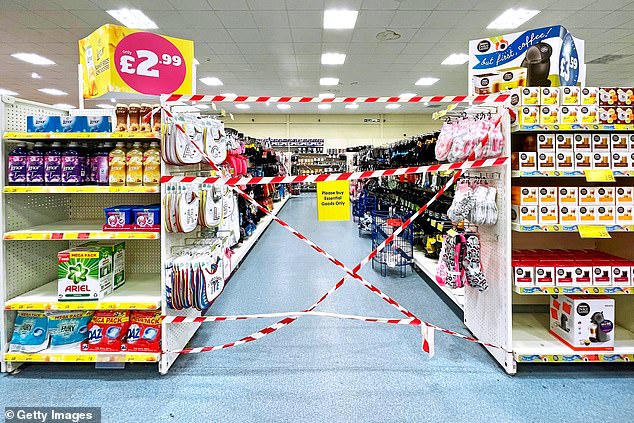 Odd times: B&M in Cardiff during the circuit breaker lockdown in Wales

Ms Chohan, of Quilter Cheviot, said: ‘B&M continue to fire on all cylinders within the UK and France; sales strength has been helped by their out of town stores, a breadth of value product offering has driven B&M’s success, alongside with perfect execution of their discount offering.’

From its first store in Blackpool, Lancashire, B&M has now has 655 B&M stores, employing over 28,000 staff. The group has returned £3.7million it received via the furloughing scheme back to the Government.

The group occupies over 2.9million sq feet of warehousing space across the country, which it claims, ‘enables us to buy in bulk and offers a single delivery point to suppliers.’

Earlier this month, B&M announced that it would start selling Cadbury Favourites boxes in the UK. Some of the chocolates, such as Moro and Dream, cannot be readily purchased in Britain.