It was an iconic bomber which was described as ‘beautiful’ by Nazi Luftwaffe chief Hermann Goering.

The Mosquito, which was made mostly of wood, was one of the world’s fastest planes when it first went into production in 1940 – when Britain was fighting Adolf Hitler’s Germany in the Second World War.

But Sir Arthur Harris, the head of the RAF’s Bomber Command, hated the name and tried to have it banned from being mentioned in public, formerly top secret papers have revealed.

The controversial ‘Bomber’ Harris said in a wartime memo that ‘the word “mosquito” is connected in the minds of the public with an insect which produces an irritating but normally not particularly effective sting’.

A De Havilland bomber is pictured during flight in 1944. The plane was one of the world’s fastest aircraft when it was first built, capable of reaching speeds in excess of 400mph (644kmh)

Writing to Air Vice Marshal Don Bennett, who was the commander of the Royal Air Force’s Pathfinder squadrons, Harris added: ‘For some time this headquarters has endeavoured to impress upon the public generally that Mosquito raids are most serious matters for the enemy, and as a consequence have attempted to have the word Mosquito omitted whenever possible from communiqués.’

Author Will Iredale quotes from the memo for the first time in his upcoming book The Pathfinders, which is published later this month.

He came across the document in the RAF Museum at the former Hendon aerodrome in North London.

The Pathfinders were formed in 1942 and were tasked with helping RAF bombers find targets at night during raids over Germany.

Mosquitos and other bombers would drop flares which following attacking planes would use to guide them to their targets. 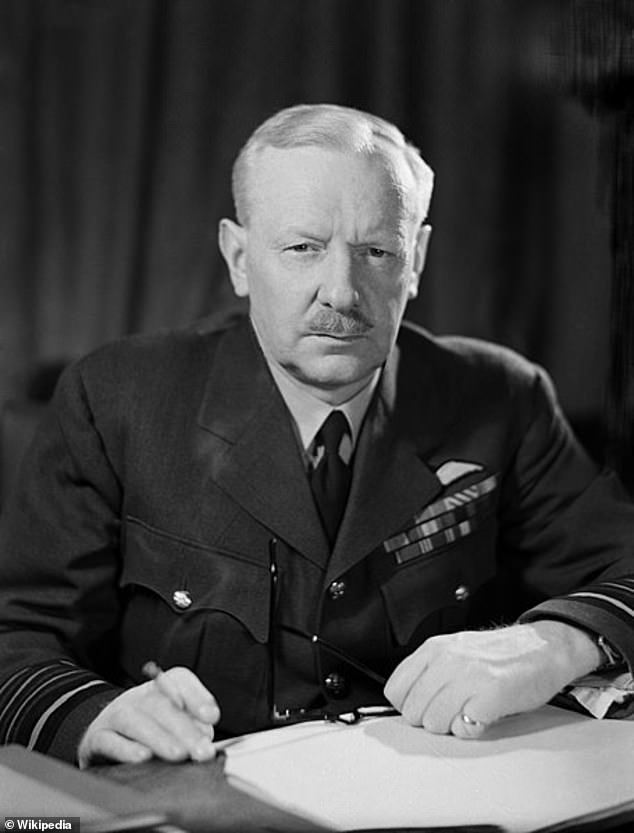 Author Malcolm Gladwell has doubled down on the claim made in his new book that Bomber Harris was a ‘psychopath’, despite criticism from the war hero’s grandson

The Mosquito, known simply as ‘Mossie’ to those who flew in it, had a timber frame and plywood body and was powered by two Rolls-Royce Merlin engines shouldered on the wings.

It could reach speeds of around 400mph and was made from wood because aluminium was so scarce at the time.

Workers such as carpenters, cabinet-makers and those in piano factories were employed to build them because they already had the necessary skills.

One notable mission was Operation Jericho in 1944, in which Allied forces bombed Amiens prison in Nazi-occupied France, with the aim of rescuing members of the French resistance who were set to be executed.

WHAT WAS THE DE HAVILLAND MOSQUITO?

The De Havilland Mosquito was a fearsome fighter plane with a twist – it was made of plywood.

The ‘Wooden Wonder’ was rushed from design to take-off in the space of just a year in the heat of WWII.

Based on a timber frame and plywood body and powered by two Rolls-Royce Merlin engines, the aircraft was capable of hitting speeds in excess of 400mph (644kmh).

Its bizarre wooden construction was a product of opportunity – wood was cheap and easy to come by, unlike aluminium, and carpenters, cabinetmakers and piano-makers could be employed to build the crafts without extra training.

The plane could carry a maximum weight of 23,000lbs (10,432kg) and be fitted with four 20mm cannons for direct combat or be equipped with bombs to drop on land or sea targets.

Fitted with radar and painted in camouflage, the planes were used throughout the war by Allied forces from the UK, US and Russia between their maiden flight in 1940 and the final mission in 1945, before production was shut down in 1950.

With a wingspan of 54ft 2ins (16.5m) the planes had a flight range of 1,485miles (2,389km), although this, and other specifications, varied across the more than 35 variations of the aircraft which were built during its decade of life.

Goering, who headed up the German air force, is said to have called his own aircraft designers ‘nincompoops’ in comparison to the British when he found out about the plane.

He said: ‘It makes me furious when I see the Mosquito. I turn green and yellow with envy.’

‘The British, who can afford aluminium better than we can, knock together a beautiful wooden aircraft that every piano factory over there is building. They have the geniuses and we have the nincompoops.’

The plane was originally built as a surveillance aircraft but was so fast and versatile that it was sent into combat.

Its speed was so great that Geoffrey de Havilland said it didn’t need to be armoured.

He said in 1939: ‘We believe that we could produce a twin-engine bomber which would have a performance so outstanding that little defensive equipment would be needed.’

A total of 7,781 of the aircraft were built and they were used by air forces in the UK, US and Russia until their final mission in 1945, when they took part in a hunt for German submarines which may have been trying to escape surrender.

Over the course of the war, between 300,000 and 600,000 civilians were killed by Allied bombing, which almost totally destroyed cities such as Dresden.

Sir Arthur, who died in 1984 at the age of 91, refused to accept a peerage for his war service because his men had been denied a campaign medal.

The statue of Bomber Command pilots, in London’s Green Park, had paint thrown over it in 2019.

The memorial was put up despite objections from some German politicians.

In 2013, an interview with Sir Arthur emerged in which the former RAF commander said he would order the fire-bombing of Dresden again.

The attack, which was carried out by both RAF and US pilots over the course of just three nights in February 1945, killed an estimated 25,000 German civilians.

Speaking in the interview, which was filmed in 1977, Sir Arthur said he would do it again if he had to. 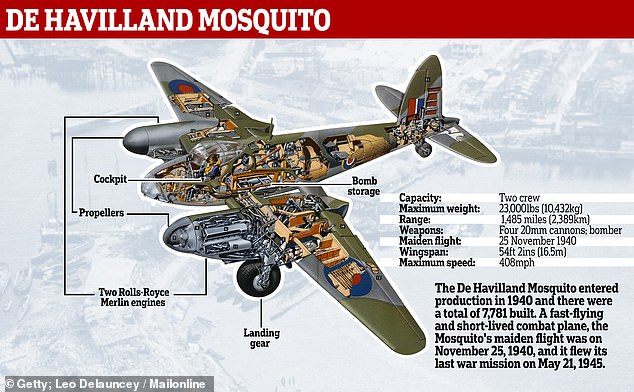 The plane could carry a maximum weight of 23,000lbs (10,432kg) and be fitted with four 20mm cannons for direct combat or be equipped with bombs to drop on land or sea targets. it was powered by two Merlin engines which powered individual propellers 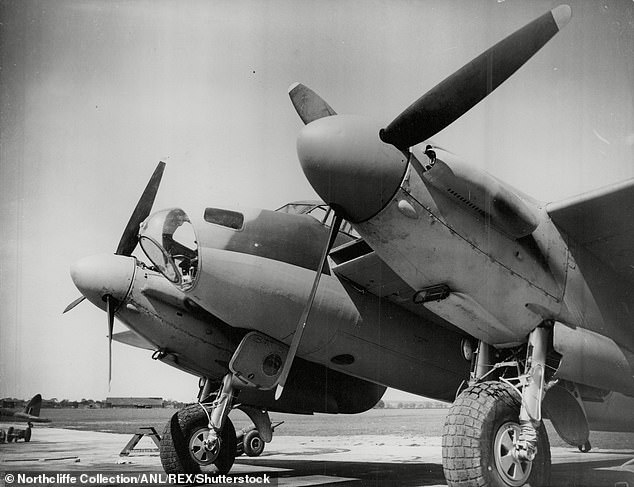 The planes were originally built for surveillance but then, because of their speed, were used in combat and could be fitted with cannons or carry bombs for attacking land or sea targets 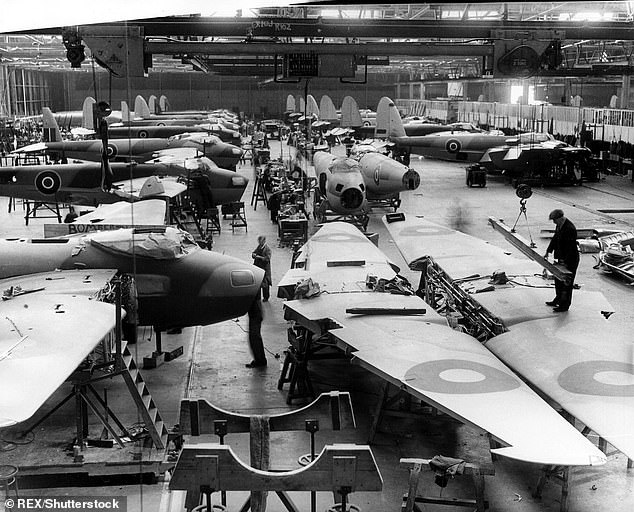 A total of 7,781 Mosquito planes were built around the world after it was first put into production in 1940, and the fighter/bomber flew its final mission in 1945 at the end of the Second World War

He said: ‘If I had to have the same time again I would do the same again, but I hope I wouldn’t have to.’

Sir Arthur also claimed that the bombing ‘kept over a million fit Germans out of the German army… Manning the anti-aircraft defences; making the ammunition, and doing urgent repairs, especially tradesmen.’

Harris also hit back against the notion that area bombing was his idea. He instead saidit was already Government policy.

He said: ‘I lived in a shower of directives from the day I took over to the last day of war.

‘The directive when I took over was that I wasn’t to specifically aim at anything unless ordered to do so and to blast the German cities as a whole.’

The Pathfinders is published by WH Allen on July 15. 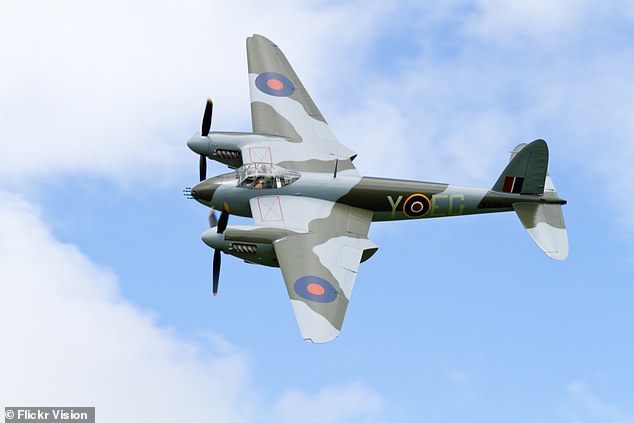 Born in Cheltenham in 1892, Sir Arthur Harris emigrated to Rhodesia, modern day Zambia and Zimbabwe, at the age of 17, returning to England at the outbreak of the First World War to serve his country.

By the 1920s he was a Squadron Leader serving in the Middle East. Following the collapse of the Ottoman Empire at the end of World War One Britain and France were in control of the region.

In 1922, with rebellions rising in Mesopotamia – modern day Iraq – Sir Arthur took part in bombing raids over villages held by rebel tribes. It was a learning curve for the RAF and was said to have inspired later attacks on German cities during the Second World War. 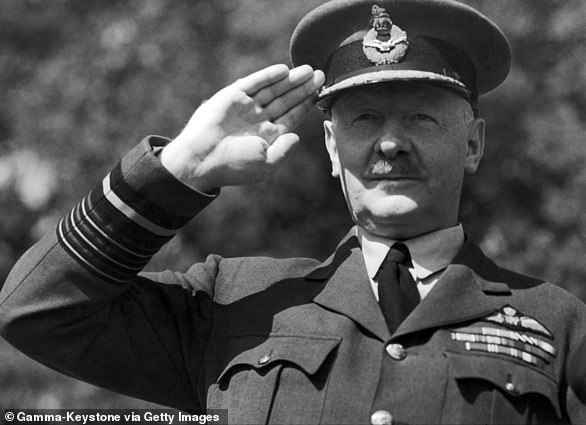 Born in Cheltenham in 1892, Sir Arthur Harris emigrated to Rhodesia, modern day Zambia and Zimbabwe, at the age of 17, returning to England at the outbreak of the First World War to serve his country

Historian AJP Taylor wrote of Sir Arthur: ‘He genuinely believed that the German people could be cowed from the air as he had once cowed the tribesmen of Irak (sic),’ according to the BBC.

Before the outbreak of the Second World War, he would serve in India, Palestine, Egypt and Persia.

In the early part of the war, the Bomber Command’s raids had little effect. The bombers only flew at night to reduce the danger of being shot down, but with primitive navigation equipment, this made it difficult to identify and hit a small target.

In 1941, it was decided that The Bomber Command would target entire industrial cities – known as area or blanket bombing.

This policy was endorsed by Churchill and formally adopted in early 1942 as Sir Arthur took the helm of The Bomber Command.

Harris said at the start of the bombing campaign that he was unleashing a whirlwind on Germany.

Allied raids in February 1945 tore through the East German city of Dresden, killing up to 25,000 people

Working class housing areas were targeted because they had a higher density and firestorms were more likely. This disrupted the German workforce and the Germans capability of producing more weapons.

In May 1942, now serving as Commander in Chief of  RAF Bombing Command, Sir Arthur organised the first ‘Thousand Bomber Raid,’ launching 1,047 aircraft against Cologne in an overnight bombing raid to overwhelm enemy radar and defences.

Over 3,000 buildings were reportedly destroyed and another 9,000 damaged.

Two more raids with similar numbers of aircraft happened in 1942 under Sir Arthur’s leadership: an ineffective attack on Essen and a raid on Bremen, which targeted factories and shipyards.

In July 1943, the Commander-in-Chief oversaw the Battle of Hamburg, codenamed Operation Gomorrah, which was a series of air raids which lasted for eight days and seven nights.

In February 1945, with the Second World War just three months away, Sir Arthur oversaw the firebombing of Dresden, which killed 25,000 German  people.

In the space of two days, 3,900 tons of bombs and incendiary devices were dropped on the city in East Germany.

In 1975, Sir Arthur defended the attack on Dresden, saying: ‘The bombers kept over a million fit Germans out of the German army… Manning the anti-aircraft defences; making the ammunition, and doing urgent repairs, especially tradesmen.’