Boots has decided to close 59 of its least-used stores and move pharmacists to busier branches amid the coronavirus crisis.

The High Street retailer said in a statement today that it needed to make sure it had enough colleagues playing their ‘vital roles’ where they were most needed.

It also stated it would be sending colleagues home who are working in stores that are not busy, that includes 25 London stores and stores that are in city centre or shopping centre locations.

‘To achieve this, we are temporarily closing a small number of stores that are very quiet at this time’, a spokesperson said.

It had originally planned to close 60 stores including the Leicester Fosse Park store, which will now remain open to the public.

Boots today announced it will be closing its 60 least-used stores nationwide on April 15 in response to the coronavirus crisis. File image of Boots worker in London today used

London stores that will close from Friday 10th April 2020

25 London stores will close from Friday 10th April, while the remaining stores will also close on April 15th.

Boots said the 25 London stores that will close will include Stratford City, Covent Garden Long Acre, its Oxford Street units and stores at stations such as Liverpool Street and Victoria Cardinal Place.

The retailer has over 2,400 branches across the UK.

It added: ‘All over the country, we are working tirelessly to support the NHS and to provide our customers with the advice, healthcare, medicine and products that they need.

‘We are committed to being there for the people that need us and we will not leave a community without a pharmacy.

‘We would like to thank our colleagues for their work and our customers for their support and generosity.’

‘The closing stores are typically in city centre or shopping centre locations and are usually within a few minutes’ walk to the next closest Boots pharmacy.

‘Customers will be able locate their nearest stores by visiting Boots.com’.

The closures come after weeks of Boots trying to keep their staff members staff with provisions such as perspex separating customers and pharmacists and shop assistants. 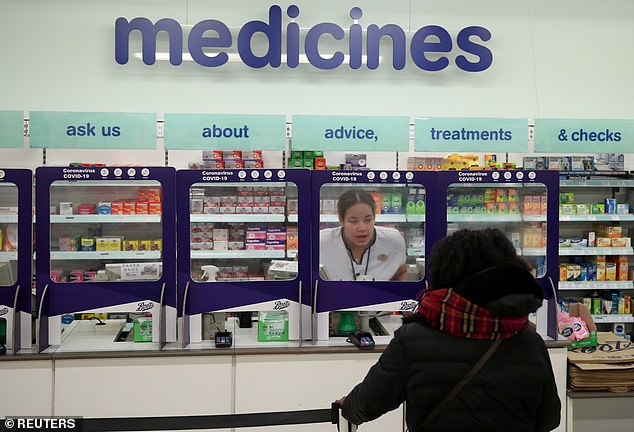 A pharmacist speaks to a customer with a safety screen between them at a Boots store in London, as the spread of the coronavirus disease (COVID-19) continues 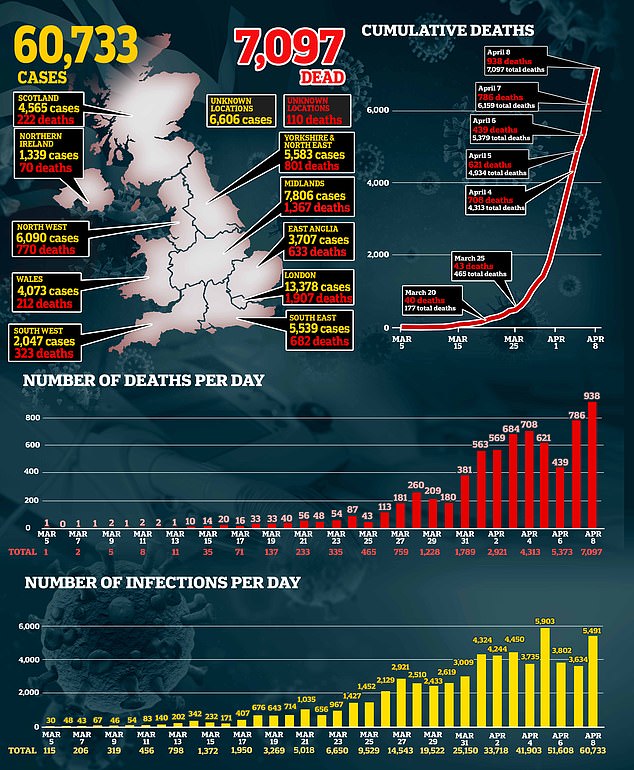 UK stores that will close from Wednesday 15th April 2020

The firm had previously warned customers that it would stop them entering the store to simply browse for items, after many customers were repeatedly going into the shops to buy non-essential products such as make-up.

In order to respond with government guidelines on social distancing and to protect workers, Boots had said it may force customers to state what they were shopping from before entering stores.

Some Boots stores had already cordoned certain areas of the stores off so that customers would only be able to shop for medicines and essential items such as nappies and hand washes and sanitisers.

In response to many shopping for non-essential items, the retailer today launched a series of bundles, so that people can just come into the shop and pick up the package without having to look around for essential items.

There is a ‘Baby Essential Bundle’, that costs £30 and includes items such as talc, nappy cream and cotton wool pads.

There is also a ‘Toiletries Essentials Bundle’ that also costs £30 and includes items such as toothpaste, deodorant and hand cream.

Then the pricier ‘Health Care Essentials Bundle’ priced at £35  includes items such as paracetamol, tissues and vitamins.

The announcement comes as it was today revealed that the UK has now suffered 7,095 deaths from the coronavirus, with over 60,000 confirmed cases.