Boris Johnson believes the European Union will cave in and offer a new Brexit deal at the eleventh hour because Ireland would be ‘f****d’ by a No Deal divorce, a Cabinet minister has claimed.

One Cabinet minister told The Sun: ‘The EU will give us a better deal, because if they don’t Ireland is f****d. No Deal will destroy it.

‘No deal hurts us, the EU and Ireland – but it hurts Ireland the most.

‘A lot of Irish trade goes to Britain, and much of the rest comes through us to Europe.’

The Cabinet minister also claimed Leo Varadkar, the Irish Taoiseach, had ‘overplayed his hand’ on Brexit and was now ‘in deep trouble’.

It came as a legal challenge brought forward by Remain-backing MPs designed to block Mr Johnson from being able to force through a No Deal Brexit by suspending Parliament was fast tracked with a substantive hearing to be held on September 6.

Meanwhile, Mr Johnson was given a major Brexit boost after a leading ally of Donald Trump claimed the US President was a ‘leaver before there were leavers’ and would ‘enthusiastically’ support the UK quitting the EU without a deal.

John Bolton, the US national security adviser who is in London for talks, said the UK will be ‘first in line’ for a trade deal with the US once it has split from Brussels.

Boris Johnson, pictured leaving Downing Street this morning, has said he will not agree to a Brexit deal which includes the Irish border backstop 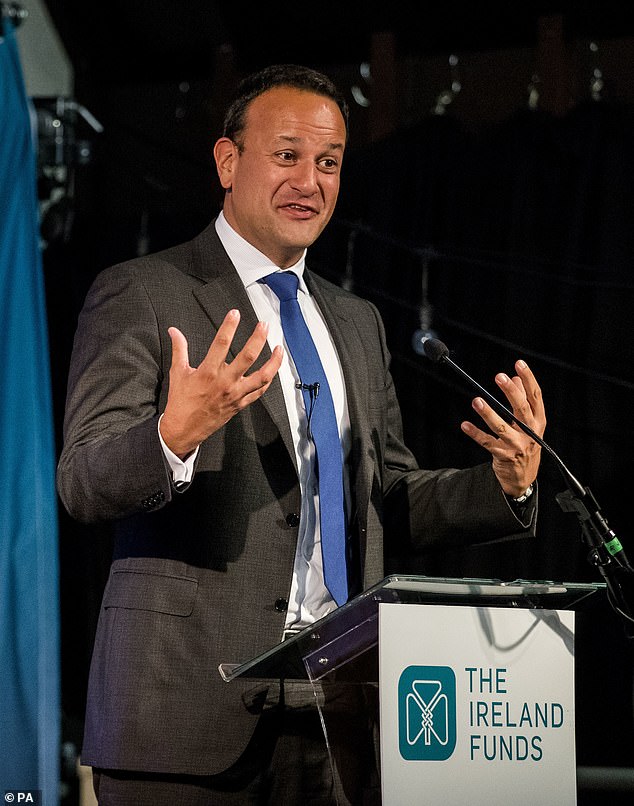 Leo Varadkar, the Irish Taoiseach (pictured on August 6 at an event in North Belfast), has invited Mr Johnson for talks in Dublin but has insisted the Withdrawal Agreement cannot be changed

Mr Johnson and Mr Varadkar are due to sit down for talks in September but Dublin has stressed that the backstop will not be up for renegotiation at the meeting.

The meeting will focus on the Brexit impasse and Northern Ireland issues but changes to the Withdrawal Agreement would not be countenanced by Mr Varadkar.

The backstop was included in Theresa May’s original Brexit deal as a last resort measure to be used in the event no overall trade deal has been struck by the two sides by the end of a transition period.

It would effectively see existing EU rules on customs kept in place to ensure frictionless trade on the island of Ireland could continue and prevent the return of a hard border.

But Brexiteers hate it because if implemented it would last indefinitely, restrict the UK’s ability to strike its own trade deal and getting out of it would require the agreement of both sides.

Mr Johnson has repeatedly labelled the protocol ‘anti-democratic’ since he won the keys to Downing Street last month.

Yesterday it emerged he is considering a whirlwind trip to Paris and Berlin in the next two weeks to outline his Brexit demands and concerns in person to Emmanuel Macron and Angela Merkel.

Such a diplomatic tour is being weighed up by Downing Street because it would help to avoid Brexit dominating a G7 summit set to be held in Biarritz, France, from August 24-26.

Mr Johnson has insisted formal Brexit talks can only begin once Brussels accepts that the existing Withdrawal Agreement must be radically overhauled and the Irish border backstop deleted.

Despite both sides refusing to budge, government sources believe there would be ‘nothing to be lost’ from Mr Johnson setting out his position to Mr Macron and Ms Merkel face to face.

Last week, Mr Varadkar said the invite to Mr Johnson to join him in Dublin for talks on Brexit and other issues had ‘no preconditions’.

A spokesman for the Taoiseach said on Sunday: ‘The Taoiseach has invited the British Prime Minister to Dublin for talks on Northern Ireland and Brexit.

‘Their offices are in contact to agree a date for these talks in the coming weeks.

‘Such a meeting would give both sides an opportunity to gain a better understanding of their respective positions.

‘As has repeatedly been made clear, the Withdrawal Agreement and the backstop are not up for negotiation.

‘Any discussions on changes to the Political Declaration would occur between the UK and the EU.’

The explosive No Deal comments from the Cabinet minister came as a judge today agreed to give the green light to a new Brexit legal challenge to be heard before October 31 – a decision which could prove to be a major headache for Mr Johnson.

A legal bid, backed by more than 70 MPs and peers, is seeking to persuade the Court of Session in Edinburgh to rule that proroguing Parliament and sending MPs home to stop them thwarting No Deal would be ‘unlawful and unconstitutional’.

This morning the court case was given the go ahead for a full hearing to take place on September 6.

Campaigners wanted proceedings to get underway as soon as possible because time is running out before the current Brexit Halloween deadline which is now only 79 days away.

An initial hearing took place this morning before Lord Doherty to determine the timescale of when the legal challenge will be heard in its totality. 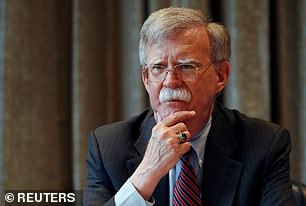 John Bolton, pictured in London yesterday, told journalists the US could pursue ‘sector-by-sector’ deals with Britain after Brexit

Employment has hit record highs in the UK as the market was boosted by higher numbers of working women and self-employed workers, new figures revealed today.

The number of people in employment rose by 115,000 to 32.81 million in the three months to June, reaching a new high for people in work, the Office for National Statistics said.

Chancellor of the Exchequer Sajid Javid said: I’m pleased to see 2.9 million more people are in work every day since 2010, wages are rising at their fastest in more than a decade, and people across the UK are taking home more of what they earn.

‘Thanks to the hard work of the British people and the government, we can further invest in our public services.

‘And today’s figures are another sign that despite the challenges across the global economy, the fundamentals of the British economy are strong as we prepare to leave the EU.’

The Prime Minister has not ruled out suspending parliament to make sure the UK can leave the EU without a deal if his attempts to renegotiate the existing terms of divorce fail.

Many Remain-backing MPs have vowed to do everything they can in the run up to Halloween to block No Deal.

However, Mr Johnson’s allies have previously said the new PM has no intention of pursuing prorogation, making the new legal challenge a waste of time.

Meanwhile, Mr Bolton gave Mr Johnson a big win as he said the UK will be ‘first in line’ for a trade deal with the US once Brexit has been delivered.

He urged British officials to ‘get Brexit done’ as soon as possible to allow Washington and London to start formally working on new mutually beneficial trading arrangements.

Speaking following a meeting with Prime Minister Boris Johnson yesterday he said the US could pursue quick ‘sector-by-sector’ trade deals with Britain after Brexit and focus on areas like manufacturing and car-making where the two countries may agree.

Work on more complicated areas like finance would be undertaken at a later date.

He said US trade negotiators believed such a sector-by-sector approach would be acceptable under World Trade Organisation rules.

The comments represent a major boost to Mr Johnson who has made resetting and improving relations with the White House one of his top priorities since taking office last month.

And in a sign that the new PM’s strategy is working, Mr Johnson and Mr Trump yesterday spoke to each other for the third time in less than three weeks ahead of their first face-to-face meeting at a G7 summit in France later this month.

Referring to comments made by Barack Obama ahead of the 2016 EU referendum, Mr Bolton said: ‘A prior American president said that if the United Kingdom left the European Union, it would go to the back of the queue on trade deals.

‘To be clear, in the Trump administration, Britain’s constantly at the front of the trade queue, or line as we say.’

Outlining his support for the UK leaving the EU, he added: ‘Both President Trump and I were leavers before there were leavers.’

Mr Bolton also lashed out at the EU as he claimed the bloc’s approach to democratic decisions it does not like is to try to ‘make the peasants vote again’.