Boris Johnson has ruled out cutting an electoral pact with Nigel Farage, despite warnings the two parties could split the Brexit vote.

The Prime Minister has been under pressure from Eurosceptic MPs to agree a non-aggression pact with the Brexit Party leader at the next general election.

Supporters of the idea, including Steve Baker, chairman of the powerful European Research Group of Tory MPs, argue that unless the Brexit Party is brought on board, the Conservatives cannot win the election.

A ComRes poll yesterday underlined the threat, suggesting that the Tories and Brexit Party would be almost neck and neck if an election is held after another Brexit extension.

The poll put the Conservatives on 22 points, with the Brexit Party on 20, Labour on 25 and the Liberal Democrats on 21.

But speaking to reporters on a flight to New York, Mr Johnson said the Tories would fight every seat at the election.

Told that Mr Farage had declared in a newspaper interview that he gets on well with Boris, the PM replied: ‘God’.

Boris Johnson, pictured in New York yesterday, said the Tories will stand candidates in every constituency across the UK at the next general election 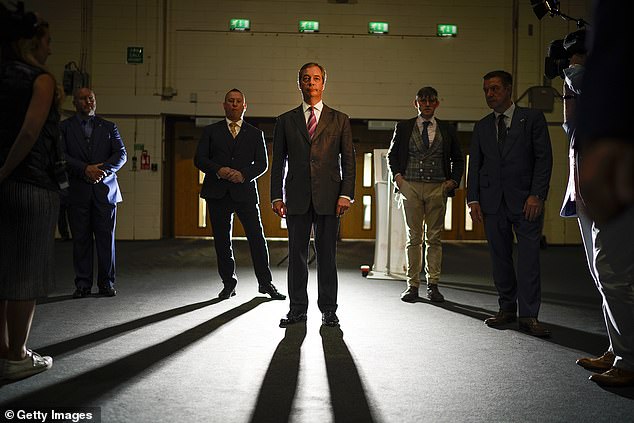 Nigel Farage, pictured on Sunday in Exeter, has repeatedly offered Mr Johnson an electoral pact but the PM has rebuffed the leader of the Brexit Party

He added: ‘I have personally good relations with all sorts of political opponents, which is one of the glories of British political culture.

‘But the Conservative Party is the oldest, most successful political party in the world, and we will be contesting the next election, when the opposition finally sum up the nerve to have an election, as Conservatives and not in an alliance or pact or coupon deal.’

Asked if that meant a Conservative candidate would be standing in every seat, the Tory leader replied ‘of course’.

Earlier this month a Downing Street source said Mr Farage was ‘not a fit and proper person’ and should not be allowed near government.

But Commons Leader Jacob Rees-Mogg has since tried to build bridges, saying Eurosceptics owe ‘a great debt’ to Mr Farage.

Many Brexiteer Tories fear that if the two parties do stand candidates against each other they will split the Eurosceptic vote and allow either the Labour Party or the Liberal Democrats to come through the middle to win in numerous seats.

Mr Farage has repeatedly offered Mr Johnson an alliance but only if the PM vows to deliver a so-called ‘clean break’ Brexit – effectively leaving the EU without a deal.

Mr Johnson has vowed to deliver Brexit by October 31 ‘do or die’ and with or without a deal but his preference is for Britain to split from Brussels with an agreement in place.