The 30-year-old was wrapped up warm as she headed out of her million-pound home to attend the Protest Against Japanese Whaling demonstration outside the Japanese Embassy on Saturday.

The former Foreign Minister condemned the practice as ‘brutal’ and ‘barbaric’ when it emerged Japan had withdrawn from the International Whaling Commission last month.

Ms Symonds was photographed with Mr Johnson’s father, Stanley, at the busy protest.

Carrie Symonds was photographed with the former Foreign Minister’s father, Stanley, at a protest against whaling in central London 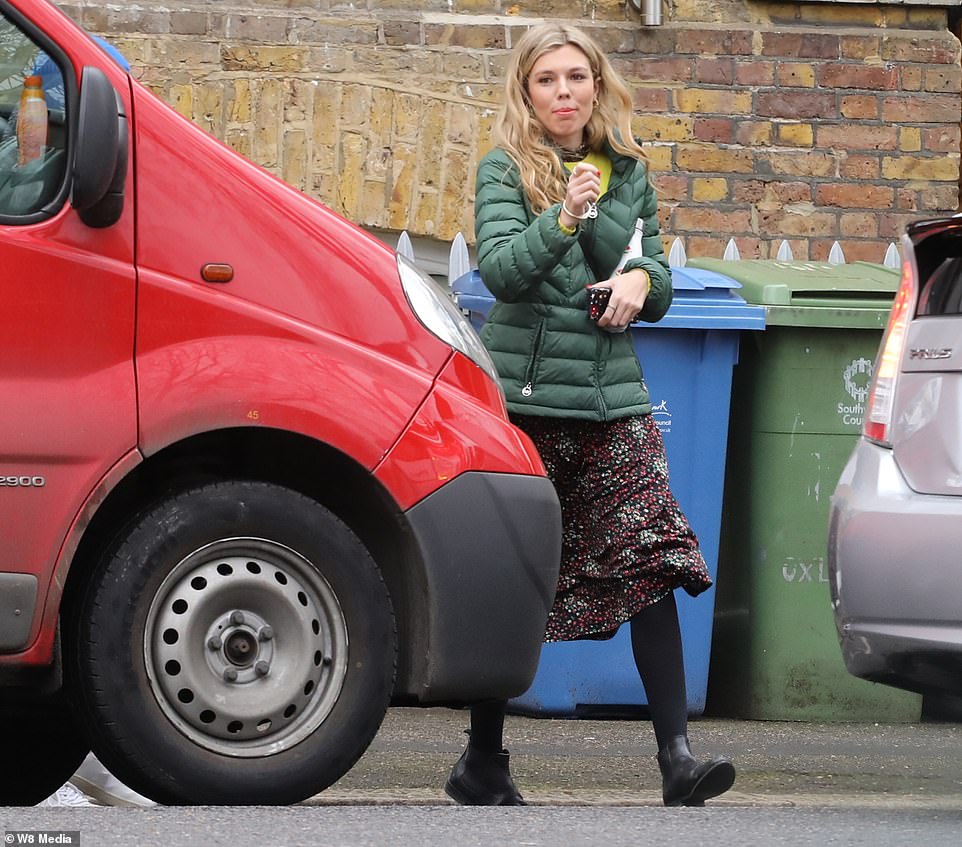 Carrie Symonds, 30, was wrapped up warm as she headed out of her million-pound home in London on Saturday morning 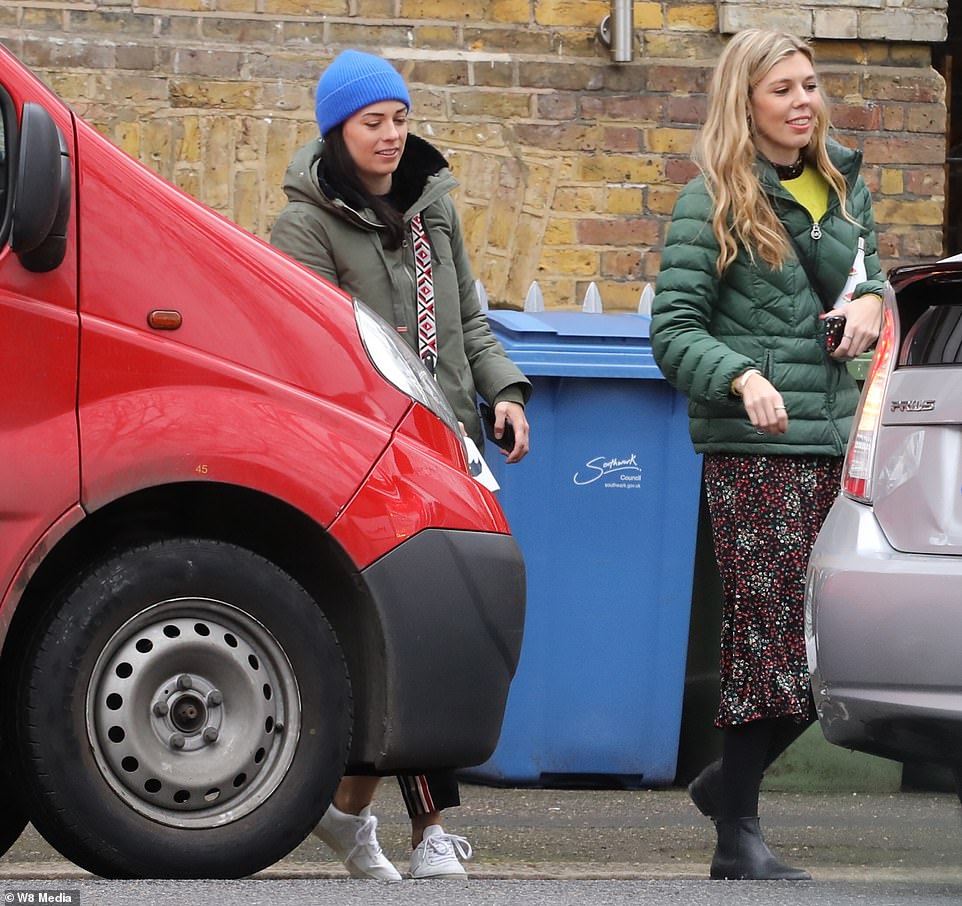 This is the first time the former Tory aide has been pictured with any of Mr Johnson’s family – and the photograph of the grinning pair is an indication she has been welcomed with open arms.

Ms Symonds was wearing an olive green puffer jacket as she left her house to head to the protest against Japan’s decision to begin whaling for profit in July.

Accompanied by a friend, the blonde walked towards a silver Prius outside her home. 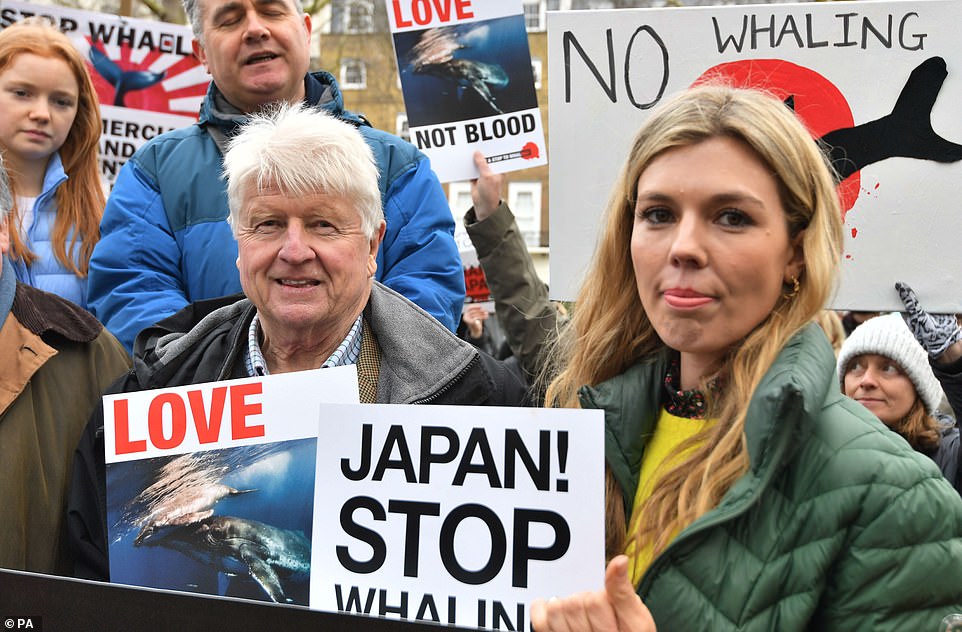 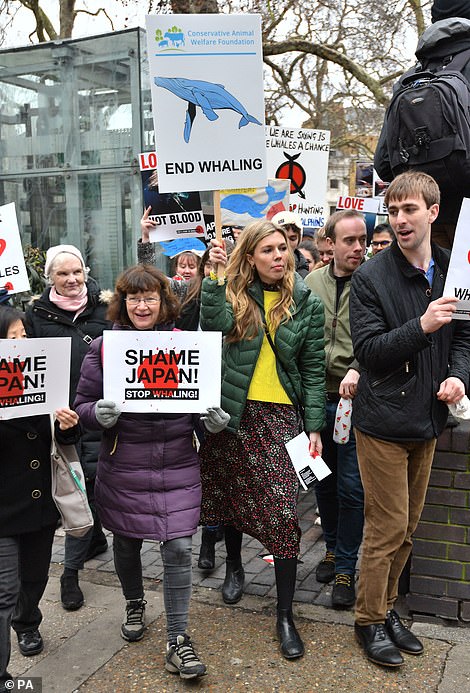 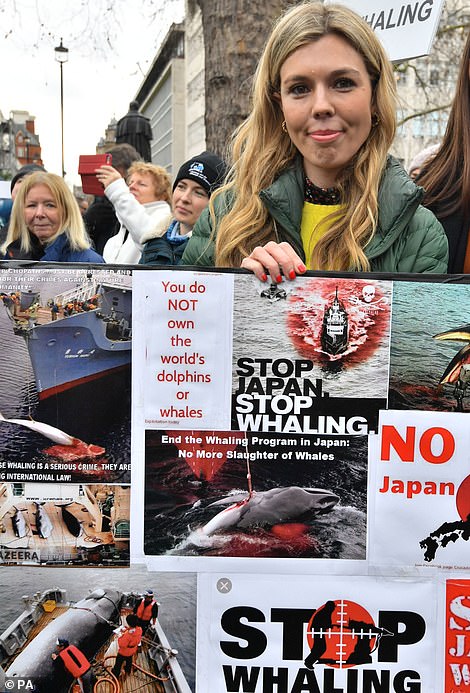 She was later photographed holding a Conservation Animal Welfare Foundation sign which read ‘END WHALING’ outside the Japanese Embassy in central London.

Ms Symonds  spoke to condemn whale hunts during the demonstration which began at 12pm.

She said: ‘I’ve heard all sorts of ridiculous reasons in an attempt to try and justify the hunt of whales.

‘The top one “it’s tradition”. The truth is there can be no good reason to resume commercial whaling. 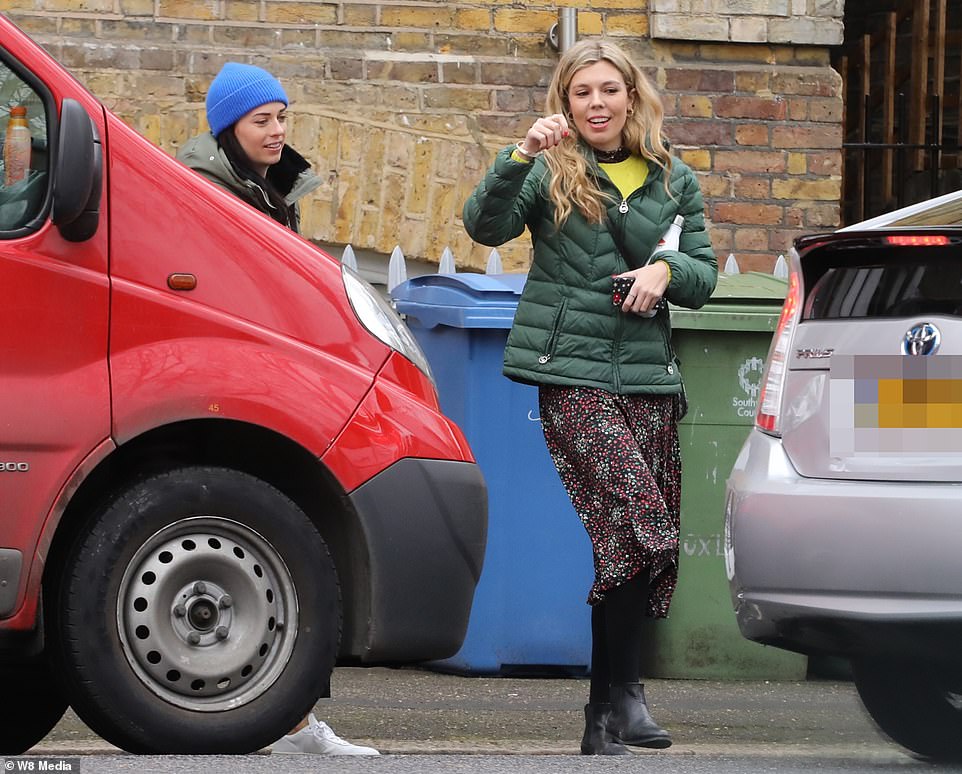 Accompanied by a friend, the blonde walked towards a silver Prius outside her London home on Saturday morning 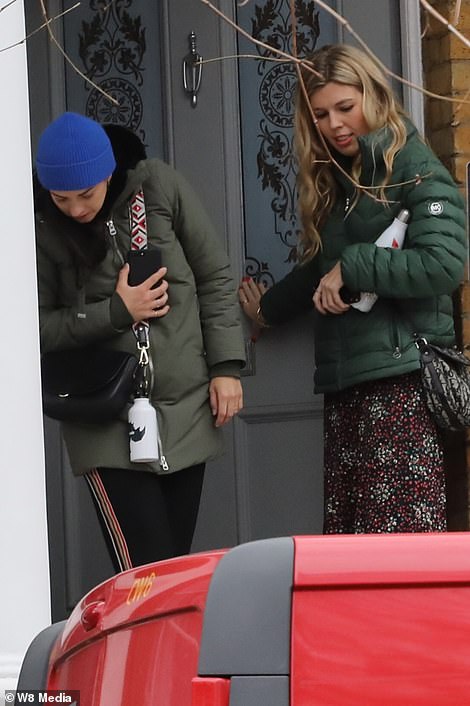 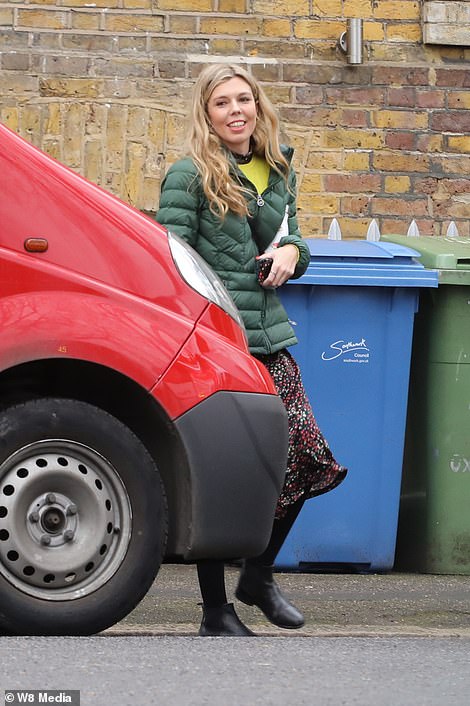 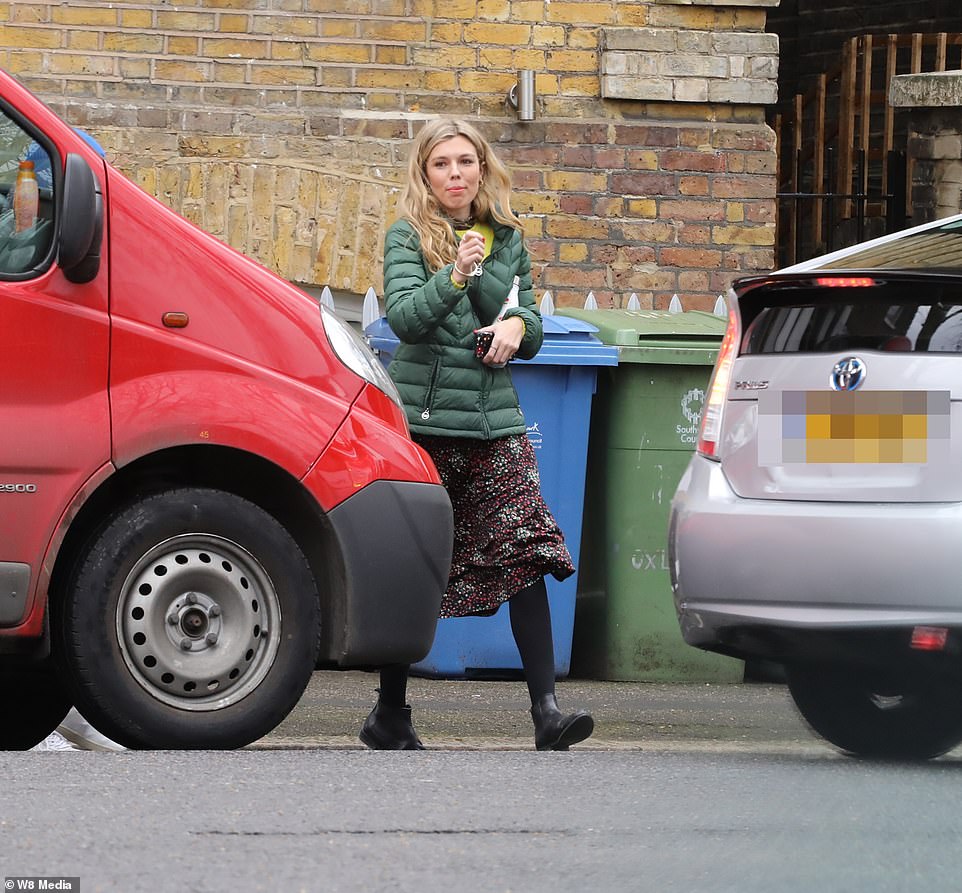 The blonde former Tory aide wore a floral dress, black tights and boots as she headed towards a silver Prius parked nearby 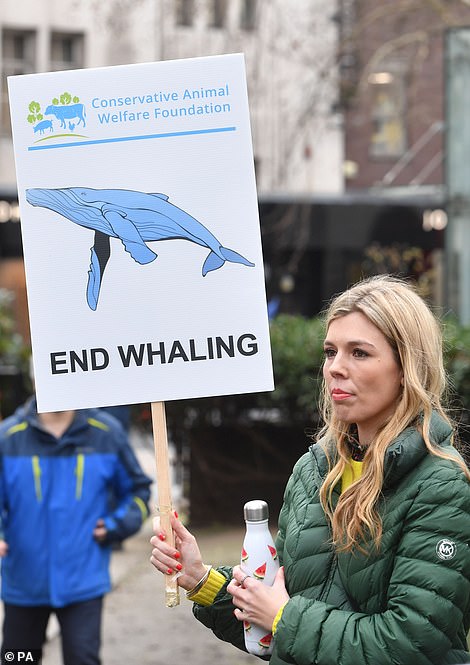 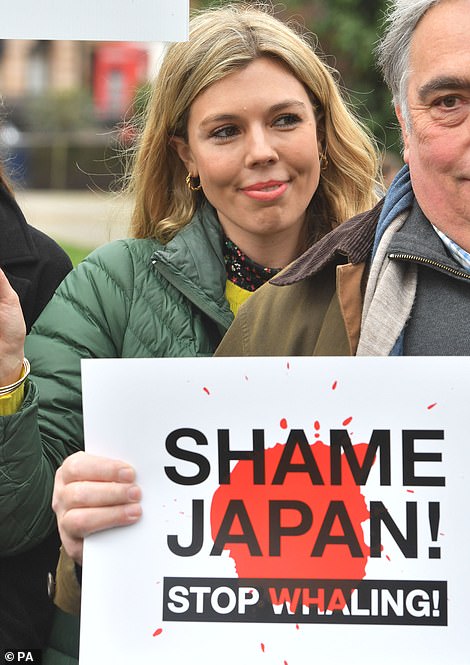 ‘We’ve all seen pictures of the sea turned red with blood. It’s cruel beyond belief’.

The ex-Tory aide had tweeted about her involvement in the event earlier in the week. She wrote: ‘Tomorrow is the big day: our march against Japanese whaling. Kicks off: 12pm @ Cavendish Square.

‘I will be there and speaking too. Do come and join. Let’s send a message and show we care.’

Ms Symonds and Mr Johnson were spotted together last week for the first time since the former Foreign Secretary announced his marriage had come to an end.

The pair had kept a low profile after Mr Johnson and his wife of 25 years, Marina Wheeler, announced they were divorcing last September.

But behind the scenes, their relationship has apparently been going from strength to strength. 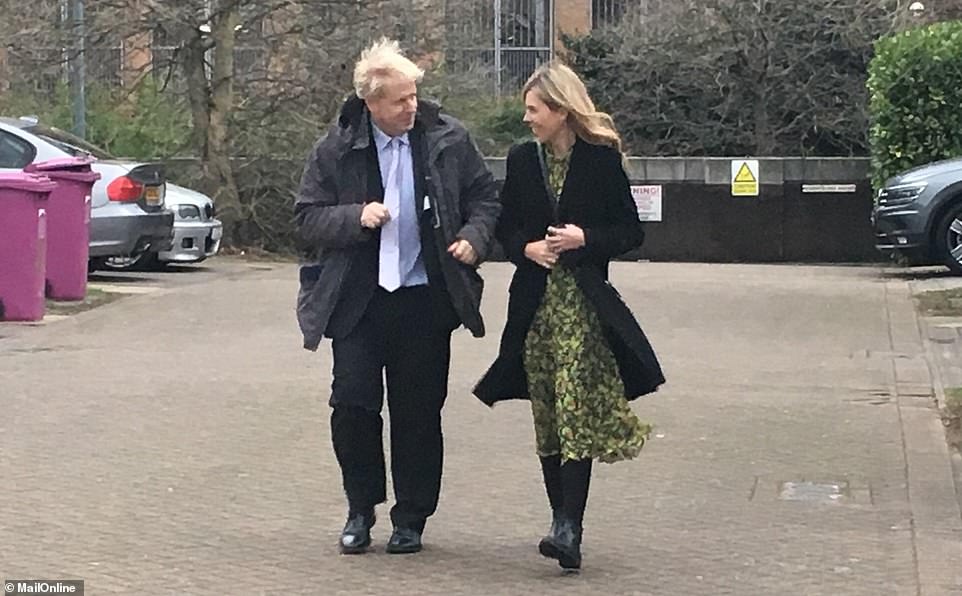 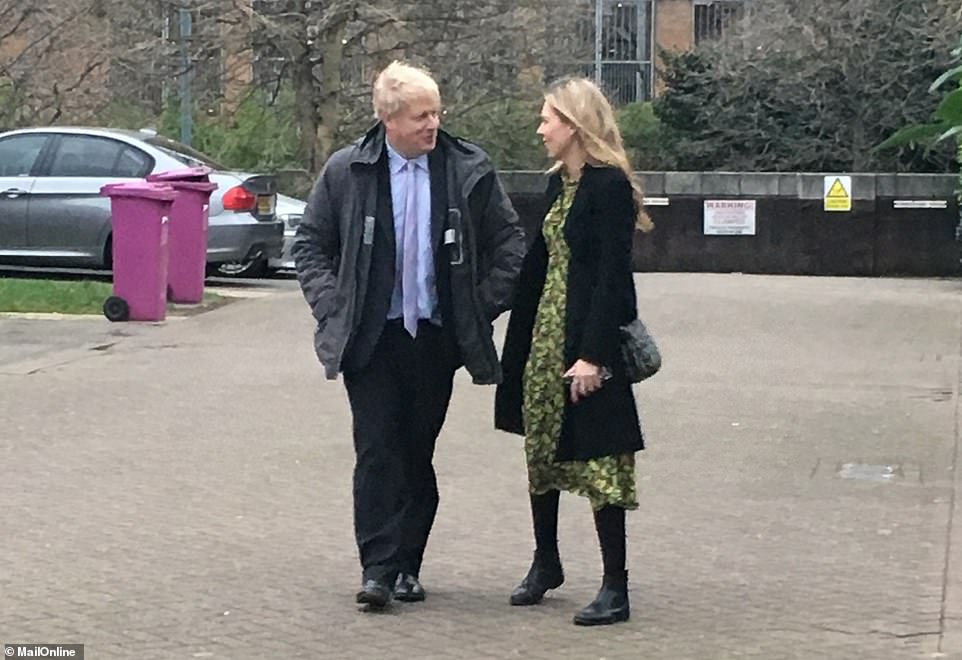 Mr Johnson – who owns a home in Oxfordshire – has been spotted in the mornings leaving his girlfriend’s South London flat.

She bought the property last year for a little over £650,000, with a mortgage.

The MP is said to ‘adore’ his partner and behave like a ‘puppy dog’ around her, and the pair are reportedly planning to ‘come out’ as a couple next month.

One source told the Sun: ‘Obviously they’ve tried to be discreet about their relationship, so Boris has been spending time in Carrie’s flat. 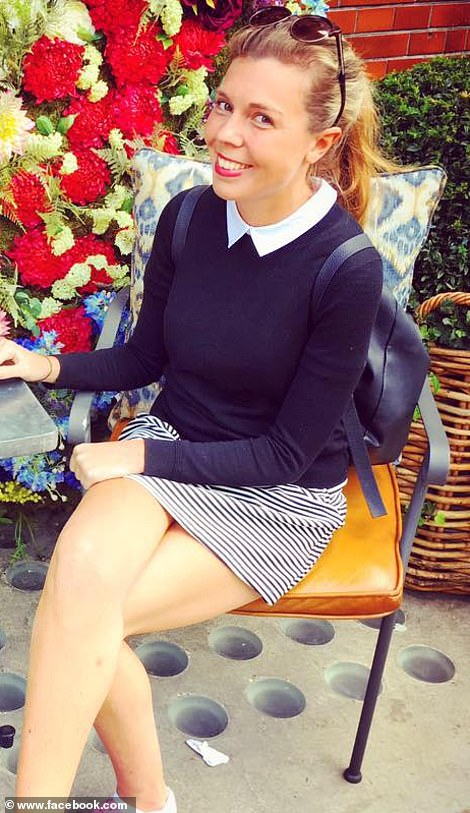 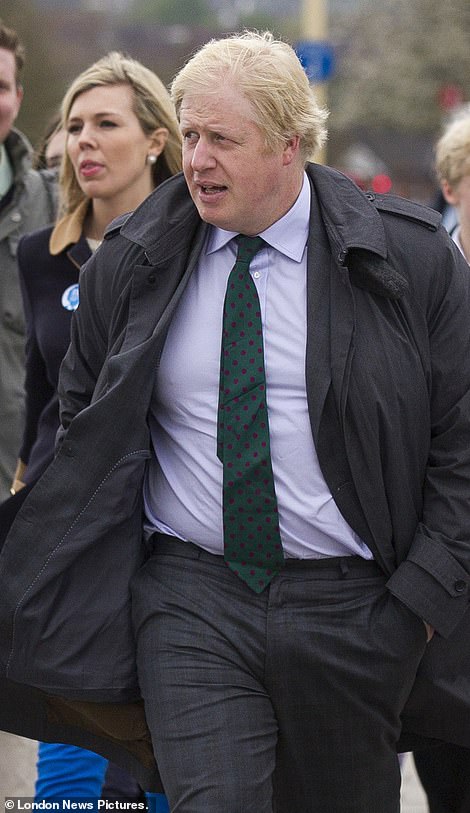 Mr Johnson, 54, has been dating former Tory spin doctor Carrie Symonds (pictured left), 30, since the summer. They are seen together right at the Boat Race in 2012

‘Neighbours regularly see him shuffling out, woolly hat wedged down over his face, tottering off on his trusty push bike.

‘The plan is to “come out” at an official Conservative party function towards the end of next month. Boris adores Carrie, and doesn’t want to keep it a secret for much longer.’

The source said Ms Symonds even has a photograph of the 54-year-old MP as the screensaver on her phone.

It is believed Mr Johnson has been dating the former Tory spin doctor, who is now an adviser to financial firm Bloomberg, since the summer.