A couple have been jailed for a total of 25 years for raping a woman they lured back to their flat with vodka and cocaine before threatening her with a knife and tearing off her clothes.

Yazmin Ali, 31, and Mohammed Hussain, 22, spotted their victim as she walked past a pub they were drinking at in Bradford city centre.

When their victim refused there was a ‘dramatic and dangerous escalation of events,’ recorder Simon Jackson said. 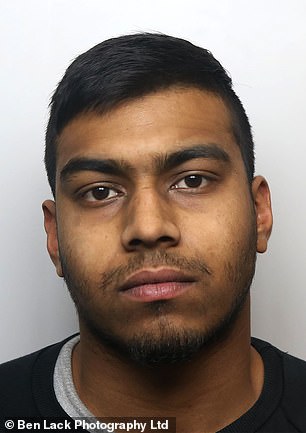 Prosecutor Ian Howard said the victim was walking along a street in Bradford city centre when she was beckoned into a pub by the two strangers.

Later that night, she was lured back to Ali’s flat with the promise of more vodka and cocaine.

Once inside, the couple had sex in front of her before Ali held a kitchen knife to her throat and Hussain ripped off her top and bra, then banged her head on the bedroom wall.

Hussain then raped her on the bed before the women got into a struggle and Ali bit her arm.

The woman grabbed her clothes and one of her shoes and fled. She was found crying and half naked by a cleaner who called the police.

When officers went to Ali’s flat, she was abusive and obstructive. She threatened them and hurled racist abuse at one officer.

At Bradford Crown Court, Ali was jailed for 13 years and Hussain for 12 years by Recorder Simon Jackson QC.

The pair, from Bradford, were also ordered to sign on the sex offenders’ register for life for the offences in July 2017.

They were convicted of the rape in January. Ali was also found guilty of assault by biting the woman and admitted racially aggravated harassment of the police officer.

Hussain had a previous conviction for kidnap and was on licence at the time.

In her victim personal statement, the woman said she was now ‘a bag of nerves’ and is afraid to go out.