The friend of Brett Kavanaugh named by his accuser Dr Christine Blasey Ford as being present during the alleged sexual assault at a high school party in 1980s has spoken out in the wake of the Senate Judiciary Committee hearing.

In a letter sent to the Committee he explained that he had chosen not to speak publicly as he has struggled with depression and anxiety while recovering from alcoholism and cancer.

However, he repeated his previous statement in an earlier letter that he ‘did not recall the events described by Dr. Ford and never saw Kavanaugh act in the manner described’.

New #Kavanaugh friend Mark Judge letter – obtained by FOX – on why he didn’t want to testify as a recovering alcoholic and cancer survivor, and says he never saw Judge Kavanaugh act in the manner Dr. Ford describes. pic.twitter.com/sLLqIDd7Fn

In her testimony yesterday, she spoke of how the alleged sexual assault at the party in ‘the Chevy Chase/Bethesda area’ in 1982 had haunted her for 35 years and left her suffering with anxiety and PTSD.

She claimed Kavanaugh and Judge had pushed her into a bedroom and locked the door, after which the former tried to rip her clothes off while they both laughed.

In his letter yesterday, obtained by Fox News, Judge writes: ‘I did not ask to be involved in this matter, nor did anyone ask me to be involved.

‘We have told the Committee that I do not want to comment about these events publicly.

‘As a recovering alcoholic and a cancer survivor, I have struggled with depression and anxiety. As a result, I avoid public speaking. 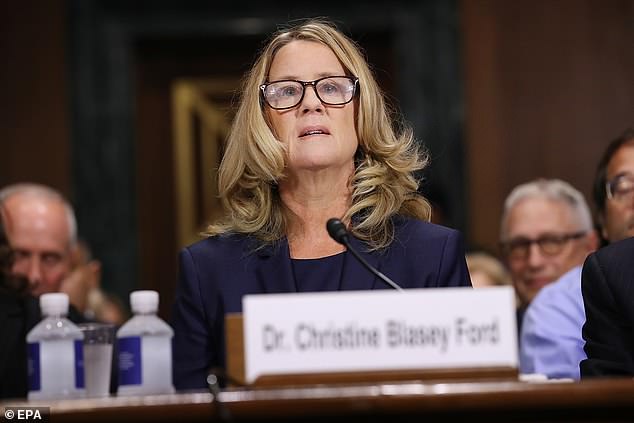 Allegations: Mark Judge was named by Dr Ford as being present during the alleged sexual assault she claims Kavanaugh committed at a high school party in 1982

‘Brett Kavanaugh and I were friends in high school, but we have not spoken directly in several years.

‘I do not recall the events described by Dr. Ford in her testimony before the US Senate Judiciary Committee today. I never saw Brett act in the manner Dr. Ford describes.’

Over much of his adult life, Judge has dived back repeatedly into his memories of Georgetown Preparatory School student life in the early 1980s, and his two memoirs and a cluster of internet essays provide cautionary takes on his prep school days and boozy weekend rounds as a teenage drinker.

Judge’s book ‘Wasted: Tales of a GenX Drunk’ surveyed his alcohol-fueled escapades in high school and college, a time of ‘drinking and smoking and hooking up,’ he wrote in a 2015 essay on the Acculturated website. 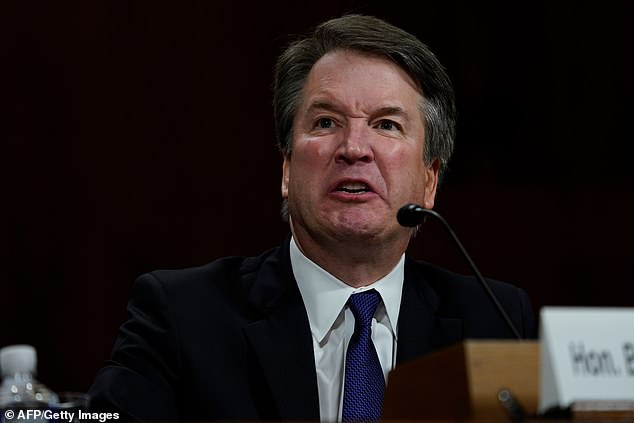 Judge said in his letter that while he had been friends with Kavanaugh in high school, they had not spoken for years

Kavanaugh and Judge’s contemporaries have described the pair as close friends, and some have pointed out that the latter was a cruel bully – but that the SCOTUS nominee was not.

Democrat Maryland state Sen. Richard Madaleno, who was in Georgetown Prep’s 1983 graduating class with Kavanaugh and Judge, sharply remembers Judge as ‘nasty to other people.’

‘He was an unhappy person who dealt with his own demons by making other people unhappy,’ Madaleno said, ‘especially those of us who he perceived to be on a lower rung of the high school ladder.’

Although Kavanaugh and Judge played on the school’s football team and partied together, Madaleno did not remember the future judge the same way. ‘There’s no guilt by association,’ he said.

Two other Georgetown Prep classmates elaborated on Judge’s ‘bully’ persona at the time: Quick-witted and adroit with insults, he taunted kids with weight problems or foreign names. He dismissed many of those outside of his circle as ‘losers.’ He questioned the sexuality of members of the school’s swim team. He sometimes openly mocked teachers and priests.

‘He had a way of being funny at other peoples’ expense,’ one former classmate said. ‘You’d want to be on his good side so that you weren’t his target.’