A bin man who stockpiled 250 explosive devices and military supplies in his family home as he believed a ‘period of war and famine was coming’ has been jailed for three years and four months.

Reeco Fernandez, 29, stashed the IEDs and supplies – including arrow heads, army-style rucksacks and ration packs – in a cupboard under the stairs, a garden shed at his bedroom at his parents’ terraced home in Bedminster, Bristol.

His cache, including modified fireworks, ball bearings and chemicals to make further explosives, was discovered after emergency services were called to the property at 7pm on September 8 last year.

Neighbours dialled 999 after hearing bangs, a loud boom and seeing smoke billowing from the house – caused after Fernandez unwittingly blew himself up in his bedroom.

Reeco Fernandez, 29, hoarded improvised explosive devices in the home he shared with his mother and father

A critical incident was declared after firefighters entered the three-bedroom property and saw the devices, with 80 neighbours evacuated for five days while experts including explosive ordnance disposal teams investigated.

Avon and Somerset Police found Fernandez had been buying chemicals online for several years before the blast, with footage from his mobile phone detailing experiments he carried out on explosives in woods close to his home.

Fernandez, who suffered 22% burns in the explosion and remained in hospital for 18 days, admitted five counts of possessing an explosive substance for an unlawful purpose at Bristol Crown Court on Friday.

Mr Justice Dingemans, jailing Fernandez for three years and four months, said the defendant was not ‘associated with a terrorist organisation’ but had put himself, his family and his neighbours at risk of ‘real harm’. 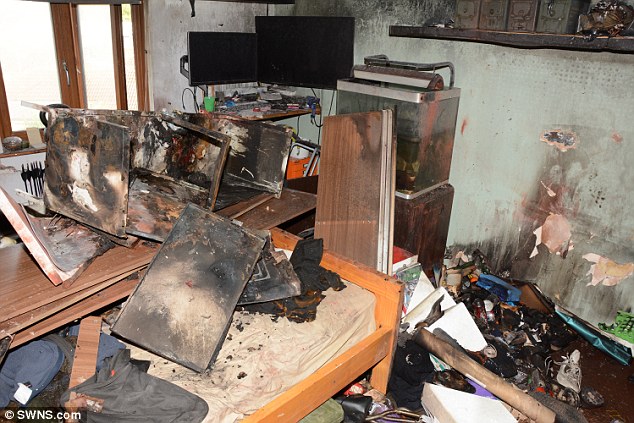 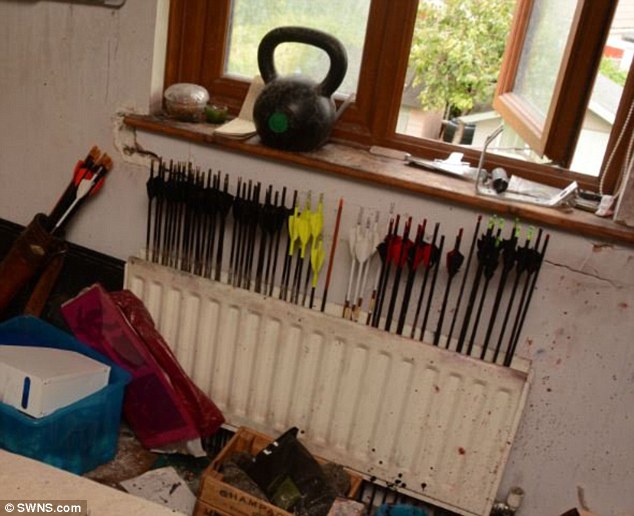 The judge said the incident had been ‘immensely frightening’ for those close to the house at the time of the explosion, including children who were playing in nearby gardens.

‘The only person injured was you, you suffered burns as you attempted to put out the flames,’ the judge told Fernandez.

‘It is apparent that you had, in a number of the IEDS, put in articles such as arrow heads and ball bearings.

‘It is also apparent from the mobile phone footage that has been shown in court that you had started to experiment in a wooded area about half a mile from your house with a number of explosive attempts.

‘Some of them ignited successfully, some of them didn’t. You were taking no safety precautions for yourself. You made a deliberate decision to mix and store explosives.

‘The explosion was an immensely misguided act which exposed yourself and others who you loved, and your neighbours to real harm.’ 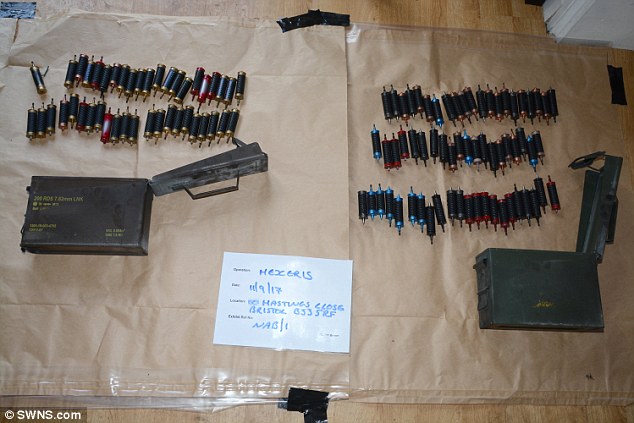 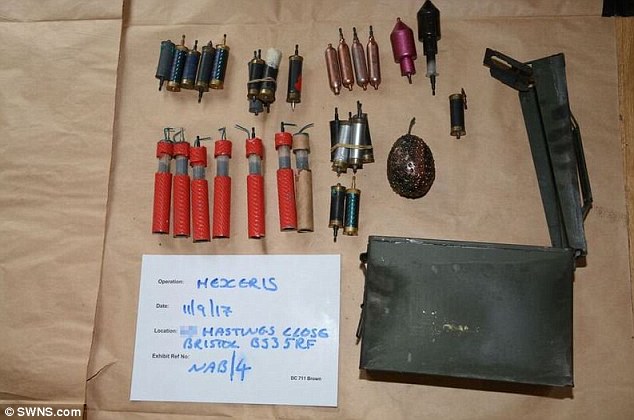 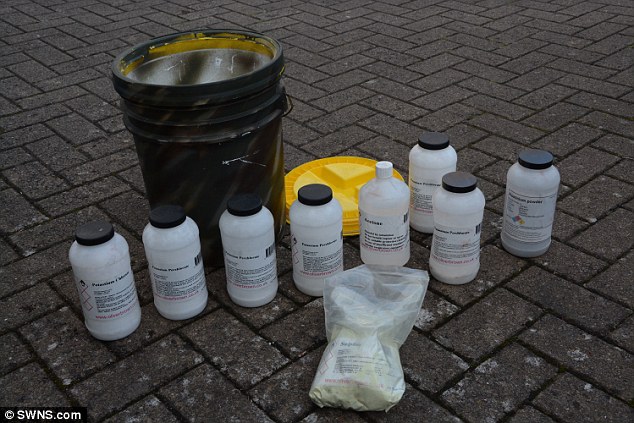 Mr Justice Dingemans ruled that Fernandez did not pass the threshold for dangerousness, which would have seen him jailed indefinitely.

Prosecuting, Rachel Drake said the explosion appeared to have been caused on a metal cabinet in which Fernandez kept some of his explosives.

There were 10 commercial containers of material and 21 suspected chemical mixtures, fireworks and pyrotechnics. 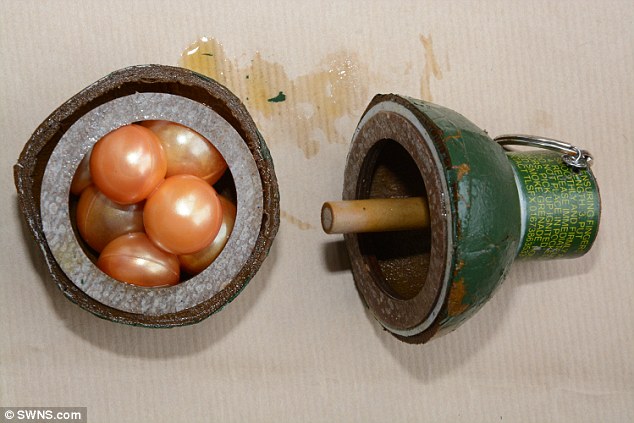 Police uncovered a smoke grenade when they searched the 29-year-old’s home. When officers arrived  Fernandez provided no information other than mentioning a firework had exploded – he had suffered 22 per cent burns 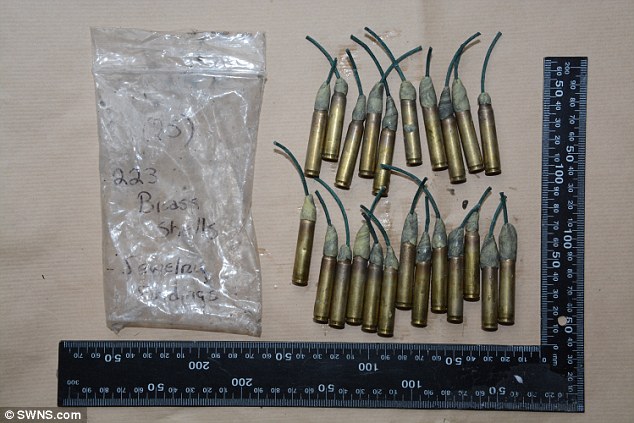 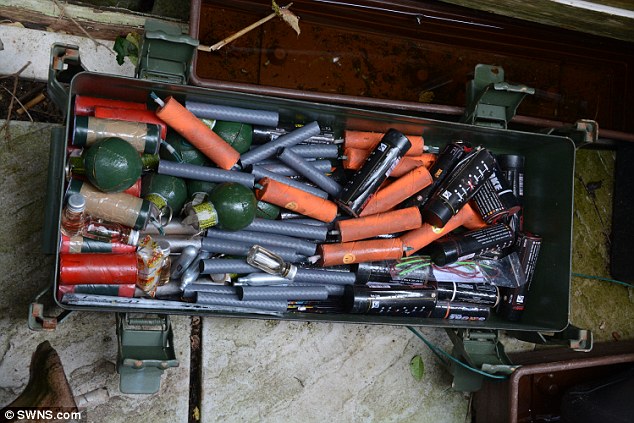 Other material in the property included chemicals, paper tubes, empty grenades, ball bearings, dismantled fireworks, cooking trays, scales, and a pestle and mortar with chemical residue in it.

Fernandez replied ‘no comment’ when he was questioned by police following his release from hospital.

‘No links to any kind of terrorist organisation or suggestion of any kind of malevolent intention were found in relation to these materials,’ Ms Drake said.

Footage recovered from Fernandez’s mobile phone by police showed him experimenting with explosives in woodland in June 2016 and August 2017.

Clips played to the court began with the bin man reciting the list of ingredients before lighting the devices and running away from them.

A whiteboard and notebook found in his bedroom appeared to feature content ‘related to the manufacture of IEDs’, the prosecutor added.

‘In the notebook, there were recipes and diagrams of IEDS,’ she said. 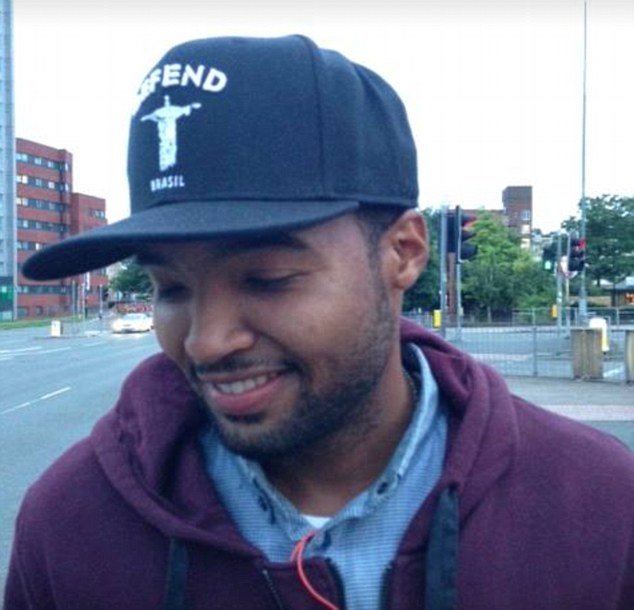 Fernandez has spent six months in prison, where the court has been told he has tried to make the best of it and participated in an arts workshop

‘The volume of material is significant. They were stored in the garden shed, under the stairs and in the defendant’s bedroom. They demonstrate a committed interest in explosives.’

Representing Fernandez, Mary Cowe said a psychiatrist found he had ‘eccentric beliefs about what the future holds’.

‘He talks about being told in 2013 that a period of war and famine was coming and he could do something about it,’ she said.

‘The defendant didn’t realise just how dangerous what he was doing was. He has an entirely misplaced idea of his expertise. He thought by storing them in his metal cabinet, he would mitigate the risk.’

Ms Cowe said Fernandez had attempted to commission a woman to sew him a bullet-proof vest from his own design, which he planned to test out with the explosives and then provide to British forces.

‘He thought he was going to help people by researching this vest,’ she said.

She added that the family of Fernandez, who dreamed of joining the Royal Navy, were supporting him.

Caroline Peter, assistant chief constable of Avon and Somerset Police, said: ‘Reeco Fernandez is someone who is interested in impending world disasters and had, for some time, been making his own preparations for a major event.’

She added that his family were aware of his ‘interests’, but simply viewed them as a hobby.