Britain’s worst rapist could spend the rest of his life in prison after the Crown Prosecution Service today asked the Attorney General to consider increasing his sentence to a whole life tariff.

Reynhard Sinaga, 36, was locked up for a minimum of 30 years last week after being convicted of carrying out 159 sex attacks on 48 different men after tricking them into taking a date rape drug.

Now the Crown Prosecution Service (CPS) has written to Geoffrey Cox QC to ask him to consider the rare punishment – which has only been handed out to around 75 living British criminals, who are all murderers.

Reynhard Sinaga, 36, was locked up for a minimum of 30 years last week after being convicted of carrying out 159 sex attacks on 48 different men after drugging them

If Mr Cox believes Sinaga should be considered for a whole life tariff, he can refer his case to the Court of Appeal to be looked at again.

The judge at his trial, Suzanne Goddard QC, told the rapist she had considered giving him the full-life term but found the case to be ‘borderline’.

Currently Sinaga would be eligible for parole after serving a minimum of 30 years behind bars.

If he was given a whole-life tariff he would be the first rapist to serve the sentence.

A CPS spokesman said: ‘The case of Reynhard Sinaga is unprecedented in CPS history and we took a range of factors into account when bringing each trial to court.

‘A key consideration was the likely impact on sentence of bringing further prosecutions and we are confident we did everything we could to ensure the court had adequate sentencing powers to see justice done in this case.’

Sinaga, who mostly targeted heterosexual students in Manchester, was convicted of 159 attacks, including 136 rapes, eight attempted rapes and 15 indecent assaults against 48 victims. Four trials were held over 18 months.

Footage was found of him assaulting up to 195 different men, 70 of whom have not been traced.

‘He would almost certainly be the most prolific sex offender to have gone through the British courts and quite possibly any court in the world,’ said Ian Rushton, North West deputy chief crown prosecutor.

The videos of the attacks Sinaga was charged with are believed to date from 2015 to 2017 and Sinaga arrived in Britain in 2007.

A source said: ‘What he did in the intervening years is unknown and it is possible there are many more victims.’ 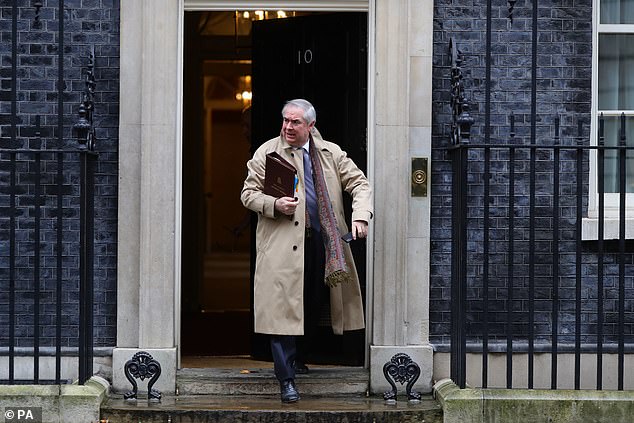 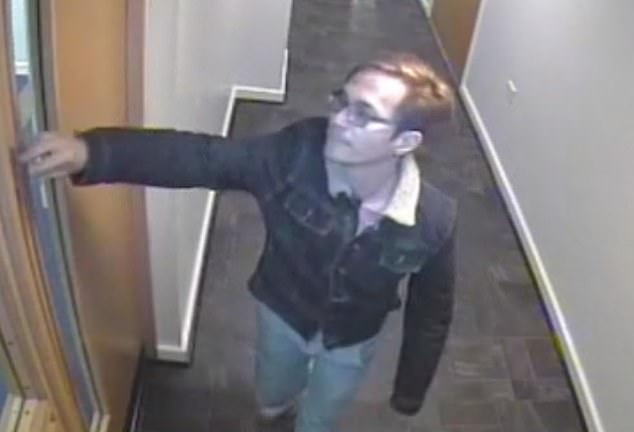 Indonesian-born Sinaga was already serving a minimum of 20 years after being found guilty at trials in July 2018 and May 2019. Trials in October and December saw further convictions.

He posed as a ‘Good Samaritan’ to men who had become separated from their friends on nights out in central Manchester.

The slightly-built sex attacker, who described himself in court as an effeminate gay man, would strike up conversation and invite them to his nearby flat.

His victims ranged from 18 to 36 but the average age was 21, Manchester Crown Court was told.

Most were students and some were still at school, including the sixth former whose escape from his vile clutches led to Sinaga being arrested.

She added: ‘I’m not aware of any other case of sexual offending on this scale and magnitude. This was a campaign of rape which, in my judgement, justifies the highest of sentences. 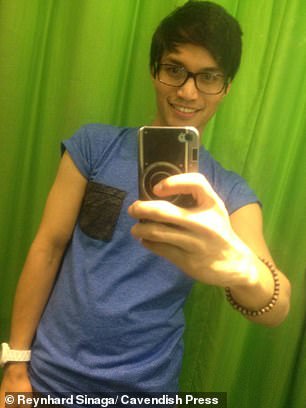 Sinaga (above) would prey on victims aged 18-36

‘One of your victims described you as a monster. The scale and enormity of your offending establishes that is an accurate description.’ She called Sinaga a ‘highly dangerous, cunning and deceitful individual who will never be safe to release’ – also pointing out that he could have killed or seriously injured his victims by spiking their drinks.

Sinaga, who came to Manchester as a student funded by his wealthy Indonesian family, boasted to friends about using ‘black magic potion’ and ‘secret poison’ to have sex with straight men.

He denied all the offences, claiming his victims had agreed to play dead during sex in a 50 Shades of Grey fantasy.

Sinaga had two degrees from Manchester University and was taking a PhD in geography at Leeds University at the time of his arrest in June 2017. Although raised a Catholic, he attended a liberal Anglican church close to his flat.

The court heard that Sinaga’s victims had suffered ‘deep and lasting psychological harm’. Two of the men attempted suicide, while others told how the trauma of what happened had ruined their lives and forced them to take to drink.

He added: ‘They wait for brave victims to come forward. They don’t look for patterns, join the dots or assume the worst.

‘It’s better that we presume that predators exist in every environment and go looking for them.’

Greater Manchester Police urged other potential victims of Sinaga or anyone requiring support to come forward.

‘He’s still my baby’: Mother of world’s worst rapist Reynhard Sinaga reveals she desperately tried to get him to return from the UK to his devout family in Indonesia before he carried out sex attacks on 195 men 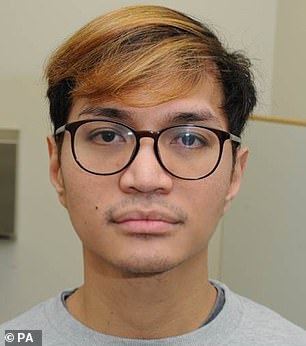 The mother of prolific rapist Reynhard Sinaga has said she desperately urged him to return to his devout Christian family in Indonesia.

Sinaga, 36, is believed to have attacked at least 195 men and was convicted of drugging 48 of them and filming himself sexually violating them while they were unconscious in his Manchester flat.

The gay Christian student was jailed for 60 years and must serve a minimum of 30 years in custody before he can be considered for parole.

Sinaga’s mother, Normawati, from Depok, a city within the Jakarta metropolitan area in Indonesia, still struggles to believe her son was capable of such evil crimes, in an interview with The Sunday Times.

‘We are a good Christian family who do not believe in homosexuality. He is my baby,’ she said. 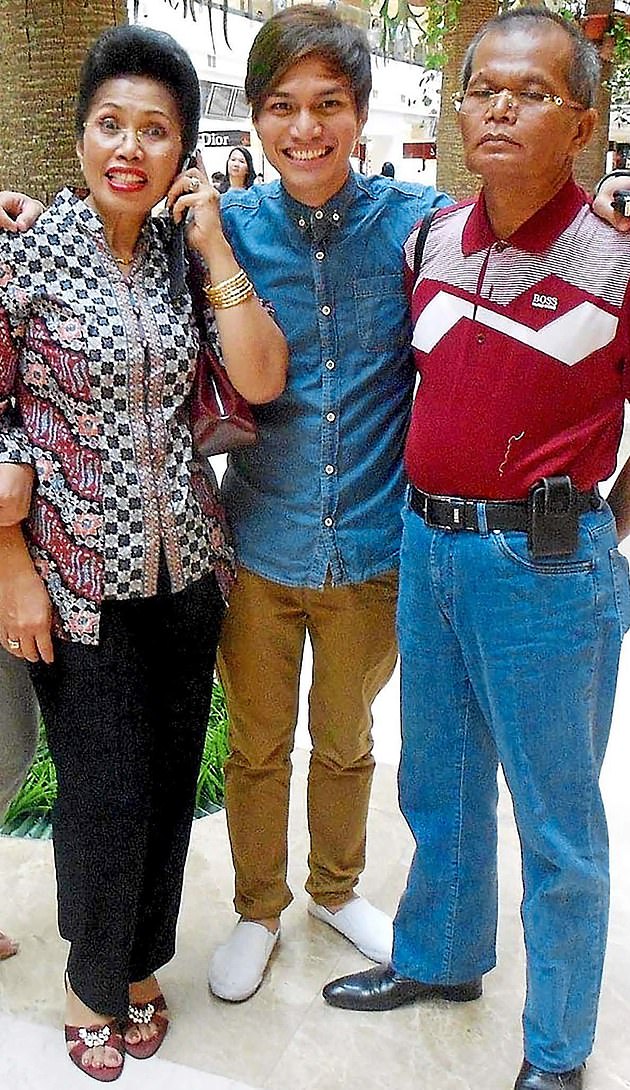 Sinaga’s mother, Normawati (left), from Depok, a city within the Jakarta metropolitan area in Indonesia, still struggles to believe her son, Reynhard Sinaga, was capable of such evil crimes. Also pictured is his father, Saibun

Normawati told how her son, a former Leeds University postgraduate student and eldest of four, was a ‘gentle boy’ who had a passion for reading.

She described how her son had a privileged upbringing, funded by the family’s company of palm oil plantation and refinery, and would accompany her to church every Sunday morning.

‘He didn’t really go out much. He was more interested in studying,’ she said.

Normawati revealed how her son could play the piano ‘pretty well’ and added: ‘He was a quiet boy. He didn’t really enjoy performing in the church. But I made him do it.’ 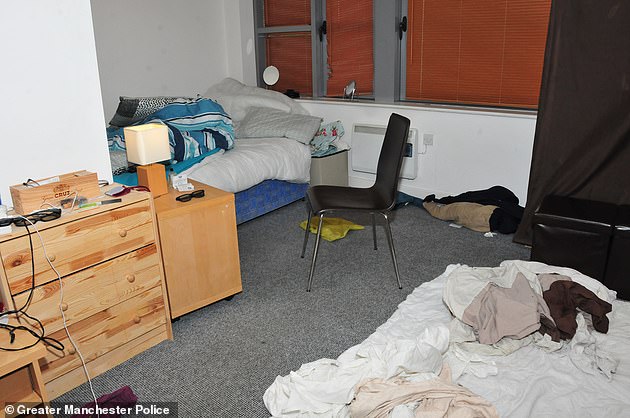 Sinaga arrived in the UK on a student visa in 2007 financed by his parents and remained in the country on those terms for the next 10 years.

He chose to live close to the gay village and the Canal Street area of Manchester where attitudes to homosexuality were very different than in his home nation of Indonesia.

Sinaga is said to have had a small, close-knit group of friends who believed him to be friendly and good-natured.

He graduated from the University of Manchester in 2009 with an MSc degree in Planning and again in 2011 with an MA degree in Sociology.

No concerns of a sexual nature, or of any other matters, were ever raised with the university, confirmed officials. 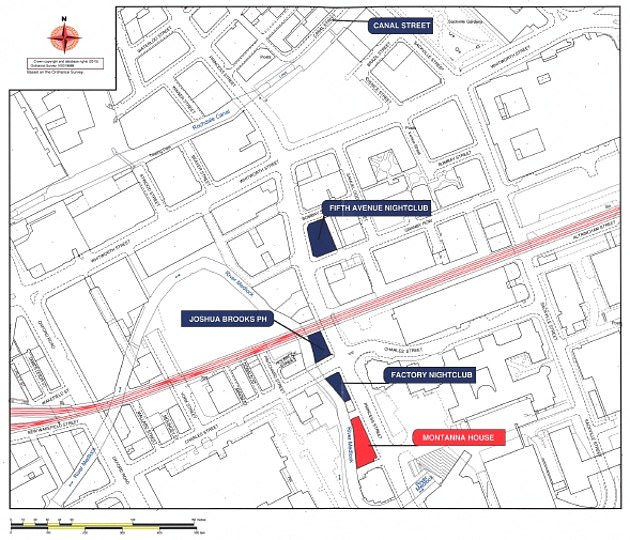 A map of Manchester city centre shows where Sinaga’s flat (in red) is located along with the nightclubs Factory and Fifth Avenue, which many of the complainants had earlier been to

From 2012 he commuted monthly to the University of Leeds as part of his studies for a PhD.

His mother repeatedly begged her son to return home to help run the family business because her husband was growing old.

Yet Sinaga, who aimed of becoming a lecturer, refused his mother’s pleas and said he ‘felt comfortable living in Manchester’.

Despite Sinaga not saying so, one factor is likely to have been Indonesia’s attitude to homosexuality.

In 2014 the northern province of Aceh passed a law to punish anyone having gay sex with 100 lashes.

The university said he did not appear to spend much time in the city, other than for the monthly supervision sessions, and did not take an active part in research groups or societies.

Her son was finally caught in June 2017 when an 18-year-old victim, who he had met outside Factory nightclub, had regained consciousness during his attack. 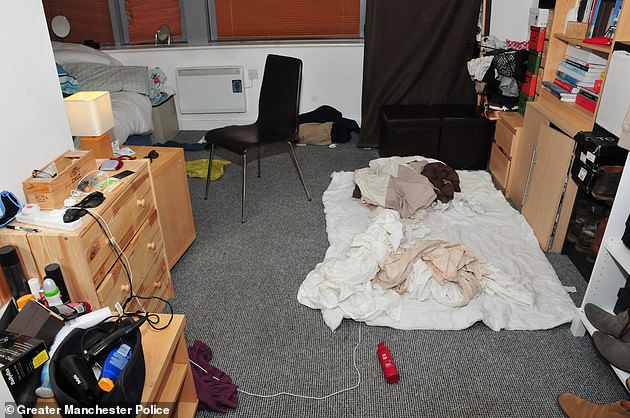 A large part of Sinaga’s offending took place in the bedroom but some did take place in the living room. The final victim was raped in the bathroom before he woke up during the ordeal 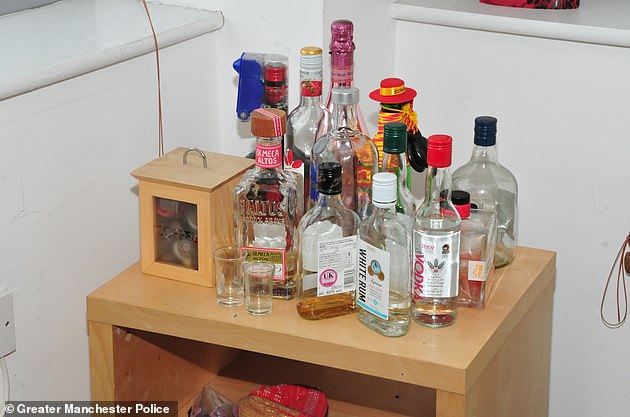 Spirit bottles at Sinaga’s flat are pictured. He is thought to have drugged the men when giving them a drink from his selection of alcohol

The six-foot tall, 13-stone teenager, told the court how he woke up with his trousers around his ankles with Sinaga molesting him.

He battered the rapist, beating him so badly he suffered a bleed on the brain and had to be taken to hospital.

Initially the victim was mistakenly arrested on suspicion of grievous bodily harm, but Sinaga left an iPhone 4 in his back pocket which contained sickening videos of him raping drugged men.

Greater Manchester Police called Normawati to tell her that her son had been arrested for a ‘serious crime’ and was in hospital.

Upon visiting her son in hospital she described seeing bruises covering his face, neck and parts of his body.

Normawati expressed her anger at the time of seeing her son in such a state despite an Indonesian diplomat telling her that Sinaga was accused of rape.

‘Imagine a small Indonesian man being beaten up by a big, tall westerner,’ she said. ‘I wondered if the other person had made up the story.’

She said her son was ‘not the type of boy’ who liked to fight and was never involved in fights as a child.