British transgender soldier and husband would love to have children

The country’s highest-ranking transgender soldier has praised the British Army as ‘fantastic’ as she and her partner announced their hopes of having children.

Hannah spent the first few years of her time in the army as a man before deciding to undergo a sex-change operation while on a tour of Afghanistan six years ago.

She has now praised the army and her fellow soldiers for supporting her through the transition.

Appearing on Good Morning Britain, Jake spoke of the couple’s hopes of having children, having tied the knot on Friday 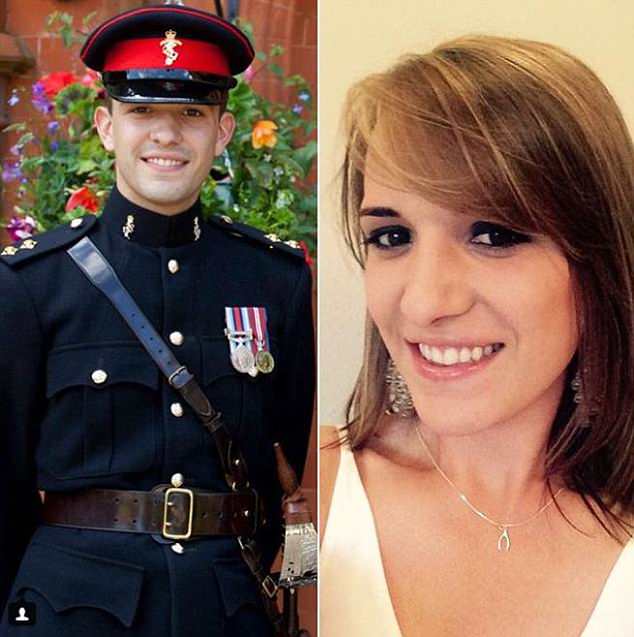 Captain Winterbourne (left, before, and right, after her transition) spent her first years in the Army as a man before she spoke about her decision to transition while still on active duty

‘The British Army have been fantastic,’ she said. ‘The army just really gets it.

‘You don’t care whether they’re transgender, gay black or Muslim. It doesn’t matter at all because we focus on our job and our output.

‘All my peers were supportive and made sure I was happy and could keep doing my job.’

Appearing on Good Morning Britain, Jake spoke of the couple’s hopes of having children, having tied the knot on Friday.

Jake, who starred alongside Eddie Redmayne in Hollywood film The Danish Girl, began transitioning in his mid-twenties having endured a hellish childhood. 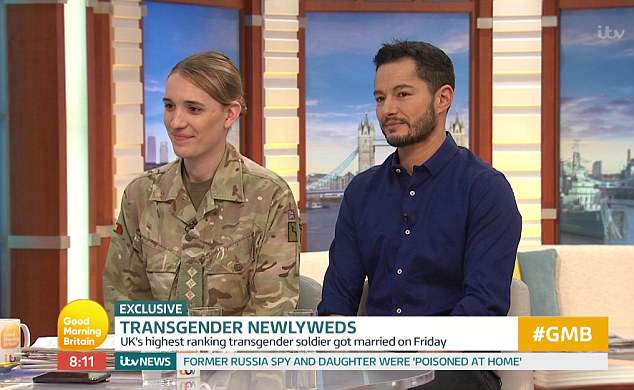 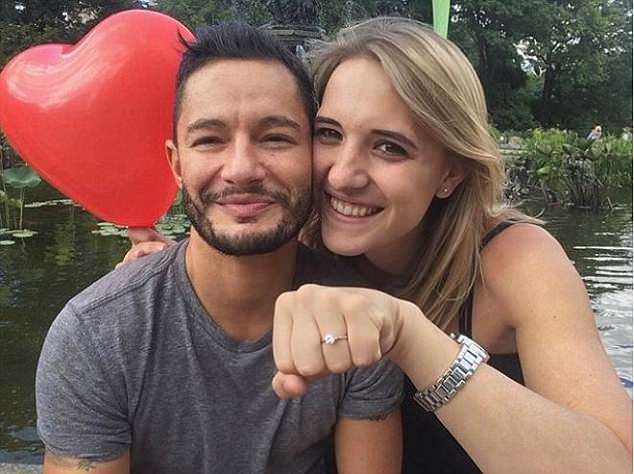 Captain Hannah Winterbourne (right) has married actor Jake Graf (right) – who was born a woman. Pictured, the pair after getting engaged in New York’s Central Park 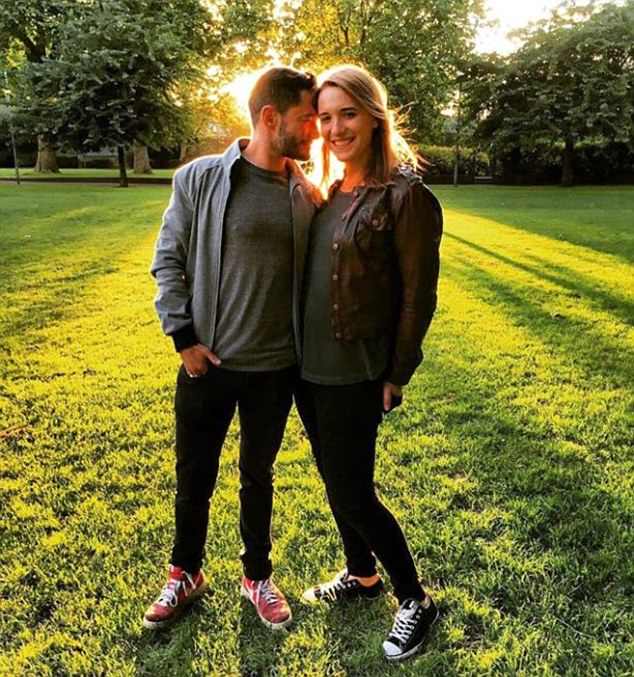 He said: ‘I’ve worked as a manny for the last 20-odd years. So I’ve looked after other people’s children but it’s come to the point where I’d like to have my own.

‘Hannah is amazing with children and we regularly look after our niece and nephew.

‘For us, kids is a definite. Whether that is through surrogacy or adoption, we hope it can happen soon.’

The couple also spoke they first met and coming out as transgender to their parents and family.

Hannah’s picture on a front-page story in 2015 caught the eye of Jake, who told a mutual friend that he thought she looked cute – before the pair starting talking.

Although Hannah said she was ‘terrified’ before their first date on London’s South Bank, the fact that Mr Graf was also transgender made things a lot easier.

Their relationship flourished and the pair got engaged when Mr Graf – who was in 2015 film The Danish Girl alongside Eddie Redmayne – proposed in New York. 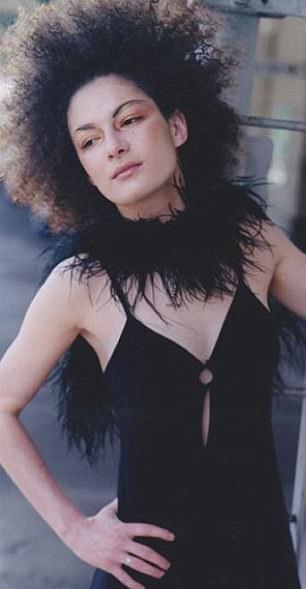 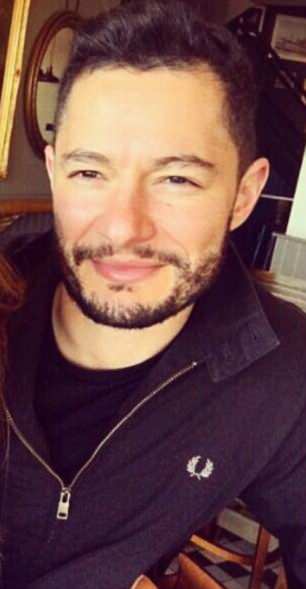 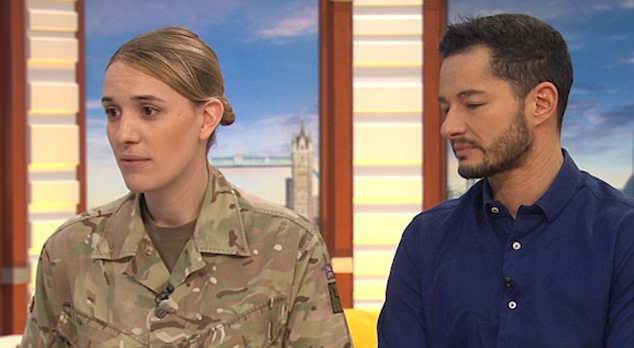 Jake, who starred alongside Eddie Redmayne in Hollywood film The Danish Girl, began transitioning in his mid-twenties having endured a hellish childhood 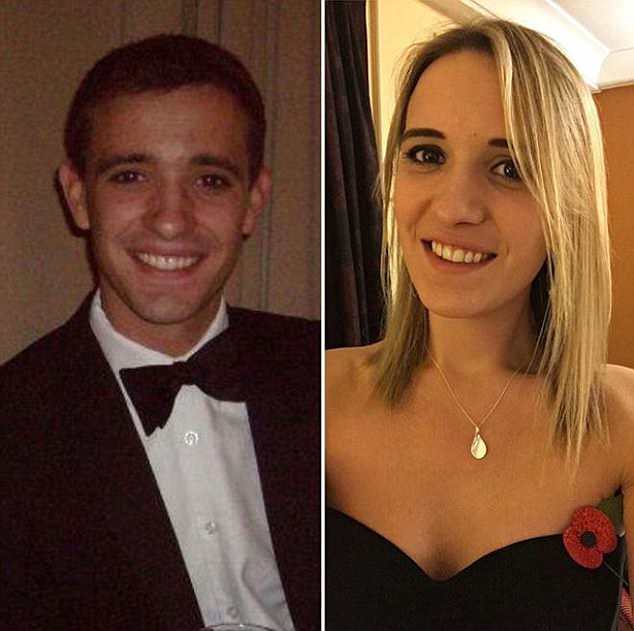 Hannah, pictured left before her transition, started the process four years ago after a tour of Afghanistan

Speaking about his childhood, Jake said: ‘I knew from two and a half to three years old that I was a boy and I was very vocal about it from a very young age.

‘It is always how I’ve been and I’ve just had to realign my body to how my minds feels and I think the same is true of Hannah.

‘We don’t want people to be walking around feeling like they are walking on eggshells or worrying about offending. Occasionally you’ll get it wrong and slip up.

‘My mother, for years, called me by my old name but it was coming from a place of love and quite often people want to get it right but don’t have the information.’

‘She said a year after me going through my transition that she did cry for her little girl for many months which obviously was heartbreaking but she has just been amazing and my own personal cheerleader.’

Hannah added: ‘Both sets of our parents were very happy, but it took several years for us to work through those processes and understand who we really are. 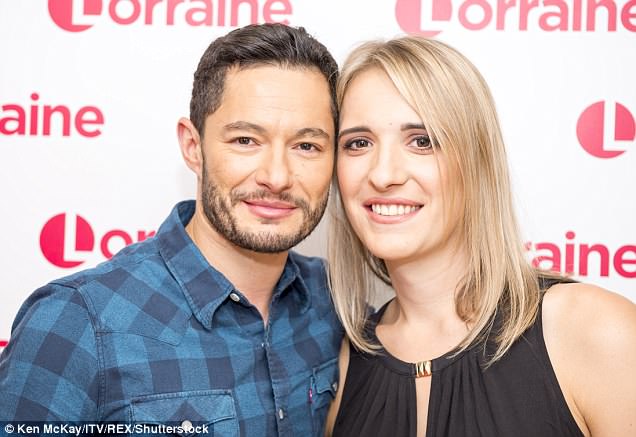 Britain’s highest-ranking transgender soldier, pictured with Mr Graf, said she thought love and marriage was a ‘pipe dream’ for her